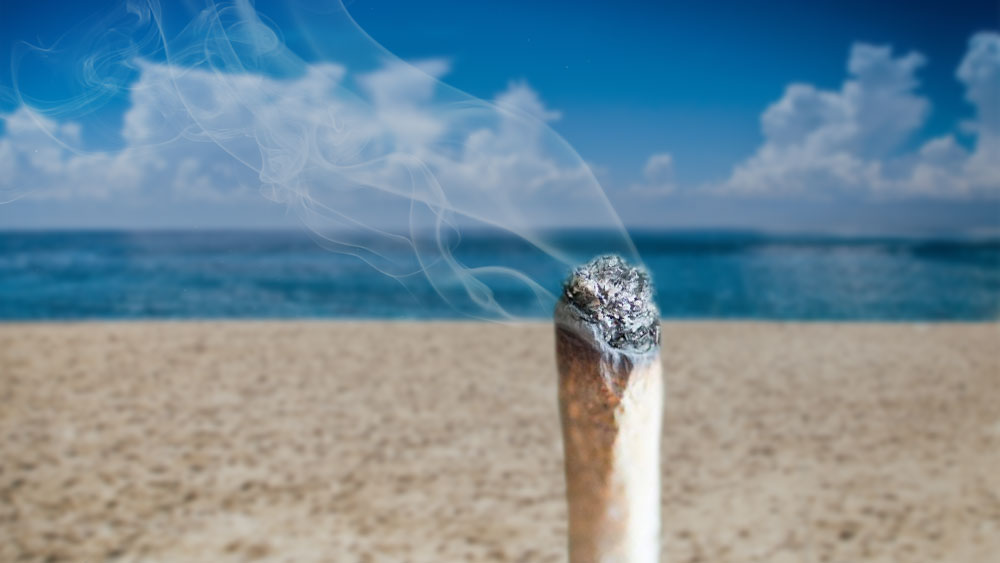 When I contemplate about the best places to enjoy some wonder-buds, pretty much the first thing that pops into my mind is:

“Is weed legalized (or decriminalized) in the country I’m planning to smoke in?”

This is such a game changer, when you have, or don’t have to think about law enforcement hunting you down like rabid dogs for a spliff or two. That’s why this is the first distinction we should consider before hitting the road.

On the other hand, the second thing to consider would be the location itself and whether it can be found easily anywhere. For instance, a forest or a beach or anything like that. Hopefully, outer space will also be an option in the centuries to come.

In light of all this I’m going to split this piece into three separate parts, so you can find what interests you the most more easily. And later on if you want to go back and read the piece in its entirety, I’m cool with that, too.

Places where weed is illegal (or semi-legal)

If you’re living in a place where cannabis is totally or partially illegal, I can’t in the right mind really propose any particular location, because you need to acknowledge a lot of variables, if you don’t want to get busted by five-o.

However, there are a few things you should consider.

First, if you’re planning to smoke outside (which I can’t really approve of, but if you’re a real pothead it’s going to happen a lot, especially if you’re younger and can’t really smoke at home), pick a place you’re familiar with, and make sure that you can easily spot anyone who’s approaching you.

This area shouldn’t have too many entry points. If it’s a park or something like that, find a bench that’s on the edge of it, so you can see who’s coming towards you, and properly react in a timely manner.

It’s pretty evident that smoking pot isn’t any goddamn crime. However, if it’s still treated as such, you should also act accordingly, and not go to prison or pay some ridiculous overpriced fine.

I would also suggest not to smoke in your car while driving. The potent smell will just remain there while the officer is taking your ID, and it’s going to be super tough to hide or throw away the weed you’re carrying.

So to sum it up, the best option you have is to smoke at home, or a friends/lovers/girlfriends/boyfriends house.

If you’re outdoors, make sure you have the entry points in your mind at all times.

Once you found a place where you’re going to blaze, don’t have the rest of the weed on you, but stash it somewhere.

Places where weed is legal

Once you don’t have the constraints of legality, the world is pretty much your oyster, and you can smoke almost wherever the hell you want.

This type of liberty can be confusing for some, but it definitely opens up possibilities that are non existent for those for those living in the countries where pot is still seen as a serious narcotic.

I’m going to name a few broad suggestions, hopefully there will be something for everyone. If you think of any other cool place that I managed to leave out, let your bruv know in the comments.

Because pot is a completely natural substance, and us humans are also a part of nature (even though it doesn’t really seem like that nowadays), the best place to get high would probably be some dope natural scenery.

It’s pretty hard to feel any kind of tension or anxiety when the sun is shining, everything around you is fifty shades of green. Plus, if there’s also some big water laying around, like a lake, river, sea, ocean, or whatever, that’s a total icing on the cake.

So if you have some reclusive natural spot in your area with not too many people jerking their iPhones around, I would say that’s the best possible setting to get yourself considerably faded.

This one is pretty much self explanatory, so I’m not going to specify it in too much detail. But, the primary basis is to watch a movie with some dazzling effects, not a depressing war drama (although even this type of genre could possibly become more interesting because of pot).

But I usually stick to my bulletproof tactics, which is a blunt before the movie, some butter-popcorns, and a crazy 3D blockbuster messing up my senses and causing me great bliss at the same time.

P.S. Horror movies are also quite neat if you’re into that type of thing. Just note that nowadays these new horror movies can be pretty f****** scary because of the top notch CGI stuff.

Riding a monster roller coaster can be a one trippy ride even if you’re straight, but with a bit of THC in your bloodstream things will get a lot crazier pretty quickly.

I know that some people aren’t really into these adrenalin rides. But, for those of us who are, this can be just so bloody amusing.

You probably shouldn’t get too high though, because a wonderful exhilarating ride can turn into a puking contest pretty easily.

Best places in the world where you should smoke weed

I also wanted to suggest a couple of states and cities around the globe which are just perfect for cannabis-tourism. So, if you’re planning a holiday and want to smoke some buds without attracting any unnecessary attention, these places should definitely be on your go-to list.

Since November 2016, cannabis is legalized for recreational users for everyone over the age 21, California has become heaven for any self-respected stoner.

The coolest state on the west coast doesn’t really require an introduction. So, if you’re planning to visit the states, this particular one should assuredly be your top choice.

Los Angeles and San Francisco are the top choices, of course. But, if you’re not in the mood for these crowded cities that are so many smaller awesome ones, like Santa Monica and San Jose for instance.

The capital of Portugal is a place where all drugs are decriminalized, which basically means that you can carry enough pot and smoke as much as you like (10 day supply is exactly 25 grams of weed, and 5 grams of hashish), without the police causing you any kind of trouble.

Dealing is strictly prohibited, so make sure you don’t sell anybody anything. This can make your holiday a living hell, and for a very stupid reason if I may add.

Hash is much more easier to find on the streets of Lisbon, and knowing someone who can connect you with a right person is always a good option, so be on the lookout for potential hustlers.

Barcelona is truly a wonderful city with so much cool stuff to see. Since the beginning of the 2000’s when the cultivation of cannabis stopped being illegal, it also became an awesome place to toke.

That makes this city an amazing destination for weed enthusiasts, but getting pot is somewhat unusual in Barca.

The way it works is that you have these private clubs who function on a “members only” basis, and you need to pay an entry fee which is about 20 to 30 euros, and after that you’re eligible to purchase cannabis.

These clubs are not allowed to advertise themselves, which means you’ll have to ask around in order to find a proper one near you. But the Spanish are pretty open people, so you’ll have no issues with getting that type of info in a jiffy.

While it’s still illegal to have recreational cannabis on you in Canada, the laws in British Columbia are extremely lenient for a casual pot-smoker.

In case you get busted with anything less than an ounce (28 grams), the fuzz will just confiscate it. In that case, just make sure to be polite in case that happens, because nobody likes an ass****, especially people with badges and guns.

Another great thing about Vancouver is that the weed you can acquire there is of excellent quality, because the majority of medical cannabis supplies for the whole Canada is grown in the province of British Columbia.

There aren’t any officials shops laying around, but it’s pretty easy to find a hookup, since there are just so many people in Vancouver who love weed.

This wouldn’t be much of much of a “best places in the world” list if I wasn’t going to include the weed capital of the world.

This destination naturally doesn’t come as a surprise for anyone. But it’s almost mandatory to include it in a round-up like this one since it’s the most popular safe haven for cannabis enthusiasts.

Coffeeshops (spelled together like this), are spots where you can legally buy 5 grams of weed per person, and you can also spark your joint in them, as most of them allow consumption on-site.

They can be found all over the city, and there are literally hundreds of them. So, finding some awesome strains definitely won’t be an issue in the majestic city of Amsterdam.