Skip to content
Home / Health / Is Cannabis a Good Option for Treating Asthma? 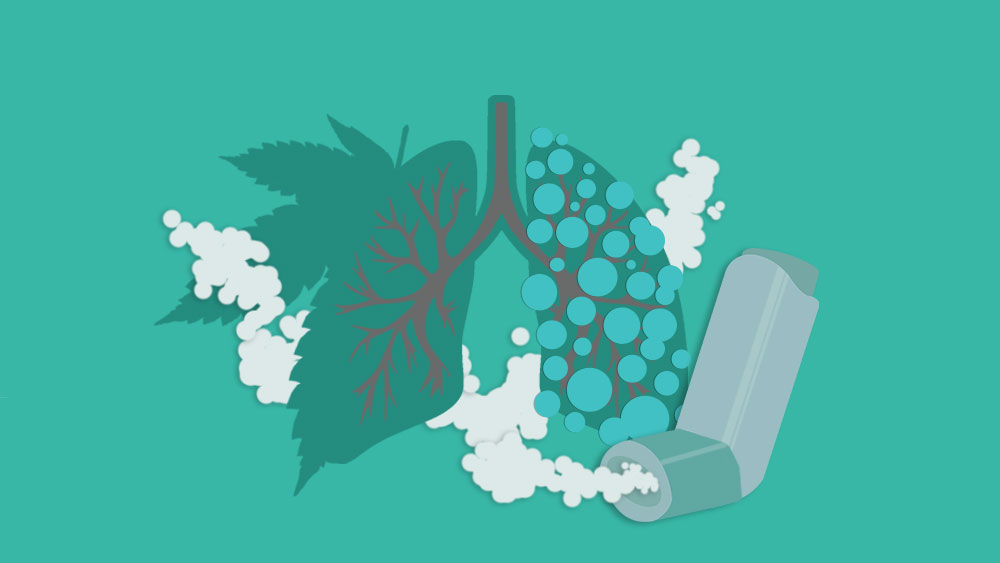 This might sound weird and ridiculous but contrary to popular opinion, cannabis can help asthma sufferers in many ways.

I couldn’t believe it myself when I first started researching this topic, but, as it seems, compounds found in cannabis can relieve certain acute and life-threatening symptoms of asthma.

When you think about cannabis, I bet the first thing that pops into your mind is smoking a joint.

Of course, smoking is most often associated with various adverse effects on our lungs, but there are many other healthier ways of administering cannabis.

For example, you could make delicious THC gummy bears and lollipops.

As I found out, cannabis and asthma have a three-millennia long relationship.

Around 1200 BC, ancient Egyptians used the herb to treat many conditions, including asthma.

More recently, and not so long ago, before cannabis was demonized and pushed into illegality, cannabis was used as a cough medication:

In the early 1920s, medical practitioners were allowed to prescribe cannabis, which resulted in tinctures being one of the preferred additions to cough medicines—since they didn’t make patients depressed and constipated (as morphine did). (2)

Cannabis prohibition started soon after, and the tobacco industry expanded to unimaginable heights.

When the lung cancer-tobacco link was discovered, smoking (especially weed) started being labeled as very dangerous for everyone, even more so for people suffering from respiratory diseases.

Recently, thanks to new clinical research, the link between cannabis and asthma was inspected in greater detail.

In this article we’ll investigate the science behind using cannabis with asthma, patients’ experiences with the plant and the best methods to get medicated if you’re suffering from asthma.

Asthma is a chronic, long-term inflammatory disease of the lungs, which affects the airways.

Genetics usually play a major role in developing this condition, but a lot of things can irritate the airways and trigger an asthma attack, like: 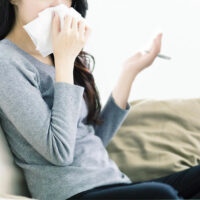 Smoking Weed With A Cold: Beneficial or Harmful?

All those stimulants cause obstructions and spasms in the irritated and sensitive airways. And that’s when the symptoms start to appear:

The disease affects people of any age, but usually, the first symptoms start to occur in early childhood.

Interestingly enough, boys are more likely to develop asthma than girls, but adult women are more prone to getting asthma than adult men. (9)

Also, young adults between the ages of 18 to 24 are more likely to be diagnosed with the condition than older adults.

Because of all the pollution in the air and an ever-growing variety of allergens, it’s no wonder that the number of asthma sufferers is on the rise since the ‘60s, increasing by 15% in the last decade.

Sadly, there is no permanent cure for this condition, but there are a few types of treatments to keep it under control.

Usually, asthmatics have an inhaler with them at all times, because an asthma attack can happen just about anytime.

There are two types of inhalers, preventers and relievers.

Logically, preventers are used regularly in order to prevent the airways from becoming sensitive.  Reliever inhalers are used to control the acute symptoms when an asthma attack happens.

Usually, if patients avoid things that trigger their symptoms and take their medications regularly, keeping the condition under control is not an issue.

However, asthma is persistent and can be very frustrating and exhausting. Conventional medications are not so perfect for the health in general since they contain steroids and immunomodulators with a lot of side effects.

That’s why many patients are looking for a more durable and less-harmful solution.

Asthma is a chronic inflammatory lung disease. There’s is no permanent cure for it, only a few types of treatments to keep the condition under control.

My question is how does cannabis compare to mainstream pharmaceuticals used for treating asthma?

The research on cannabis use in asthma patients

Discovering the link between cannabis and asthma started back in 1975 with one small and very simple research.

A group of researchers led by Dr. Donald Tashkin artificially induced bronchial spasms in eight “clinically stable” asthma patients, focusing on the behavior of their airways.

In different sessions, spasms were induced through methacholine inhalation and by aerobic exercise.

Patients were then administered either placebo or actual cannabis with 2% of THC.

Placebo subjects recovered from bronchial spasms in 30 to 60 minutes, on average. Subjects who were given 2% THC cannabis were relieved from spasms almost immediately. (3)

This was a revolutionary discovery at the time with all the stigma around cannabis and smoking with asthma.

In March 1985, a 20-year-long study was initiated and it concluded that moderate cannabis smokers who were diagnosed with asthma improved their lung function without suffering the lung damage, when compared to cigarette smokers. (4)

With all these anecdotes circling around about cannabis stopping asthma attacks, it was obvious that the time had come to prove that cannabis is a bronchodilator.

In a 2014 study, researchers isolated bronchi samples from 88 participants, both from healthy subjects and asthma patients. They induced bronchial spasms by electrical stimulation and then administered THC as well as some other, synthetic cannabinoids.

Cannabinoids (THC to be precise), activated CB1 receptors, which stopped the spasms and dilated the organs. (5)

In layman terms, the most psychoactive substance in cannabis expanded the airways, making it easier for air to get into the lungs.

At that time it was obvious—compounds found in cannabis can quickly stop an asthma attack because patients can feel the effects of cannabis almost immediately.

After years of research, one thing was getting ever more clear: THC was winning over CBD in this race.

CBD is known as a great anti-inflammatory agent and has been stealing the attention of users, medical experts and scientists in the last 5 years.

THC has been underrated in the past few years because of its intoxicating effects.

I found a study from 2015 which reminded me of THC’s medical value. Although it was an animal study, it made some very important conclusions and provided a strong base for further research.

They wanted to find out if those cannabinoids would stop the constriction of the airways caused by inflammatory proteins.

It was surprising to see that only THC and THC-V inhibited contractions, other cannabinoids didn’t, including CBD.

In fact, THC had a much a stronger effect than THC-V, which actually blocked CB1 receptors inducing some negative effects. (6)

Cannabis proved to have bronchodilator effect on the airways.

As you can see, all these studies prove that cannabinoids from pot are not so bad for asthma patients as we originally thought.

However, until we have more conclusive evidence and a scientific consensus on this topic, take the above findings with a grain of salt.

Which brings me to another point:

Compounds from cannabis are not bad for our lungs, however, smoking is—even though cannabis smokers don’t suffer from lung cancer as much as tobacco smokers. (7)

Unfortunately, we have substantial evidence that smoking should be avoided and one particular study from 1998 found that young healthy adults who smoke cannabis regularly are more likely to have lung inflammation, just like tobacco smokers. (8)

So, if you just want to get high, or manage other conditions you might be suffering from (like anxiety or ADD) there are other ways to enjoy weed and get the best from it.

Edibles are a safe and healthy way for asthmatics to enjoy cannabis.

Just Google and you’ll find tons of recipes for pot brownies, biscuits, candies and many, many more.

Cannabutter is a base for every pot cake and it’s really easy to make, so you can experiment with different ingredients as much as you want.

However, be careful with edibles because it’s actually really easy to take a lot more than you can handle.

Edibles are metabolized in the digestive system and they take up to 45 minutes to start producing effects (compared to smoking, which produces effects almost immediately), but the high from edibles is both longer and stronger.

It’s a frequent mistake for inexperienced cannabis users to take more edibles before they start feeling the initial effects, but by then it’s too late: they get too high and might not feel very well.

Don’t worry, because no matter how high you get, you can’t overdose and die from weed. You might get an anxiety attack or become paranoid, but it will all go away after a few hours.

And how can an edible help asthma patient?

Since it takes longer for cannabinoids from edibles to enter the bloodstream, this way of consuming pot probably won’t stop an asthma attack.

However, if you use edibles on a regular basis, it can help you prevent an asthma attack, just like it did for subjects in the abovementioned studies.

Smoking is not the only way to use cannabis. You can also vape, make edibles or cannabis tea.

What do other asthma sufferers think about smoking cannabis?

We explored what science has to say on this topic, but what about real patients? How do they feel about smoking cannabis with their condition?

For me, the best way to find out what’s really going on is to go to Reddit and find some threads like this one where real people share their own experiences.

In this instance, the experiences of asthma sufferers seem to be divided. 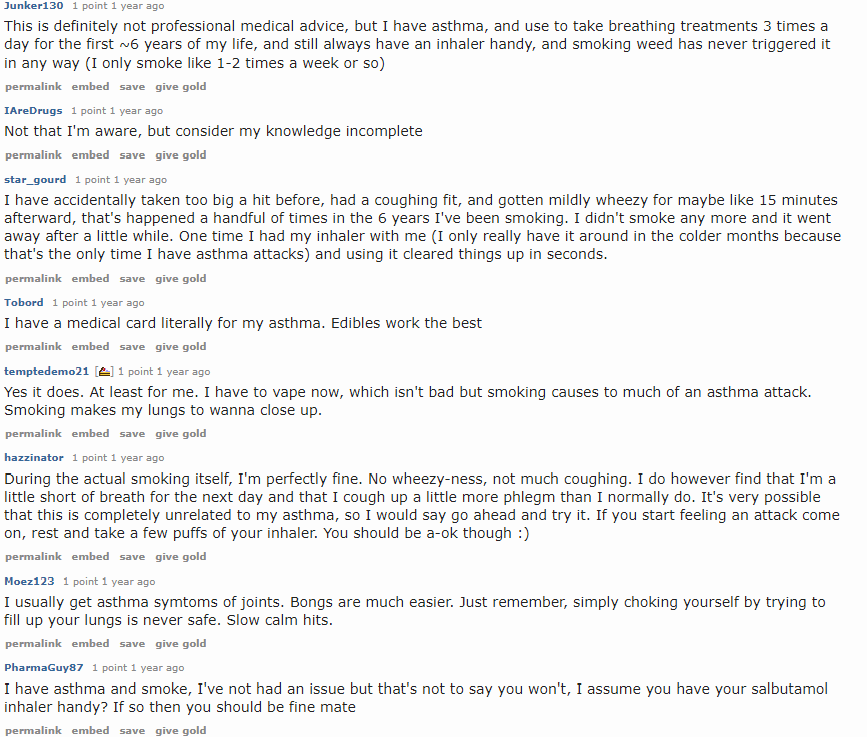 If you are suffering from asthma and you’re still using cannabis, feel free to share your experiences with us in the comment section below.

6 thoughts on “Is Cannabis a Good Option for Treating Asthma?”