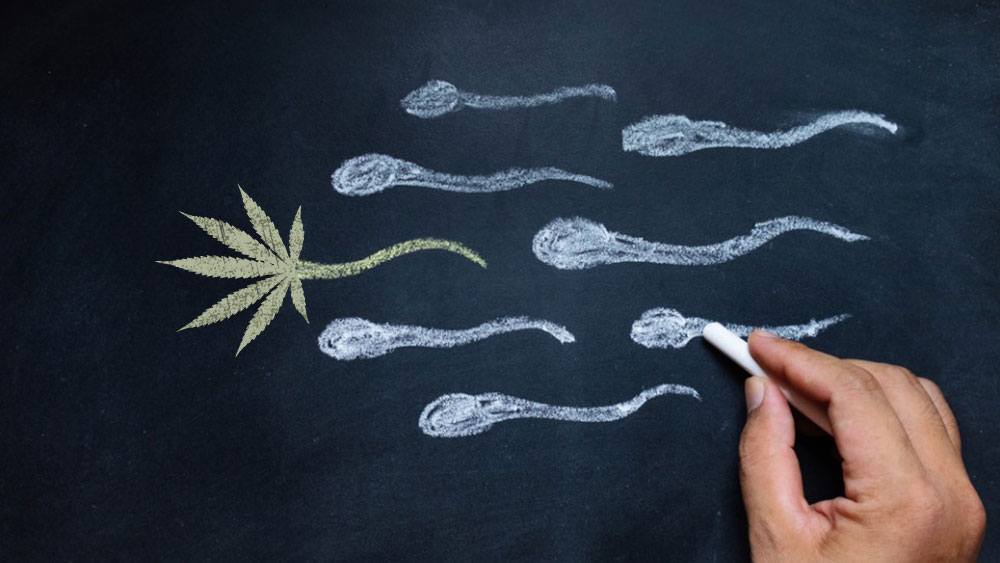 When we look at the available hard facts, it quickly becomes evident that cannabis may be indeed connected with lowering the sperm count and can even influence some rather erratic behavior in the remaining “swimmers”.

The science of stoned sperm

When it comes to the science of cannabis versus sperm, the biggest obstacle lies in the general lack of knowledge on the subject, as the effects of cannabinoids on the spermatozoa are still widely unresearched, and because of this not yet fully understood.

In the meantime, while we’re waiting for the scientists to figure out how exactly cannabis does what it does to sperm, there are several studies from which we can draw some direct conclusions.

I’m going to summarize for you all the most important ones currently available, with links that lead to each individual study, respectively.

Each of these studies was conducted in a different country, and they mostly focused on a specific aspect of the cannabis-sperm correlation.

This research was performed on the semen of 22 frequent cannabis users, who reported using pot at least 14 times a week, over a period of approximately 5 years, and also on the samples of 59 fertile non-users who already had biological children.

The study concentrated on the swimming ability of sperm cells when influenced by cannabinoids, and the results showed that the spermatozoa from frequent canna-consumers timed their swim irregularly, which ultimately caused the cells to prematurely lose too much energy, and subsequently fail to reach the female egg cell. (1)

In a completely different study, scientists from the same university also figured out that the sperm cells contain cannabinoid receptors (2), which reveals that naturally occurring internal endocannabinoids like anandamide play an important function in our reproductive system, beside many other things, like the regulation of the immune system, activating (or inhibiting) inflammation, neurogenesis and much more.

The cannabinoid receptors located on the sperm cells also give us some insight into how pot causes sperm to act differently, even though the definite process of what exactly happens is still far from our comprehension.

The team from the University of Buffalo discovered that frequent cannabis consumption causes sperm cells to behave erratically, making them burn excessive amounts of energy too quickly.

In this newer study from last year, Canadian researchers led by Dr. Victor Chow (who’s an associate professor at the University of British Columbia Medical School), found that frequent cannabis consumption leads to a fewer number of sperm cells (the so-called sperm count), and that the remaining cells of the individuals who frequently consume cannabis also tend to perform atypical motions, causing them to swim in circles rather than the usual straight-line path towards the ovum. (3)

It should be noted that even in perfect conditions (without any negative outside stimulants), a large percentage of spermatozoa will always exhibit erratic behavior, and will be shaped unusually. 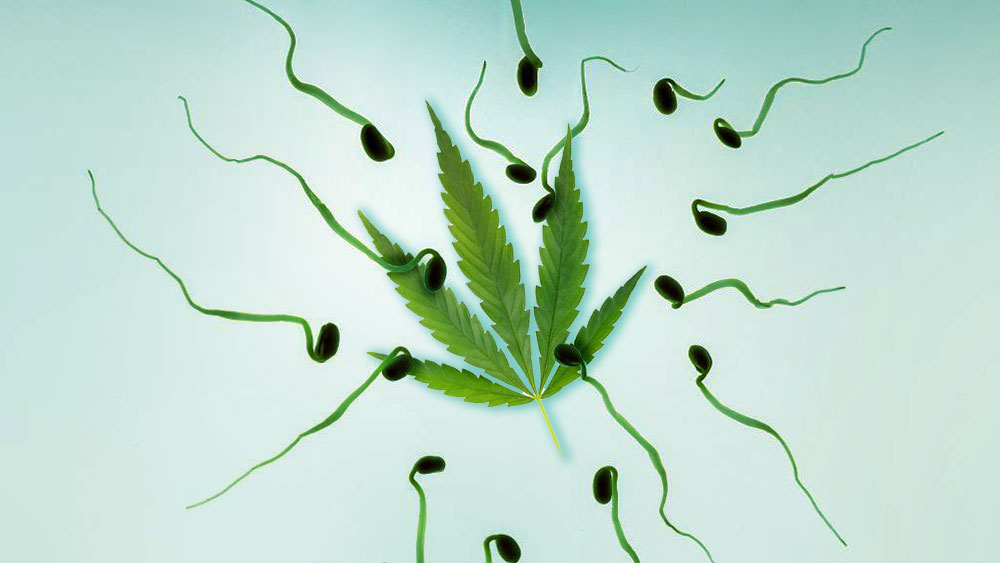 The researchers also added that the sperm count was decreased by approximately one third in most subjects tested.

They advise that if you’re experiencing difficulties while trying to conceive a child, you should lay off cannabis for around three months’ time; the male body creates new sperm cells roughly four times a year, and unlike spermatozoa, it produces other nutrients and enzymes that the semen contains on a regular basis.

Continual cannabis use lowers the sperm count by approximately one third, and studies point out that a person has to abstain for about three months for the effects of cannabis to be fully reversed.

During the period of four years (2008-2012), Danish scientists took samples from 1,215 men (18 to 28 years of age) and interviewed them about their cannabis habits in the previous three months.

The scientists also inquired about the use of harder narcotics including cocaine and amphetamines like MDMA and ecstasy, also in the last 90 days prior to the testing.

If the subject reported that he consumed cannabis (or combined pot with heavier opiates), he was asked to scale the frequency of his use, ranging from once a week, to multiple occasions during one week.

The results were insightful, as 45% of the 1,215 men reported that they consumed weed within the last three months, and around 10% combined it with other substances during that period.

For the men who used cannabis regularly (multiple times a week), the sperm count was lessened by 29% (compared to the examinees who reported less frequent use, or total abstinence), and for those who used other opiates (and marijuana), the number was a whopping 55% decrease in the overall sperm count. (4)

The team in charge of the research also took into consideration that there is a large possibility that lifestyle choices, such as alcohol consumption, cigarette smoking, caffeine intake, less exercising and so forth, differed greatly between the examinees who were consuming cannabis regularly, and those who did not.

All these factors can naturally lessen the fertility (and the general well-being) of an otherwise healthy individual.

For participants who reported using cannabis multiple times a week the decrease in sperm count was quite significant, as much as 29%.

In this particular study scientists observed samples from 1,970 men obtained from various fertility clinics across the UK.

At first this study didn’t focus on the cannabis aspect, but rather how various habits which include alcohol, cigarettes, exercise, weight (and the body-mass index), history of medical issues, and even the type of underwear worn all influence the quality and quantity of sperm cells.

The researchers were interested to find that from all these habits and factors, only one was closely connected with unusual sperm morphology, or in layman’s terms how the sperm was shaped, and what size it was.

Out of 1,970 men, 1,652 provided “proper” sperm samples (which means that around 4% of their semen was the appropriate shape and size).

The remaining 318 samples were deemed as abnormal, and when researchers started to look for patterns in the habits of the tested men, cannabis became the prime suspect.

Because the questioning wasn’t precise enough at the beginning of the study, scientists could only determine that if a testee was using cannabis three months before ejaculating, there was a great chance of morphological abnormalities in their sperm. (5)

As I previously mentioned, the exact mechanism of how exactly cannabis causes these changes in sperm is still heavily uninvestigated and therefore practically unknown, but some animal testing seems to point to a possible conclusion, says Allan Pacey, who’s the senior lecturer of Andrology at the University of Sheffield, and one of the main researchers involved in this study.

“I do know there is some work in laboratory animals that suggests [cannabis] can affect the way the DNA in the sperm is packaged together, and that’s significant,” Pacey says.

“When sperm are made, the DNA they maintain has to be packaged in the head very tightly, and when that process doesn’t work properly, you get an abnormal sperm. So the cannabis is maybe interrupting that DNA folding.”

The team of scientists concluded that if a testee was consuming cannabis three months prior to the testing, there was a great chance that the form and structure of sperm cells will be significantly affected.

Now that we covered all the essential studies on this subject matter, I wanted to share with you some sperm-fundamentals so to say, just so you can have a clearer picture of what exactly is going on down there, and also because there’s a ton of fascinating stuff about these little guys.

Semen is not the same thing as sperm

Even though they’re very closely connected, sperm cells are just a small part of semen, which is also known as seminal fluid.

Only 5-10% of seminal fluid consists of sperm cells (which are also known as spermatozoa). The other 90-95% is comprised of nutrients, fructose and various enzymes that are there to ensure the survival and health of sperm cell.

These components also act as a means of transportation for the spermatozoa, making it possible to “swim” towards the female egg cell.

Human testicles are designed (by evolution, just to be clear), to be around 7 degrees colder than the rest of the body. They act as a cooling system for the sperm cells, keeping them in mint condition.

This is achieved by specific veins that draw the heat away from them, and the scrotum also has muscles that lower (or lift) the testicles depending on the current temperature conditions.

Because a single sperm cell only contains half as much DNA in comparison to other male cells, the immune system sees them as a threat.

Evolution of course took care of that, and men have specialized protective cells that create a secure layer around the sperm cells, and by doing this preventing the immune cells to cause any harm to them.

Abstinence from orgasms is bad for the sperm

When semen is stored in the testicles for extended periods of time, sperm cells are exposed to various substances (reactive oxygen species, leukocytes etc), and these substances ultimately lead to oxidative stress, which is also closely connected with many diseases like Parkinson’s, Alzheimer’s, cancer, sickle-cell disease, autism, depression and ADHD.

One study showed that men who ejaculate 4 times a month (or more), have much better sperm morphology than the ones who don’t. (6)

Sperm likes its landlord to be fit and healthy

For the maximal potency and well-being of sperm cells, men should take simple but effective steps to ensure their health.

These include eating properly, maintaining your body weight, avoiding tobacco, cannabis and other malicious substances like alcohol. Heavy opiates are of course included in this list.

They are also sensitive to heat as I already mentioned, so take it easy on the saunas, jacuzzis and hot baths if you’re trying to conceive.

The study, which was published in Fertility and Sterility Journal in 2012, showed that the electromagnetic waves emitted from WiFi devices act as free-radicals which cause oxidative stress to sperm cells, causing issues with mobility, damage to the DNA inside the sperm cells, and even cell death (7)

To prevent any serious problems, don’t hold your laptop on your lap, and avoid holding your phone near your pelvis as much as you can.

Now that we have all the necessary information, we can conclude that spermatozoa are extremely delicate cells, negatively impacted by a wide array of outside factors, and unfortunately cannabis is one of them.

7 thoughts on “Cannabis and Sperm: Does Pot Impede Male Fertility?”