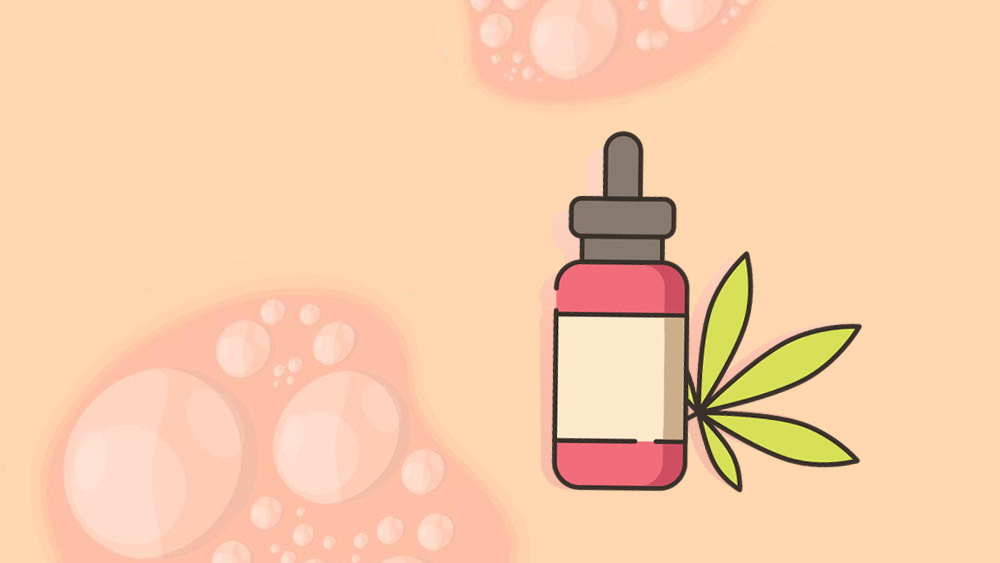 Though CBD can’t really cure shingles (herpes zoster), there is evidence suggesting that it can alleviate nerve pain associated with the disease.

A large percentage of shingles sufferers develop postherpetic neuralgia (PHN), a painful debilitating condition resulting from the damage of peripheral nerves caused by the viral rash.

Pain caused by postherpetic neuralgia can last anywhere from several months to several years for some people.

We’re going to go over the studies pointing to the beneficialness of CBD for various types of pain, primarily neuropathic (caused by damaged nerves) pain, which is extremely difficult to treat.

It’s important to mention that the delicate legal status of hemp/cannabis continues to hinder CBD research, and the majority of studies are still in preclinical stages.

Studies on CBD and Pain

A 2006 study stated that regulating the endocannabinoid system (a cellular system in our bodies through which CBD and other cannabinoids produce the majority of their effects), is potentially beneficial for an exceptionally wide range of conditions and disorders.

Here’s an excerpt from the study:

“Modulating the activity of the endocannabinoid system turned out to hold therapeutic promise in a wide range of disparate diseases and pathological conditions, ranging from mood and anxiety disorders, movement disorders such as Parkinson’s and Huntington’s disease, neuropathic pain, multiple sclerosis and spinal cord injury, to cancer, atherosclerosis, myocardial infarction, stroke, hypertension, glaucoma, obesity/metabolic syndrome, and osteoporosis, to name just a few.”

A 2007 research concurred that CBD shows efficacy for neuropathic pain, stating that “the results indicate a potential for therapeutic use of cannabidiol (CBD) in chronic painful states.”

“Collectively, we have provided evidence to suggest that glycinergic cannabinoids are ideal therapeutic agents in the treatment of inflammatory and neuropathic pain. They can effectively attenuate pathological pain without significantly causing major psychoactive side effects and analgesic tolerance.”

How Much CBD Oil for Shingles

There are two important aspects to every CBD treatment:

While most users immediately feel the effects of CBD, some people need to consume CBD for a brief period of time (usually weeks, sometimes even longer) in order to start noticing the benefits.

This difference in people is, unfortunately, still poorly understood but there are some solid scientific hypotheses.

Since the mechanism through which CBD creates its effects is dysfunctional, no noticeable effects can take place.

But, the current understanding is that through regular exposure to cannabinoids like CBD the endocannabinoid system “restarts”, and gradually becomes functional again.

Because of this, it is advised to continue with a CBD regiment even if you don’t feel any immediate effects, so your body could renew the endocannabinoid system.

Again, this is only required for a small percentage of users.

Regarding the actual dosing, most users find relief with intermediate doses, ranging from 15mg to 20mg of CBD.

This, of course, isn’t written in stone, meaning some users will experience immediate relief with smaller doses, while others will require more CBD to achieve optimal alleviation.

It’s best to start with a medium dose and see how you’re feeling.

If you experience any adverse effects (we’ll get to that a bit later in the article), feel free to lower your dose and evaluate the effects.

If you feel that a bigger dose would offer greater relief, increase your intake to 40mg or 60mg of CBD.

Studies have shown that CBD is very well tolerated in humans, and huge doses up to 1,500mg per day are considered safe.

How to Use CBD Oil for Shingles

The most important difference between CBD oil and CBD capsules is that CBD oil starts working faster (within minutes), while CBD capsules have to pass through the digestive tract, and take 60~120 minutes to begin.

If you’ve used CBD oil (or capsules) a couple of times and no apparent effects occurred, avoid increasing the dose but continue to use the product regularly, in order to “kickstart” your endocannabinoid system.

Due to differences in age, health, unique genetics and other currently unknown factors, a small percentage of people experience some side effects from CBD use, while most users consume it without any issues.

Luckily, the adverse effects of CBD cannot be considered too debilitating, and they include:

Since the science of CBD isn’t completely understood, the only way to know whether you’ll experience some of these side effects is to try using CBD.

If you’re using any prescription or over-the-counter drugs, it’s essential to understand that CBD interferes with any medication that is metabolized by the CYP3A4 enzyme.

These drugs usually have a grapefruit warning (grapefruit juice also interferes, just like CBD) on their packaging, but to be extra safe you should always check the insert information for any mention of this enzyme.

In a nutshell, CBD interferes with these medications because it’s also metabolized by the CYP3A4 enzyme, which means that the enzyme is working to break down both substances at the same time.

This could lead to elevated levels of both substances in the body, which could be potentially hazardous.