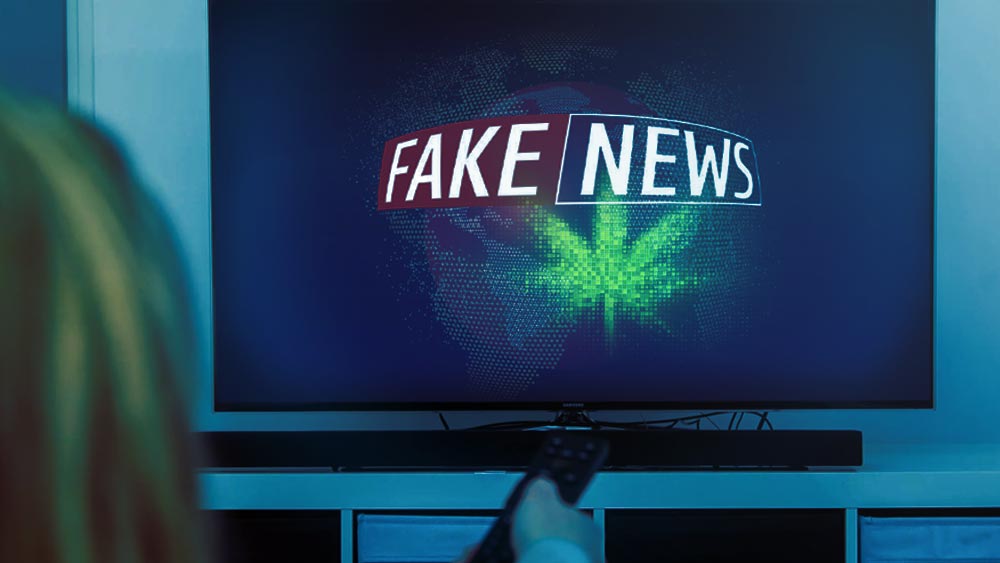 It seems infodemic – an excessive amount of (unreliable) information – is not a new thing in the cannabis industry.

Do you believe that marijuana kills the coronavirus? Or that it cures cancer? If not, do you think cannabis causes schizophrenia?

Obviously, those are tough to answer.

How about believing that marijuana makes your tongue green? Or that it provokes breast growth in the male population?

But the fact that these questions exist leads to a single conclusion – the green industry is a fertile ground for making dubious claims. Hence, we should read the “cannabis news” with one eye on everything that’s going on behind the scenes.

What Is Fake Cannabis News?

While misinformation is shared accidentally (maybe a reporter makes a mistake), disinformation and malinformation are shared deliberately, the latter with malicious intent.

Peter Marcus, a former renowned Gazzete reporter who is now the communications director at Terrapin, a Boulder-based national cannabis company, says that in the cannabis sector there usually exists an intention to deceive others.

For him, “fake” is defined as something “built in rhetoric, not fact.”

“For example, when Alex Berenson makes claims that marijuana is linked to psychosis, but dozens of researchers write a letter saying he has twisted the facts, that is fake,” he illustrates.

And although many of us are starting to identify hoaxes with news outlets, he claims that the cannabis industry has more serious issues with “fakeness.” That’s why TheNewsStation.com targets not news outlets, but people who are quoted by them, he said.

“Researchers, pundits, opposition groups — organizations like SAM — which produce press releases and misleading studies to fulfill a prohibitionist agenda. By correcting the record on these misleading campaigns, we are hopefully adding context for news outlets, individual journalists, and the general public. It’s targeted at fake assumptions that could turn into fake news or has already turned into an inaccurate media report,” noted Marcus.

Putting things in perspective is of key importance, he continues. It’s not a matter of speaking for the cannabis industry.

“There are plenty of well-informed trade groups for that. The News Station instead offers cannabis-related current events with an accompanying perspective to highlight the significance,” he concluded.

If you asked Peter Marcus, the ability to push talking points is prolific and comes from both sides. We see prohibitionists and opponents claim whatever they want and call it fact, he observes.

There is, however, a difference in quality and quantity of fake cannabis news produced by those looking to make pot illegal again, he notes.

“We’ve seen them continue to claim that marijuana leads to a spike in teen use. Study after study shows that is not true. We see them claim that the marijuana industry advertises to children and that people drug kids with it. The industry actually supported restrictions on packaging and labeling to not appeal to kids. They’ll claim that marijuana causes psychosis. Researchers across the world say there is no conclusive evidence there,” explained Marcus.

“There’s almost no effort at all. They’ll just drum up a social media post, or fabricate a study, and peddle it as news, without even putting in much of an effort. That’s a symptom of the times that we live in,” he concluded.

But there is, of course, another side of the medal.

“The worry is that all the online chatter about cannabis’ beneficial qualities will have offline consequences, ultimately influencing attitudes and behaviors,” said Patrick Allem, assistant professor of preventive medicine at the Keck School of Medicine of USC and lead author of the study.

Bots or people, the same mindset is probably behind the latest hoax that weed “kills coronavirus”, which goes in line with the “Coronavirus Protocol” some dodgy CBD companies are trying to sell.

In other words, disinformation and malinformation can come both from cannabis evangelists and prohibitionists. The reason in both cases is usually shady and associated with financial gain.

It’s one thing when Canadian police officers are advising Catholic high school students not to smoke pot because it can make them grow “boobies.” Aside from the police’s complete embarrassment, there are no serious consequences of this false claim.

But when cops are pulling people over for having a green tongue that they associate with marijuana use – that’s a completely different story, Marcus argues.

“Cops believe this is true because of misinformation spread by legalization opponents. In this case, it had a powerful impact, as people found themselves facing questions from law enforcement. We felt it was important to shine a spotlight on the issue to roll back archaic DRE exams that have no basis in reality,” he said.

However, the ridiculousness absolutely vanishes when you have Hamilton County Coroner Dr. Lakshmi Sammarco, who reports that synthetic opiates like fentanyl have been found in marijuana.

The claim is “fear-mongering”, and spreading such inaccurate information makes it less likely kids and teens will take legitimate warnings about drugs seriously, argues Dr. Ian Mitchell, an emergency physician at Royal Inland Hospital in British Columbia and a consultant at Medical Cannabis Resource Centre.

The same goes for unsubstantial health claims – they are diluting solid science and hurting the industry’s cause in general.

“It doesn’t just work for opponents. We also like to hold the industry itself accountable. Honesty and transparency is the only reason this experiment has worked,” concluded Marcus.

But just how can a handful of plain old lies hold such power?

The experts are unanimous on this one – we are consuming news (or whatever content), not reading it.

“All of this is happening during a time where we can create anything that ‘looks’ legitimate, and our trust in the “traditional media” is at an all-time low.  So there’s a vacuum of sorts, where all kinds of fake info can enter,” explained Smith.

Also, it’s easy to find anything online that “backs up” a claim. We’re more likely to check the first thing that comes up in Google search regardless of the source, and those algorithms can be manipulated, she adds.

In a word, we are blunt consumers of what’s served on the internet. Shares and likes are the only statistics that matter.

“There’s a concept called “performative sharing” where people share things without checking for validity because they want to be seen as “the first” to know/share it”, Smith emphasized.

Then there’s the issue of “selective checking”, she adds, when we don’t check the messages that we like or the ones that affirm our already-held beliefs. So, a Trump supporter will basically believe anything good about him without fact-checking, and a Trump hater will likewise believe anything bad about him, she depicted.

“Basically, it’s a perfect storm where disinformation and misinformation travel at the speed of light, and nobody cares, as long as they like the message,” concluded Smith.

What Can You Do About It?

“It’s really important that people check the source of their news. Social media has been doing a better job these days of highlighting fake news, but people must remain vigilant. Media does its part cutting through the spin and boiling it down to facts,” Marcus notes.

He suggests doing a little background check on the people peddling the misinformation and grasping the full context.

“For example, when you see Smart Approaches to Marijuana issue a press release, check out the background of the organization. Take note that it was founded by Patrick Kennedy, a former congressman who made his money in the Pharma industry before switching to investing in the drug rehab industry,” he illustrated.

Julie Smith likewise recommends source checking, lateral reading, but also asking yourself “what biases you bring to the equation.”

Try to answer these basic media literacy questions, she suggests:

●     What lifestyle is represented?

●     How could someone else interpret this message?

Last but not least, remember the golden rule, Dr. Mitchell told High Times: “If it sounds too good to be true, it probably isn’t true.”