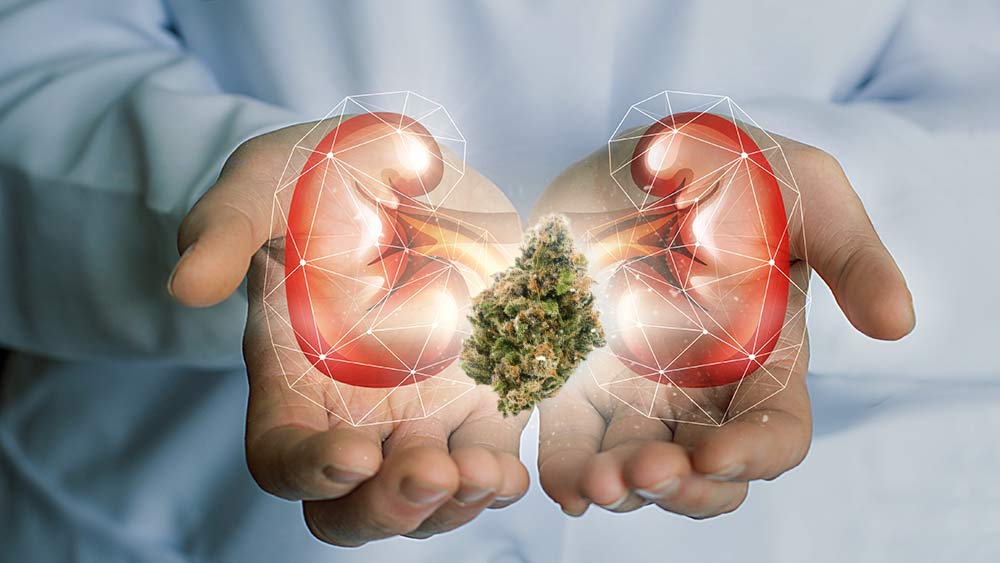 The effects of cannabis on various kidney disorders like CKD and AKI have been the subject of numerous scientific studies, but they are yet to be closely observed on humans.

So far, we’ve seen several scientific studies and reviews offering their (somewhat opposed) opinion on the effects of cannabinoids on kidneys, which still provides valuable insight for anyone who’s looking to implement cannabis as a potential therapy agent.

What is certain thus far is that kidney cells have (endo)cannabinoid receptors, which makes these cells susceptible to alteration by both our internal endocannabinoids, and the cannabinoids from cannabis, which are structurally very similar.

The prime function of the ECS is to maintain physiological balance within an organism. Through this complex mechanism the chemical compounds from cannabis are utilized to positively influence a multitude of different conditions, diseases and disorders.

In order to give you a detailed account of the connection between marijuana and kidney disease, we’ll be going through five scientific works one at a time, making sure we point out the differences in their observations.

Is there a legitimate role for the therapeutic use of cannabinoids for symptom management in chronic kidney disease? (1)

The review from 2011 published in the Journal of Pain and Symptom Management was contending that cannabinoid-based therapy for pain can be considered as a valuable alternative to opioids for patients suffering from chronic kidney disease (CKD).

These symptoms include nausea, anorexia, insomnia and pruritus (severe itching of the skin).

The adverse effects resulting from the use of opioids significantly impact the patient’s already diminished health-related quality of life (HRQL).

The authors of this review were evaluating the basic science and clinical literature on cannabis to determine whether it could be utilized for the management of symptoms in CKD patients (especially pain), while acknowledging the psychotropic effects of THC and the overall potential for abuse.

The review concluded that cannabis definitely has a therapeutic potential for symptom management, primarily acting through CB1 (THC) and CB2 (CBD) receptor agonists.

A receptor agonist is a chemical compound that binds to a specific cell receptor, activates it, and produces a biological response from that specific cell.

In this particular case, THC and CBD are both receptor agonists, but each of these cannabinoids binds to a different receptor type.

Cannabinoids and the kidney: effects in health and disease (2)

This review from 2017 was published in the American Journal of Physiology (Renal Physiology).

Authors of this review concurred that both CB1 and CB2 receptors are present in the kidneys, which are activated by the cannabinoids found in the cannabis plant.

However, they add that the stimulation of these receptors by cannabinoids can have both positive and negative effects on the kidneys, and the result is dependant on several factors, including:

These researchers have also stated that the exact mechanism by which CB1 and CB2 receptors are involved in the pathology of kidneys is not yet properly understood.

They think that advancing our understanding of the connection between cannabinoids and the renal system could lead to the development of novel medications, potentially capable of treating various kidney diseases and conditions.

The authors conclude that more clinical research is necessary in order to clarify the complex physiological effects of cannabis on the renal system, and that some experimental studies show that the cannabinoids potentially have important effects on kidney function.

This scientific review is from 2018, published by the International Society of Nephrology.

The research team acknowledges the presence of CB1 and CB2 cellular receptors in the tissues of kidneys, and states that these receptor sites can be influenced by both the internal body-produced endocannabinoids (such as anandamide and 2-AG), and cannabinoids from cannabis.

They state that the connection between cannabinoids, cannabinoid receptors and the renal system received little attention from the scientific community in the past.

But, recent animal studies involving cannabinoids and the endocannabinoid system (ECS) showed protective effects on the renal system, which raises hope for future application in humans with kidney-related issues and diseases.

A review of cannabis in chronic kidney disease symptom management (4)

This scientific review from 2019 was published in the Canadian Journal of Kidney Health and Disease.

The review was investigating several key clinical studies that deal with the relationship of non-synthetic (naturally-occuring) cannabinoids and CKD (chronic kidney disease), and looked into the potential of natural cannabinoids to treat the numerous symptoms associated with CKD.

The research team mentioned that based on the studies performed on patients that don’t have renal impairment (their kidneys were functioning normally), those who were treated with non-synthetic cannabinoids were 43% to 300% more likely to report a ~30% reduction in chronic pain, when compared to a placebo.

They also noted that according to preliminary investigations for the treatment of uremia-induced pruritus, topical cannabinoids appear promising.

The researchers also stated that any benefits of cannabis could be offset by potential negative effects of cannabis use, including cognitive impairment and orthostatic hypotension (the significant fall in blood pressure when a person quickly stands up). With smoked cannabis there are dangers from respiratory irritation, and an increased risk of malignancies.

This review concluded that until further studies are conducted, cannabinoid-based treatment for CKD patients should be limited to the diminishment of chronic neuropathic pain.

Endocannabinoid system and the kidneys: from renal physiology to injury and disease (5)

This 2019 review was published in the peer-reviewed Cannabis and Cannabinoids Research Journal.

The researchers pointed out that the recently accumulated evidence shows the endocannabinoid system (ECS) having an important role in the proper functioning and homeostasis (dynamic state of equilibrium) of the renal system.

They also stated that negative changes in the ECS can result in various conditions (tubulo-glomerular damage, fibrosis, interstitial nephritis and glomerulopathy) which lead to AKI (acute kidney disease) and CKD (chronic kidney disease).

The research team concluded that these findings imply that ECS manipulation could be an effective treatment method for renal diseases and injuries, but additional studies are required to outline the precise role of the ECS in numerous kidney-related conditions and disorders.

Though inconclusive, the research so far indicates that there is a definite connection between kidney function and the endocannabinoid system.

Further scientific investigations of this relationship will certainly bring about a more comprehensive understanding of how different cannabinoid-based treatments can be applied for patients with renal disorders.

Although uncorroborated by the scientific community, there is some anecdotal evidence that points to the potential beneficiality of high-potency cannabinoid extracts such as RSO for a multitude of conditions and diseases – kidney disorders being some of them.