Skip to content
Home / Basics / Melatonin and Weed: What Happens When You Mix Them 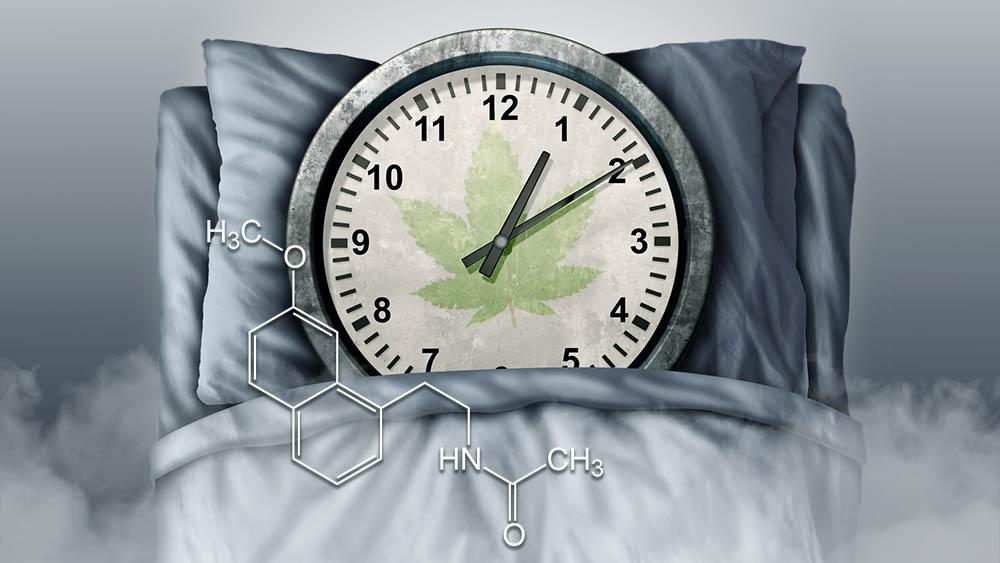 The exact relationship between cannabis and melatonin is yet to be fully understood by science, which prevents us from forming any definitive conclusions.

There are several aspects to cover, and the most important ones are:

Before we get into their convoluted relation, we should first spend some time getting acquainted with melatonin.

Most people know that it’s an over-the-counter supplement that helps us fall asleep, but melatonin is actually a truly fascinating molecule.

An introduction to melatonin

Melatonin is a naturally occurring body-produced hormone, and its main function is to regulate the circadian rhythm (also known as the sleep-wake cycle).

The circadian rhythm is a natural biological internal process that repeats itself approximately every 24 hours.

This rhythm is observed in plants, fungi, animals and humans, and is driven by the circadian clock.

The circadian clock (also known as the circadian oscillator) is an evolutionary internally-synchronized mechanism which allows an organism to predict environmental changes, and accordingly fine-tune its biological responses.

This graphic helps clarify the numerous internal mechanisms of the circadian clock.

The main role of melatonin is to prepare the body for sleep, and this effect is achieved through several interlocking mechanisms.

Firstly, the retina (which is the light-sensitive layer of the eye) sends electrical impulses to the SCN (suprachiasmatic nucleus), a miniscule region within the brain.

The SCN receives the “brightness” data from the retina, and depending how “bright or dark” the data, sends new electrical impulses to the pineal gland, which is responsible for the secretion of melatonin.

The cooperation of these three systems (retina, SCN and the pineal gland) is how the human body produces melatonin, and it is completely intertwined with the circadian rhythm.

Melatonin production begins when night starts (courtesy of darkness), and stops when the day begins (courtesy of light), preparing the body to be awake.

Now we should check out the available research on melatonin and cannabis.

While the effects of cannabis on sleep are well known (and undeniably complicated as they depend on numerous factors including type of weed, quantity, frequency of use, time of consumption and so forth), the relationship between cannabis and melatonin is severely unresearched.

Rare mentions of melatonin in regards to cannabis come from a 2017 study (1) from the Oregon Institute of Occupational Health Sciences.

In it, the research team states:

“Cannabis alters the sleep–wake cycle, increases the production of melatonin, and can inhibit the arousal system by activating cannabinoid type 1 (CB1) receptors in the basal forebrain and other wake-promoting centers.”

The aforementioned study was also quoting an older research from 1986 (2), which was observing melatonin levels in nine male volunteers (ages 29 to 33), after consuming a joint containing THC, and a regular cigarette without any THC.

This research found that after using cannabis, eight out of nine participants had a significant increase of melatonin in the blood.

Two additional aspects that the scientists also cited are frequency of use, and quantity of consumed cannabis.

According to their analysis, THC lessens the time required to fall asleep in occasional users, but also in frequent users (only in low doses).

What happens when you mix melatonin and weed?

Before we get into this paragraph, it’s important to note that no research was performed on the combined effects of cannabis and melatonin, and therefore we don’t condone or advise the use of these substances in unison.

The advised dose for melatonin is between 1 and 3 milligrams, and it’s also recommended not to consume melatonin supplements for a period longer than two months.

It’s also relevant to mention that since both melatonin and cannabis are safe substances, combining them infrequently and responsibly should not bring about any serious adverse effects.

The main sensations from anecdotal reports are closed-eye hallucinations (also known as closed-eye visualizations), and the ability to experience intense dreams while being high.

These reported closed-eye hallucinations resemble dream-like states where the users vividly visualize the thoughts that are going through their head, while they’re still awake.

The second effect is also undoubtedly fascinating, mostly because the majority of cannabis users don’t dream after using weed.

This happens because cannabis prolongs the deep-sleep phase of sleep, which reduces the time spent in the REM (rapid-eye-movement) phase, which is the stage where intense dreaming occurs.

It seems that the presence of melatonin changes something within the brain, which allows users to both experience and remember their dreams while under the influence of weed.

This effect could be considered useful, as it’s pretty frustrating to miss out on dreaming all the time, which affects heavy cannabis users the most.

Contrarily, the lack of dreaming can be extremely beneficial for other people, for instance PTSD patients, who suffer from recurring haunting nightmares.

Natural melatonin production is crucial, and much more important than using supplementation.

Ways to achieve this is to keep lighting low before you go to sleep (no phone/computer/TV), sleeping in pitch-black darkness, and making sure not to turn on the lights if you’re taking a trip to the bathroom in the middle of the night.

Morning or afternoon daylight/sunlight exposure are also beneficial for your body’s ability to produce melatonin in an adequate time-frame.

Besides regulating the circadian rhythm (sleep-wake cycle), melatonin is also a potent antioxidant and free-radical scavenger (3).

This implies that sufficient melatonin levels diminishes the risk of cancer (4), and de-accelerates the aging process (among numerous other benefits).

Lab-made synthetic melatonin supplements are usually made in pill form, and liquid sublingual products act the fastest, as they are absorbed directly into the bloodstream (unlike melatonin pills which have to pass through the digestive tract).

Melatonin supplements should not be used if you’re pregnant or you’re breastfeeding, if you suffer from an autoimmune disorder, depression or a seizure disorder.

People suffering from high-blood pressure and diabetes should check with their healthcare practitioner before using melatonin supplements.

To conclude, if you’re determined to experiment with weed and melatonin make sure to start low and go slow, and avoid continuous use at all costs, because we just don’t know if this combination is damaging to one’s health in the long run.

32 thoughts on “Melatonin and Weed: What Happens When You Mix Them”