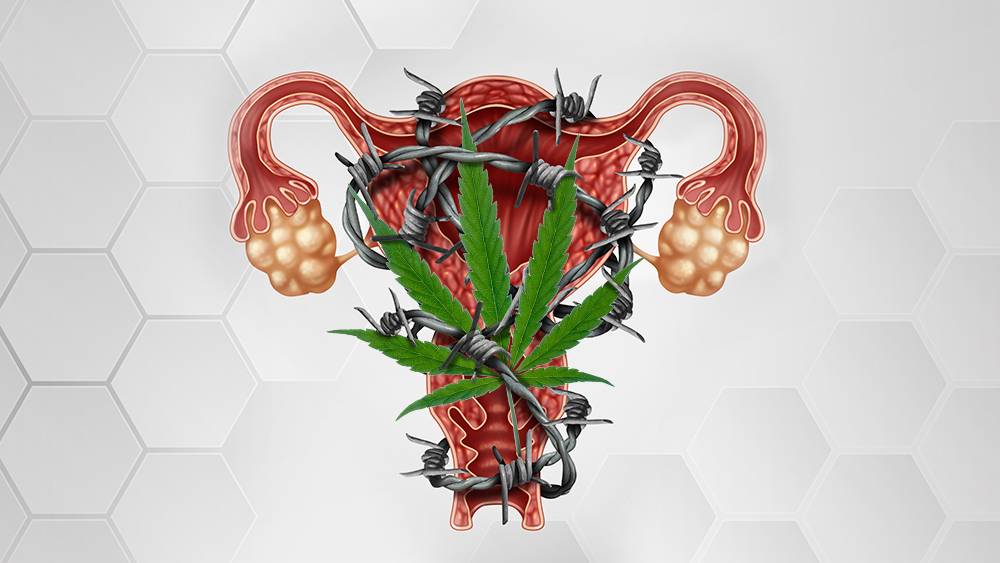 Polycystic Ovary Syndrome (PCOS) is a hormonal disorder that affects 1 in every 10 women of childbearing age, from 15 to 44.

Being such a common condition, one would assume that there is a cure for PCOS. Unfortunately, up to this day, there hasn’t been any proven medical breakthrough that can completely heal this hormonal imbalance, only treatments that can decrease or (if you’re lucky) eliminate the symptoms of PCOS.

In recent years, however, there has been a lot of hype built up around cannabis being used as a treatment for PCOS.

In numerous studies, cannabis has been seen to effectively treat pain and stomach cramps, relieve anxiety and perform wonders with bad skin and hair, all of which are common symptoms of PCOS. But, can cannabis cure PCOS?

Let’s hear what science has to say about it.

Polycystic Ovary Syndrome (PCOS) is a medical condition that is caused by an imbalance in female hormone levels.

Women who suffer from the condition produce high levels of the male hormone Androgen (steroid hormones that affect the development of the male reproductive system) in their ovaries.

The most common symptoms of  Polycystic Ovary Syndrome (PCOS) are:

The exact cause of PCOS is still not entirely clear. Some evidence suggests it is a genetic disease, so if your mother, sister or close female relatives have PCOS, you’re at a higher risk. Additionally, those who are obese stand a good chance of developing PCOS.

Women suffering from PCOS are at increased risk of developing more serious health conditions such as:

How is Polycystic Ovary Syndrome treated?

Although there is no cure for PCOS, it is a treatable condition. The course of treatment largely depends on the extent of the symptoms the woman may have.

If the symptoms aren’t severe, for example, changing unhealthy habits and losing weight can regulate and correct the hormonal imbalance of the body.

For more severe conditions of PCOS, a combination of a healthy diet and medication is necessary for treating symptoms.

Women who don’t wish to become pregnant can turn to birth control pills to restore their hormonal balance and help with regulating their menstrual cycle.

If a woman has developed insulin resistance, she’ll need to look to using different diabetes medication.

In addition, for women who suffer from problems associated with anxiety and depression, different antidepressants can be prescribed.

On top of that, pain killers are a commonly used medication that can be used to help alleviate painful menstrual cramps and pelvic pain.

What role does cannabis play in PCOS treatment?

In recent years, cannabis has attracted huge attention to its medical properties. But when it comes to PCOS, can cannabis treat or even cure this tough condition? This is what we know so far.

First of all, cannabis is a widely used form of medication for pain treatment, a symptom that is often associated with PCOS.

Most women who suffer from PCOS have very painful menstrual cramps, intense back pain during their menstrual cycle and sometimes abdominal pain due to the development of cysts in their ovaries.

In the case of depression, which is also a common symptom for women suffering from PCOS, marijuana can have both beneficial and harmful effects.

Although there is no consensus on this topic, the popular opinion seems to be that marijuana with a high dose of THC is going to improve symptoms of depression, while lower doses of THC and higher doses of CBD seem to have the effect of an antidepressant.

So, cannabis can be used as a palliative treatment for the numerous side effects of PCOS. But what we want to know is if cannabis can become a potential medical cure for this unpleasant condition?

The endocannabinoid system and ovarian function

In order to fully understand how cannabis can influence a hormonal disorder such as PCOS, we need to understand the biological processes that happen in the female body and the importance of the endocannabinoid system for reproductive health.

The endocannabinoid system is a signaling network of the body that consists of:

CB1 receptors are mainly located within the central nervous system and CB2 receptors are predominantly found within cells of the immune system.

However, both of these receptors are also present in female sex organs and play a vital role in the regulation of reproductive health.

Ovaries are the female reproductive organs that produce reproductive cells (gametes) for fertilization and reproductive hormones, namely estrogen, testosterone, inhibin, and progesterone. These play a crucial function in the menstrual cycle and fertility.

During the menstrual cycle, the ovaries undergo three series of changes: the follicular phase, ovulation, phase, and luteal phase.

During the follicular phase, a woman’s brain (the hypothalamus) releases the Gonadotropin-releasing hormone (GnRH) that stimulates the secretion of two hormones in the anterior pituitary gland: follicle-stimulating hormone (FSH) and luteinizing hormone (LH).

Those hormones travel through the blood to a woman’s ovaries where they produce 15-20 eggs in the ovarian follicles.

Estrogen is then synthesized in significant amounts from the preovulatory follicle to decrease the levels of LH and FSH.

Lower levels of these hormones will lead to the death of most of the produced follicles, and only one, dominant follicle will completely mature to release the egg. This phase is called ovulation.

Then comes the luteal phase when ovaries make a hormone called progesterone, which helps thicken the lining of the uterus in preparation for a possible pregnancy.

The reason why I’m explaining all the phases of the ovarian cycle is not that I want you to recall study material from 10th-grade biology classes, but to explain the effects that cannabinoids seem to have in this natural process.

The effect of cannabinoids on female hormones

Science has discovered so far that CB1 receptors are localized in the hypothalamus, the brain areas where the GnRH is produced.

What this means is that a high level of endocannabinoids (produced in our body) and exogenous cannabinoids (from cannabis intake) restrain the release of gonadotropin-releasing hormone (GnRH), which further suppresses the production of follicle-stimulating hormone (FSH) and luteinizing hormone (LH) in the anterior pituitary gland.

Consequently, this harms the female gonadal function and decreases estrogen and progesterone production.

To put it simply, chronic cannabis consumption can lead to the following:

Another study, published in 2009, was the first to discover the presence of an entire endocannabinoid system in the human ovary. It was also discovered that CB2 is concentrated at a much higher level in the ovarian follicle than CB1.

This finding could suggest that the endocannabinoid system has a very important immunological role in ovarian function, but this hypothesis has not been proven so far.

When it comes to a direct connection between ECS and PCOS, one recent study has found that some of the most dangerous characteristics of PCOS (insulin resistance and obesity) may be associated with ECS activation.

This means that an increased level of endocannabinoids in your body and high stimulation of the CB1 receptors (both of which occur by consuming cannabis) can be a risk factor for insulin resistance in women that suffer from PCOS.

Based on this study, one wouldn’t suggest using cannabis as a treatment for PCOS, as it could potentially lead to the progression of PCOS.

On the other hand, a different study found evidence of increased C-reactive protein (CRP) levels, inflammatory cytokines and leucocyte count in women with PCOS.

In other words, PCOS could be an inflammatory process. And, we all know that cannabis is proven to be a great anti-inflammatory.

In fact, several compounds found in cannabis (THC, CBD, terpenes) are shown to have great capabilities in the treatment of many inflammatory disorders.

However, there haven’t been any studies to find a direct connection between cannabis smoking and PCOS.

Although the majority of studies on the effect of cannabinoids on ovarian function have been conducted in vitro, on animals, or on a small sample, it’s been implied that PCOS could be tied to a dysfunction in the endocannabinoid system.

Cannabis-derived cannabinoids may distort the delicate connection between the ECS and the homeostatic mechanism in the female’s reproductive process.

As such, it isn’t recommended to use marijuana as a potential cure for PCOS or any other female reproduction-related disorders.

Having said that, there haven’t been enough human studies to prove a negative linkage between cannabis consumption and female reproductive health either.

All we know so far is that ECS plays a vital role in keeping our reproductive health in balance, and exogenous cannabinoids in cannabis are certainly playing a significant role in keeping or disturbing that equilibrium.