Skip to content
Home / News / Is there a place for cryptocurrencies in the legal cannabis market? 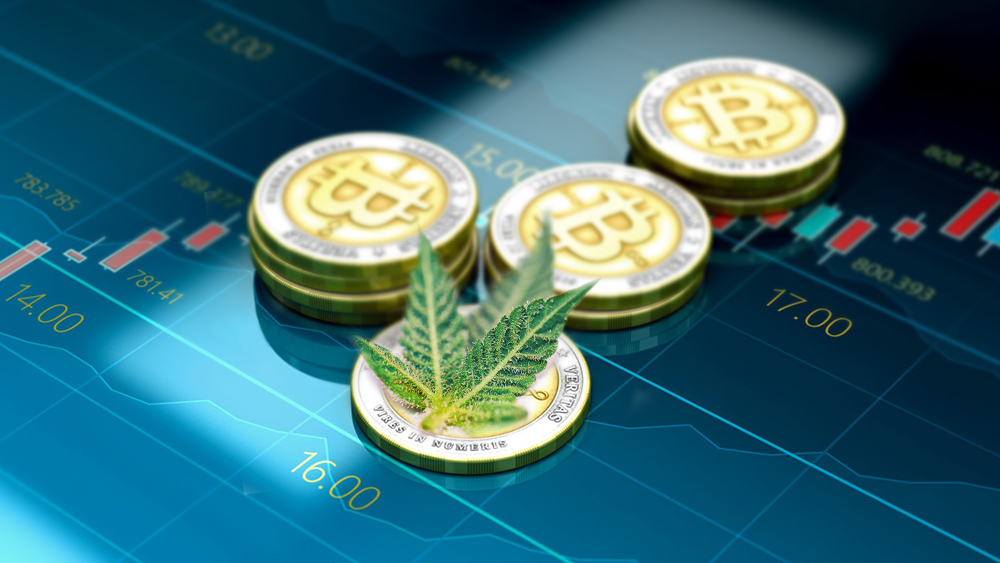 With Canada’s recreational cannabis set for July 2018 and a budding US market (now that LA’s has announced their recreational model), many entrepreneurs are questioning whether they’ll be able to find their place in this fresh, money making industry.

Like any new market, there are 1001 opportunities in cannabis as well: stock trading, eCommerce, joining an LP, becoming an LP, developing cultivating technology, augmented reality apps and a heap of other supporting services that make up a large part of any multi-billion dollar sector.

All of this is perfectly fine and logical if it weren’t for one big back-end obstacle:

The financial industry does not support cannabis as much as they do other mainstream businesses.

Everyone that knows cannabis market in detail is familiar with the fact that just finding a bank that’ll host your cannabis-related account is difficult. And this is just the first step.

If you want to have an online presence (or an online store) you’ll have to navigate your way through some rough waters in order to find an online or POS payment processor that’ll take your business and only then will you be faced with integrating alternative payment methods.

For dispensary owners, cash is often the only payment option so they go through even more trouble trying to find a bank that’ll take their money.

Thinking about it, there are two reasons why financial institutions are so hesitant to jump head-first into the cannabis market.

One, they find it too volatile for their taste and two, cannabis is illegal on a federal level (medical in Canada is an exception). Add to that the fact that there is no global standardization and that most markets are locally regulated, banks and payment processors will find that suddenly there are too many options on the table for them to fully support cannabis market in general.

Legalization on a federal level might change that and open up more options, but don’t forget the fact that cannabis gets legalized so that the governments can increase their control over what used to be an illegal (or at best gray) market.

So if mainstream financial institutions won’t fully support the cannabis market, who will?

Cryptocurrencies are blowing up these days like never before.

On December 7, Bitcoin (the most popular cryptocurrency) reached a record breaking $16,000 after a massive spike in December, putting a total market cap at just over $259B. 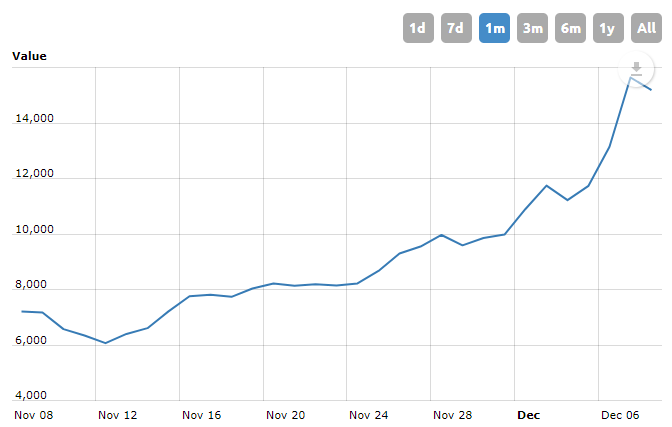 This was unexpected, to say the least, but it only goes to show just how much demand there is for alternative payment methods. You could always argue that bitcoin is a bubble that’s about to burst, but it certainly doesn’t seem so right now.

Just a few days ago, AngelList co-founder Naval Ravikant said, in his presentation at the Token Summit II, that crypto’s have just what it takes to solve money problems of all kinds of people around the world and that “money is a bubble that never bursts”. Bitcoin is money, as its value is what we decide it to be. Cash, or our everyday centralized payment system is exactly the same in a way, as its value is determined by us, not some other outside force.

So you could say that Bitcoin is growing and it just might stick around for a long, long time.

However, Bitcoin is not the only digital exchange medium that has the potential to enter cannabis market. Currently, there are more than 1,300 cryptocurrencies available on the Internet and a new one can be created any time.

They are all decentralized, which makes them tricky to keep track of, which is why there are blockchains — open ledgers that record transactions between two parties, usually managed by a peer to peer network.

There is a system here, and a dependable one for that matter, so what stops stakeholders in the cannabis industry from trusting cryptocurrencies completely?

Cannabis users are no strangers to cryptocurrencies

If you think that Bitcoin, Litecoin and Ethereum are strictly reserved for DarkNet and ordering online weapons then you’re living in 2009.

Jennifer Kaplan from Bloomberg recently reported how innovative digital currency companies are making a forward step in connecting crypto’s and pot, the biggest example being Trove Cannabis — a Washington pot store that uses POSaBIT as a way to go around the cash-only payment method.

POSaBIT develops a system that enables cannabis users to buy weed using a credit card in a place where paying with credit cards is not possible.

A customer comes to the dispensary and decides that he wants to buy pot using his credit card. He then checks into the POSaBIT terminal which enables him to buy Bitcoin equal to the value of purchase. He redeems the currency in the store, takes his pot and POSaBIT immediately transfers the money to dispensary’s bank account, while taking a small fee for their intermediary service.

POSaBIT is not the only company dealing with alternative payment methods point of sale transactions and payment processing.

SinglePoint tried to do a similar thing with their SingleSeed subsidiary, which enables text message payments and a few other payment solutions for the cannabis industry. They also have technology similar to POSaBIT, which enables cannabis merchants to process credit card transactions independent of banks.

Alternative payment methods are welcome in the cannabis market and Bitcoin is currently being utilized as way around the cash only point of sale payment method in several dispensaries.

Even though Bitcoin is good for most transactions, there are several pot-only cryptocurrencies that are designed specifically for the cannabis sector.

PotCoin, for example, is one of the main competitors in this sector after financing a Dennis Rodman PR stunt in June this year. Former NBA superstar was spotted wearing a PotCoin T-shirt during his trip to North Korea, which skyrocketed the value of PotCoin from $0.004625 to $0.179644, which is more than 3700%.

What’s important to note is that PotCoin is the first cryptocurrency to be associated with a licensed producer. On December 1, 2017, PotCoin partnered up with a Canadian LP WeedMD, which will now allow PotCoin as one of the payment methods. In my opinion, the only advantage PotCoin could have over Bitcoin is the transaction speed — PotCoin reportedly takes 40 seconds to complete a transaction and Bitcoin is known to take around 10 minutes.

DopeCoin is another cannabis-related digital currency that’s on the rise. Unlike PotCoin, DopeCoin does not specifically target legal cannabis industries but is rather unbiased when it comes to the exact application. It celebrates monetary freedom, so to speak, so I’m not sure whether we’ll ever see it as a trusted payment method in the cannabis world, even though it essentially does the same thing as your regular dollar bill, which you can use in both legal and illegal ways.

Is blockchain the answer?

Combining legal cannabis and crypto’s is a bit of brain freeze. Currently, the only logical way to use cryptocurrencies is to avoid restrictions with bank accounts, POS systems and credit card payments that exist within the cannabis market.

There are several already developed systems that LP’s and dispensary owners can use (SinglePoint, for example), buyers are no strangers to alternative payment methods and, for most business owners, this seems to be a good way around financial institutions that are hesitant to take a dive.

When you put everything on paper, cryptocurrencies have what it takes to satisfy most cannabis businesses in their early to medium growth stages. In the end, I believe that cryptocurrencies will provide a good solution for the cannabis industry, but only until mainstream financial institutions decide that they want in on legal cannabis.