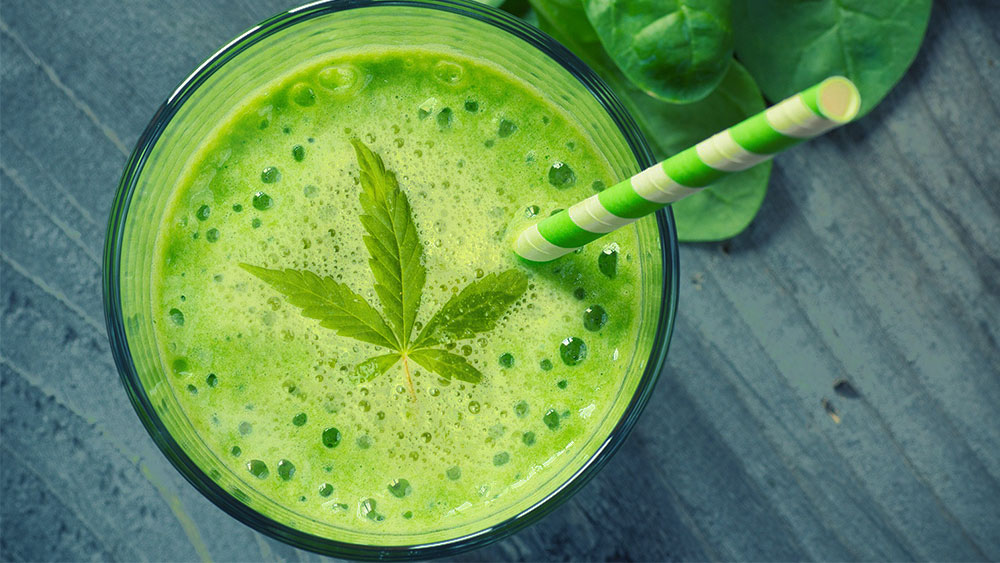 In recent years, a lot of people have been advocating the use of raw cannabis for medicinal purposes on the premise that the active chemical compounds in the raw plant have unique health benefits.

Smoking, vaping, edibles (like marijuana candy), topicals and high-concentrated oils like RSO all incorporate the process of decarboxylation, which is achieved by applying heat to plant material.

By raising the temperature, the compounds from cannabis lose an atom of carbon, and because of this, they are able to “fit” into CB1 and CB2 cellular receptors of the endocannabinoid system in our brain and body.

This is why no perceptible mental change occurs when we eat a fresh, raw bud, as our stomach doesn’t produce enough heat for the carbon atom to separate from cannabinoid molecules.

Because of this, THC cannot bind the receptors in our brain (CB1) in charge of producing the psychoactive “high” unique to cannabis.

Even though research is very scarce when it comes to raw cannabis, it seems that cannabinoids in their acidic form (with that additional atom of carbon) use a different pathway to affect the human body.

Who started the raw cannabis movement?

The biggest proponent of raw cannabis is Dr. William Courtney from California, who first noticed the effects of this type of ingestion on his wife Kristen, who was struggling with systemic lupus, rheumatoid arthritis and several other conditions, all at once.

After several weeks of juicing leaves and buds, her state improved dramatically and Dr. Courtney realized that the change was directly caused by raw cannabis.

In Dr. Courtney’s opinion, the biggest advantage of consuming cannabis in this manner is that a patient can dramatically increase the daily intake of cannabinoids, because psychoactivity is completely avoided when we juice/eat fresh cannabis.

The “high” poses an issue, especially for children and the elderly, who either don’t want to, or should not be exposed to mind altering substances at such a delicate age.

A lot of people tend to become flustered when too much THC is consumed, experiencing heart palpitations, anxiety and paranoia.

The intensity and duration of these side effects is highly individual, but for medical users who experience them frequently, raw cannabis seems like a perfect way to avoid these negative sensations.

How does raw cannabis work?

According to Dr. Courtney, raw cannabinoid acids usually don’t provide instantaneous symptom relief, although some effects can occur without delay.

What it happens is that cannabinoid acids get stored in fat tissue. It takes 4 to 8 weeks to fully saturate the fat tissues of a human body.

Dr. Courtney cites the research of Ruth Ross (PhD), who found that cannabinoid acids CBDA and CBGA have an antagonistic (blocking) effect on the GPR55 cellular receptors, which is a receptor heavily involved in cancer cell creation and proliferation (the rapid duplication of cancerous cells).

GPR55 is also associated with pain perception and inflammation.

Another part of Dr. Courtney’s puzzle is Mary Abood (PhD), who reported that approximately 70 trillion cells in our body express GPR55 receptors.

Unfortunately for us, scientific consensus doesn’t really exist when it comes to this receptor type, and different studies have different findings.

For instance, this same study co-authored by Ruth Ross also concluded that GPR55 receptor is blocked by both CBDA (cannabidiolic acid) and CBD (cannabidiol), and that THCA acts as a weak activator of this receptor type.

The science behind cannabinoids in their acidic form is still at its starting phase, but just like there’s absolutely no research conducted with high-concentrated forms of cannabis (like BHO, Rosin, RSO etc), this doesn’t necessarily mean that raw cannabis doesn’t work, it just means that official research is falling behind.

Luckily we can also look at the other side of the coin, and by this I mean user experience.

A lot of people have been juicing raw cannabis for medicinal purposes, so we should definitely check some of their stories.

One thing is certain, something definitely happens when we consume non-decarboxylated raw cannabis.

Dr. Courtney’s wife went from taking 40 medications a day to being completely vital, because of juicing raw cannabis on a daily and regular basis.

She was diagnosed with lupus and rheumatoid arthritis when she was 16. She also had interstitial cystitis (a painful bladder condition), cervical cancer, and the doctors told her she was sterile and would never have children.

Like all of this wasn’t enough, she was also struggling with hypothyroidism, chronic infections, and had 16 surgical procedures.

Kristen is also resistant to most antibiotics, and cannot use a lot of conventional pharmaceuticals because of allergies.

She first started smoking cannabis to ease her pain, and soon realized that she had fewer infections after frequently using pot.

She began looking into if cannabis was doing something more than just masking the pain, and soon after moved to California in order to use cannabis legally.

Kristen was getting better, but still didn’t experience the type of healing that she was expecting.

After talking to a couple of cannabis clinicians and attending different lectures, she found out that cannabinoids exist in acid form in raw unheated cannabis.

Having powerful medicinal properties, raw cannabinoid acids boosted her immune system, which was now functioning at a much greater capacity.

After about 6 weeks of juicing raw cannabis, she was infection free, and all her conditions went into remission.

She was even able to conceive a perfectly healthy child, even though doctors told her that she was completely barren.

Amber was 2 years old when she was diagnosed with terminal brain tumors. After an excruciatingly long surgical procedure, the doctors gave her a 10% chance of survival.

After radiation and chemotherapy, Amber’s tumors were still growing and her parents decided to give her a shot-glass of cannabis fan-leaf juice every day.

One month later the CAT scan revealed that the tumors have shrunk and that there was fewer of them.

Because there is no psychoactivity with raw undercarboxylated cannabis, children and even toddlers can be safely treated with it.

In this video on HuffPost Live, Dr. Courtney talks about a patient of his who was 8 months old at the time and had a massive centrally-located inoperable brain tumor.

The boy’s father managed to avoid exposing his son to chemotherapy and radiation, and within eight months they managed to reduce the size of the tumor practically to zero.

Because of that the child won’t have to experience the long term effects from chemotherapy and radiation.

They were using a cannabinoid oil on the baby’s pacifier twice a day, and the tincture was made from a plant that had 3.8% CBD.

After the first two months there was a drastic reduction in the size of the tumor. After four months the tumor was practically gone, and after 8 months his brain was completely disease-free.

How to use raw cannabis?

Cannabis should be placed to soak in water for about 5 minutes prior to juicing.

It should be stored unrinsed either in a fridge or a freezer, in bags/containers that are normally used to preserve the freshness of vegetables.

Because cannabinoid acids are fat-soluble, raw cannabis juice should be mixed with frozen yoghurt or ice cream, which also makes it a lot more enjoyable, because the juice is really bitter when consumed separately. Fruit and vegetable juices can also be used to mask the flavor.

The mixture should be split into several smaller portions, and consumed throughout the day. 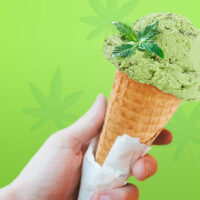 Is raw cannabis a real thing or not?

Even though our current understanding of the mechanisms of action of cannabinoid acids is quite limited, the available anecdotal evidence is promising.

The downside of this is that acquiring fresh cannabis is an almost impossible task for the biggest percentage of people living on this planet, but it’s definitely doable for people in Canada and the US.

If you have an option to grow (or purchase) fresh fan leaves and raw uncured buds, and you’re unsatisfied with the results you’re getting with “heated” (decarboxylated) cannabis, I would suggest you give raw cannabis a chance.

Also, if you find the psychoactivity hindering, raw cannabis seems like a perfect way to dodge the intense cerebral sensations associated with THC, and still get the medicinal benefits of cannabis.

I’ve been eating raw cannabis for about a year .It started with eating the crumbs after rolling a joint ,to now eating a couple buds a day .Ive wondered if there was any benefits to consuming it raw .I have lost weight but have no improvement to my arthritis in my neck .

interesting. I would think some of the inflammation has gone down. They need to really analyze cannabis and make it so we can all enjoy eating it raw etc for the benefits it can provide us!

Thanks Marco, great article of yours

That is a thorough article on raw cannabis. Best one I've read yet. Thankyou!

Thank you Paul, we aim to please :)