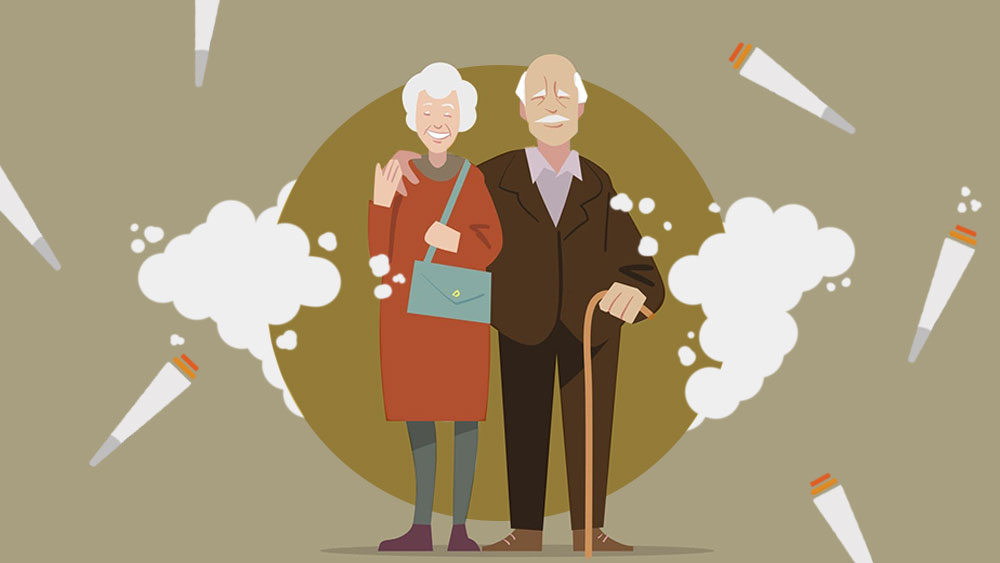 With legalization in full swing in Canada, research is growing over the potential medical uses of cannabis.

One demographic of specific interest is seniors, or those aged 65 or above.

As baby boomers are now entering their golden years, those who may have used cannabis in the swinging 60s are turning to the drug once again, and statistics show increasingly.

However, there is still a lot of mystery over how cannabis can be helpful or harmful to seniors.

Read on to find out the advantages and risks of seniors using cannabis, what senior-specific ailments cannabis could potentially treat, and the cannabis businesses that are beginning to target seniors.

Recent statistics have shown that cannabis use among seniors is on the rise.

A study by the journal Drug and Alcohol Dependence found that nine per cent of adults in the U.S. aged 50 to 64 and three per cent of those aged 65 and older reported using cannabis in 2015 and 2016.

The increase of use is even greater for those aged 65 and older, where those who reported using cannabis a decade ago increased seven times, from 0.4 per cent.

In Ontario, a recent study by the Centre for Addiction and Mental Health (CAMH) found that those aged 50 and older who reported using cannabis in the previous year shot up from 1.4 per cent in 1998 to 11.4 per cent in 2017. That’s eight times the use from a decade earlier!

For states that have legalized cannabis in the U.S., such as Oregon, Colorado, Washington State, Nevada and California, seniors make up 25 per cent of all cannabis consumers, according to cannabis research firm The Brightfield Group.

Risks of cannabis for seniors

While there may be a growing interest among seniors towards cannabis, the science is still coming in on how cannabis can be useful to seniors and what the risks are.

For this reason, many health practitioners have taken a conservative approach towards cannabis and seniors, rather than the “cure-all” mentality that is prevalent in the cannabis industry.

The College of Family Physicians of Canada has only recommended cannabis for four conditions: Neuropathic pain, palliative or end-of-life pain, chemotherapy-induced nausea and vomiting, and spasticity due to multiple sclerosis or spinal cord injury.

Health Canada is currently funding a comprehensive set of guidelines for consumers and physicians in cooperation with the Canadian Coalition for Seniors’ Mental Health, which is set to be released in February 2019, according to Rand Teed, a member of the coalition.

Teed said that the two major risks of cannabis use with seniors are interference with other medications and falls due to impairment.

Due to the wide variety of medications seniors often take, much still unknown about how cannabis interacts with other medication, Teed said, and warned that cannabis does limit the effectiveness of selective serotonin reuptake inhibitors (SSRI), the most common type of antidepressants.

Cannabis may also interfere with the effectiveness of other opiate-based pain medications, which act on the endocannabinoid system just as cannabis does, according to Teed.

Health Canada has warned that certain antidepressants, such as fluozetine and Prozac, as well as heartburn drugs, antibiotics and drugs to treat high blood pressure can compete with the same liver enzymes that break down THC, the chemical in cannabis that causes psychoactive effects, potentially leading to higher levels of THC in your bloodstream.

An added risk to cannabis for seniors is that it now more potent than it was in the 1960s and 70s, when seniors were in their teens and 20s and might have taken the drug, Teed said.

That increase in strength can lead to heightened anxiety and heart rate when cannabis is consumed, as well as hallucinations and delusions in extreme cases.

Possible uses of cannabis for seniors

With the risks being said, there are still some uses of cannabis for seniors that could be helpful in their lives.

Teed recommends seniors go with a strain that is high in CBD, the non-psychoactive cannabinoid in cannabis, and low in THC — no higher than 10 per cent, he says.

“There are several possible benefits from CBD, [such as] pain relief,” Teed said. “There are some indicators that CBD is helpful for mood.”

There are also no known issues with memory impairment or reduced cognition with CBD as well, giving it a leg up over THC, which has been found to affect memory and cognition.

That being said, some studies have found cannabis to be helpful for certain conditions.

The American Cancer Society says that a number of small studies have found cannabis to be helpful in treating nausea and vomiting cancer patients experience from chemotherapy, as well as neuropathic pain, which is caused by damaged nerves.

Two THC-infused oral pills, Marinol and Cesamet, have been approved by the Food and Drug Administration (FDA) in the U.S, and are used to treat nausea in cancer patients.

Cannabis also provides unique advantages when used for pain control, especially when compared to opioids, which are commonly prescribed to seniors for pain.

A report by the National Academies of Sciences, Engineering and Medicine (NASEM) in January 2017 found that cannabis can be effective in treating chronic pain by attaching to cannabinoid receptors in our bodies that doctors think play a role in pain control.

While dependency on cannabis can grow, it is far less addictive than opioids and does not present the risk of overdosing. The U.S. is currently undergoing an opioid epidemic – there were almost 50,000 overdose deaths in the country in 2017.

Cannabis is also cheaper than opioids. Seniors spend on average close to $3,000 a year on prescription drugs in the U.S., compared to $650 a year on cannabis for the average person.

Researchers also calculated that Medicare in the U.S. saved more than $165 million on prescription drugs in 2013 in 18 states that made medical cannabis legal.

People may already be catching on to the benefits of cannabis compared to opioids.

A report by the journal Health Affairs found that in U.S. states where medical cannabis is legal, prescriptions for painkillers and other drugs dropped significantly.

A survey by the European Journal of International Medicine from March 2018 also found that out of 2,736 patients aged 65 or older, 18.1 per cent stopped using opioids or reduced their intake after six months of cannabis use, while 93.7 per cent of respondents found cannabis improved their condition.

When talking about pain, a common ailment seniors suffer from is arthritis, and many have found cannabis useful in treating it.

In 2013, Health Canada found that two-thirds of Canadians who registered to purchase medical cannabis were taking it to treat severe arthritis, and a report by cannabis journaling app Strainprint found that back pain and arthritis were the top conditions people over 50 used cannabis to treat.

The Arthritis Society has already dedicated $720,000 to medical cannabis research for 2015 to 2019, and has asked the federal government for a similar commitment.

While research is still being done on more serious ailments seniors suffer, some evidence has come in that it could be helpful in tackling Alzheimer’s Disease, which afflicts about 10 per cent of seniors in America.

In 2014, a study in the Journal of Alzheimer’s Disease found THC can help slow the advancement of beta-amyloids, clumps of protein that build up in the brain and are one of the leading signs of the presence of Alzheimer’s. The study “strongly suggests that THC could be a potentially therapeutic treatment option for Alzheimer’s disease.”

Cannabis has also been found to be a muscle relaxant, and has been used to lessen tremors in Parkinson’s disease as well.

How seniors can take cannabis

Given the potential positive effects cannabis may have for seniors, the next question is the best way for seniors to consume it.

Smoking cannabis is probably the worst way to go as it is harmful to your lungs and can up the risk of cancer due to carcinogens that are released. Measuring your intake is also harder to do when smoking a joint.

Vaping as well provides problems in dosing, and because it can take some time for the high to kick in, it may be easy to take too much. However, it is better for your lungs than smoking.

Oils provide a solution for being able to precisely measure the amount of cannabis you are consuming. They can be squirted into your mouth or mixed with liquids, such as tea, smoothies or juice, and can easily be measured to make sure you’re not taking too much.

Edibles, which are not yet legal in Canada, are a riskier way to consume cannabis. While you are avoiding smoking, it is hard to measure your intake and easy to overdo it. Edibles or oral products also take longer to leave the body, about 12 hours to a day for a 70-year-old, which could be too much of a good thing.

Another option for consuming is topical treatments, such as lotions and creams, which can treat muscle soreness or arthritis.

They don’t give the typical cannabis high, but allow you to target one specific area of pain rather than a full body effect.

Whatever your method, it is wise to microdose your cannabis at first, meaning start with a very small dose then work your way up, to ensure you can handle the high and don’t take too much.

It is also a good idea for seniors to monitor the changes in their mood, blood pressure, blood sugar and cholesterol when taking cannabis, to see if it is causing any negative effects.

As research is just ramping up on how seniors can use cannabis, companies are beginning to recognize the potential of the market.

Licensed producer Canopy Growth announced a six-month study in early October that will track and monitor the effects of medical cannabis as an alternative to other pain medications.

The study will involve around 500 seniors in facilities across Ontario, made possible through a partnership with the Ontario Long Term Care Association (OLTCA). It is one of the world’s first and largest medical cannabis pilot programs in the long-term care space.

Nanaimo-based licensed producer Tilray is another company that is studying the effects of cannabis on seniors with a six-month study that will look into cannabis’ effect on sleep, the perception of pain and overall quality of life in patients over 50 years old.

The study will begin in Sarnia, Ont., and then eventually expand to more clinics in British Columbia and New Brunswick in 2019. 600 to 1,000 patients are expected to sign up.

In terms of senior-specific cannabis goods, HEXO is a company that is eying the so-called “grey market.” It expects a spike in sales among seniors for edibles once they are legal in October 2019. The Gatineau-based company is already building strategic partnerships with consumer packaged goods companies ahead of the legalization date.

While the science is still coming in on seniors and cannabis, there are positive signs that it could provide a less addictive and expensive option to some other medications. For now though, the best option for those turning to the green in their golden years is to take it slow, do your research first and aim for low THC/high CBD cannabis strains to be extra safe.

Do you recommend a vaporizer for someone that has COPD, instead of smoking it? What other ways besides edibles can I use? Thanks for any help you can give me. Margaret