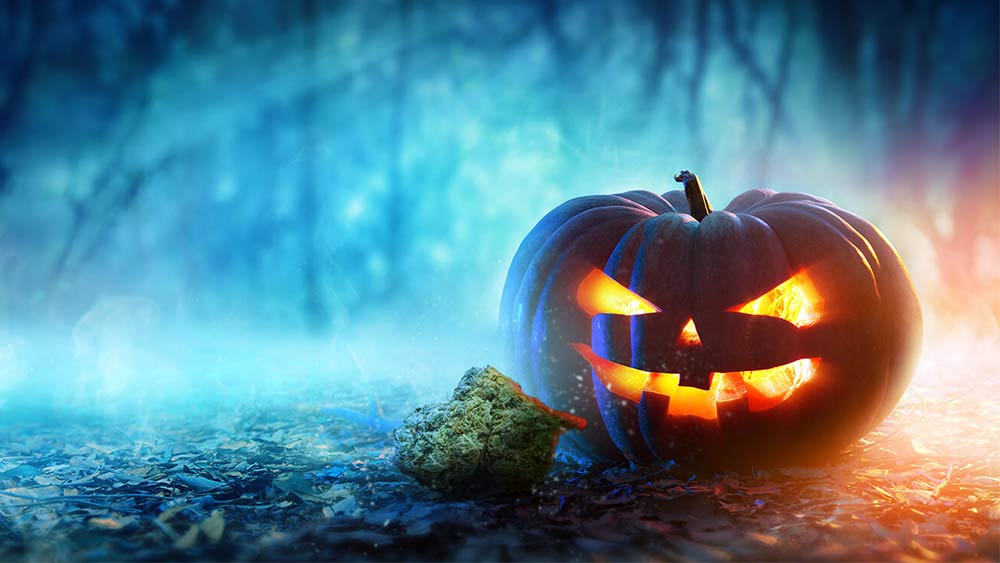 When it comes to naming cannabis strains, everything is allowed as long as the name is catchy, informative, and not offensive.

The name of a cannabis strain is usually trying to explain any of the following:

Whether they are aiming at some specific strain trait or they are simply conveying a mishmash of their unrelated thoughts, the breeders use their creativity or sense of humor to come up with a unique name for their “cannabis child”.

And to be frank, a good smoking session can spark a lot of “interesting” ideas. This is evident when you check some of the strain names online.

To help you get into the perfect Halloween mood, I decided to make a list of some of the spookiest weed strain names.

So, apart from spooky weed, you’ll find a few other interesting things on this list that will hopefully help you experience Halloween the right way.

Freddie Mercury doesn’t look at all scary singing and dancing in fur and pantyhose to Queen’s hit song (it is actually really pleasing to the eye), so the Killer Queen strain is more likely a reference to Elizabeth Báthory.

Elizabeth was a 16th century Hungarian noblewoman and “the most prolific female murderer,” as cited by the Guinness World Records.

It has been reported that she killed up to 650 young women and bathed in their blood to preserve her beauty and youth. Because of this vampiric activities, she is often portrayed as a female version of Vlad III Dracula, the most famous vampire on the planet.

But don’t worry, when you smoke Killer Queen, you won’t feel the sudden urge to drink human blood. Quite the contrary, this thrilling hybrid of G13 and Cinderella 99 will give you uplifting and cerebral ride that will help you through the working day.

Be careful, though, as it is really strong and it immediately hits you in the forehead. Maybe its effect could best be described by Freddie’s lyrics from the aforementioned song: “She’s guaranteed to blow your mind!”

Black Dahlia is a beautiful dark red flower (technically not black) that symbolizes betrayal and dishonesty.

It is also a nickname posthumously given to Elizabeth Short, one of America’s most famous unsolved murders by this date. The 22-year old woman’s body was found brutally severed in half and completely drained of blood.

Due to the brutal nature and mystery that still surrounds this murder case, The Black Dahlia has been the subject of numerous books and movies.

The strain, however, is not popular among a wider cannabis audience, but has a small base of fans and devotees who enjoy its Indica dominant effect.

This hybrid is a combination of Black Cherry Soda and Querkle, and has a distinctive “black as night” color.

Black Dahlia delivers a strong sedative effect which is proven to be an excellent treatment for pain and insomnia.

Another scary female reference, only this time we talk about spiders.

Black Widow female spiders are notorious for their shiny black appearance and tendency to eat their mates after sexual intercourse.

But these horrifying female spiders are not just dangerous to their mates. Their venom is reported to be 15 times stronger than one of a rattlesnake, and can be fatal to small children, elderly or people with a weak immune system.

The strain is very potent Sativa dominant hybrid with THC content reaching up to  25%.

Black Widow (as well as its world-renowned cousin strain White Widow) is the work of the famous breeder Scott Blakey (aka Shantibaba) and it has won numerous awards, including 1995 High Times Cannabis Cup.

This hybrid is a combination of Brazilian Sativa and South Indian Indica hybrid. Most people describe its effect as calming and relaxed, so it is best to smoke it at the end of the day.

We are adding another notorious serial killer name to the list, and this time, it is probably the most famous of them all – Jack the Ripper.

A 19th-century murderer has been linked to killings of five London female prostitutes, who were dubbed “The canonical five Ripper victims”.

The victim’s mutilated bodies were found with their throats cut and abdomens completely butchered. The scariest part of the story is that the infamous Victorian serial killer was never  identified.

Jack the Ripper strain (or just JTR) shares no similarities with its name.

It is an extremely enjoyable weed that will boost your productivity and motivation to finish your daily tasks. It is rich in THCV, so you can expect not to get munchies after smoking JTR.

This Sativa dominant hybrid can also “break on through to the other psychedelic side”, so rookies should dose their usage carefully.

If you are thinking that there is nothing more terrifying than a twisted mind of a serial killer, you are wrong.

One event that occurred on April 26 of 1986 in Chernobyl plant near Pripyat, Soviet Union, will mark the beginning of a completely new level of horror that could only be compared to the atomic bombing of Hiroshima.

It is the deadliest nuclear disaster in history, and terrific consequences of this unfortunate event can still be seen today.

In 2005, the Chernobyl Forum report set the number on 9000 deaths that were directly linked to radiation exposure of the Chernobyl nuclear disaster.

But this number has been strongly criticized and other organizations (e.g. Greenpeace) estimated that more than 200,000 cases of cancer deaths could be attributed to the Chernobyl incident.

A total number of miscarriages, cancer cases and other diseases induced by radiation is still a subject of political and scientific controversy.

If I got you interested in this topic, and you haven’t watched Chernobyl, the highest-rated TV series of all time on IMDb, I can only suggest you put everything aside and dedicate 6 hours of your life to this television masterpiece. You won’t regret.

Chernobyl weed is a prodigy of three different strains: Trainwreck, Jack the Ripper, and Trinity. It is classified as a Sativa dominant hybrid, and its effect can be described as energetic and uplifting.

This strain is very popular among medical patients because of its euphoric but relaxing effect that lasts for a couple of hours.

As with all potent strains, you should be careful because there is a thin line between euphoria and anxiety.

Since we are talking about the Soviet Union, let’s remember another creation of their regime.

The KGB stands for Komitet Gosudarstvennoy Bezopasnosti (Russian) and it means Committee for State Security.

It is often described as the Russian equivalent of CIA with a slightly broader spectrum of responsibilities and secret operations.

During the Cold War, just a mention of a Russian spy would send shivers down the spine of anyone who was opposed to the Communist government.

Secret surveillance, brutal interrogations, blackmail, kidnapping, poisoning etc. are only some of the murky operations that KGB performed from 1954 until 1991.

Most of the KGB activities remain classified even today which only sparks people’s further obsession with this secret service. Just think about countless “Russian villain” characters that are often seen in Hollywood movies.

KGB weed is a completely different story. The name stands for Killer Green Bud, and the Soviet reference is just a mere coincidence. It is an Indica dominant hybrid that was created by crossing Burma and Afghani strains.

This strain is really potent, and you can expect long lasting couch lock after just a couple of blows.

I watched Jaws 20 years ago (for the first and the last time) and those terrifying shark attack scenes are still present in my mind.

If you haven’t watched this horror classic directed by the one and only Steven Spielberg, this could be a perfect movie recommendation to get you into the Halloween spirit.

As for the strain, there is nothing tense or scary about Shark Attack. It is a tranquilizing Indica-dominant hybrid that will bring about full mind/body relaxation.

Because of the high level of CBD, this strain is often used as a pain relief treatment among medical patients.

This crossbreed of Super Skunk and White Widow is very popular among cultivators because it doesn’t require much effort to grow while yields are usually very impressive.

This s(train) doesn’t have any deeper historical or movie reference, but the name itself is frightening enough.

Just imagine an empty train haunted by ghosts that never stops and you can never get off…or something along that line. It’s a perfect plot for a Halloween story.

There is another frightening thing about this s(train), besides its name. THC level that goes above 25%!

Ghost Train Haze is a winner of numerous Cannabis Cup awards, but being the 2012 winner of High Times Strongest Strains on Earth is really something else.

It is something that says: “Be careful, my friend, when you consume this THC giant. Large doses (which means anything more than a couple of hits) can turn a pleasant psychedelic experience into nasty paranoia.“

Ghost Train Haze is a crossbreed between Neville’s Wreck and Ghost OG. It is a Sativa dominant hybrid and if you consume it correctly, you can expect a happy and uplifting effect.

As you can see, most of these “scary weed” strains actually end up healing, calming or uplifting you. As I see it, that’s exactly what Halloween is (or should be) all about. 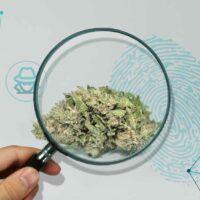 Pennywise is also a very potent strain with a scary name!!!!! Breeder: Subcool