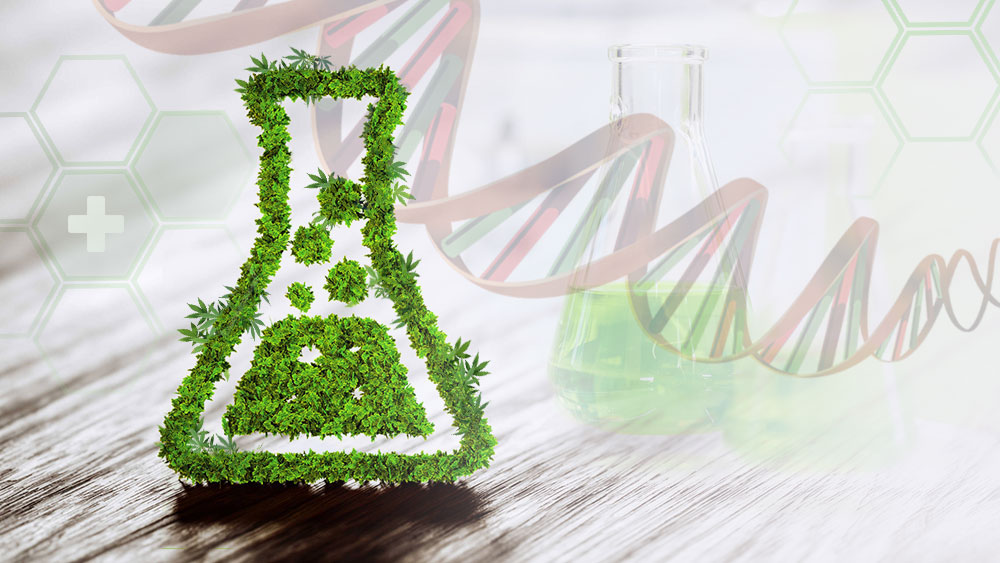 Many misinformed people wrongfully associate synthetic cannabis with the actual plant, and today we’re going to discuss why the two are extremely different.

I’d like to point out in advance that the moral of this story is to stay away from “synthetic weed” as far as possible, and if you have a teenager in the house you should rationally explain how detrimental these substances really are, and that some types of synthetic weed can easily lead to overdose and death.

The reason why artificial cannabinoids are legal is pretty cunning, as they exploit a loophole in the law which shouldn’t even exist.

Synthetic cannabinoids came to existence because scientists wanted to explore the medicinal properties of cannabis, but the global illegality of pot crippled their research to a great extent, which is something that hasn’t really changed to this day.

Researchers realized that it would be much easier for them to get all the necessary clearances if they created new compounds that are very similar to THC.

One of the first that was ever created, called CP-55,940, greatly contributed in the discovery of cellular endocannabinoid receptors in the early 90’s. These receptors are a very important part of the endocannabinoid system, which is also known as the ECS.

The ECS is essential for maintaining health and homeostasis in all vertebrates, and the aforementioned endocannabinoid receptors are the pathway through which cannabinoids create their medicinal effects.

Some synthetic cannabinoids similar to THC are still used for research, and they are present in cannabis-based prescription medications such as Dronabinol (sold as Marinol or Syndros), and Nabilone (Cesamet or Canemes).

So what makes synthetic cannabinoids so different from plant-based ones?

The difference between natural and synthetic cannabinoids

Even though they are structurally similar, the main thing that separates naturally occurring and artificial cannabinoids is their potency, or more precisely their ability to influence the endocannabinoid receptors in our bodies.

Some synthetic cannabinoids are 50 times more potent than their natural counterparts, and this is especially hazardous when someone is buying synthetic “weed” from unreliable sources.

Pharmaceutical companies don’t take kindly to lawsuits, and they are perfectly clear in their dosing instructions for synthetic cannabinoid medications, because they know how dangerous it can be to consume too much of these compounds.

Unlike synthetic-cannabinoid prescription drugs, products that end up on the street don’t go through meticulous tests of quality and purity which are mandatory in the medical realm.

In a nutshell, this means that street-sold “synthetic weed” products have an unknown potency, and too much of these compounds wreaks havoc to an organism, and can even cause death.

Side effects differ depending on both the amount, and the type of synthetic cannabinoid consumed.

As you may have noticed, many of these side effects also occur when too much cannabis is consumed, but because synthetic cannabinoids are much more potent than those found in the cannabis plant, the severity of the side effects proportionally increases.

Users who experienced a full-blown overdose from synthetic cannabinoids reported major issues of the central nervous system such as coma and psychosis, cardiovascular issues like tachycardia and bradycardia (increased or decreased heart rate during resting), and lung-related issues such as respiratory depression (which is the main cause of death with opioid-related overdoses).

There have been multiple reports of users going through powerful cravings and compulsions to take another dose upon consuming these substances.

Gruesome withdrawal symptoms have also been reported, showing that the use of synthetic cannabinoids creates a really serious addiction, which is in direct contrast with cannabis, where moderate dependence is the worst that can happen.

Herbal mixtures that contain synthetic cannabinoids are sold by many different names, the most notable being K2 and Spice.

This synthetic cannabinoid addiction support website lists out over 700 different brand names, but as some artificial cannabinoids become identified and end up being listed as illegal, brands with new cannabinoid formulations continue to sprout, evading regulation. 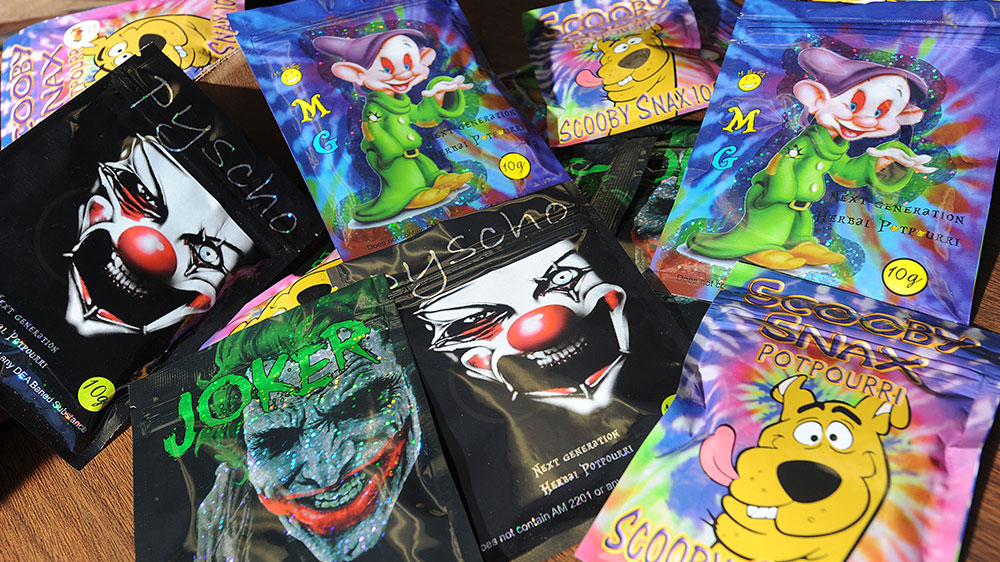 Formulas and other production techniques for synthetic cannabinoids can be found online, so these compounds are also being sold without any “official” packaging.

How to differentiate real from synthetic cannabis

The easiest way to tell apart real from synthetic weed is by texture.

Herbal blends that are sprayed with synthetic cannabinoids always come in a shredded (or crumbled) form, and manufacturers cannot imitate the complex structure of a cannabis flower.

Another way to determine if it’s synthetic or real is by the smell.

Compounds that are responsible for the way cannabis tastes and smells are called terpenes, and there is a great number of them in every weed strain. Because of this, there are so many different aromas and fragrances in the cannabis world such as fruity, skunky, earthy, pungent and so forth.

Synthetic weed can’t replicate these fragrances, and it usually smells like the herbal blend being used to “carry” the artificial cannabinoids.

The price is also a great way to determine if the cannabis in question is real or synthetic, because artificial weed is several times cheaper than the real thing.

For instance, a gram of high-quality cannabis will set you back at least 10 dollars. For the same price you can get several grams of synthetic weed.

If you’re fearing that something you plan to consume isn’t a real cannabis flower (and you cannot conclude by the previously mentioned methods), I would strongly advise you not to smoke that joint.

What does synthetic weed contain?

Besides synthetic cannabinoids (which are the main active ingredient of synthetic weed), the mixture contains various herbal blends.

These blends include non-psychotropic plants such as marshmallow, blue violet, water lilies, dwarf skullcap, alfalfa, nettle leaf, rosehip, honeyweed and so forth…

Other psychoactive plants are sometimes added, like Wild Dagga and Indian Warrior. Also, psychoactive alkaloids nicotine, leonurine, nuciferine and aporphine were also found in some blends, and in some cases synthetic opioids were detected in the mix.

Packages of synthetic weed are usually labeled like “herbal incense”, “potpourri”, “natural herbs”, “air-freshener”, and some even contain the disclaimer “not for human consumption”.

Some people who would preferably consume real cannabis decide to go for synthetic weed because it usually can’t be detected by most cannabis tests.

Over 140 different synthetic cannabinoids have been identified so far, which makes detection really challenging.

Health and addiction risks are immense with this group of substances, which is something people generally don’t comprehend at first glance, because it’s is masked with a “badge” of legality.

Terms like “synthetic weed” and “synthetic cannabis” are also play a great part in this issue, as they give a false sense of security.

Gullible new users could evaluate the circumstance like: “If it’s like weed, how bad can it be?”

This entire situation is saddeningly absurd.

When we consider why was cannabis made illegal in the US (the rest of the world was quick to follow), it becomes apparent that all of this could have easily been avoided.

If you’re not familiar what was happening with weed a little less than a century ago, I suggest you give this article a read, because it’s very connected to this subject matter.

Essentially, a handful of very powerful people from different industries joined forces to forcefully influence the public’s opinion on pot, in order to prevent cannabis from entering the realms of medicine (a plant cannot be patented), and business (hemp has an extremely wide industrial potential).

Decades later, scientists begin rearranging the molecular structure of THC and have created new compounds just so their research could avoid the draconian laws real cannabis is submitted to.

Subsequently, immoral businesses copy their work and create new versions of artificial cannabinoids, and as these substances aren’t identical to THC, they temporarily escape the clutches of illegality.

The last piece of the puzzle are the consumers of synthetic cannabinoids, and because these mixtures are really inexpensive, the largest percentage of users are at the lowest levels of society.

So, we have people who become severely addicted, frequently overdose and even die from an artificial substance which was originally created to serve science, because science wasn’t allowed to study genuine cannabinoids from the plant.

All of this is happening because a few influential people shaped the opinion of masses so they could outlaw the most beneficial and medicinally versatile plant on planet Earth.

5 thoughts on “Synthetic Weed: The Furthest Thing from Real Cannabis”