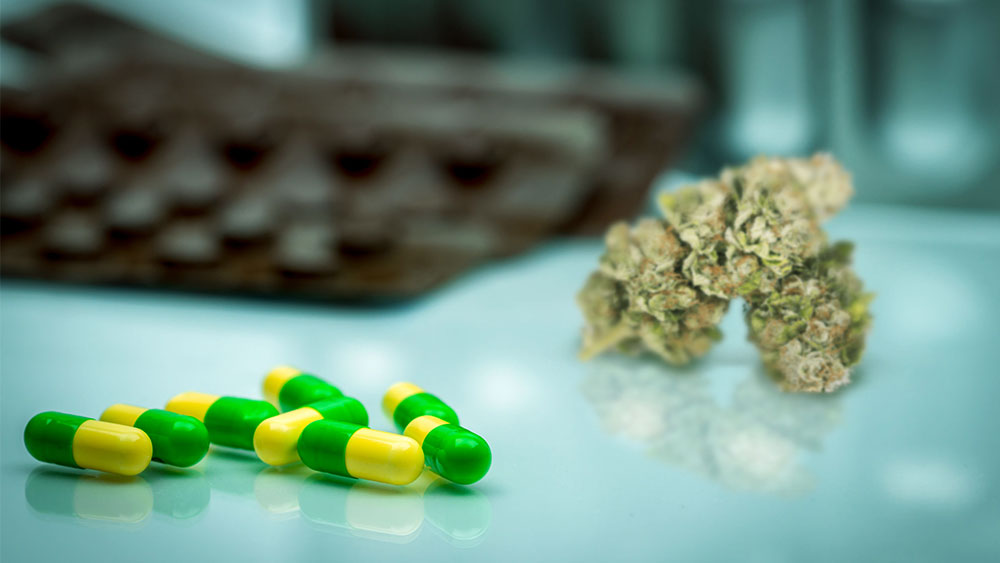 Several factors influence how a human body will respond to cannabis and tramadol combined. The most important is probably a user’s potential reason for using this combination.

There are two distinct reasons why someone would combine weed and tramadol:

Although both reasons imply the consumption of cannabis and tramadol at once, what primarily separates them is the mindset, and the end-goal of a user.

Hazardous outcomes are much more likely to happen with recreational users, as they are usually much less cautious with the dosing of tramadol.

The biggest danger of mixing cannabis and tramadol is the depression of the central nervous system.

Tramadol and cannabis for pain

Unlike numerous other opioid analgesics, tramadol is not prescribed for continuous use for chronic pain, but rather for pain that isn’t expected to last for a period longer than 6 months.

Tramadol influences several distinct mechanisms within the body, including binding to μ-opioid neural receptors (like classical opiates, for instance, morphine).

Similarly to other opioid medications, tramadol is considered to be highly addictive, and carries a high risk of abuse.

On the other hand, using cannabis for chronic pain is cited as a primary reason for medical cannabis prescriptions in the US.

Unlike tramadol and other opioid medications, cannabis uses a completely different pathway in the body to diminish the sensation of pain, more precisely through cellular receptors of the endocannabinoid system.

This basically means that these substances can be used in combination, as they cannot “overload” the same systems in charge of lowering pain sensations.

Moderation is key in such instances, and both tramadol and cannabis doses should be thoughtfully planned out.

An animal study (1) from 2019 corroborates this beneficial cohesion of opioids and cannabis.

The researchers were using a synthetic drug that mimics THC (a major constituent and the main psychoactive cannabinoid found in cannabis) in combination with morphine.

The study was looking to determine whether cannabis and opioids in combination offer a safe way for patients suffering from pain to lower their opioid intake.

The results showed that combining these substances did not increase impulsivity and memory impairment in rhesus monkeys, compared to using THC and morphine separately, and that their combined use does offer a safe treatment to opioid users, lowering the risk of becoming addicted to these drugs.

These data provide additional evidence supporting the notion that opioid-cannabinoid mixtures that are effective for treating pain do not have greater, and in some cases have less adverse effects compared with larger doses of each drug alone.

Because both cannabis and opioids are known to impair cognition, the researchers’ biggest concern was that the combined use of these substances could additionally hinder cognition, but according to the results, this doesn’t happen.

Impulsivity and memory impairment were analyzed with various tests, and the test subjects performed best when they were given both substances together, compared to just morphine or THC alone.

While clinical trials would need to be conducted to confirm whether these results translate to humans, monkeys tend to process drugs similarly to humans and are considered a good model for cognition.

Tramadol and cannabis for recreational purposes

The biggest danger of recklessly consuming tramadol and weed at the same time lies in the depression of the central nervous system (CNS).

Opioid drugs are a well-known class of CNS depressants, and cannabis is currently understood as a stimulant and a hallucinogen, but also a depressant.

This essentially means that weed can act either as a stimulant (rapid heartbeat, anxiety, paranoia), a hallucinogen (altered perception of time or space), or a depressant (slowed breathing, low blood pressure and dizziness).

Depending on the user, type of cannabis, quantity of cannabis taken and the situation itself, cannabis can produce a wide variety of different effects.

The worst possible effect for combining tramadol and cannabis is when weed also acts as a CNS depressant, which usually happens with sedative indica strains, or concentrates made from indica varieties.

Central nervous system depression is a physiological state of decreased heart rate, decreased rate of breathing and loss of consciousness that can lead to coma or death.

While cannabis cannot depress the central nervous system to such an extent that it becomes dangerous, large quantities of opioids such as tramadol definitely can.

Also, since both tramadol and cannabis impair cognition and affect judgement, it is possible for the user who is under the influence to unintentionally take a larger dose of tramadol, increasing the risk of CNS depression.

In a nutshell, this means that these substances cannot be taken carelessly, because the consequences could be extremely dire.

Human research on opioids and cannabis

The only available research on the correlation between opioids and cannabis on humans comes from a 2019 survey (2) conducted by the University of Houston.

The 2019 survey gathered data from 450 adult participants who experienced moderate/severe pain for a period longer than 3 months.

The results of this analysis were unfavorable, and found that individuals who combined the use of opioids and cannabis are more likely to have increased depression, anxiety and substance abuse (alcohol, cocaine, sedatives and tobacco), compared to those who use used opioids alone.

This survey was heavily criticized, primarily because the only time frame given was 90 days – meaning that the use of both cannabis and opioids happened somewhere during those 3 months, but the quantity and frequency of use were not specified.

Participants could have used cannabis or opioids only once in the 90-day time frame, which makes drawing direct conclusions very difficult, if not impossible.

Numerous other factors that could have contributed to substance abuse, anxiety and depression were completely overlooked.

Even though research is very scarce, the analgesic properties of cannabis make it a valuable asset for diminishing tramadol doses.

If you’re looking to implement cannabis into your tramadol pain regimen, make sure to:

On the other hand, if you’re looking to recreationally experiment with opioids and cannabis, please steer clear from it, as opioid drugs are extremely addictive, therefore exceedingly dangerous and not worth the risk.

I’d like to end here with a quote from a 2018 review paper (3) entitled “Emerging Evidence for Cannabis’ Role in Opioid Use Disorder”, published in the Cannabis and Cannabinoid Research journal.