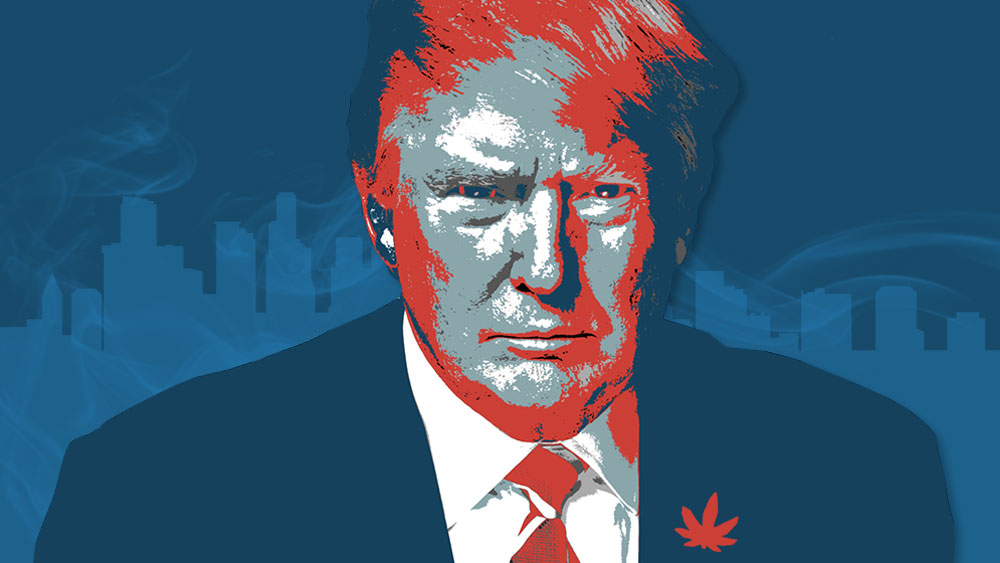 Reports that President Trump is planning to push for legalized marijuana are becoming more often as we approach the midterm elections.

President of the United States Donald Trump hasn’t been very popular so far, even though he ran on a populist platform.

That platform was based on feelings of fear, anger, uncertainty and most of all—hatred. Hatred towards Muslims, Mexicans and immigrants.

It is sufficient to say that he isn’t the most beloved president ever, but there’s a chance he could sneak his way in the top 10 list.

Trump’s plan for the second half of his presidency may revolve around getting cannabis federally legalized by the end of his first term.

Reports of President Trump planning to legalize recreational marijuana have been circling the news.

Many Americans thought that the legalization would have to wait for Democrats to have the full control of the Congress.

However, so far we’ve noticed that Trump isn’t a classic partisan president. Going for cannabis legalization seems like a total Trump move.

So, let’s take a look at the few important things that happened in the last couple days.

The Drug Enforcement Agency released a new assessment on drugs, in which it called for an immediate and undivided offensive against opioids and prescription medicine.

Opioid prescriptions in the United States have been on a steady rise for years, and president Trump declared it a national crisis earlier in the year.

The DEA reports that heroin-related deaths almost doubled between 2013 and 2016.

DEA also noted that the increase in opioid abuse led to a direct increase in heroin abuse and heroin-related deaths.

The increase in the abuse of prescription drugs is due to a huge presence of illicit fentanyl and synthetic opioids.

Medical cannabis has shown to be a good method for pain management. It is not unheard of that opioid addicts switch to cannabis, in search of a more natural alternative.

In fact, in some areas where medical cannabis got legalized, a number of opioid addicts dropped their habit in 6 months or less.

Some might say fighting opioids with cannabis is fighting fire with fire, but for some people, it’s a lot better than not fighting at all.

Also, during summer, the World Health Organization advised governments around the world to remove CBD from the list of scheduled substances.

A lot of Republicans confirmed the rumor

According to the former White House Communications Director Anthony Scaramucci, Trump is indeed planning on legalizing cannabis after midterms.

Anthony Scaramucci worked at the White House, and it is not certain whether this is just his hunch or a real plan on Trump’s behalf.

However, he is not alone in those claims.

Congressman Dana Rohrbacher (R-CA) is also on the record saying that plans are already in the making.

Rohrabacher said in an interview with Fox Business that he’s been talking to people in the White House and Trump’s inner circle.

He said that the legalization effort could start as early as spring of 2019.

“I would expect after the election we will sit down and we’ll start hammering out something that is specific and real,” the congressman said.

Trump showed support for a bipartisan bill from the Senate which was led by Senator Cory Gardner (R-CO) and Senator Elizabeth Warren (D-MA).

Attorney General Jeff Sessions is on his way out

One of the major talking points whenever someone brings up the point of federal legalization, whether it’s medical or recreational marijuana, is the “Jeff Sessions won’t allow it” one.

But I have some good news.

US Attorney General Jeff Sessions may be on his way out of the office sooner than what most of us thought. I know I thought he was going to be in office for the whole term.

Senator Lindsey Graham mentioned on The Hugh Hewitt Show this week that Attorney General Jeff Sessions might be stepping down after midterms.

“Jeff will probably step down. We’ll have a new attorney general most likely early next year, ” senator Graham said.

That’s right, the same Jeff Sessions that said a few months ago that “a lot of heroin addictions start with marijuana” is rumored to be leaving office in a few weeks.

This is a big part of Trump “setting up the board” for cannabis legalization.

Sure, Sessions couldn’t block the legislation in any way or insist on the law to be one way or another, but he could have obstructed it.

Sessions wanted to do a huge federal crackdown on marijuana businesses earlier this year, but that didn’t go well.

He came down on the states which already legalized marijuana by rescinding the Cole memo, but that didn’t help his cause much as well.

My guess is that he finally realized that the general trend of legalizing marijuana is about to hit the federal government too.

He didn’t want to be a part of it before he took the job, and he is still one of the strongest proponents of marijuana prohibition.

That is why once the legislation is announced I truly believe Senator Lindsey’s words that he’ll resign.

Thank you for this current info. Do you think this is political maneuver by Trump to avoid impeachment and that he'll drag out de-scheduling cannabis for years?

I can't really say, I'm not a political commentator/spectator, I'm just reporting the news. I'm hoping that he won't drag it out, of course. But, knowing the Republicans, that might just be the case...

Impeachment for what? No because he is not stupid and realizes there is more benefit to allowing it rather than fighting it. If you also recall Bill Clinton was impeached but not removed from office. If data shows that this has reduced the opioid deaths and addictions (which the president has declared war on opioids)

Agreed with Damon. Thanks for reporting, hopefully you get better at reporting and not adding so much opinion to your articles (it shows).

Hey dude, I'm totally unbiased in regards to US politics. I really don't see a point in being biased towards Dems or Republicans. I dislike them both equally. I dislike Trump personally because of the things he says out loud without a grain of shame, but hey, that's also a part of politics so who cares really...But I do hope that he'll legalize weed in the US, I might like him more because of that :D Also, I'm not a reporter, and if you are looking for straight up reporting, this isn't the place for you my friend. We often add our opinions to articles we write here because we feel it also adds a personal touch. I report on some stuff, but I also comment on it a lot of times. That's just our style, that's how we roll.

Jefferson Beauregard Sessions III was/is a Bufoonish prohibitionist stooge! He’s stuck in the 80’s “Just say no” Nanny Nancy Reagan era. Saying he’s out of touch is an understatement. I’m also really glad the other “Reefer Madness” inflicted Sessions got booted out. I’m referring to Pete Sessions. He blocked any/all cannabis bills that came his way. That why for two years no cannabis bills made it to the House floor. Go figure, House Republicans. Who knew?

I guess you could say that...we survived the all those terrible sessions. *horatio caine meme*

Alex really great article. I am in the same boat as you. Partisanship is infantile. IF Trump actually follows through with this would be amazing. We will see

Thanks. I believe he can, it's definitely within his powers, just not sure if he'll stick to his word, he's been known to flip-flop... we'll see I guess.