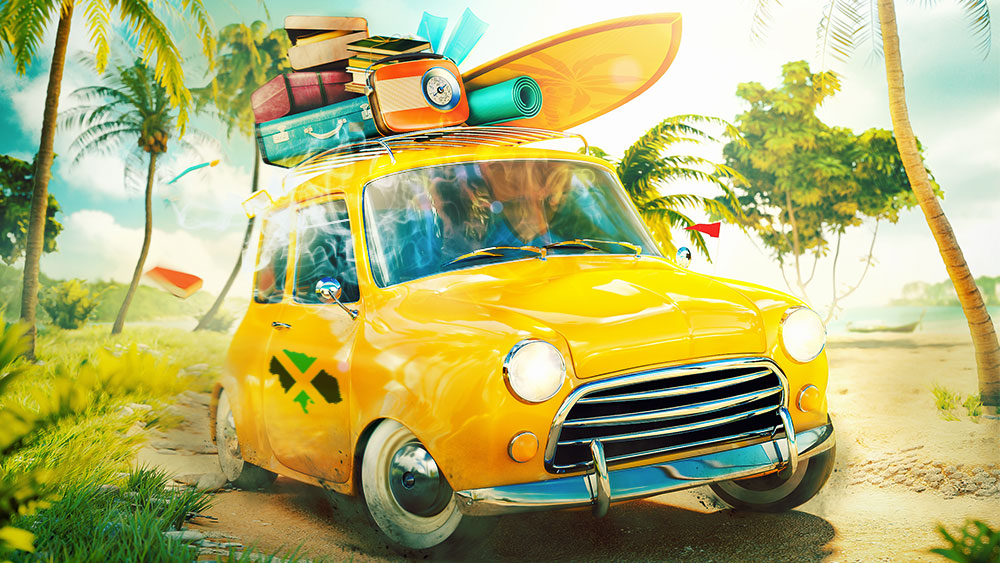 This is a story of how cannabis became a big part of the Jamaican culture, and how the two influenced the world.

Jamaica is a small island nation located in the Caribbean Sea. It is a charming little place filled with welcoming people, beautiful beaches and, more importantly, some of the best weed in the world.

But don’t call it weed in front of any Jamaicans, as they’ll correct you with their preferred term for cannabis—ganja.

Jamaica is the go-to destination for many people looking for a place to relax, spend time high up in the mountains and go down to the beach all in the same day.

However, Jamaica holds something even more unique that you won’t find anywhere else in the world:

A one-of-a-kind religion that has spread like a wildfire across the world and gained many supporters in various places.

Afrocentrism as a Defining Culture

The history of Jamaica is quite extensive. It starts with the Arawak and Taíno indigenous people, which settled on the island between 4000 and 1000 BC.

Early in the 16th century, Jamaica was “discovered” by the Spanish, and it became a colony of the Spanish crown.

However, the Spanish were forcibly evicted by the English in the 1655 Invasion of Jamaica.

At the time, there were still Taino people on the island, but the slave trade was starting to ramp up. Jamaica was a good spot for ships to take a break on their way to North America from either Africa or South America.

Fast forward to today, and over 90% of the population in Jamaica is black.

Jamaicans of African descent who rejected the British imperial culture started listening to a great Jamaican leader and motivator of the masses, Maces Garvey. He took it upon himself to educate the Africans around the world of their history and heritage and that’s how the Rastafari movement started, and how Afrocentrism was born.

Return to the Promised Land

Praising Africa as the Motherland (“the promised land”) became part of the Jamaican culture and part of Afrocentrism.

Over the years, many Rastafari members called for the resettlement of Africa, particularly Ethiopia, which they saw as their rightful homeland because it had Zion, The Promised Land.

It was also the only place in the world where a black man was a king.

Marcus Garvey said in 1920: “Look to Africa, when a black king shall be crowned, for the day of deliverance is at hand,” and Jamaicans recognized the rise of Haile Selassie to power in Ethiopia in this prediction.

The term “Rastafari” was coined by putting together the term “Ras” (duke or prince) with “Tafari Makonnen”, which was Haile Selassie’s birth name.

The idea of the repatriation of Ethiopia marked the first three decades of the Rastafari movement (1930s to end of 1950s), and later it turned into a metaphorical, romantic ideal.

Haile Selassie was removed from the throne in 1974 and died a year later at the age of 83. His death was followed by a coup d’état.

By the time the ‘60s ended, and the ’70s rolled around the corner, the Rastafari movement went global.

The combination of a very liberal religion closely tied to Christianity, quality music that called for a rebellion, ganja, and a new hairstyle took the world by surprise.

And, of course, one polarizing personality and the band behind him also had a major part in spreading the word of Jah: Bob Marley and the Wailers.

Bob Marley and his dreadlocks had such a profound effect on his listeners that people started blatantly copying his style of music and dressing. They still do, to this day.

The more popular the Rastafari religion became, the more it became closely tied to reggae music and smoking marijuana, which became part of the Rastafari ceremonial traditions.

The Fight Against Babylon

Reggae music has several recurring themes: Praise Jah, the Fall of Babylon, the return to Zion, and the Judgement day.

The Rastas refer to the authorities that rule the world as Babylon.

They believe that humanity will enter a “new age” once Babylon has been destroyed, and those who support Babylon will be denied access to paradise.

The most popular recurring theme is the fight against Babylon, with just about every reggae musician and group mentioning it in their songs:

Bob Marley: Babylon your throne gone down, gone down

Jah Warrior: All of you shall witness the day Babylon shall fall

Yami Bolo: Babylon is out of control, in a gangsta role

The theme of Babylon falling, or being against the people stretched out to the New Wave of reggae as well, with foreign bands aiding in the fight against Babylon.

Slightly Stoopid: Babylon is falling down, everybody losing control

A major reason why the fight against Babylon or the future fall of Babylon is so often mentioned is the Jamaican opposition towards institutions.

But, Rastas and Jamaica are not opposed to all types of institutions. Just those that forbid you from practicing religion and traditions.

Seeing how cannabis was a big part of Jamaican culture and Rastafari religion, it was increasingly becoming a problem in the US where reggae was gaining in popularity by the day.

Combine that with the already powerful anti-war hippie sentiment spreading through the United States, and you get the #1 enemy of weed—the federal authorities in America.

Given its illegal status all over the world at the time, cannabis had lots of supporters but not very many of them would dare go against the US federal government.

In short, “the fight against Babylon” represents the Jamaican way of opposing the conflicting institutions that are simply put—acting out of pocket and carelessly towards the people and the environment.

The anti-cannabis sentiment was very clear in the US, and the US was known for pushing its agenda onto smaller countries. There are even theories that Bob Marley was poisoned and killed for the purpose of stopping the spread of marijuana.

Bob’s fight against Babylon almost came to an end in 1976 when seven men with guns raided Marley’s house in a robbery and shot him in his chest and arm.

Once the assailants were caught, one of them admitted during the trial that the job was done for the CIA in exchange for cocaine and guns.

In an interview for Channel 9 television, Bob Marley gave one of the most legendary statements ever regarding money and his view on richness.

Sadly, his life didn’t last long. It ended a year after that interview.

Conspiracy theories about his death started circulating quickly, and the prevalent theory is that the CIA gifted him a pair of shoes infected with malignant cancer cells, which he later contracted by trying them on.

Bob Marley’s imprint in the world will be forever. He first gave a voice to a community that now has representatives all over the world.

He also pushed for the legalization of the cannabis plant which is now happening in the US. One could say that he lost the battle, but ultimately won the war.

Cannabis most likely came to Jamaica in the 1850s from Africa or South/Central America.

Rastas use ganja for spiritual and ceremonial purposes, and they call it various names: callie, herb, grass, and the holy plant.

They argue that the use of ganja was written in the Bible, which Rastafari heavily leans on.

In the early days of 1941, Leonard P. Howell set up a Rasta community (later named Pinnacle) of sixteen hundred Rastas high up in the mountains.

The community discovered the properties of ganja that helped their reasoning process and started growing it as a cash crop.

However, the use of cannabis for religious purposes wasn’t accepted anywhere else because many countries had prohibition laws. This brought big problems to the Rastas abroad who were passionate users.

In the ‘70s and ‘80s, Rastas all over the world were being persecuted, and no fights in court ended in a win for the Rastafari religion and the right to consume a plant for traditional and ceremonial purposes.

Today, however, cannabis is legal in many places across North and South America. Cannabis took over most of Jamaica as its national crop, and cannabis tourism is huge there.

It would seem that the struggle for freedom and the fight against Babylon has finally paid off.

Lamb’s Bread, or Lamb’s Breath as the Dutch sometimes call it, is an authentic Jamaican (landrace) strain.

According to rumor, it was Bob Marley’s favorite strain.

Lamb’s Bread is a pure Sativa, which is traditionally grown on the slopes of the Blue Mountains, on the East part of the island.

It is a THC-potent strain, with an average of 14% THC and low CBD content. Just like most other Sativas, it makes the user happy and uplifted.

So next time you’re in Jamaica, follow the steps of Uncle Bob and light up some Lamb’s Bread. It will surely help you appreciate the island fully.

Great article Alex. Leonard Howell was introduced to cannabis by the Indian indentured servants who came to replenish plantation labour force once slavery was abolished. They had carried the practice of smoking the herb it with them.