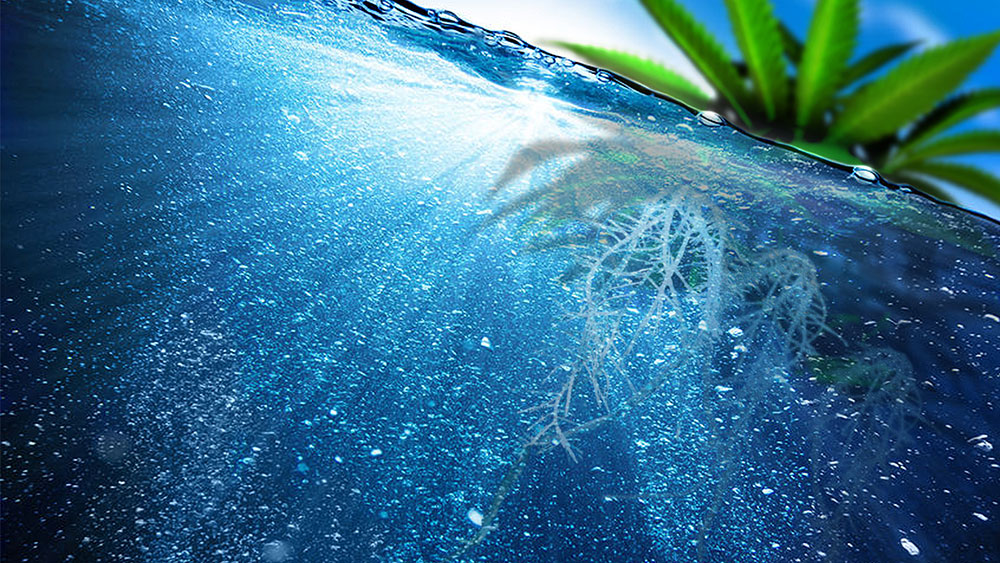 This hydroponic technique relies completely on flooding and draining the plant roots at certain periods of time. Floods can be disastrous, which is definitely not something you want to happen if you are growing indoors.

Another reason, which is kinda closely related to the previous one, is that cannabis is often grown illegally, which means it’s grown in hydroponic systems indoors.

Having a flood on your hands as an illegal weed grower is the last thing you would want in week 8 or 9 of your grow… Not that we’ve ever grown weed illegally.

Just type your email in the box below, hit the magic button and I’ll send you a free eBook which explains everything you need to know about hydroponic growing, including detailed guides for all 6 popular growing methods.

As previously mentioned, Ebb and Flow is a hydroponic growing technique which uses gravel, clay pellets or lava rock as a growing medium.

These systems periodically flood and drain the plants with nutrient enriched water. 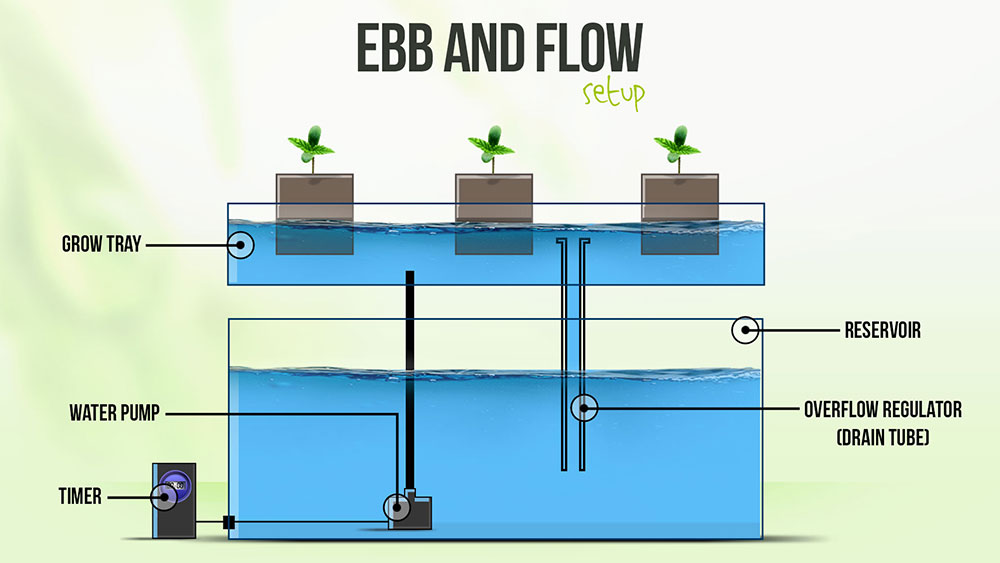 The rounds of flooding and draining make it seem to the plant as if it is “drowning” in a sense, and here’s why:

However, since these rounds of flooding only take several minutes, and then the water is drained, the roots are not submerged for the whole duration of the grow, which is the main difference when compared to Deep Water Culture.

So, what happens with oxygen and how do the plants get the necessary amount of oxygen to grow properly?

You might be familiar with air stones and their role in oxygenizing roots in Deep Water setups, but given that Ebb and Flow technique relies on water from one tank flooding the plants which are held in a different container, which means that the water moving around won’t be properly oxygenated.

The flooding periods practically “drown” the plant, making it ache for oxygen, which is where the draining periods come forth. During those periods, the roots are not flooded and they absorb enormous amounts of oxygen, until the next flooding period.

Adding an airstone to the tank increases the oxygen levels in water, and could also reduce the risk of pathogens and other problems appearing in the water.

In the world of homemade hydroponic systems (which is a much bigger world that you would think – since nobody smart talks about illegal weed growing ops) we differentiate two basic ebb and flow systems.

The first type is the so called “containers in series” which is aptly named, due to the fact that each plant has it’s own container, which gets flooded at the same time as all other containers.

The containers are connected all together in a series, which means they should be set on a hard surface at all times due to flooding periods. It is important to not that the overflow tube height sets the water level

This means that you should always keep your containers above the water reservoir – on a bench, or table, or anything similar that will hold its weight.

The second type is called “flood tray design” which works around all plants being in one big tray, which gets flooded periodically. This design is used for when you want to be moving your plants around, which is not something you do often when growing weed.

However, flood trays have been a more popular design when it comes down to low-level small indoor weed ops, due to the fact that they are much easier to assemble.

That, and the fact that we always like to do things the harder way – because if it doesn’t suck, we don’t do it (we like to think of ourselves as the US Marine Corps of weed).

In this section, we will be talking about how to make your own Ebb and Flow cannabis grow, in both the flood tray and series designs. So without further ado, here goes nothing.

How to Make an Ebb and Flow System in 5 steps 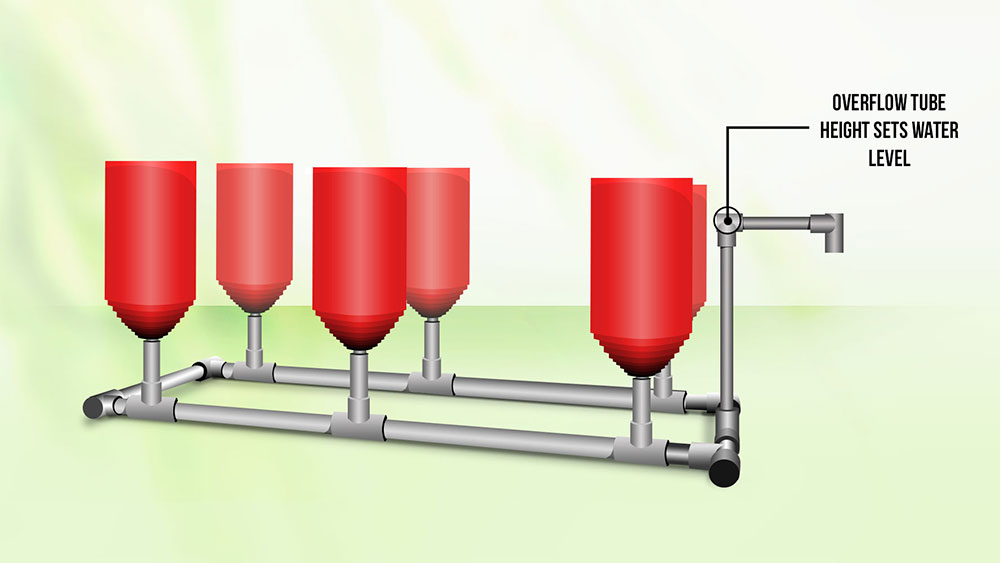 Add the overflow tube to your system. This tube connects to the system where all the containers are connected together.

When water reaches the top of the overflow, it spills over and goes back to the reservoir to be pumped through the system again, which means that setting the height will determine the water level during flood periods.

Set water height in all containers by adjusting the height of the overflow tube.

Connect your system to the reservoir, add nutrients to water and add plants to the containers. Make sure you don’t forget to plug in all things that need plugging such as the water pump (plug in power and connect all tubing to it) as well as the air pump. 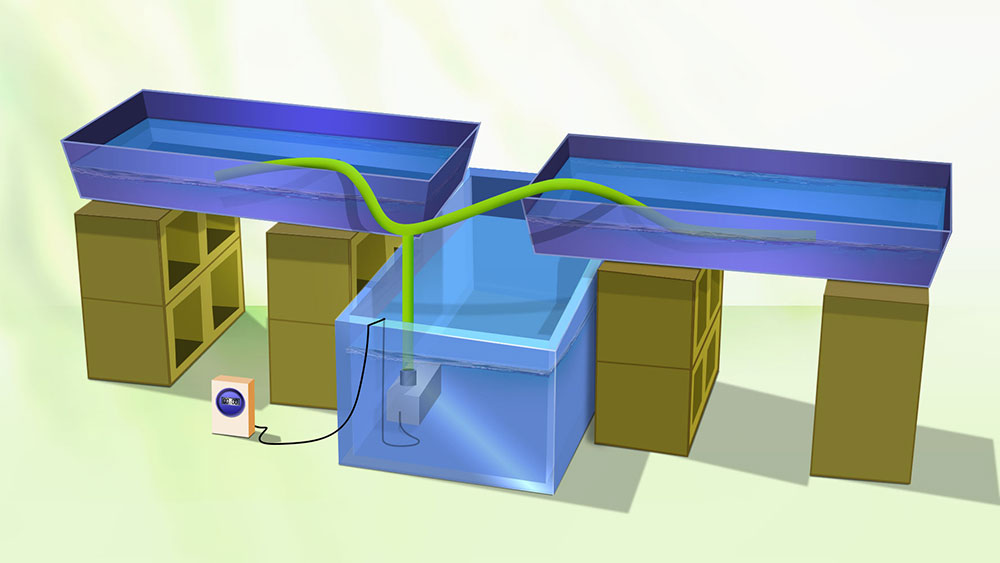 Place two large, relatively shallow trays on a flat surface, but make sure there is enough room between or below them to fit the reservoir.

Connect all the tubing. Place the reservoir nearby (optimally below) the flood trays, fill it with water and connect to the water and air pumps.

Make an overflow tube, in both flood trays of course. This is why leaving some room below them (as in the graphic above) is a must do – you will basically have a hole in your flood trays, which will be then filled with a tube (actualy 2 tubes, one for each tray) and when water overflows, it will fall directly back in the reservoir.

Add nutrients to water and add plants to the flood trays.

Plug in the water and air pump into power outlets and enjoy.

Thank you for reading our guide on Ebb and Flow, and other hydroponic systems. We sincerely hope hope that you liked them as much as we did.

If you give one of these hydroponic systems a try, make sure you let us know and send us some product. To test, you know.

Great post! I've always been a soil grower, but have been toying with the idea of switching for a while now. Between this post and some of the others on hydroponics systems you have on your site, I should have all the info I need. Thanks!

Thank you Steven, it means a lot to me knowing that people find our articles useful. I would also recommend you go to this page and sign up for a free ebook on hydroponic growing. I wrote that book, and this article is one of the segments in it, just follow this link: https://greencamp.com/hydroponic-weed-growing-guide/ Cheers

Great detailed article,Alex. It would be nice if you could compile a links for shopping list on Amazon.

Hey Ryan, I'm glad you liked the article. Let me know what you are lacking to finish the setup and I'll tell you my opinion. Feel free to send me an email!

Great article Alex. I'm new to hydroponic cultivation and was looking for some good tips. Yours helped definitely. Thanks again.

Thanks! Did you manage to download the eBook on hydroponic growing that's on this page?

Do you know where can I get drainage fitting for nft pipes?

yeah, Amazon. If you can't find the fitting pieces there I suggest you visit the local hydroponic store and talk to the employees there regarding the specifics of your build.

Thanks a ton to Alex for sharing real gold here. Though, I've one question if you take time in answering then it would be a great help mate. Is it ok if we mix fertilizer in the water or we can mix only nutrients in liquid form?

You don't understand the point of ebb and flow. You need a drainage whole and an overflow tube. You can't just pump from the reservoir over the sides of the plant container and rely on the overflow to drain... Your roots will drown, because the water level will stay the height of the overflow tube without a way to drain.

I believe he has no check valve on his pump (most do not) and relies on reverse flow through the pump when the timer shuts it off. A more reliable system would add an autosiphon (below the level of the overflow) that begins draining the trays before the timer shuts off the pump. This allows for 2 drainage paths for the nutrient solution, with a shorter "drowning" period. (3 drainage paths if you count the overflow)

Thank you for this awesome guide!! I like DIY projects and Ebb and Flow system is easy to make even with basic components at home. Hydroponic gardening is the future of food security.