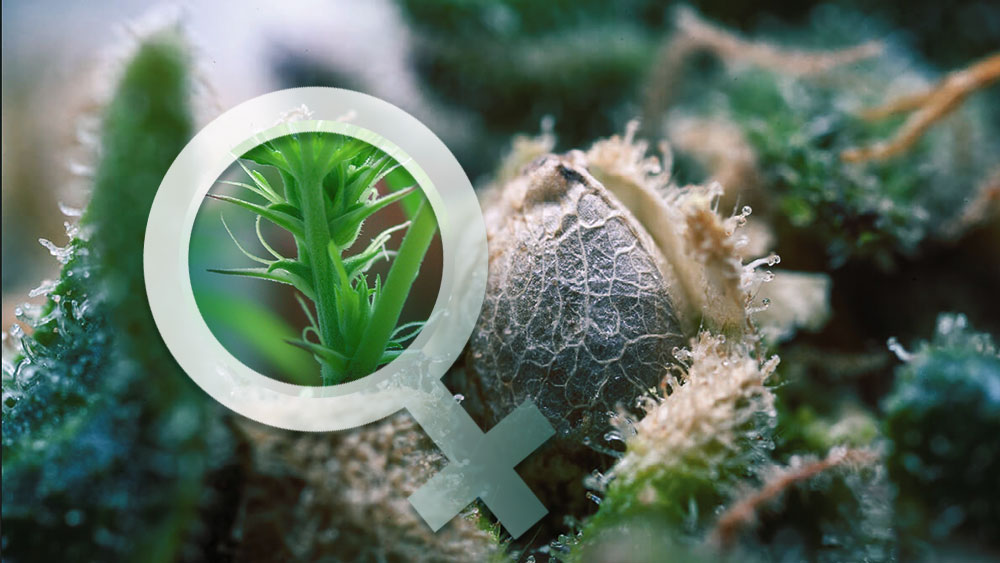 Most people are already aware that cannabis buds we use today come only from female plants.

Just like children, some seeds end up being female and some male. That’s just how nature works.

A male plant can pollinate a whole room of female plants. Even if there were 50 plants in that area, all the male plant requires is a bit of wind, and each female plant will end up being fertilized.

Getting only feminized cannabis seeds is not an impossible task, you just have to work around the rules set up by nature.

Why are seeds feminized?

Cannabis growers need seeds that are guaranteed to grow into female plants, in order to avoid pollination of the entire crop.

No one wants seeds in their weed and because of this issue we require feminized seeds.

When you’re certain that all your seeds are feminized, you can grow big crops knowing that your plants are safe from pollination by a male plant.

As cannabis becomes legal in more places throughout the world, feminized seeds are the first small-time thing new growers will start looking for.

Reliably producing female plants is of great value in this industry, because only female plants produce flowers with medicinal value.

How to feminize seeds?

When breeding cannabis, growers will intentionally pollinate their females in order to get certain traits in the offspring.

However, sometimes the breeder isn’t looking to cross two strains in hopes of getting a specific trait.

Once the breeder stabilizes a certain trait, he’ll look to mass produce the offspring with precisely those traits. He may do so by feminizing seeds that the “mother plant” produces.

In the wild and without any human tampering, cannabis plants produce mostly female seeds when they “perceive” that they’re approaching the end of their lifetime.

Feminization is essentially a process of pushing the plant to produce as many female seeds as possible, by making it “think” that it’s approaching its last days.

In order to survive and spread its genetic material as much as possible, plants will mostly make female seeds, and a very small percentage of male seeds, because a small number of males plants can pollinate a colossal number of female plants.

This is why the process of pressuring the plant to produce female seeds en-masse is called feminization.

There are several ways to perform seed feminization. Each one is different, although they all boil down to the same thing — getting female seeds.

Some methods are more efficient than others, which is why they are preferred by numerous producers and growers.

Colloidal silver is a substance made from microscopic particles of silver, which are suspended in liquid. Particles of silver are less than 100nm (nanometers) in size, and completely invisible to the naked eye.

You can get bottled colloidal silver on Amazon, or you can make it yourself, which is also relatively simple.

If you’re going to use it only a few times don’t bother making it, just order a couple of bottles.

Colloidal silver works by inhibiting female flowering hormones in cannabis. The result of this is that the male hormones dominate, and thus male flowers are produced.

By doing so, you turn your healthy female plants into males. Afterwards, you use the pollen that came off that plant to pollinate the other plants.

After you pollinate the other female plants, they will produce feminized seeds. This technique is reliant and yields female seeds in huge numbers.

Cannabis is known to yield hundreds (sometimes even thousands) of seeds after being pollinated. The colloidal silver method guarantees that you consistently get feminized seeds.

Here’s how to use it:

Spray colloidal silver on the branches every three days prior to switching the lights to 12/12 and continue spraying it until you start seeing first male flowers.

The more you use it, the more pollen sacks you will get. As the plant matures it will produce pollen that should be collected and used to pollinate other female flowers.

Collect the new seeds and plant them to get the next generation of the same plant.

Feminizing with Gibberellic acid is even easier than with colloidal silver.

Gibberellic acid can also be bought in stores, and it’s mostly available in powder-form.

Gibberellic acid isn’t expensive at all, you can order it online or buy an entire box for as low as $15 bucks.

Mix the gibberellic acid with water so it reaches around 100 ppm (parts per million, the instructions on the packaging will let you know what’s what), and spray that water/acid mix on the plant once a day, for 10 consecutive days during the flowering phase, and male flowers will be produced.

After that apply the pollen from the “gibberellic acid” male flowers on other healthy female plants.

Those plants will yield feminized seeds after being pollinated.

Feminizing with the rodelization method

The rodelization method is by far the slowest, the least efficient, and the least guaranteed to work out of these 3 methods.

Rodelization entails not harvesting flowers after they’ve bloomed, but rather forcing the plant to turn male, in order to preserve itself.

After the plant has flowered, you need to leave it like that for another few weeks. The plant will then stress itself and grow a couple male flowers, in an attempt to pollinate itself once more.

If your plant succeeds, you’ll need to wait an additional few weeks to get decent seeds that are ready for sowing. Keep in mind that this method is not as reliable as the other two, and yields a smaller number of seeds.

This is “nature’s way of feminizing seeds”, although like everything else with nature, it takes a lot of time. A lot more time compared to the gibberellic acid and colloidal silver.

All these factors make rodelization the most natural, but for growers by far the worst possible feminization method.

This is the most interesting site that i ever stumbled on ! Thanks for the info.

Where to find Gibberellic acid and colloidal silver??

Can you make feminized seeds without collecting pollen?

The female flower has to have pollen in order to make seeds so, no, you'd have to have pollen, and then it'd have to be from a female turned male/hermie to ensure feminized seeds

May I ask for the source of the dosage of Gibberellic Acid? I have found lots of different information about that.

Silver Thiosulfate (STS) is commonly used to block the action of ethylene in plant cell cultures. Ethylene is a hormone that is present in the gaseous state.

STS is the most commonly used chemical mix, for creating stable feminized pollen. While it may not be the only method, it is arguably the most commonly used and is quite reliable. Female cannabis plants require ethylene production to form female flowers. Without ethylene being produced, the female cannabis plant will produce male flowers full of feminzed pollen. Silver Thiosulfate Solution(STS) suppresses ethylene production in plants. When this solution is properly applied to the bud sites of a cannabis plant, the plant will not produce ethylene. Again, without the ethylene, male flowers form.repost from: https://steemit.com/cannabis/@thecleangame/diy-no-hermie-feminized-cannabis-pollen-mixing-and-using-silver-thiosulfate-solution-sts-updated

I tried this method of colloidal silver but what I’m noticing is that the male pods were formed but I can’t seem to see any crossing or seed sacks on my plants...the pods open but no I can’t see the yellow pollins that normally drop out when it opens and also the pods seem to be having a violet colour....Please advice on what to do...Thank you

I have a female just starting to show balls and I've been told, don't stop spraying colloidal, you'll get empty balls....not sure if this is true just passing along info. gained from a pretty reliable source, just know, I'm not gonna stop once they are formed until they are about to pop

also, I purchased >30 ppm colloidal silver from GNC for 30 bucks and not much was going on... made my own CS (couple bucks and a couple silver coins!) and BANG! 5 days ... BALLS!

also, I purchased >30 ppm colloidal silver from GNC for 30 bucks and not much was going on... made my own CS (couple bucks and a couple silver coins!) and BANG! 5 days ... BALLS!

What are the skills that I need to run a website business, I want to display some useful info on my site to earn money. I am not talking about designing part, I know how to launch a website but don't know how to get advertisements from companies, marketing, managing, updating, customer service and there are many more things that we need to run a website business or any other business in which we are selling our services. Do I need to do any kind of course. Do I need to hire staff for it. Please help thanks..

This website is about growing marijuana, and has nothing to do with your question. Try searching the internet using your favorite web browser for info on "How to run a website".

Thank you, Mr Trpkovich, for a very eye opening article. A friend had someone 'feminize' her plants. She gave them the seeds a while back, and they just brought her the seedlings today, to grow outdoors. They're about a month old and she says they're all female.I'm told she accomplishes this by using plant lights 24/7, but that can't be the only thing. Have you heard of this? Is that all it takes?