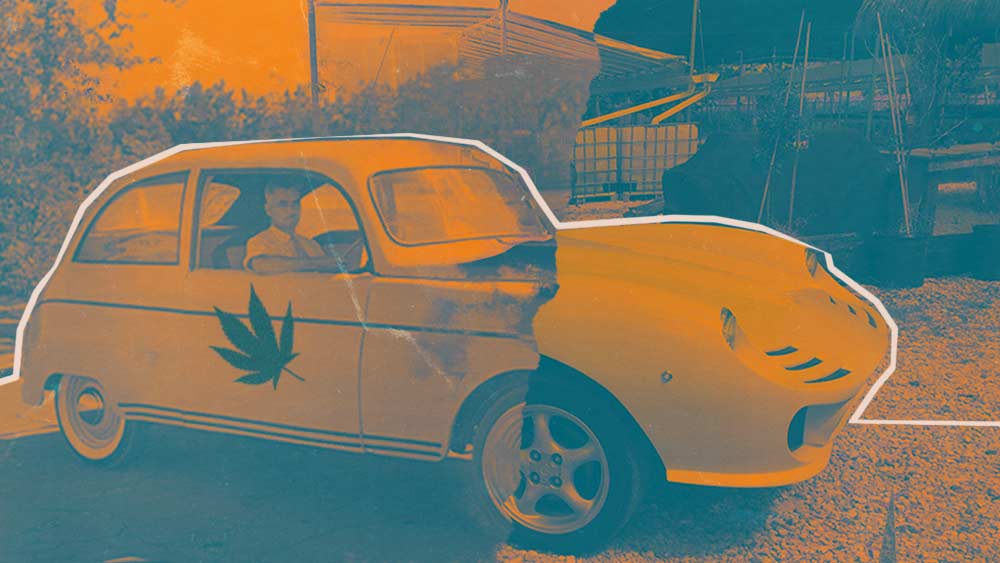 Legend has it that Henry Ford made a car out of hemp fibers back in 1941 and had huge plans for using bioplastics in the automotive industry.

According to the tale, Henry Ford was so confident about the material that he used an ax to demonstrate its strength. There’s actual video footage of the experiment, showing how multiple hard hits failed to leave a mark on the trunk lid.

The plastic was lighter than steel, yet could withstand ten times the impact.

But when World War II broke out, the project was abandoned. The prototype was later destroyed by E.T. Gregorie, the very person who had helped build it.

And then a man called Bruce Dietzen made the first production hemp car in 2017. He also used a “smacking experiment” to make a statement.

The truth is that Henry Ford sought ways to merge the automotive industry and agriculture, as he thought the bond would be mutually beneficial.

He wanted to help farmers during the Great Depression, but also believed that using bioplastics in building cars could be a more durable and safer option than steel.

So, in the early 1930s, he began experimenting.

The Hemmings’ article cites a November 1973 issue of The American Road to describe the process.

“Henry Ford would routinely drop off loads of farm products and byproducts to the lab in Greenfield Village: a bag of chicken bones, 20 truckloads of cantaloupes, watermelons, cabbages, carrots, cornstalks, onions, and more. Every load would one-by-one go into a cauldron – actually a retort, used to heat up the farm products and accelerate their decomposing process – and the trade school boys would go through the resulting mush to see what they could make of it.”

When we asked the Henry Ford Museum about these experiments, they noted that “many people are interested in them.”

“These experiments resulted in what was described as a ‘plastic car made from soybeans (or hemp)’. Although this automobile never made it into the museum’s collections, you can find answers to many of the myriad questions we receive about this unique and fascinating vehicle on our website,” was their response.

According to the article on their website, the “fascinating vehicle” that was presented in 1941 at Dearborn Days had a steel frame with 14 plastic panels attached to it.

They explain that no record of the exact ingredients used was made, but it’s possible that the panels were made from ingredients including soybeands, wheat, hemp, flax, and ramie. They add that „the man who was instrumental in creating the car, Lowell E. Overly, claims it was soybean fiber in a phenolic resin with formaldehyde used in the impregnation.”

So, the answer to the question that interests us is NO – the car was definitely not made purely out of hemp, but it was almost entirely made of bioplastics.

Oh, and the ax experiment?

It was very real, but performed on Ford’s personal car with a plastic rear deck lid made to fit it.

According to the Henry Ford’s Museum, “he liked to demonstrate the strength of the plastic, and the ax he used would fly out of his hands, about 15 ft. (a rubber boot was placed on the sharp end of the ax) into the air.”

“We are always seeking for those things which are in the clouds, not for those that lie at our feet,” Henry Ford once said.

Although historical mysteries are exciting and tempting, sometimes it’s more important to pay attention to what is happening right here and right now. Especially if that something is a first production car made almost entirely out of hemp.

In other words, we could be reaching the clouds already.

Bruce Dietzen, who built a modern version of the hemp car suggestively called the 2017 Renew says we should all follow Ford’s lead. For him, there is no doubt that the 1941 prototype was “very real”.

“It was a game-changer because he [Ford] advocated over 80 years ago the idea that everything possible needs to be made from plants. Not just cars, but all sorts of durable goods, including our homes,” he noted.

“Today, if we want to save an inhabitable planet, we must embrace this vision, and it just so happens that hemp is the most versatile plant to use,” he added, admitting that he considers it to be his personal mission.

Who knows if we’d be facing a climate disaster if Ford had mass-produced plastic cars, like Dietzen suspects he planned to?

“By 1945, when the war finally ended, Ford had suffered several strokes and was not the powerhouse he once was. I suspect that his board wasn’t willing to go through the expense to retool to make cars from plants instead of steel, and they were anxious to start selling steel-bodied cars again. Ford passed away in 1947, never seeing his greatest vision come to fruition. His 1941 prototype was destroyed along with the exact formulation of his plant-based body panels. Such a shame,” Dietzen concluded.

Dietzen’s hemp car is a modern embodiment of Ford’s vision, build on a Mazda chassis, and looks like the most expensive sports car made of steel.

Except it’s made from woven hemp.

“The upholstery and the body are made from 100% woven hemp, which is a big improvement from Ford’s 1941 prototype,” Dietzen explained.

“His [Ford’s] prototype used randomly oriented natural fibers instead of woven hemp like I do. As a result, his body panels were likely about a quarter-inch thick and were only about 7% hemp fiber. By contrast, mine are roughly 70% hemp, 30% bio-epoxy and are as thin as 1/16″, and a fraction of the weight,” he noted.

But this car has another amazing opportunity hidden in its fuel tank.

Like Ford’s 1941 prototype, it can run on regular gas, E85, or even biofuels like biobutanol and ethanol made from agricultural scraps.

Dietzen emphasized that Ford’s car was three times greener than today’s EV’s, when running on cellulosic ethanol, which he made from hemp.

“I have run my prototype on biobutanol made from corn stalks, and if that fuel was widely available, my car would also be three times greener than today’s EV’s. I’m a big fan of EV’s, mind you, but someone needed to set an example of how internal combustion cars can be greener than EV’s,” he underlined.

“Most folks are unaware that for every pound of carbon fiber produced, 31 pounds of CO2 is dumped into the atmosphere. That’s totally unsustainable,” said Dietzen.

“Today, if we were following Ford’s lead, billions of tons of CO2 being dumped into the atmosphere from the massive amounts of fossil fuels burned to make materials like cement, steel, aluminum, fiberglass, and carbon fiber would be avoided,” Dietzen was confident.

On top of that, the CO2 extracted out of the atmosphere and stored in plants via photosynthesis would be sequestered into durable goods on a worldwide basis.

“That’s why we are currently focused on making advanced third-generation hemp reinforced biocomposites, which will help any manufacturer currently using steel, aluminum, fiberglass, and carbon fiber to make greener products,” he said.

For example, companies that use carbon fiber will be able to switch to our hemp bio-composites and be 32 times greener. Those who make the switch from fiberglass will be nine times greener, while replacing steel with our material can make them four times greener, he explained.

But the interesting fact, he noted, is that there already exists a technology to produce carbon negative gasoline via plant scraps and pyrolysis, which yields biochar as a byproduct.

That biochar can be tilled into agricultural fields, thereby sequestering CO2 back into the soil.

“Using this type of fuel literally reduces CO2 out of the atmosphere. So the more you drive, the more benefit you make to the environment. A car made from hemp, running on hemp gasoline made this way would have a lifetime carbon footprint of more than negative 100 tons of CO2,” he explained.

“The problem, of course, is the petroleum industry,” he marked.

“Oil is cheap, and even cheaper due to government subsidies. Take away the subsidies and charge the petroleum companies for the damage they cause to the environment and petroleum fuels would be prohibitively expensive,” Dietzen said.

Carbon Negative fuels made from hemp and any number of plant materials would be far more cost-effective, especially if they were subsidized like petroleum is today, he added.

“So, as a human society, it’s up to us to ban all fossil fuels and instead incentivize Petroleum companies to become biofuel providers instead. I think that’s inevitable. I just hope I see it happen within my lifetime,” Dietzen concluded.

The Idea Larger Than Any Car: Axes and Fists

Let’s get back to Henry Ford.

According to legend, he believed there’s enough alcohol in one year’s yield of an acre of potatoes to drive the machinery necessary to cultivate the fields for a hundred years.

He claimed a car made from bioplastic could roll over without being crushed.

He was so certain of the bioplastic’s strength that he swang an ax at it.

And now, decades later, another man smacks his invention to spread the same point across: we can make superior materials from plants and use them to build cars, homes, and our future.

The idea is much larger than any car prototype.

“As Jack Herer once famously said in his best selling book The Emperor Wears No Clothes, ‘I don’t know if hemp is going to save the planet, but it’s the only thing that can!’“ Dietzen concluded on a hopeful note.