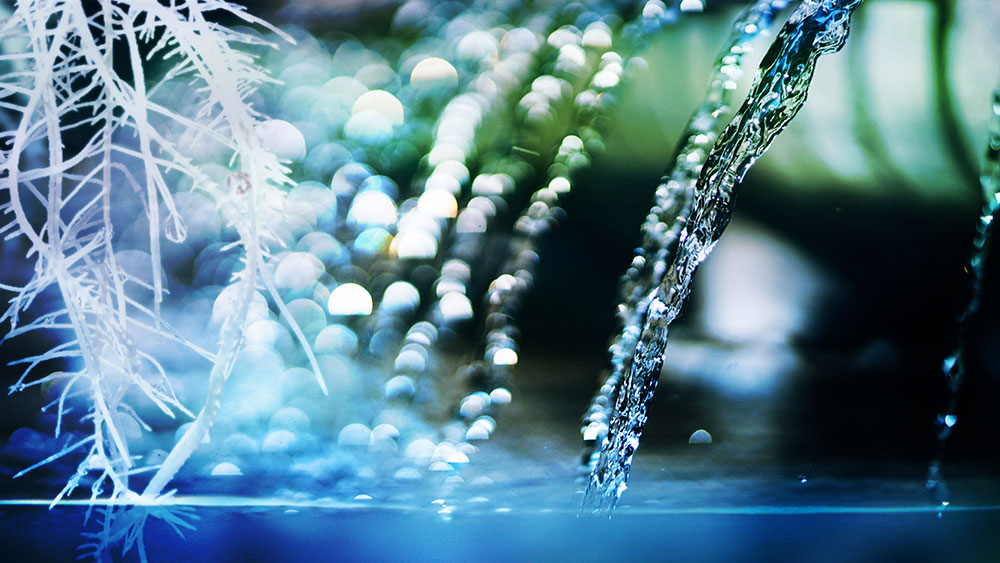 NFT hydroponic systems, otherwise known as Nutrient Film Technique, are yet another very efficient way of farming large numbers of plants in a confined area such as garages and rather small green houses.

The major difference between NFT systems and most other hydroponic systems is that this system relies on the so called top-down feeding system — but not in a traditional way.

Vertical hydroponics, often also called tower gardens, have become a major trend around the world in the last few years.

This popular growing technique has become a favorite among many growers whose crop yields tend to be in the hundreds of kilos. 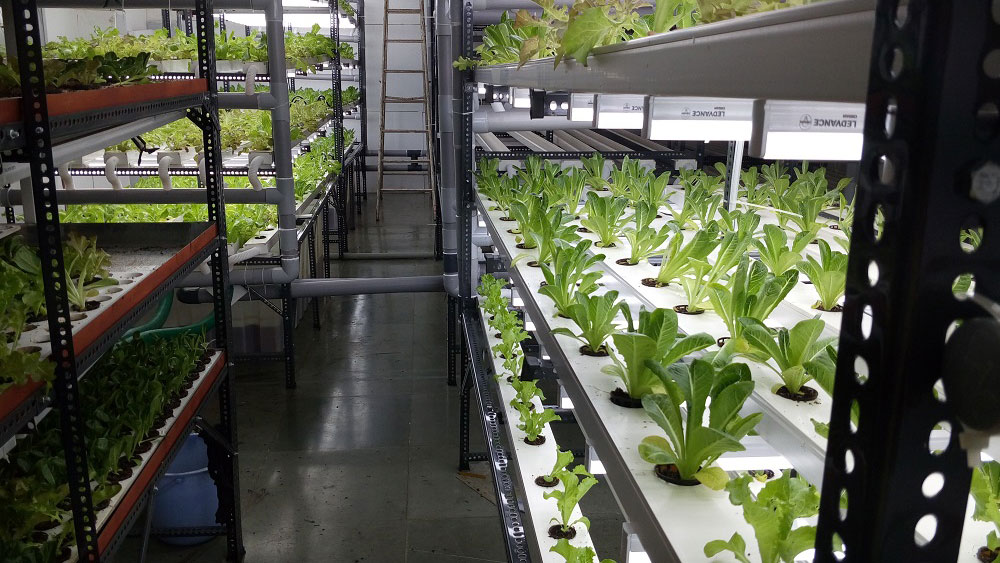 As you may have assumed, cannabis is not the only plant being grown in this way.

In fact, many other vegetables and plants are being grown in this way as it is a very cost effective and efficient way of production.

Another example that speaks for itself is that of an ex IT company owner who sold his company in order to go back to India and grow food in a vertical hydroponic garden for his fellow citizens.

What is the nutrient film technique?

This technique has been invented in the 1960s by Dr. Alan Cooper in England, which helps the growth of plants by having water re-circulate past the roots of plants in a small gully, also known as a channel.

The water level in the gully should not be deeper than 2-3 centimeters, which is why it’s referred to also as a nutrient film.

A well made NFT system is based on using the right slope of the channel, the right flow rate, and the right channel length — which means there might be a certain level of math required for assembling this system, especially the bigger NFT systems.

Even though most commercial greenhouse crops such as tomatoes, salads and cucumbers are grown hydroponically using this technique, it is well known that leafy plants such as cabbage, lettuce and cannabis all grow very well in this environment.

As mentioned before, plants are grown by having their roots touching the water which is being pumped in and flowing through the channels.

Once it reaches the end of the channel it flows back to the tank from which it was originally pumped from.

The water which is returned in the tank is then being sent back up to the channels, keeping it at a constant flow.

You determine the flow of the water, which can be changed and should be changed during different phases of growth. NFT hydroponics are a recirculatory system – which means that the water always moves through the system.

Just type your email in the box below, hit the magic button and I’ll send you a free eBook which explains everything you need to know about hydroponic growing, including detailed guides for all 6 popular growing methods.

NFT systems give us the perfect opportunity to experiment with vertical gardening. The combination of vertical gardening and nutrient film hydroponics can be very cost effective, and bring very high yields at the same time.

I like to call the combination of these 2 traditional ways of growing “Hydroponic stairs”, and I like to think that I invented it, but I probably haven’t. It’s really just my favorite way of vertical hydroponic growing, even though there are people out there arguing for other techniques as well.

As you may deduce from its name, vertical hydroponics work around having water pumped to several channels on different heights, in which you have planted cannabis clones in a traditional NFT system.

Hydroponic stairs might not be a new concept, but it’s definitely one that is not often talked about.

It is based around an elongated A-shaped construction which has several shelves.

Those shelves hold the plants in place, as well as the containers that make the channels through which the water is flowing. 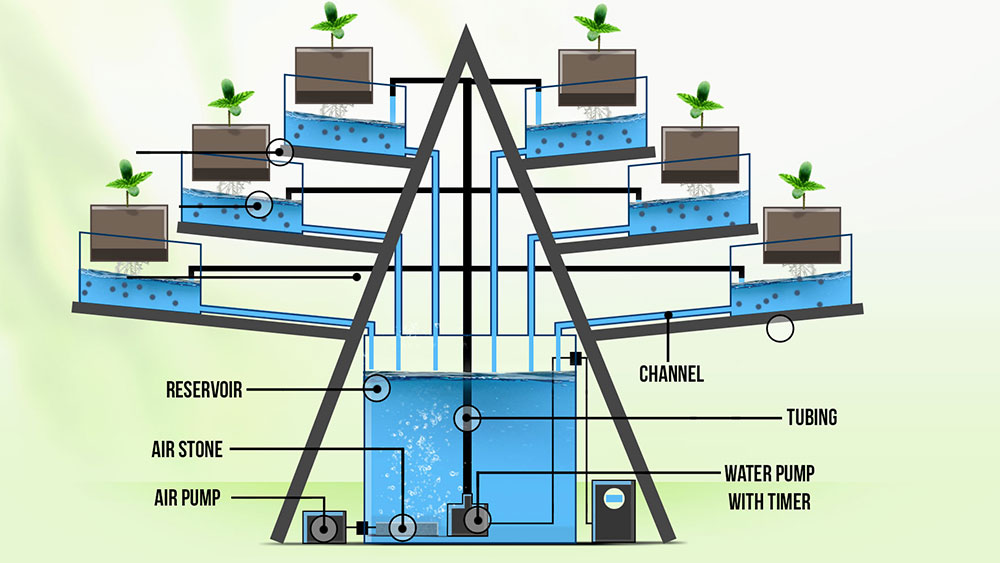 Come to think of it, you could easily divide the tools necessary for hydroponic stairs in two groups: larger and smaller parts.

The pots on the pic below will do fine, just as long as you don’t use too much water and you make sure they are plastic and not some other material. Make sure they are long enough to fit several plants in one channel.

Usually, you’ll want to give each of your plants at least 30-50 cm to the left and to the right of the plant before placing the next net pot.

Smaller parts of a hydroponic stairs setup are: 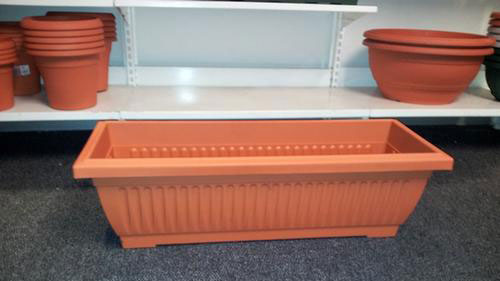 Similar, more shallow pots can serve as channels for the water film

What you will want to do is make sure that the channels are well placed on the A-shaped construction, so that they don’t fall over and interrupt the flow of water, which it will tend to do since the channels will be tilted in order.

The levels will also need to have a certain amount of space between each other so that the plants can grow in all directions without having to collide with other plants, so keep that in mind.

However, if they do collide and lean on each other, this won’t affect your yields too much.

You will basically have 6 channels on three levels, which can grow 3 plants each.

This means that if you plan on making it yourself, try to remember to give some space in between the levels for plant growth.If you are a crafty person who loves doing things with your hands, you should have no problems handling this.

Now it is time to do a little bit of math. If you want to have a large yield from a single grow, you will want to do the math as well in order to have an approximate of what you’ll get and if it’s even worth the hustle.

If you have a single set of hydroponic stairs, which has 6 channels hosting 3 plants each, your system will have 18 plants. The channels will need to be at least 150 cm long in order to host the three plants each, which means the length of the side shelves will also be around 1.5 meters.

You should be able to yield about 100 grams per plant if you have decent lighting equipment, which is one of the most important factors when growing weed indoors.

If all your 18 plants yield 100 grams per plant, you will have just over 2 kilograms of the dankest, skunkiest, stickiest buds that will get you higher than a kite.

Since your hydroponic stairs dimensions will be roughly 1 x 0.5 x 2 m (width, height, and length) you will need at least 400-watt HPS lamps, but we recommend getting 600-watt lamps for better results.

Keep in mind that this technique is best fit for high-quantity growers that employ the technique on a massive scale.

While reading this guide, you might have thought to yourself: “Damn, this sure looks complicating as hell…”, and you would be right to think so. NFT is by far the most complicated system when it comes down to hydroponics.

That being said, it is also one of the highest yielding systems that have been implemented so far. NFT has found its place in many gardens around the world, proving to be a very valuable addition to many places that suffer from having little water to spare for gardening.

NFT is notorious for being a high risk – high reward system, meaning that it has a serious potential to fail, or that something will go south before the harvest. But, once those 10-12 weeks are behind you, you might be lucky enough to have ounces on ounces. 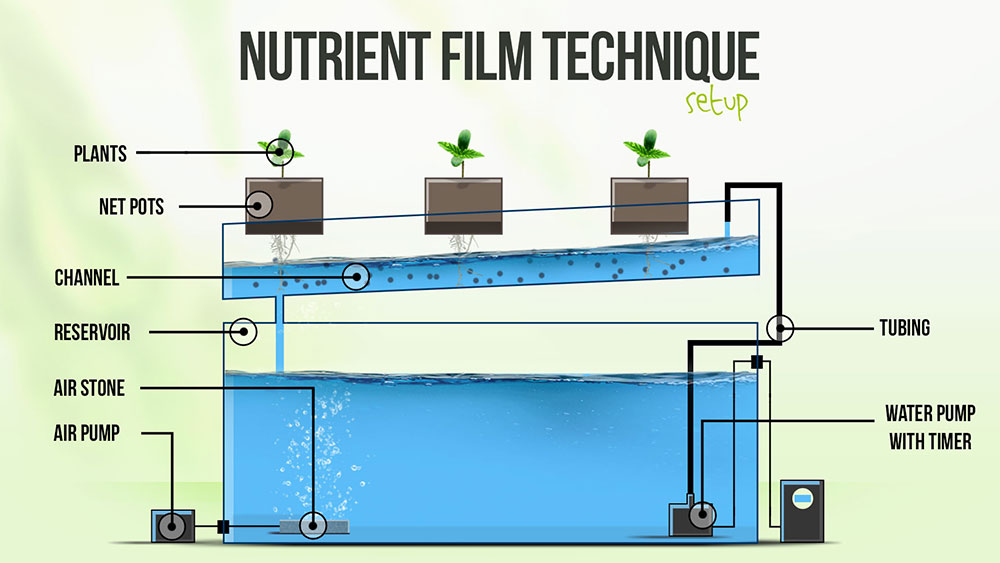 Here are some specs that you should consider when making a single channel NFT system for indoor growing:

As a general rule of thumb, flow rate for the channel should be 1 litre per minute, most of the times. During weeks 0 and 1, rates may be half this, and the upper limit of 2L/min appears to be the maximum you should run during the flowering phase.

Flow rates beyond these are often associated with nutritional problems, which is definitely something you don’t want to happen to your first NFT grow.

On rapidly growing crops such as cannabis, tests have indicated that oxygen levels remain adequate, but nitrogen levels may be depleted over the length of the channel, causing your plants down the channel to have smaller yields.

So, for a single channel NFT system you will need:

From here, it’s all a matter of assembling the pieces and putting it all together in order to look at least remotely like the one on the photo below.

You will also need to know the exact amount of nutrients you will be using. For reference,use the table below. 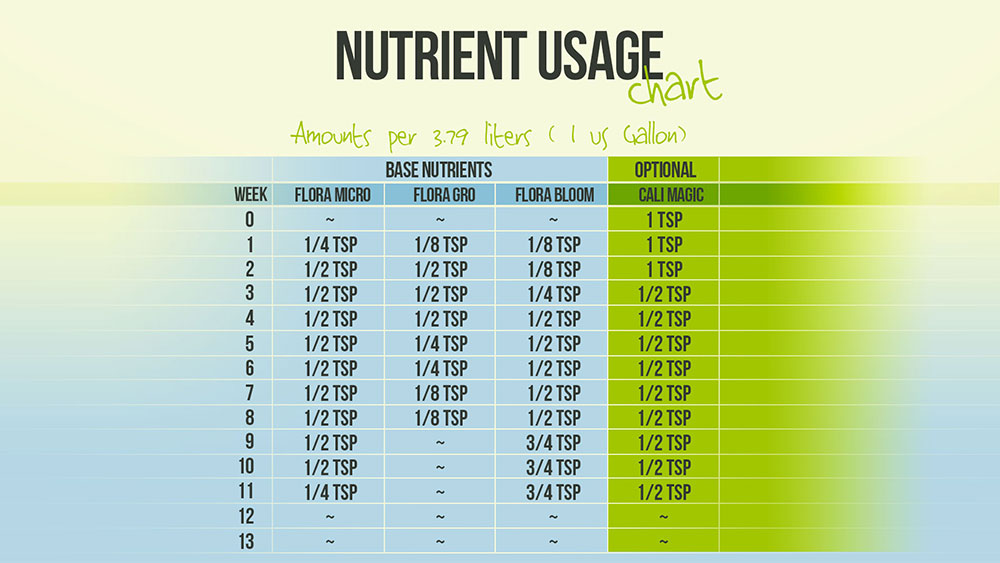 What are your thoughts on the topic of Nutrient Film Technique hydroponic growing? Have you had the chance to grow weed, or any other plant in such a system? How many times do you think you smoked Dro grown in an NFT system?

Pounce on that comment section below and let me know about your experiences.

Wondered if you had any idea's on sizing channel for vertical cannabis in a sog. My lighting calls for 3x8' tiers. I can fit 6" channel on 9" center spacing but if I want to tighten up my density, I need to go to a 4" channel. My concern is that the 4" channel will be too narrow for the root zone of this particular crop.

Hey christopher I’d like to connect with you about your vertical nft cannabis sog project. I am experimenting with the same here. Shoot me a reply with your email. Thanks

Hey! Great idea. I was wondering, can you use this NFT system with fish in the tank (aquaponics) instead of just hydroponics? What would you have to change from this hydroponics design if you were to implement it as aquaponics? Thank you!

I've been growing via hydroponics across numerous types for ove 25 years, some of your numbers are misleading and you don't have to have an air pump in NFT the splash as the nutrient returns to tank will mix and keep O2 levels good in it plus the cycle on/off when nutrient is not flowing air carrying O2 can permeate back into roots. Your amounts for measuring nutrients are comical anyone who has been in hydroponics for any amount of time will tell you measure by weight not volume and check Ec for the correct concentration for the type of plant you are growing. plus your flow rates are biased toward pot growing and at that point ( flowering ) phase you also need to adjust your nutrient mix light and Co2 levels in air for max yield on pot. So those stopping in to read, take the basic principle of all the hydroponics in areas he shows the base concept and rudimentary info, but and sit with someone that has been growing for number of years