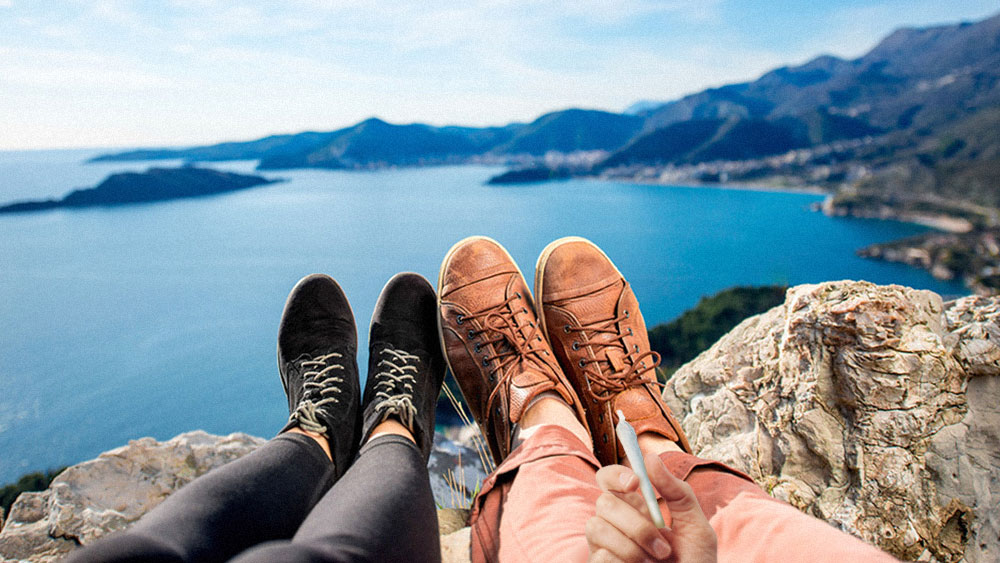 As countries around the world loosen their cannabis laws, a natural extension of a legal cannabis market is cannabis tourism.

Cannabis tourism, or cannatourism, is beginning to gain steam. While the Netherlands has made a stake in the industry due to its lax cannabis laws that go back to the 1970s, the U.S. and Canada are just beginning to capitalize on cannabis tourism as legalization takes hold.

While the laws are still being determined in Canada, experts predict cannabis tourism is going to be big business. Shaman Ferraro, CEO of cannabis tourism guide Gocanna, has estimated it may generate up to $2 billion for Canada’s tourism industry.

However, cannabis tourism is still new, albeit fertile, ground, and its feasibility, the laws around it and how it can be done safely is still being worked out.

Read on to discover how cannabis tourism has played out in markets worldwide, and the businesses and laws that have formed around it.

Amsterdam – a pioneer in cannabis tourism

What comes to your mind when you think cannabis tourism? For many, it is likely Amsterdam.

Since the 1970s, the Netherlands has had a tolerance policy towards cannabis, called gedoogbeleid. While cannabis is still not legal, it is decriminalized, meaning police turn a blind eye to its use and shops selling it.

Since the legal acceptance of the drug, the country has become known for cannabis tourism. This is especially the case for the nation’s capital, Amsterdam, where you can buy cannabis, sit back, and have a smoke in one of its 173 coffeeshops, as long as you are at least 18 years old.

The Netherlands’ acceptance of cannabis, along with prostitution, has given the country the reputation of being the Las Vegas of Europe of sorts, with the epicenter of it all being Amsterdam’s Red Light District, where most of the city’s coffeeshops are located.

The sinful allure has clearly paid off for the country, with the number of visitors rising 60 per cent in the last decade. 20 million tourists visited Amsterdam in 2017 alone, helped by low cost flights, cheap accommodation and the ease of travel between European countries.

Since Amsterdam has grown its cannabis tourism industry significantly, it is a good place to look for lessons on its benefits and pitfalls.

While cannabis tourism has clearly been a big success for the country, it does show there are dark sides to it. Amsterdam has played around with its laws over the years to curb the dangers of tourists going haywire on cannabis in the city.

Coffeeshops in the country are not allowed to buy cannabis themselves, so instead use third party buyers who source the cannabis and bring in less than 500 grams at a time to not attract authorities. It is called the “Back Door Policy.”

Coffeeshops are also only allowed to sell up to five grams at a time to an individual.

In 2012, the Netherlands introduced the “weed-pass,” which only allowed residents to buy cannabis legally from coffeeshops in the country, closing off tourists. While many Dutch cities took up this policy, especially ones around the border that complained of alleged drug trafficking, Amsterdam rejected the policy due to concern it would hamper its tourism industry, and kept its shops open to visitors.

In 2017, new legislation made it illegal for coffeeshops to be open within 250 metres of a school, resulting in the closure of 29 coffeeshops, including Mellow Yellow, the oldest coffeeshop in the world at 50 years old. Rotterdam had already enacted the same policy in 2010.

The new law was part of a compromise to prevent the “weed-pass” system from being implemented in Amsterdam, after it had already been enforced in other Dutch cities.

Other Dutch cities are taking steps to reign in the country’s loose cannabis laws. Earlier in 2018, the Hague became the first Dutch city to outlaw smoking cannabis in the city centre after complaints from residents about noise, odour and the increased strength of cannabis over the years. Those caught in the 13 designated public places where the drug is now banned will be subject to a fine.

The number of coffeeshops in Amsterdam has actually fallen over the years, from 350 in 1995 to just 173. A “no growth” policy has meant the ones that closed have not been replaced because no new licenses are being handed out.

Clearly, while cannabis tourism has been a success for the Netherlands, it shows that some restraints might be necessary for safety and the public good.

While the Netherlands has an established cannabis tourism industry, it is just beginning to sprout in the U.S. as states have legalized cannabis.

Currently, ten states have legalized cannabis in the U.S., and while the laws around its consumption are still being worked out, that hasn’t stopped savvy entrepreneurs from capitalizing on the new commodity with creative tours and businesses.

A number of cannabis tours have popped up in states such as Washington, Colorado, California and Oregon, each with their own focus and angle.

These include “wine and weed” tours in California, where party buses tour wineries and dispensaries to sample the products, or “puff and paint” tours, which highlight cannabis’ creative benefits. Tours have also paired yoga and cannabis to allow participants to zen out.

Another tour company, Kush Tourism, gives you a glimpse at how the industry is set up in Seattle with a stop at retail shops, a glass blowing demonstration, a Tier II Grow Operation and an extraction lab to take a look at concentrates, according to its website.

A number of “bud and breakfasts” have also popped up across the U.S., where you can comfortably enjoy cannabis without having to worry about offending other guests or get fined for smoking in your room. Since in the U.S. B&Bs are considered private property, they are not subject to local bans on public consumption.

The first bud and breakfast to open up was Adagio Bud and Breakfast in Denver, where there is a daily 420 happy hour and unlimited complimentary snacks all day long. There are now hundreds of bud and breakfasts across the U.S.

In Nevada, cannabis revenue in 2017 exceeded expectations by 25 per cent, and in Colorado and Washington State, legal cannabis sales jumped 63 per cent in 2016 to more than $2.4 billion, according to those states’ departments of revenue.

While a number of companies and tours have set up shop in the states, U.S. laws are still not entirely supportive of the industry.

Cannabis is still classified as a Schedule I substance by the U.S. Drug Enforcement Administration, leading to banks generally refusing to do business with cannabis tourism companies. This means businesses have to use cash to get started.

In terms of where cannabis can legally be consumed, Denver in early 2018 began to require cannabis tour operators to have to apply for a designated area consumption license in order to consume cannabis in public places.

When it comes to marketing cannabis tourism, many official tourism organizations have opted to inform, not endorse.

In Colorado, state laws prevent its tourism agency, Colorado Tourism, from advertising cannabis to people where it is still illegal. Since Colorado Tourism can’t ensure its website visitors are 21 years old or older, there is no mention of cannabis on its website.

Other tourism agencies, such as Visit Seattle, Travel Alaska and Travel Portland mention cannabis in their FAQ sections or articles that encourage safe consumption and inform about the state’s specific laws.

Canada legalized cannabis in October 2017, giving birth to a new industry that is still in its first stages.

While the laws province to province are subject to change, which creates uncertainty for how cannabis tourism will take shape, companies are still betting it will be a big industry.

Colorado’s Bud and Breakfast has already expanded up north with up to 100 cannabis-friendly listings in Canada.

Cannabis High Tours is a Canada-native company that has tours listed in Toronto, Vancouver, Calgary, Montreal and Ottawa, in which you can visit cannabis lounges, dispensaries and city tourist destinations, such as Kensington Market in Toronto – notably a great place to visit while under the influence. The tour company also appears to be exploring Canada’s vast environmental riches, offering a “Forest Bathing Experience” and a “Beach Comber Experience” out of Vancouver.

Canadian Kush Tours has gone in a fancy direction with limousine tours of Toronto’s different cultural areas, and also offers cannabis cooking classes, grow room tours and a spa day as well, according to its website. The company doesn’t provide cannabis themselves, but encourages patrons to buy at dispensaries or order online.

Canadian laws on cannabis consumption vary from province to province, some setting the stage for a friendly-tourism experience, while others are more strict.

In British Columbia and Alberta, you can consume cannabis wherever it is legal to smoke tobacco, except in cars, boats and places with children (besides the beach), allowing the combination of hikes and cannabis.

However, the famous ski town Whistler, B.C. has banned cannabis retail from its community, as well as smoking and vaping in public spaces, and Calgary, Alberta’s largest city, has banned public cannabis use except in designated areas.

Manitoba, Saskatchewan, New Brunswick, Newfoundland and Labrador, the Yukon and Prince Edward County have completely banned smoking cannabis in public, including sidewalks and patios, which will likely put a damper on their cannabis tourism for now.

Josh Lyon, VP of marketing for cannabis lifestyle brand and coffeeshop Tokyo Smoke, thinks cannabis tourism is going to be a massive industry in Canada.

“We’ve already seen it popping up in California, Washington State and Colorado,” he said. “I think there’s an appetite for it.”

Lyon pointed out Amsterdam’s coffee shop culture, and thinks it is a “potentially good indicator” of interest for a similar scene in Canada.

However, if visitors come to Canada from the U.S. and hope to bring some marijuana merchandise back home, they’d better think again.

Even if they are traveling to a state that has legalized the drug, federal U.S. law deems cannabis illegal, making it prohibited or else risk fines or up to 14 years in jail.

On the government of Canada’s website, it also says previous use of cannabis could mean you are denied entry into the U.S.

If there’s one thing that’s clear, cannabis tourism is just getting started. Amsterdam has shown that it is a viable industry with a ton of interest, and while laws are still being worked out in North America on where cannabis can be consumed and how it can be advertised, businesses are already coming up with creative ideas for how to pair the drug with different experiences. It may only be a matter of time until foreigners from around the world come to know some Canadian cities as a new Amsterdam.

Great post, the cannabis tourism market is growing so fast and will be one of the major players in the travel market. We here in the Colorado cannabis vacation market have a lot of experience with that.

thanks for the inspiration. we live in a community that has become a tourist area . you have orovided some great contacts and insight