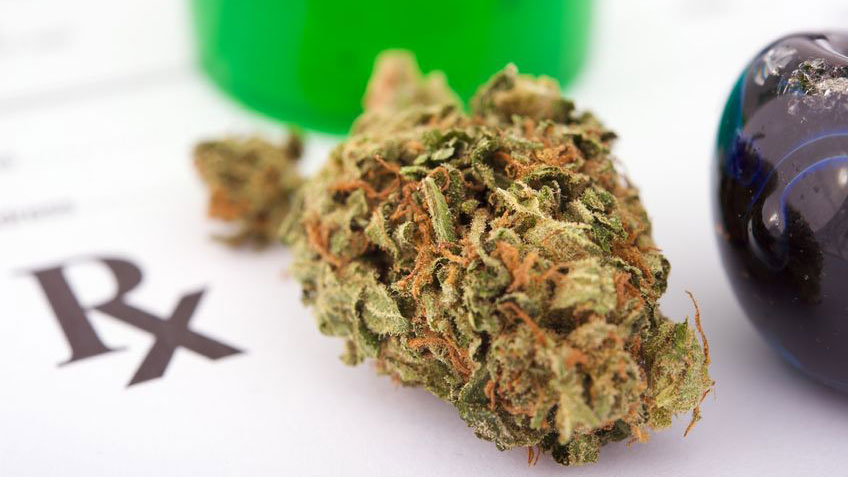 Crohn’s Disease is a debilitating autoimmune illness that can break the spirit of even the toughest individual.

Battling this condition requires time and extreme patience but numerous studies have shown that cannabis can have truly wonderful effects in Crohn’s patients.

First and foremost, I’ll explain what Crohn’s Disease is and discuss the main symptoms of the illness. Later on in the article, we’ll go into depth about how exactly cannabis works to relieve some of the difficult symptoms of this condition.

What Is Crohn’s Disease?

Crohn’s Disease is an inflammatory bowel disease, for which the cause has not yet been fully identified. The most accepted theory to date is that Crohn’s is both genetic and environmental – flaws in the in-born immune system combine with various outside factors to produce the development of the disease.

Crohn’s manifests as inflammation of the gastrointestinal tract (GI), and usually the most affected area is the ileum, which is located at the end of the small intestine and at the beginning of the colon.

While inflamed, the stomach is unable to absorb all the necessary nutrients humans require to function properly, solid foods and liquids just pass through the system. This causes serious damage and the wasting of muscles and tissues, accompanied by relentless weight loss.

The main symptoms of Crohn’s Disease

The symptoms can differ depending on what part of the GI tract is affected, but the most frequent include: 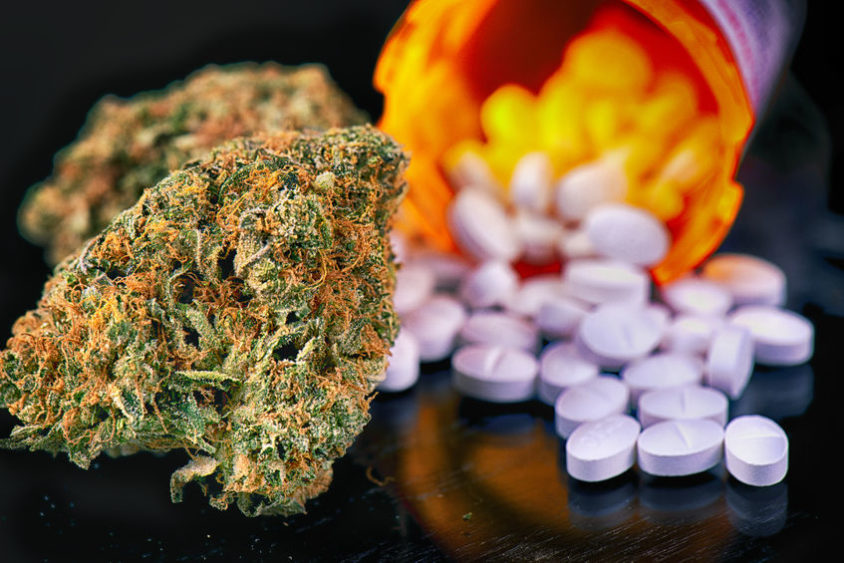 Some drugs prescribed to tackle Crohn’s prevent inflammation by restraining the immune system from constantly attacking the GI tract. This is a common medical treatment, but in the case of Crohn’s disease, it is not very effective.

By contrast, cannabinoids (active chemical compounds in cannabis), prevent the immune system from discharging inflammatory proteins and instead activate proteins that battle inflammation.

The human body possesses a great number of cannabinoid receptors throughout the GI tract, in the network called the endocannabinoid system (ECS).

The ECS is constructed out of cell receptors, their matching molecules, and the proteins that create and dissolve these molecules.

Cannabinoid receptors are particularly located on cells that are in charge of immunity, showing the importance of the endocannabinoid system for maintaining the overall immune function.

A 2017 study showed that, while under inflammation from various irritable bowel diseases, the human body produces a smaller amount of endocannabinoids than usual and that some cannabinoid receptors are unregulated, which indicates that the GI tract could benefit from cannabinoid input. (1)

Even though the direct correlation between Crohn’s Disease and the effect the endocannabinoid system has on it is still not fully understood, the studies so far indicate that therapies which include cannabinoids are effective in sending this illness into remission.

Which Cannabinoids Help with Crohn’s Disease?

Most cannabis strains have a far greater concentration of THC in comparison to CBD, and because high levels of THC also bring about euphoria as well as possible anxiety and paranoia, patients should consume strains that are also high in CBD, regardless of whether they smoke marijuana or use one of the other ways of ingesting cannabinoids, like vaping, oils or edibles.

CBD might also offer assistance by attacking bacterial infections which are relatively common in people who struggle with continual GI inflammations.

According to a study done by the Meir Medical Center and Sackler Faculty of Medicine in Israel, 45% of the tested subjects (vs. 10% in the placebo group) had “total remission” of their Crohn’s Disease after receiving 115 mg of THC per day for a total of 8 weeks. (2)

Another retrospective cohort study (3) published in 2019 looked and cannabis users and non-users who suffered from Crohn’s in a period between 2012 and 2014, and concluded that cannabis users were less likely to have four of the well-described complications of Crohn’s disease – active fistulizing disease and intra-abdominal abscess, blood product transfusion, colectomy, and parenteral nutrition requirement.

Mara Gordon is a specialist in treating serious illnesses with cannabis, with experience in treating over 600 patients. In her opinion, the optimal dosage of cannabinoids for Crohn’s Disease is 30 mg of THC and 15 mg of CBD per day, although this will be hard to achieve with most strains.

These strains all fall under the high CBD strains category and should provide a good ratio of both THC and CBD. Remember that the whole plant remedy is better than single compounds (for example, a whole-plant extract is more powerful than just pure CBD oil), as it contains a variety of terpenes, which aid the cannabinoids in breaking the blood-brain barrier.

CBD Mango Haze is one of our top picks, as it offers almost a 2:1 CBD to THC ratio, leaving you clear-headed but pain-free. You can count that it will get you medicated, uplifted, and motivated, with a significant reduction in inflammation over time. Its aroma is fruity and peppery and the high is pretty mellow.

As the name suggests, Chemo offers heavy sedation, and it’s perfect for soothing the cramps and muscle spasms that frequently plague Crohn Disease patients. This is also one of the few strains that offer a therapeutically perfect 1:1 THC vs CBD ratio.

With high levels of both CBD and THC, Harlequin is truly amazing for both pain and stress; large amounts of CBD can battle the exhilaration provided by THC. Even though this is a Sativa dominant hybrid, Harlequin OG is sure to help tackle even the gnarliest of Crohn’s symptoms.

Amazing for both inflammation and pain, Hash Plant has a powerful body effect, while also affecting the mind with gentle euphoria. Packing on the same 50/50 cannabinoid ratio, Hash Plant found its use in numerous medicinal cases, including Crohn’s disease.

Sour Tsunami, a 50/50 Indica-Sativa hybrid bred from Sour Diesel and NYC Diesel, is another great strain for abolishing spasms and cramps. This strain is also good for patients with pain and stress, as it offers minimal psychoactive effects.

There are several personal stories and opinions about whether cannabis can provide relief from the symptoms of Crohn’s Disease.

However, studies have shown that Crohn’s Disease can be positively affected, or put entirely into remission, by using precise doses of the right cannabis strain.

Whether you go down this green route is entirely up to you.

Our experience with CBD has been amazing. Since we first started using it, we have noticed an amazing health improvement in my son's life. His Crohn's has been in remission since he has started the water soluble BioCBD. He had never been in remission before. He was only controlled with his other medications, but never in remission. The other medications he has used in the past have also left damaging effects, whether they were instant or long lasting. I'd say this is truly a blessing to our family!

Thank you very much May for leaving this comment, and I'm extremely happy that your son is feeling better :) It's quite important for skeptics who still believe marijuana is just a getting-high tool to hear about real life situations like yours, where lives were changed because of the healing qualities of cannabis and CBD.

MY wife has had Crohn's for about thirty years. Her doctor "suggested" she look in to pot for relief something like 28 years ago. Back then, of course, there was no oils or pills or little gummy candies, and so I have had thirty years of sneaking around in order to get my wife her "medicine". Smoking it helps with the nausea and gives her the munchies, so she can actually get food in her belly without throwing it up. Now it seems I have some research to do regarding CBD, so thank you for this article! Remission has always seemed like a "pipe dream", if you'll pardon the pun. Now I have hope it is attainable.

Hey John, thank you for writing this. Using regular "old-school" cannabis is definitely beneficial for Chrohn's, but these new carefully bred strains of pot are much more powerful. The percentages of both THC and CBD are pretty high, and together they create the "entourage effect", where the cannabinoids play off each other to give the patient the biggest health impact. I would also suggest using a vape tool instead of edibles or pills, because you just can't go wrong with using whole-plant products. If you have any more questions, let me know :)

Good day I just bought CBD 50mg/ml 1500 mg and THC 30mg/ml 600mg from Rasta Pharaoh For my crohn's. And I have no i dea how to calculate the ratio. How many drop should I be taking?

Hey Bash, some sources suggest that the optimal dose of cannabinoids for Crohn’s Disease is 30 mg of THC, and 15 mg of CBD per day. One study from Israel suggests that only THC (115 mg per day) can also be used for battling Crohn's, but using both THC and CBD is definitely a better option. Please let me know how that works out for you.

Thank you for this post omg. I have crohns for 6 years. I have sworn by smoking marijuana since the beginning as it helped me more than any narcotic could. Most medication for treating crohns have lots of side effects and draw backs like much higher risks for cancer and many other illnesses. With marijuana I don’t have those worries. My doctor is all on board to get me approved for medical but where I live it’s just starting to come around. With this site I can take it to my doctor and other people I know struggling like I am. Life is much more livable with marijuana. I guess the saying of “I love you Mary Jane” holds true to this day but now for actual health benefits.

You're very welcomed Tabitha. The world is finally getting reacquainted with this extraordinary plant, and we're ecstatic to be a part of it :)

Thank you for your input Dan, we're very appreciative.