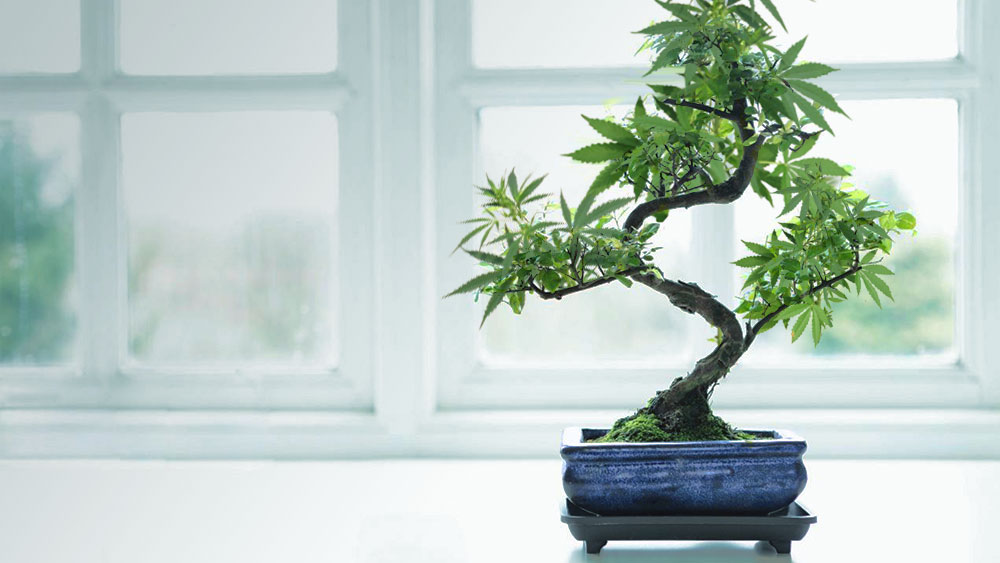 Cannabis enthusiasts recently showed quite a surge of newfound interest for cannabis bonsai trees, so I’ve decided to cover this topic in vigorous depth.

Before starting the tutorial, we should probably say something about the bonsai culture first, in order to have a better comprehension of why would someone start to grow their own marijuana bonsai tree.

Lasting for more than a millennia, the subtle art of grooming miniature-sized plants originated in ancient Japan (and this tradition is closely connected to their Zen Buddhism practices), but the roots of this custom actually originated in old China.

The end-goal of growing a bonsai tree is to create an authentic plant that appears identical to the ones that can be found in nature, with the sole difference being the actual size of the tree.

It’s important to note that bonsai’s aren’t genetically tampered to become smaller in size, and actually any kind of tree could be used for creating a bonsai.

Naturally, some species are far more suitable for this than others.

The word bonsai (when directly translated from Japanese) means “planted in a container”, and this is very true to the heart, because once the plant is grown in a small container, this will limit its ability to store large amounts of nutrients and to have a large root system, and these limitations are the most important aspects of growing a bonsai tree.

Cultivating a healthy bonsai tree involves a lot of pruning, branch-wiring, limiting the quantity of fertilizers and many other precise details, which makes bonsai cultivation a very time-consuming and demanding task, but that is (besides a gorgeous looking plant) the most rewarding thing about bonsai culture.

The same Zen-like philosophy could be applied when we are nurturing a new cannabis bonsai tree, because the sheer time and effort you put into this living thing will result in a more personal and engaging relationship with your plant, and the time spent working on it will be filled with peace and serenity.

So now that we’ve gotten acquainted with the history and the fundamental characteristics of the bonsai tradition, we can move on to the practical part of this piece.

How to grow a cannabis bonsai tree from scratch

In order to cultivate your own canna-bonsai, you’ll be needing a couple of things:

Phase One – Drilling the Pot

Start by drilling numerous holes from all sides of the pot, and through them you’ll be running the wire (or twine, depending on your personal preference) to suspend the branches of your canna-bonsai in any desired direction.

Double check that the holes you’ve drilled are wide enough for the wire or twine, so you don’t have to waste any time broadening them afterwards.

The most important aspect to get your cannabis plant looking like a bonsai tree is to stick a wooden stake next to the trunk.

You’ll use the stake to position the trunk in any direction you wish, which will give your plant that unusual exotic appearance.

To avoid any possible root damage, very gently press the wooden stake down into the soil alongside the trunk of your plant, and once you’ve wrapped the trunk the way you wanted to, tie it with wire or twine to one of the nearest holes that you’ve previously drilled in the pot.

Make sure you don’t tie the trunk with too much force, and always leave some extra room for the trunk to expand in size.

The next thing needed to be done is tying the branches of your plant.

This is achieved in the same manner as with the trunk, so when you envision in which direction you want your branches to go, tie them with wire and connect them with the holes you previously drilled in the pot.

Again, make sure you leave some extra room while wiring, so your branches can grow uninterrupted and without excessive constriction.

If you want your branches to be more horizontal, tie them down with more force, and if you want them in a more traditional vertical style, keep the bondage of that branch light.

As your canna-bonsai develops and becomes bigger, you’ll need to limit the number of branches by pruning them.

This will preserve that custom bonsai look, but at the same time it’ll preserve an optimal amount of airflow to your plant, preventing it to become too humid and develop any mold.

Just make sure you only prune the new offshoot branches, because you definitely don’t want to cut any important ones, as this will slow down the growth of your plant to a great extent.

Once your canna-bonsai reaches the flowering stage (you can determine this by viewing the trichomes on your buds), and when they turn creamy white, it’s time to snip them off.

Leave the fresh buds in a ventilated room to dry off, and once you can separate the stem easily from the branch, it’s time for curing.

To properly cure a bud you’ll need an airtight glass jar. Place the buds in the jar and place your jar (or jars) in a dark dry space.

Double check that the buds don’t get too humid, and if that happens, just air out the jars and close the lid again.

You’ll recognize the end of curing once your buds become half dry (with the trichomes remaining still quite sticky), and in this phase you can start to puff your product.

Even now when it’s completely budless, you canna-bonsai will be a living breathing work of art.

It is also possible to keep your canna-bonsai alive for the next, and all other seasons to come. Let’s show you how you can extend the life of your plant, so it flowers for many years.

When the bonsai is ready to be cut, remove the top ⅓ of the plant (this is the area where all the massive buds will be).

The middle (or central) ⅓ of the plant needs to be heavily trimmed, and all the yellow old leaves should be removed.

And for the lower ⅓ of the plant, you shouldn’t remove the small buds from this section, because they are paramount for provoking the regeneration process.

Once you’ve completed all of this, it’s time to set your canna-bonsai into vegetative state, which means 18+ hours of light plus a substantial amount of nitrogen for kick-starting the vegetating phase.

Also note that your plant won’t require so much water as it did during the flowering phase, so water it once and repeat once it’s dry.

The regeneration will do wonders for the look of your canna-bonsai, because you won’t have to start nurturing a new one every time you harvest your buds, and believe me, they will only get more beautiful with time.

Unfortunately it’s possible that there will be a decrease in the potency of your buds after every flowering, but because the end-goal of a canna-bonsai isn’t really the punch your buds can deliver, but the time and effort you put into cultivating it, and a wonderfully intricate design of your plant.