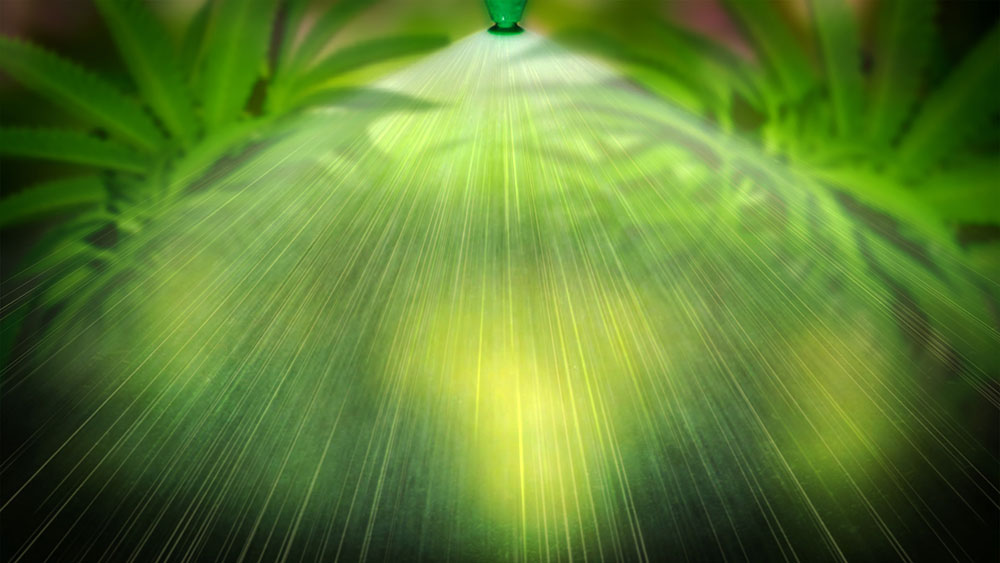 Aeroponics are different than hydroponics:

If these terms are confusing you, you should definitely check out our guide for beginners in the world of cannabis which will clear up all the questions regarding the terminology.

Aeroponic research utilizing a water vapor to utilize plant growth began in the mid-1940s. Today, aeroponics is used in agriculture around the world to grow food and medicinal plants. And of course, memes.

The basic principle behind aeroponic is that of growing plants in a semi-closed, or better yet completely closed environment and spraying the roots of plants with a nutrient rich solution. This is done to lower the chances of rot and mold appearing on the plant, as well as faster growth and more potent yields.

Even though it might not be your first choice when growing cannabis at home, aeroponics can be quite the efficient method when used properly, with the right nutrients and the right number of plants per container.

Just type your email in the box below, hit the magic button and I’ll send you a free eBook which explains everything you need to know about hydroponic growing, including detailed guides for all of the 6 most popular growing methods.

One of the major upsides of aeroponic systems is the decreased use of water when compared to other hydroponic systems. Like any other hydro system, aeroponics use around 90% less water than your regular soil-based gardens and systems.

Another great thing about aeroponics is that you can grow it in a rather small space, and still be very successful.

Since aeroponics allow you to stack plants vertically as well as horizontally — one next to another. 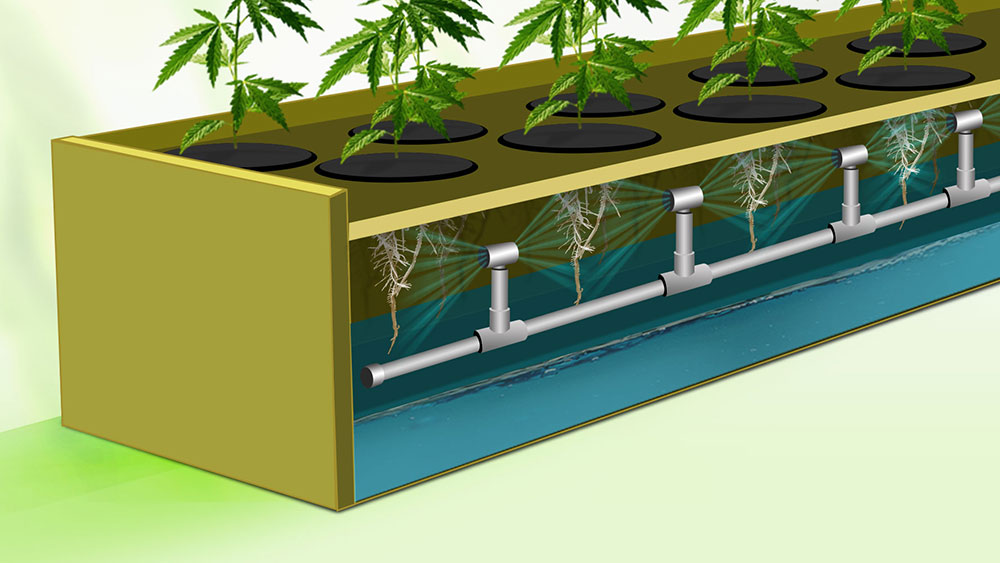 Increased oxygen uptake is what makes this system much different from other hydroponic and soil based growing systems.

Plant roots  are suspended in growth chambers and they receive unmatched levels of oxygen and are moisturized continuously. This is the biggest advantage of aeroponics over all other hydroponic systems. It is also another reason why this is the optimal system for vertical gardening.

Since other systems usually use an aggregate material (often called a growing “medium”) such as rocks, pebbles, and such.

In any aeroponic system the roots receive almost 100% of the available oxygen and carbon dioxide, which is pretty much unheard of in other hydrosystems. This means you can grow plants faster, which might be a goal for some people out there, but often proves to bring small yields.

Aeroponics accelerates biomass growth and reduces rooting times, but does not change the flowering phase, which means that only your plants will get bigger, without any significant increase in bud size.

Crop versatility is another thing to consider when thinking about aeroponics, but that’s not really any of our concern, since most people reading this article are weed growers.

The micro environment of your grow can be much more finely controlled in aeroponic systems, which makes this system even better for growing more demanding strains.

The big disadvantage of aeroponics for the regular person is that it’s not a casual way of gardening. Unlike soil based cultivation, you can’t just dump some seeds in the ground and hope for the best.

Hydroponic systems demand a little bit more attention, and more thing can go wrong when compared to soil based systems.

There are plenty DIY systems that will allow you to put aeroponics into practice at home through DIY aeroponics, but they might require some effort and dedication.

Clogging is one of the biggest problems, not just in aeroponic systems, but all hydroponic systems that rely on water flowing or being moved in any way (so this does not include deep water culture hydroponics).

Aeroponics relies on delivery of nutrient-rich water to plant roots in the form of a mist. The micro misting outlets often clog up easier and faster than traditional hydroponic setups, which use wider plumbing accessories, such as garden hoses and water outlets.

This is why hydroponic systems demand a bit more maintenance than soil based systems — to reduce a possible buildup of nutrients and other particles in the water that might bring your crop in danger.

This is most often used as a backup plan in case your crop needs to be saved and moved.

As you can see, these materials are not really that hard to get – it’s not like we are telling you to get Iranian dust or molten lava in order to grow weed.

Aside from those materials which are essential to building even the simplest aeroponic systems, here’s a list of tools you will need for assembling the said systems.

Take a look around your house, garage, or wherever you might hold the following, before rushing to the nearest Black & Decker.

Make sure you put the safety glasses on first, even though we placed them fifth on our list. Safety first people, and then getting high second, third and every other place.

Punch holes in the bucket lid

Take your hole saw and the bucket lid and punch several holes in it, depending on how many plats you plan on growing in that one bucket. You can do one plant per bucket, but that won’t bring in big yields and large amounts of weed.

When deciding to grow weed in an aeroponic system, it is often best to grow more than one plant in a bucket, so why not grow 6 or 8?

Place the net pots into the freshly drilled holes you just made on your bucket lid. You can also buy a premade lid with net pots already installed if you don’t mind spending an extra buck on that.

Pun one in each hole on the lid, and push the lid down on the bucket. Make sure the net pots fit snugly.

Setting up the pump

Hydro pumps with suction cups are the best way to make sure your pump will stay in one spot.

Run the pump plug through one of the net pot holes and plug it into the timer. Always set the timer for 30 minutes on and 30 minutes off as that will be your watering periods during which the roots will take in water and nutrients, and then subsequently dry off.

Fill with at least 2 gallons of water (about 8 liters), place your plants in the net pots and let the growing begin!

Have you grown weed in aeroponic setups before? What are your experiences and how good was the weed you grew? Let us know in the comment section below.

Aeroponics relies on delivery of nutrient-rich water to plant roots in the form of a mist. The micro misting outlets often clog up easier and faster than traditional hydroponic setups, which use wider plumbing accessories, such as garden hoses and water outlets.

but there is certainly a solution to - use of a chlorine-like liquid to decongest the nutrient ducts.

I mean sure you could do that but doing that would require disassembling the whole setup in order to flush it. Or, you could let the liquid go through the system without removing it and potentially risk harming the plants with the liquid