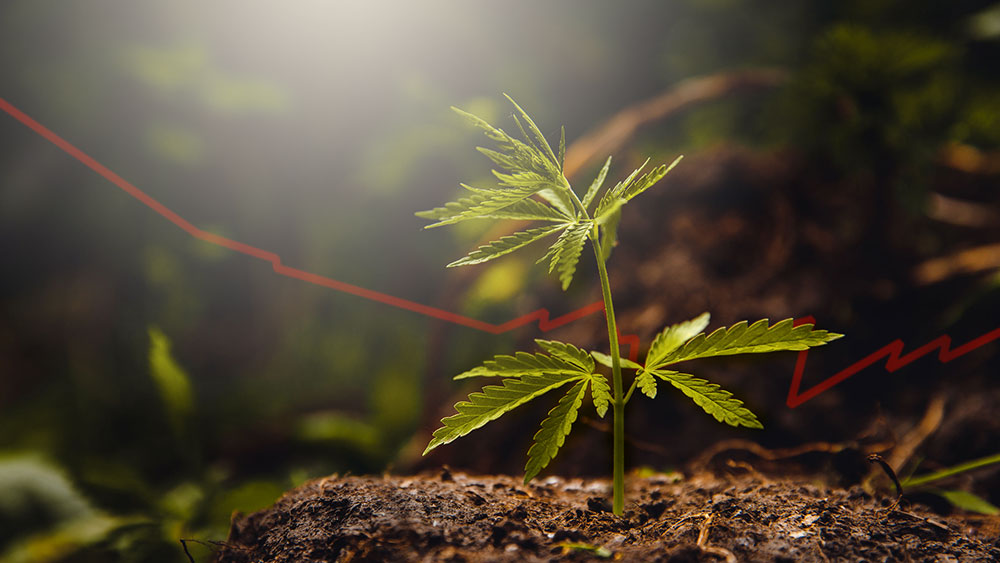 Canopy Growth may have suffered total crop failure in its Aldergrove, B.C. facility just a couple of days ago.

Before you start complaining how this is just another article “short-sellers like Andrew Left and his peers” wrote, let me tell you that it’s not.

This article is pure speculation on what is going on behind the curtain, and whether the executives at Canopy Growth are being straightforward with their shareholders. Let’s explore what allegedly happened.

Yesterday, the Internet blew up with rumors that the BC Tweed facility had a total crop failure, amounting to a total of 15 tons of lost product. This news was accompanied by pictures and videos which you can see when you scroll down below.

The founder of Oregon-based Harvest Moon Cannabis dispensaries was one of the first to publicly criticize Canopy Growth in regards to this issue. 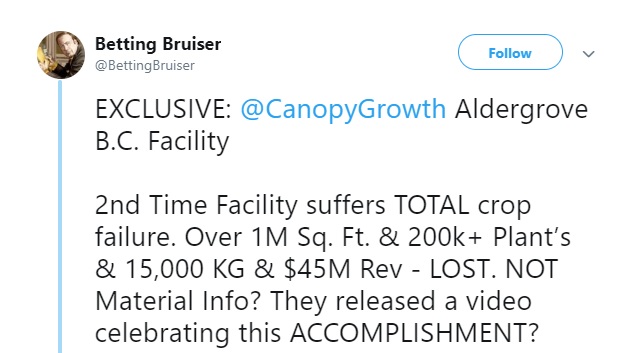 “Processing licences were delayed by infrastructure & regulatory approvals, which led to a number of plants needing to be destroyed… does not consider this event to represent a material impact on the company’s balance sheet”

Soon after, doubts about the accuracy of the original post started to arise among the Betting Bruiser’s followers.

He followed up on his initial claim that the crop failure was indeed a total failure and not just a number of plants that needed to be destroyed.

For those claiming picture is fake or I made this shit up. You all have insecurity issues with your investments. Don’t attack the messenger. Talk to @KirkTousaw @adam_greenblatt and all others that made some BS video to hype this a success $CGC $WEED #PotStocks pic.twitter.com/moemkRhvqe

Now, I am not really a weed growing master, but I did grow a few plants in my time and what I see on this video are thousands of dead plants. There wasn’t green in a mile from there.

This is exactly what happens with plants when they don’t get enough water. They start becoming brown because they need water to perform basic processes, such as converting chlorophyll.

Simply put, if someone were to throw a lit match in that room the whole facility would go up in flames in less than an hour.

Chuck Rifici, the founder of Canopy Growth, also came out in support of the shareholders on Twitter, saying that if the rumors are true it could be destructive of shareholder value.

Now, this wouldn’t be as alarming if Canopy Growth didn’t pay half a billion dollars for this facility just over a year ago.

The most alarming thing is that some people are saying that this isn’t the first time Aldergrove facility had issues with its crop.

According to some sources, Canopy Growth already had one crop failure at this facility which they successfully kept off the books, which again points back to a lack of transparency.

What happened to the crop?

There are many theories circling the internet in an attempt to explain what happened.

Canopy Growth is sticking to the press release they made yesterday, saying that it’s just a minor problem as they expected to receive the processing license, but didn’t.

Moving the crop to a different location which has a processing license wouldn’t be profitable, which is why they decided to immediately stop the grow and let the whole crop dry out at that point, instead of pursuing the flowers it could have produced.

The company confirmed they now have the required license to process future crops in the same facility.

On the other hand, people are starting to theorize why this might have happened. Here are some of the wildest, and not so wild suggestions:

In situations like these, I always like to apply the Occam’s razor—whatever explanation sounds the most plausible is what most likely happened. Another way of saying it is “the more assumptions you have to make, the more unlikely an explanation.”

This is exactly why I actually think that things happened in part because of the lack of regulatory approvals, but also that they weren’t completely upfront about the size of the loss they suffered.

I don’t think they will look into the rear-view mirror too much though, as this is just a minor setback for them in the grand scheme of things.

You completely focussed on the conspiracy theory and didn't even consider Canopy's actual statment. They took a risk by growing that crop, knowing they didn't have the regulatory approvals to harvest. When harvest time came, they still didn't have the approval from health Canada and had to destroy it. (Aka, stop watering and let die). I'm not sure why this narrative has been taken. Canopy has had a long history of honesty towards shareholders and good execution. They took a risk, it failed. Oh well.

did you even bother to read the whole article, or did you just read the title and went straight for the comment section? "In situations like these, I always like to apply the Occam’s razor—whatever explanation sounds the most plausible is most likely what happened. Another way of saying it is “the more assumptions you have to make, the more unlikely an explanation.” This is exactly why I actually think that things happened in part because of the lack of regulatory approvals, but also that they weren’t completely upfront about the size of the loss they suffered." So, before you go ahead and dispute my comment read the article again. I actually said that I believe their press release, but I also believe that there should be a bigger accent placed on this mistake because it is definitely a huge mistake in the short term.

Canopy have a history, but it is not of honesty. You are right about one thing tho, they care most about the buttering their bread, and that is their shareholders, not so much the patients/customers. $330,000,000 loss in the last quarter. What exactly IS Canopy anymore? A weed Venturecap fund really. Their product is hardly their focus. Selling stock, now thats a party.

I totally agree with you. They approached this more as a stock business rather than a weed business, which is honestly disappointing.

From the architecture those plants are not even cannabis plants. Looks more like dead tomato or pepper plants. I am sure Canopy is enjoying the fake news moment and let the fools guess.

this stock is publicly traded and i think news like this would be all over the yahoo site ad others,also notice its less than 2 weeks to legal the shots are getting cute this is bs

Nice article Alex... don't worry about these other guys. We've got; Alex Bingham, talkin smack about conspiracy theories like a Yank...yh because labour is free and so are nutrients. Same with the hydro to run the leccy...its called a failed financial risk, the kind that shareholders just LIKE YOU love...go back to your 4x4 tent pal @color grower..."architecture"? Sounds pretty horticultural to me! Or are you talking about the greenhouse? Admittedly I'm kinda high since the 17th up here above the 49th, definitely not on Canopy's junk! I take it you are from the dirty south as up here we spell it 'colour'...people all over the globe use the word phyllotaxis to talk about plants, go read up ;) Dump your Canopy stocks you two, any Canadian worth their salt knows all the LPs suck LOL...adiós!

Looked like the video was a revolving clip and not in focus. So easy to fake photography.