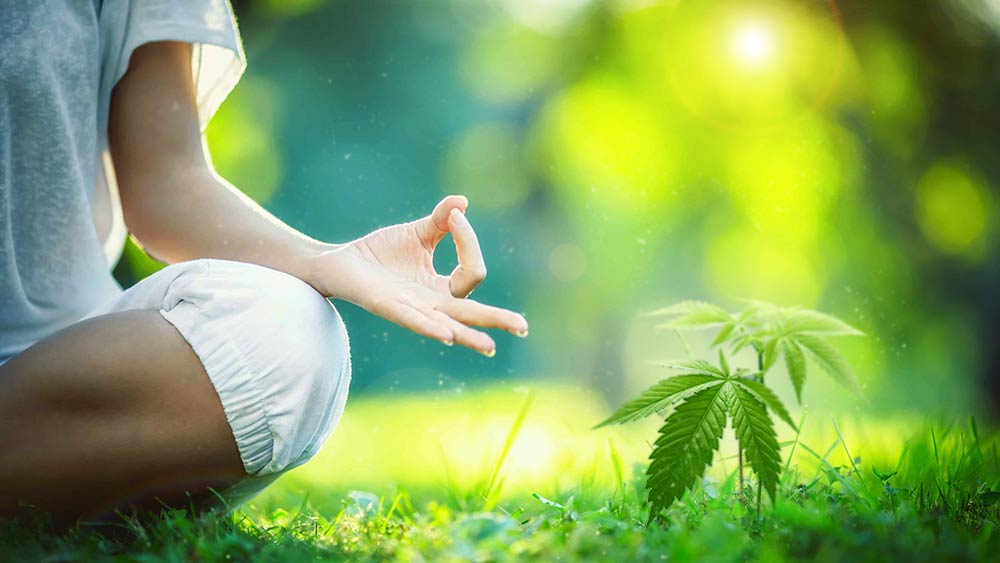 In February I toured L.A., exploring the City of Angels’ weed scene.

After a week spent dealing with the infamously wretched L.A. traffic, carrying luggage and equipment all around this unfathomably sprawling town, I was looking forward to an evening of yoga.

As a casual practitioner, I’m no stranger to a downward dog.

But when I entered Marissa Reyes’ dimly lit yoga oasis, I knew instantly that this would be different from my typical post-work yoga practice. She would be incorporating the use of weed into her yoga, through a practice pioneered by Dee Dussault called Ganja Yoga.

Like many of us, Marissa Reyes started smoking cannabis recreationally.

“As much as it would be fun and bring on the giggles, now for me it’s transformed into a spiritual practice,” she explained.

This began when Reyes began feeling resistant to starting her yoga practices.

“But I noticed when I started smoking a little bit of cannabis, I would naturally just start doing yoga and movement. I realized what a beautiful blend it was,” she said. “I thought, ‘this is pretty magical, this is something I want to share.’”

She began hosting yoga ceremonies in the living room of her Los Angeles house, located north of Hollywood. She would sit with her partner on the top of her descending backyard, made up of dirt and cement, and imagined possibilities for their space.

“I kept having this vision for a pergola that could fit 15 to 18 yoga mats.”

Eventually, that vision came to life with the Purple Lotus Pergola, accompanied by a Zen Garden and a rock fountain, all illuminated by walls streamed with dimmed lights.

We started off in a circle, everyone sharing a glass of tea and getting to know one another.

“We first create a space we can all enter sober, and do a check in with each other. Then we set an intention for the practice. Once everyone feels safe and comfortable, it leaves more space for people to dive into their creative energy, and have fun with it,” explained Reyes.

However, she is always careful to let people know that working with cannabis is “a constant flow of high peaks and valleys,” meaning that participants should feel comfortable laying down or resting at any point.

She pulled out a bottle of CBD oil and placed it in the centre, letting us know that we can put some under our tongues if we ever needed to feel more grounded and relaxed at any point throughout the evening.

So I set an intention: to create more space for me to face the feelings I’d been having over this exhausting week. Then, we all lit up our joints and passed them around the circle.

We did a group check in asking everyone to rate how they were feeling on a scale of one to ten.

“It’s about honoring wherever it is you’re at. Once we’re able to be seen for where we’re at and accepted for it, we all tune in together,” she said.

I thought for a minute, then decided to be honest with the group: Five.

I explained that, while I was happy to be there, it had been a tough week. And because I was going to be writing and filming this experience, I felt like I couldn’t fully immerse myself in the experience while staying professional at the same time.

They appreciated the honesty. We moved onto the next section: doing movements and taking yoga poses to “get the spinal fluids moving.” Because this was a Kundalini Yoga class, Reyes incorporated movement, meditation, and dynamic breathing techniques into the mix.

Our movements slowly changed as the music sped up, and we ascended into some light dancing.  “We need to get the vibrations high,” explained Reyes. This was followed by a short break.

Then began our deep breathing exercises. Combined with the increasingly prevalent effects of the weed, this put me in a state I’ve only ever reached after a half hour of practiced mindful meditation. My mind became loose and began to wander into spaces I’d been feeling a hesitance to explore.

But I was able to go to those spaces in the comfort of this atmosphere, and I faced my thoughts. It’s funny how the anticipation, the uncertainty of something is often much scarier than the thing itself. And once the thoughts had passed, I felt lighter.

Apparently, this isn’t such an uncommon experience.

“I’ve had some incredible experiences just with breathwork, where people will just break out into tears,” said Reyes. “Then they realize they finally have a space to actually feel their emotions. Once that passes through, it’ll move to laughter – and with cannabis laughter is so contagious. Before we know it, we’re breaking into laughter.”

I understood what Reyes meant when she said that Ganja yoga can shift your relationship with cannabis. When combined with intention, yoga, and a safe environment, the typical anxieties and fears I might have can receive what they really need – some space to breathe.

Take a look at the filmed version of Purple Lotus ganja yoga!