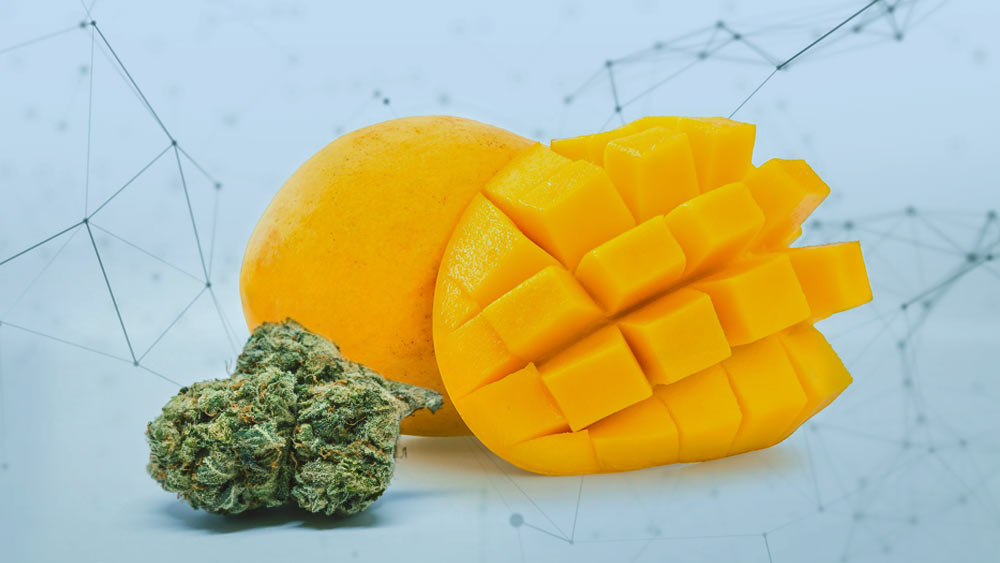 Mangos are delicious and super healthy. But, did you know that eating mangos can help you reach more intense and longer-lasting cannabis highs?

If you’re a proud proponent of the stoner culture, there’s a good chance that you know at least a few experienced weedheads who can vouch for this.

Unfortunately, scientists haven’t been very vocal thus far about this strange yet brilliant relationship between mangos and weed.

Nonetheless, some research has been done and it offers a decent insight into the fascinating ways mango’s chemical properties work side by side with cannabis’.

Mangos don’t only help intensify your weed high. Eating mangos before, or during your smoking/vaping session, can also make your munchies subside!

They are rich in vitamin A, have a low glycemic index, and are mostly made up of water (more than 80%). Plus, eating mangos covers 12% of our daily fiber intake, and that means you’ll start feeling full without consuming a ton of calories.

The point is, there are plenty of reasons why you should make mangos a regular part of your smoking routine.

Let’s find out more about this winning duo.

Though the link between mango and weed isn’t that well researched, scientists have become intrigued by terpenes in recent years, and the research they’ve done on these pungent hydrocarbons helped us better understand this incredibly synergetic relationship.

Unlike THC, terpenes aren’t psychoactive. These compounds are secreted from the cannabis plant’s hair-like trichomes and their presence is most notable when the plant is in its flowering peak.

During this time, emitting aromas are so strong that it’s possible to sense them from a distance.

Though there are thousands of terpene varieties found in the floral and animal kingdom, the one that’s most interesting to us is myrcene.

Myrcene is the most common terpene found in cannabis. Most stoners would be able to recognize strains that are packed with this particular terpene because it emits a very particular earthy aroma that we’ve come to know and love over the years.

Now, indica strains are very well known for their sedative effects. The reason for this lies in the high percentage of myrcene found in these strains.

Folk medicine has relied on the use of myrcene for a very long time as a means of creating a natural sedative and muscle relaxant.

Terpenes like myrcene are very important because they help with the absorption of cannabinoids by altering the blood-brain barrier in a way that favors the entry of cannabinoids.

But, where are mangos in this equation?

Well, coincidentally, mangos are very rich in myrcene. If you were to eat mango at least 45 minutes prior to lighting a blunt, you’d introduce a healthy amount of myrcenes into your body which would run through the barrier between the circulatory and the central nervous system.

And now, “the entourage effect” steps onto the scene. When you smoke weed after eating mango, you have a lot of THC, CBD, terpenes, and other cannabinoids running through your system.

As a general rule, these compounds are much more potent and work faster when they’re “riding on each other’s backs.”

Precisely because of this effect, a lot of stoners experience a profound and lasting high when they introduce mangos to their smoking routine.

Is it just a myth?

After hearing this semi-scientific talk, you may be thinking that we have it all figured out. We know about terpenes and how they work, we know about “the entourage effect,” we know that mangos are rich in myrcene, etc.

This whole mango-weed relationship must be true, right?

In all honesty, we don’t know.

Granted, a lot of people have experienced these effects and swear by them, but the scientific community isn’t that convinced.

The fact is, both mangos and cannabis, depending on the plant, have different terpene profiles.

Different terpene profiles mean that these hydrocarbons can both enhance or lessen the effects of other terpenes they work alongside with. Precisely because of this, you’ll hear a lot of people claiming that mangos didn’t change anything for them.

Be as it may, it’s hard to draw any conclusions without extensive research.

If you’ve built up a strong weed tolerance or you just want to introduce something new to your smoking routine, giving mangos a try is something we highly recommend.

Not only will your high very likely become more intense and longer-lasting, but you’ll avoid having the munchies which usually leads to consuming a ton of sugar-packed foods.

However, don’t forget to take your metabolism into account. If you have a slow metabolism, you’ll need to eat mangos at least one hour before your smoking/vaping session begins.

On the flip side of the coin, if you have a fast metabolism, it would be smart to consume a larger dose of mangos in order to achieve the same effect.

When you hit the grocery store to buy yourself some mangos, make sure to pick only the ripest ones. The stronger the aroma, the greater the myrcene levels in them.

Also, if you don’t plan on consuming them the same day you bought them, don’t put them in the fridge. Keeping them at room temperature will enhance the ripening process!

Overall, despite receiving scientific approval, combining mangos and weed can do you no harm. Give it a shot. You may be in for a journey of a lifetime!

Long Time smoker of weed ,I have never heard this before. When eating a mango about 60 minutes before smoking a dube (joint) it will get you higher . I gonna try this today than I get back here and let you guys know if I left the planet lol .

loooooooool my mans on a higher plane of existence now