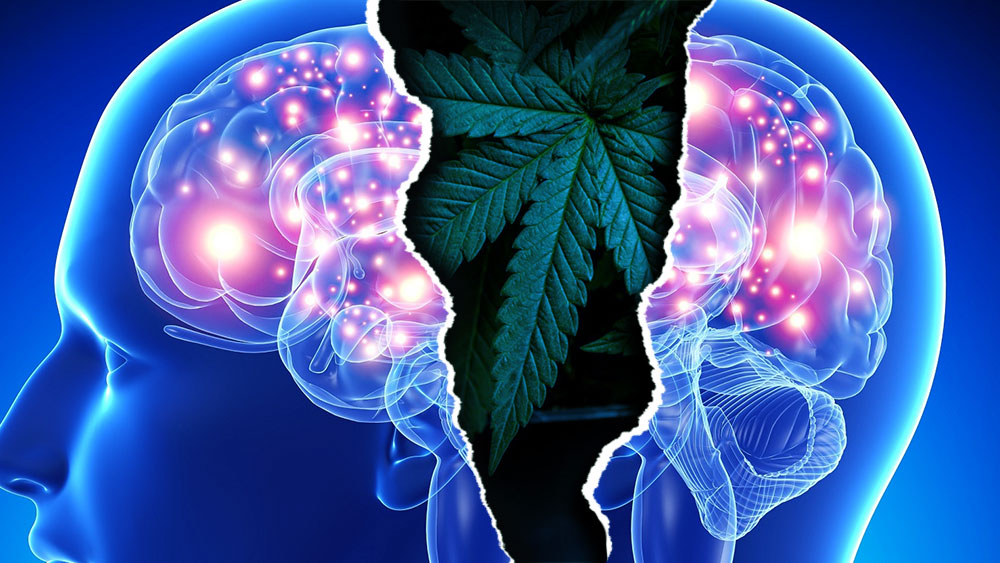 One of the biggest arguments against cannabis is that it increases the risk of psychosis and that it should be avoided by people suffering from mental disorders. Here’s why we agree with that.

Cannabis, or more precisely large quantities of THC, are known to trigger short-term anxiety and paranoia in some users, so it’s often suggested that people struggling with mental health issues should completely stay away from weed.

In this article, I’ll be investigating whether these claims are true or false, what are the scientific conclusions on this subject, and what do the cannabis professionals say about this intriguing correlation.

Schizophrenia is a mental condition which alters numerous important brain functions and subsequently the way a person feels, thinks and acts.

People with schizophrenia often struggle with other mental disorders such as depression, anxiety and substance abuse, and usually, have difficulties comprehending what is real and what isn’t.

It affects about 1% of Canadian citizens and over 7.5 million Americans.

Both environmental and genetic factors play an important role in developing this mental disorder, and these different factors are sometimes quite difficult to separate.

It’s also very hard to predict who will develop this psychiatric disorder, but people whose first-degree relative suffers from schizophrenia are far more likely to develop the same condition.

When it comes to environmental factors, a common understanding is that exposure to severe stress and trauma in childhood, malnutrition during pregnancy and substance abuse in adolescence (cannabis is partially included in this), can all have an impact on developing this condition.

There are many onset symptoms and other indications to warn us that someone has started developing schizophrenia.

Schizophrenics often have hallucinations (most notably hearing voices that don’t exist), other forms of delusions and apparitions, a generally disorganized way of thinking, and also speak in a manner that is very hard to understand.

These loosely connected sentences are known as word salads.

Withdrawal from other people, loss of motivation and poor personal hygiene are all very common in schizophrenia patients.

But, what is really going on inside of a schizophrenic brain?

Schizophrenia patients have abnormal communication patterns in between groups of cells, mainly in the glutamate and dopamine chemical areas of the brain.

Dopamine and glutamate are neurotransmitters. Dopamine binds and activates the NMDA receptors, while glutamate triggers the D2 receptors.

Research on cannabis and schizophrenia

One part of the medical community believes and fears that the most abundant active compound in most of the cannabis strains we use today, THC, is able to cause schizophrenia.

Others propose that those who have the “gene” will develop it anyway, but that cannabis just speeds up the process.

The research on marijuana and schizophrenia is still very scarce, so it’s quite difficult to be truly objective and make a definitive conclusion.

One particular paper suggests that cannabis does have the potential to cause or aggravate schizophrenia: (9)

“An involvement of the endocannabinoid system with schizophrenia is supported both by the epidemiological observation that increased cannabis use is associated with a heightened risk for schizophrenia and that acute consumption of cannabis or synthetic cannabinoids can elicit psychotic symptoms in susceptible individuals.”

Interestingly enough, schizophrenia patients have increased levels of cannabinoid receptors in their brains. (1)

This may be why cannabis consumption may produce adverse effects in schizophrenia patients.

Unfortunately, cannabis use among schizophrenia patients is in fact quite common.

One small study found that up to 42% of patients with schizophrenia also tend to abuse cannabis, which according to this study significantly worsens the progression of this disease. (2)

The endocannabinoid system is also connected with reward processing, which is closely associated with schizophrenia.

According to the 2014 research conducted by the McGill University in Canada, this process of rewarding is in deficit in schizophrenia patients, and because of this is it understood as a potential reason for heavy cannabis use in individuals with psychotic disorders. (3)

As you can see, cannabis and schizophrenia are connected on so many levels, but future research will have to connect all the dots between this condition and pot.

So is cannabis safe for schizophrenia patients?

Also, some sources propose that cannabis use can cause psychotic episodes to occur, especially when consumed in childhood and adolescence.

In that stage of growth, the human brain goes through a lot of development. Some doctors believe that exposing the developing brain to THC increases the risk of schizophrenia.

CB1 receptors of our endocannabinoid system also play a part in neuron pathways and interactions. By introducing THC into the system the risk of experiencing psychotic episodes increases almost immediately.

By activating CB1 receptors, THC also impairs glutamate production and lowers the activity of NMDA receptors. As mentioned above, low NMDA receptor activity and abnormally high D2 activity are both found in individuals struggling with schizophrenia.

This is what experts believe increases the risk for a quicker onset of schizophrenia, and that’s why they recommend staying away from the cannabis plant in the first place.

They also like to point out that people who have a predisposition of developing schizophrenia are more likely to use cannabis.

However, one small study tells a completely different story.

By taking into account their family history of mental illnesses, they divided the test subjects into 4 groups:

The researchers were surprised that there was no link between cannabis use and the chance of developing a mental condition.

They pointed out that “while cannabis may have an effect on the age of onset for schizophrenia, it is very unlikely to be the cause of illness”.(4)

The most recent and definitely the most extensive peer-reviewed report is the one published in the Nature Neuroscience in August 2018.

A team of 80 researchers and 184,000 participants around the world were involved to determine if cannabis consumption can speed up the onset of schizophrenia in a huge genome-wide association study.

Its conclusion is in line with what we’ve mentioned previously:

Their analysis showed evidence for a causal positive influence of schizophrenia risk on cannabis use. (5)

Is CBD safe for schizophrenia patients?

Cannabidiol (CBD) is the second most prevalent cannabinoid found in the cannabis plant.

CBD is a non-psychotropic compound which also reduces the psychoactive effect of THC.

In the past few years, cannabis cultivators designed numerous high CBD strains, all of which are specially made for medical use.

On the market, you can also find strains with 1:1 THC to CBD ratio, created to provide the user with the medical benefits of both cannabinoids, while bringing only slight psychoactive effects.

So the question is:

Does CBD affect schizophrenia, and is it safe for consumption?

The thing is, CBD is actually considered as a possible treatment for schizophrenia because of its antipsychotic effects (6).

And that’s not all, because schizophrenia patients frequently suffer from other symptoms that can be possibly treated with CBD.

But, as expected, the findings of CBD’s effects on schizophrenia are divided.

In one study, during the first five days, patients who didn’t respond to usual pharmaceuticals were given a placebo, and onwards they received a daily CBD dosage.

After the 36th day, CBD was again replaced by a placebo drug for the next five days. The researchers were looking closely at how patients tolerated CBD, and if there were any side effects resulting from its use.

All test subjects tolerated CBD very well and no side effects were noticed, but there were also no positive effects on the improvement of schizophrenia symptoms. (7)

In another very recent study, subjects received either CBD or placebo.

After 6 weeks of closely looking into the effectiveness and tolerance of this cannabinoid in patients with schizophrenia, the CBD group had lower levels of psychotic symptoms, compared to the placebo group. (8)

It’s good to know that CBD is well tolerated and that it doesn’t worsen the symptoms and psychotic episodes, but rather creates fewer side effects than traditional antipsychotics.

However, until further findings, cannabis in general, and most notably its psychoactive component THC should be avoided if you are diagnosed with schizophrenia.