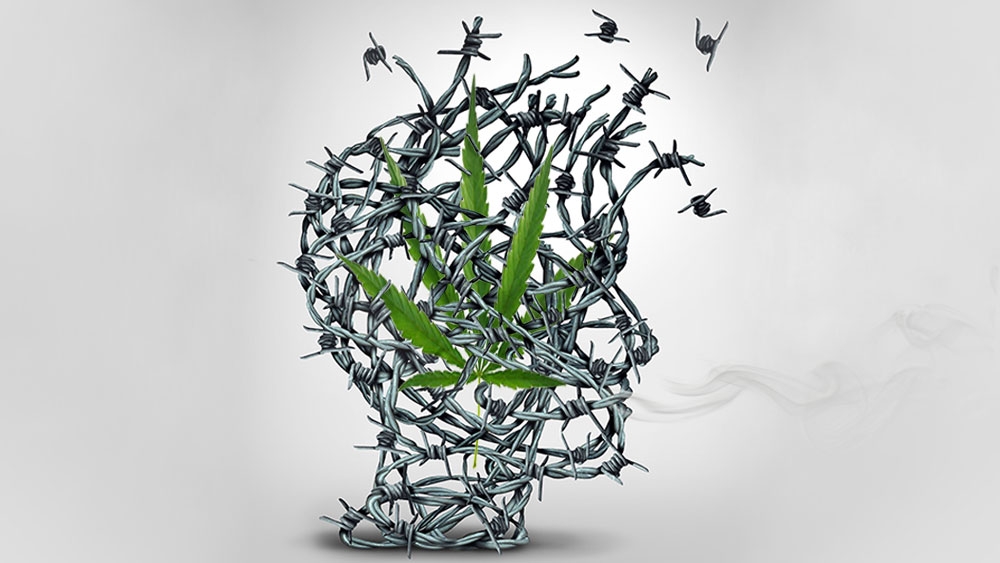 Anxiety disorders affect about 11% of Canadians and 18% of Americans.

Anxiety can accompany other mental disorders (like depression) and is usually treated with Cognitive Behavioural Therapy and prescription medications that boost the secretion of communication chemicals in the brain.

Some of these treatment options can be very effective, but not for every patient. Anxiety sufferers from first world countries also tend to explore alternative and natural treatment options, so naturally, cannabis is at the top of their list.

As a matter of fact, as much as 54% of cannabis consumers in states where cannabis is legal, claim that they use it to relieve anxiety.

But why is that so?

The answer to this lies in the chemical structure of cannabis and its active ingredients — cannabinoids.

So, where one strain can completely eliminate anxiety and most of its annoying symptoms, another may increase it and induce complete paranoia and, possibly, a full-blown panic attack.

How compounds from marijuana relieve anxiety?

The human body maintains homeostasis through a system called the endocannabinoid system (ECS).

The completely healthy human body produces just enough of these substances to keep us healthy and happy.

These activators, like anandamide, travel into the receptors (CB1, CB2) and tell them to perform a certain function, like reduce inflammation, increase the immune system response, and much more.

In layman terms, cannabinoids from the plants belonging to Cannabis sativa L. genus act as a supplement for our endocannabinoid system, helping people who have a disbalance of this kind.

Medication for treating anxiety usually boosts the secretion of serotonin (hormone of happiness) in our body.

THC and CBD are the two most common chemicals found in marijuana, but they have two opposite effects on anxiety.

Most strains contain both cannabinoids, but their levels tend to vary from strain to strain.

Cannabinoid THC is responsible for making people high, as it produces psychoactive еffесtѕ. It is also known to increase the feelings of paranoia and anxiety, which is why you should avoid it if you’re looking to relieve anxiety.

THC activates the area of the brain (amygdala) responsible for fear, especially if taken in high doses.

This might explain why cannabis can both worsen and relieve anxiety — it all depends on the dosage and the strain being used.

On the other hand, studies have shown that CBD is responsible for soothing anxiety and making people more relaxed.

CBD is not psychoactive and will not make the user high, but it will rather produce a calming effect.

Fortunately, ever since cannabis became legal for medical use in Canada and US states, its production and research also became more controlled.

CBD strains have become more popular among consumers, clinicians, and scientists because of their medical benefits. In addition to CBD rich strains, you can also use CBD oils, tinctures and other products that you do not have to necessarily smoke.

One of the first human studies in this area was conducted back in 1982, when eight volunteers were given THC, CBD, and Valium. As it turned out, CBD blocked the anxiety caused by THC. (1)

Although this research included a small number of participants, it came to some very important results, concluding that there were actually opposing effects between the two most abundant cannabinoids.

Eight years later, in 1990, a study titled “Effects of ipsapirone and cannabidiol on human experimental anxiety” explored a public speaking simulation through a group of healthy participants and social anxiety patients who were given placebo or either CBD, diazepam or ipsapirone.

Only CBD turned out to reduce anxiety in participants, making them feel more comfortable speaking in front of other people. (2)

In 2017, researchers from the University of British Columbia, Florida International University and the National Center for PTSD published one of the most comprehensive reviews on the potential anxiolytic effects of cannabis. (3)

They reviewed over 60 studies related to using cannabis for therapeutic purposes in areas of interest to mental health professionals. They concluded that:

Preliminary evidence suggests that cannabis may have a potential for the treatment of PTSD.

…the use of cannabis may be problematic among individuals with psychotic disorders.

This basically means that cannabis should be avoided by people suffering from severe mental disorders like schizophrenia and Bipolar disorder. Especially the high THC varieties.

I just have to mention another interesting review article written by the team at the New York University School of Medicine, titled “Cannabidiol as a Potential Treatment for Anxiety Disorders”.

This review rounded up studies that explored CBD as a potential treatment for a variety of psychiatric disorders, and concluded the following:

The authors of this article attributed these anxiolytic effects to CBD’s interaction with the serotonin 1A receptor, which is also targeted by other anti-anxiety meds. (4)

Studies found that CBD interacts with serotonin receptors, boosting its secretion and soothing anxiety in patients.

Finding the right medical strain depends on your tolerance and sensitivity, the frequency of use and your overall health.

It may take some time to test and find the best strain, but as a general rule of thumb, strains with higher levels of CBD should “do the trick” and strains rich in THC should be avoided.

Here are some cannabis strains that may relieve anxiety.

This strain is one of the most common medical strains and has the best overall score in reducing anxiety. It contains less than 6% of THC, and between 6 and 17% of CBD. It is used in treating different medical conditions, including anxiety. Cannatonic makes users feel relaxed and happy with almost no mind-altering effects.

This is one of the strains that have higher levels of CBD. This one has a 20:1 CBD to THC ratio, reaching almost 19% CBD and only 1% THC. ACDC is not psychoactive and will not make you high, which makes it perfect for anxiety. It will keep you relaxed, with only a little bit of cottonmouth. 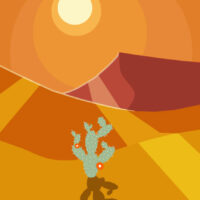 The ratio of CBD to THC in Harlequin is 5:2 (4 to 7% THC and 8 to 16% CBD). In this case, the level of CBD relaxes the user and decreases the paranoiac effects of THC, while the tiny trickles of THC reduce pain at the same time (if there is some, that is).

Strawberry Cough is a mild Sativa strain, also known to be the best strain for beating social anxiety. Why? It’s uplifting and calming at the same time, making shy people more easygoing and boosting the positive outlook on social situations.

Not sure how to dose CBD? Download Droppy – the app that calculates your perfect CBD dose.

Harle-Tsu is usually used as an ingredient in cannabis oils and it has 20 times more CBD than THC (in a 5:2 ratio). Besides its anxiety-relieving effects, it makes you focused and stress-free. This flower does not induce a psychoactive high but it rather induces calmness and pleasant feelings.

CBD Shark has 1:1 CBD to THC ratio but as it turns out it is very effective in treating anxiety because of its cannabinoid balance. CBD Shark does not produce any cognitive changes, in fact, it clears the mind and relaxes the body. Also, the THC reduces pain and makes you sleepy which can be useful in treating side symptoms of anxiety, like insomnia.

Also very rich in CBD, Sour Tsunami is well known as being the first marijuana strain to be bred specifically for its high CBD levels. CBD here makes more than 11% of the plant, while THC remains under 7%. Sour Tsunami is powerful stress, anxiety and depression reliever.

This strain is also great for anxiety and almost immediately improves the mood. Sour OG provides an energetic high with a relaxing sensation as the high fades away.

Rich in CBD (but with also an equal amount of THC), this strain may produce a slight psychoactive effect in some users. However, by using Canna-Tsu you can experience a calming effect, too, which is why it is also recommended in treating anxiety.

Critical Cure contains 8% of CBD and 5% of THC and it’s been shown to relieve anxiety just enough so that anxiety-sufferers can go through their day easier, with only a mild psychoactive high as a potential side effect.

Blue Dream is a strain that’s very helpful in treating depression and anxiety and it will help you relax from everyday worries. Blue dream actually has a bit more THC than CBD, but it is very effective in soothing emotions that go together with anxiety.

This CBD rich strain (12%) has twice more CBD than THC. Trident will help you focus, relax and take control of your stress and the situation you are in. Having this much CBD means that there are almost no psychoactive effects at all.

Ringo’s Gift was made by crossing two strains from our list — Harle Tsu and ACDC, making it very rich in CBD (with a THC to CBD ratio of 24:1). Ringo relaxes the body but it doesn’t produce that helpless stoned effect. Great for stress relief and with almost no side effects, except the well known dry eyes.

With its 1:1 THC to CBD ratio, this is a balanced, educated choice to induce a body high, but at the same time the feeling of relaxation and happiness. Sweet and Sour Widow is a recommended strain for beginners since it produces only mild cerebral effects.

Hi Helena. Nice column. As a five decade user of cannabis when a particular strain is of interest I try to go a bit deeper, and Canna-Tsu really intrigued me. Here's a bit more on this strain: Canna-Tsu (Canna Tsunami) Canna-Tsu is a hybrid cannabis strain that combines genetics from two CBD-rich parents, Cannatonic and Sour Tsunami. One of the brilliant aspects of the Canna-Tsu cannabis strain is its extensive recognition throughout the medical marijuana community. Canna-Tsu truly has much to offer to patients desiring relief or assistance. Physically, chronic pain, seizures, chronic stress, epilepsy, muscle spasms, cramps, migraines, nausea and fatigue can all benefit from this marijuana. For some physical conditions, a more sizeable dose of THC might be in order, so Canna-Tsu is made available with different THC levels which can provide the additional needed potencies of THC and CBD. Mentally, Canna-Tsu really works its magic, primarily for those who suffer from depression, epilepsy, stress, inflammation and pain. The mood becomes so uplifted and bright that those with mental disorders can begin to see the lighter and more positive side to life. Additionally, this marijuana strain helps to calm down anxiety, PTSD, bipolar and paranoia. Effects – Cerebral, Energizing, Happy, Mellow, Uplifting Medically Relieves Symptoms – Alzheimer’s, Seizures, Depression, Epilepsy, Fibromyalgia, Headaches, Inflammation, Mood Swings, Muscle Spasms, Nausea, PTSD and Anxiety. Keep up the good work. Peace and love over all.

Well written article girl, learnt alot and have some new strains to try thanks

I have anxiety and have had anxiety attacks when smoking weed. I get stuck in my mind. Blue Dream lent that experience multiple times! This would not be on my list, personally.