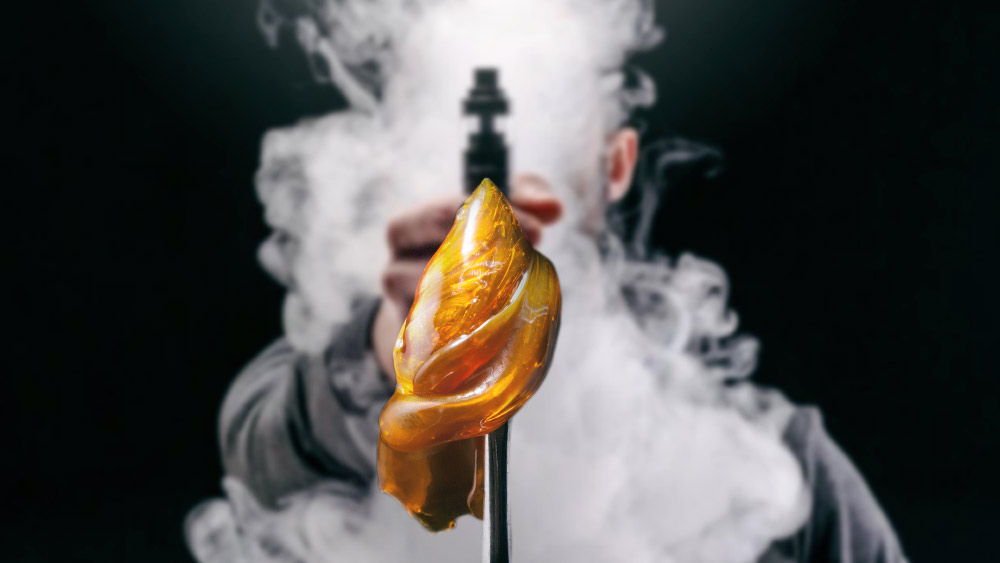 Ready to try marijuana wax? It hits hard, so make sure you’ve got what it takes.

The producers remove most plant material from the cannabis flower, leaving only active cannabinoids and terpenes. The final product is a very potent concentrate of THC, containing 60-90% of this psychoactive substance.

What Is Marijuana Wax?

Marijuana wax is one of the most commonly used cannabis concentrates. It’s been gaining popularity in recent years because of its potency and immediacy of effects. It’s similar to another popular concentrate called shatter. Sometimes the producers can’t predict the end product, because slight differences in production, including the temperature and humidity during the process, will determine the product’s consistency.

Wax is amber and usually sticky, resembling honey or more accurately, wax. Unlike shatter, which resembles glass and can easily break, cannabis wax is more supple, flexible. Its consistency can range from oily to crumbly, and depending on how it turns out, there are multiple ways to use it – but more on that later in the article.

How to Make Marijuana Wax

We mentioned the shortest version of how weed wax (and other cannabis concentrates) are made – by stripping away “unnecessary” plant material from cannabis and leaving only active cannabinoids and terpenes.

This is easier said than done. The procedure is complex and dangerous, because it involves a solvent that does the job of removing unwanted plant material, and that solvent is usually the flammable butane.

Concentrates made using butane are called butane hash oil (BHO), and cannabis wax is a subtype of the BHO concentrate.

Here is another simplified explanation of the process of making marijuana wax: the cannabis plant material (flower and trim) are placed inside a glass tube, through which you release a solvent – in most cases, liquified butane. The butane separates trichomes from the plant, after which they are heated to remove butane from the mixture.

The heat serves the purpose of letting the butane evaporate, and this “purging” process can last a long time, depending on the quantity of your BHO. If the end product becomes glassy and hard, it’s shatter. Whipping it during the purging process will help you get wax.

Don’t Make Wax On Your Own!

Though you can find detailed, step-by-step instructions on how to make cannabis wax yourself, our advice is to not even try.

Since these concentrates became popular, there have been many cases of people ending up in hospitals after trying to make butane hash oil at home. The gas is highly flammable, and after being purged from the concentrate, it falls on the floor because it’s heavier than oxygen. One spark is enough to blow the whole place up in smoke, which is what actually happened on several occasions, with at least one fatal outcome in the past few years.

These “experiments” probably won’t stop easily because cannabis consumption is still illegal in many states/countries. Instead of being able to purchase a safe cannabis concentrate product in a dispensary, where they can guarantee the product is free of all butane, many pot users can only choose between a risky DIY concentrate production or buying dabs on the street.

How to Use Marijuana Wax

Depending on the wax’s consistency, you can use it in many ways.

Cannabis wax is also called “dabs” because it’s most commonly consumed using a device called a dab rig. It’s similar to a water pipe or bong, with an additional part called a dab nail. The nail is heated with a blowtorch and then a tiny amount of the wax is placed on it to quickly evaporate. While it is evaporating, the user is inhaling it or “dabbing” via the device’s mouthpiece.

This is an easy, home-equipment method for folks who currently can’t afford any fancy vaping devices. To do this trick, you only need two butter knives, a blowtorch, and a plastic water bottle.

3) Sprinkling the wax in your joint

If the wax is not too oily but crumbly enough, you can sprinkle it in your joint or your bowl. This will give your usual dose of pot more edge, because of the highly potent wax.

Vaping wax is similar to dabbing, only the device is a little different. Instead of a dab rig, you’ll use a dab pen (also called a wax pen, vape pen, concentrate vaporizer, etc.). You place a small amount of weed wax into the dab pen’s heating chamber, set the desired temperature on the device, turn it on and inhale. Each dab pen is different, but they operate on a similar principle.

As we mentioned, cannabis wax is a very potent concentrate. While regular joints contain buds that usually have up to 20-25% THC, the potency of wax goes up to 90% (and sometimes even more).

Novice users should definitely avoid concentrates. If you are one of them and still keen on consuming wax and other delicious but potent pot products, you should at least be very cautious. What does that mean? Use it with someone who’s more experienced, or just anyone who may be able to help you if you pass out from the potent high. Do it at home. Take the smallest hit and see where it takes you.

Even if you are an experienced pot user, you can still experience negative effects from dabbing. It’s happened before, people have had serious episodes of anxiety, panic, paranoia after using THC concentrates.

Teenagers are the riskiest group to use marijuana wax. Their brains aren’t fully developed, so the high content of THC in wax can seriously affect them in the long run. Studies show that high school kids who use concentrates have higher chances of continuing to use concentrates more frequently.

And we’ve already talked about the dangers of making marijuana wax at home. Just skip it unless you 100% know what you’re doing.

Though there are some potential dangers associated with the use of weed wax, this concentrate is popular for good reason.

When bought in a dispensary, produced in a safe facility and free of all butane (and other potentially harmful chemicals), wax can deliver the best of highs – and let’s face it, that’s one of marijuana’s ultimate superpowers.

Medical marijuana users can also benefit from wax. Those who are in extreme pain can get an immediate “fix” using a minimal amount of wax. If you’ve never been in such pain, then you don’t know how valuable this is to patients.

So, yay or nay for marijuana wax?

This concentrate is what it is. We don’t want to minimize the dangers of using it, nor glorify its benefits. We can only say: Use it at your own risk, and don’t go crying to mama if it doesn’t go as planned.