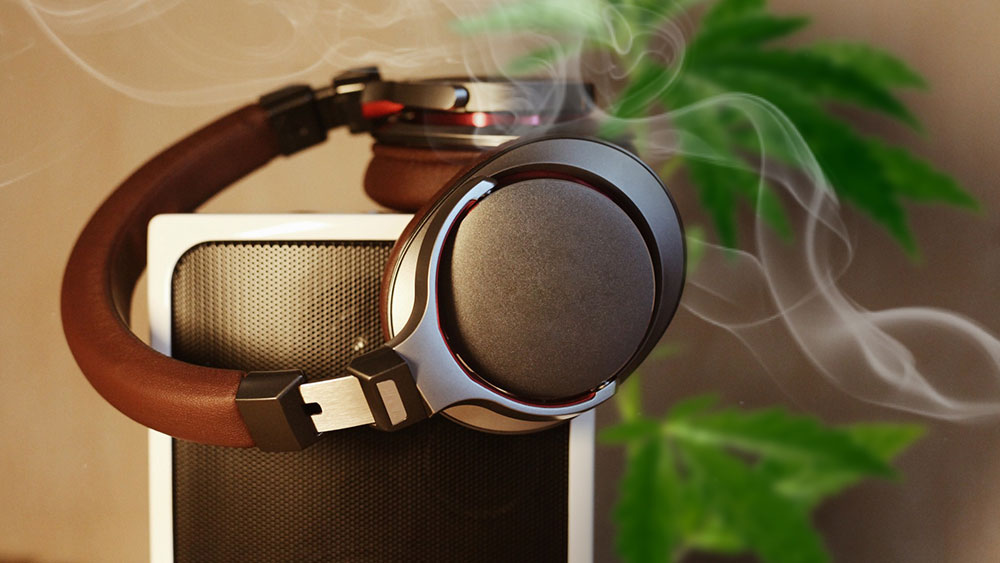 THC causes the brain to have shorter breaks between the transmissions of neurons, which in favor makes us have some highly unusual patterns, ideas and concepts appearing in our mind.

Accompanied by an added secretion of dopamine, which makes us feel delightedly nice and euphoric, THC causes us to hear every song from a different angle and in a different light than we normally would.

Now with all the nerdy stuff out of the way, we can continue to the dope section of this article, which would be the list of best songs to listen to when high.

As one of the biggest names in rock n roll history, the Zepp certainly don’t require any kind of special introduction.

I was somewhat unsure which exact song of theirs to place in this list, but Ramble On has pretty much everything that they’re famed for, both heavy riffs and gentle soothing parts, all wrapped up into one magnificent piece of listenable art.

Pink Floyd – The Great Gig In The Sky

Pink Floyd is also one of the most influential bands ever, and I’ve chosen this track because of the unmatched emotions that Clare Torry brings in the mix, even though the band has other more well known songs than this.

Just in case some newer generations are completely unfamiliar with their sound, they should check out one of their most-famous masterpieces, for instance Shine On You Crazy Diamond:

This would be a really unprofessional list if I wasn’t going to include another absolute legend, and that’s Mr Hendrix himself.

Hey Joe has an unparalleled hypnotic quality to it, while the lyrics are mighty and many would consider very relatable.

Also considered as one of the few bands on the absolute top of the holy mountain of rock, combined with the tragic departure of the biggest poet in modern musical history, Doors are definitely a superb choice for taking one toke over the line.

Bob Marley and the Wailers – Kaya

As the all-time father figure in reggae, Bob is just perfect both for smoking weed and feeling really good.

I choose Kaya because it’s a Jamaican slang term for pot, and a super chill song at the same time, but with Marley you can’t really go wrong at all.

King Crimson – The Court of the Crimson King

Dubbed as “high-priests” of the progressive rock genre, with their unusual experimentation King Crimson cleared a new pathway in music history.

This particular song is triumphantly epic, and will take you many places once you close your eyes and focus on it.

Tool is probably the most monumental and influential band formed in the 90’s that still endures (still waiting for that new album to drop though), and this song is a legendary saga which exemplifies their depth, creativity and sheer skills.

They’ve also collaborated on a few of their album covers with the famed visual artist Alex Grey, which I believe a lot of potheads would easily enjoy.

Probably the current biggest name in the genre of music most customized for stoner-requirements, Stoned Jesus are truly a trip for the earlobes.

In my own humble opinion “I’m the Mountain” is their most ambitious track to date, where all their excellence and talent are evident, plus it’s pretty funny the way the singer says “mountain” (the band is from Ukraine by the way).

Tame Impala have a very soothing musical texture, and their sound resembles the trippy phase of the Beatles, while the vocals are echo-filled and overtly mesmerizing.

This band is also very well known for the quality and originality of their visuals, so a good idea would be to watch some of their videos for the full effect while being baked.

Fever Ray – When I Grow Up

Fever Ray is a wonderful solo project of Karin Dreijer Andersson, who’s most famed as one half of the currently-defunct Swedish electronic duo The Knife.

Karins lyrics are intricately profound and nature-inspired, while the overall tones are quite gentle and soothing, perfect for a daydreaming voyage on a high note.

The majority of Crystal Castles’ songs are very aggressive and aren’t really stoner-friendly, but there is something about this light electronic song which makes me want to listen to it every time I’m high.

People tend to have a very divided opinion on CC, but I myself like them a lot, and don’t care what anyone else says.

Another fantastic electronic tune (it would suck if we included just rock tracks, right?), Luv Deluxe is a modern-day Shakespearean tragedy, just watch the video and you’ll know what I’m talking about.

Cinnamon Chasers are phenomenal for listening from the first to the last record on the album, so definitely give them a go if you end up liking L-Deluxe.

It wouldn’t be much of a cannabis-music list if I wasn’t going to include any rap songs, and first one of them has to be Yung Lean, because I absolutely adore him.

If you want to feel sad and emotional for no apparent reason, Lean’s music is a way to go, and he’s also a very big fan of smoking loud (among other things…), so yeah, that makes two good reasons why one should listen to Leany.

Wiz is the Snoop Dogg for the millennial generation, meaning he takes his weed-game pretty seriously, and also makes splendid music for getting yourself high af.

Because of his extreme popularity any kind of detailed introduction would be quite unnecessary, and I’ve chosen this song because it’s just so chill, and young Wiz has a whole stack of them laying around.

Probably the biggest poster-boy (poster-dogg would be more precise) for cannabis in this day and age, Snoop has everything you might need to keep you in a state of deep relaxation, while feeling like a G at the same exact time.

Even though his career spans for a couple of decades strong (with no signs of slowing down), I’ve chosen the old Snoop for this list, a decision I believe a lot of you would easily agree with.

Travis Scott – Drugs You Should Try

Even though the name of the song suggests a multitude of opiates one should try, this particular tune is perfect for blazing a fatty to it.

Travis (who is normally a very high-energized individual), really made his softer side apparent on this one, and the soothing tones and vocalizations are just so ethereal, it would almost be a waste if you’d listen to this song while being “low”.

As I previously mentioned, being objective in this type of article is almost impossible, and I’m definitely not claiming that I have some kind of universal understanding of music or anything like that, so I’ll be really depending on your opinion in order to make this piece as comprehensive as it can be.

Let us know what’s your favorite song for being high, and we’ll be sure to add the most frequent entries to our lineup.

What happened to the dead Should be first on any stoners list. Try Terrapin Station Remix

Abacab extended version. I would've picked Rosetta Stoned for Tool. Also don't knock it til you try it: Come With Me Now.

I adore the Strokes! I'm also very pleasantly surprised with Julian's new band The Voidz, you should definitely check them out.

Try "Little Taste of Heaven" by Leach with headphones on while high. Yooooo, it blows my mind every time. Quality song.

One of the best non-rock albums is Tidal Patterns by Kinbrae. Actually considered as ambient. Give it a listen.