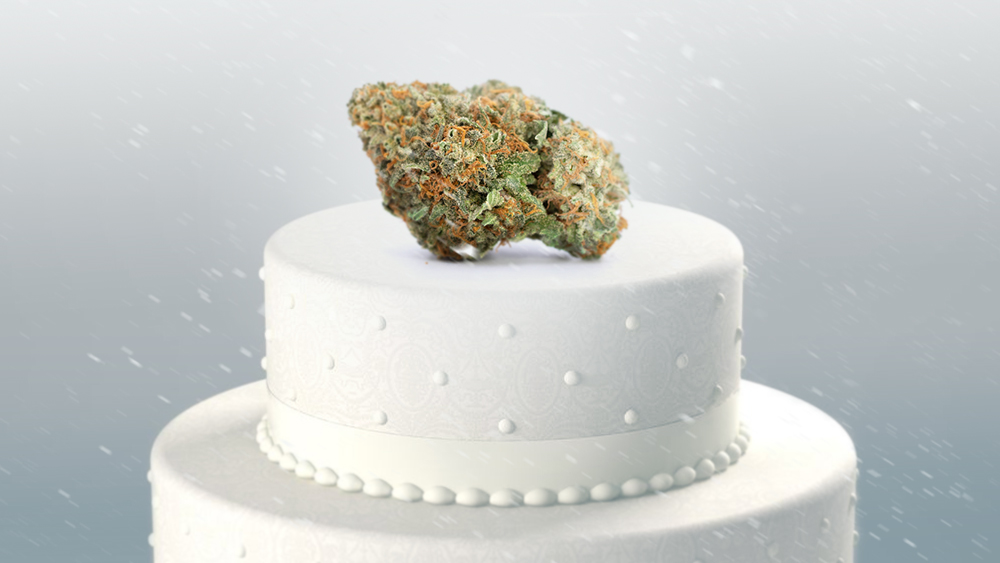 This majestic strain of cannabis is one of the most sought-after buds in 2019.

Even though it bears the name of a pivotal confection that elevates everyone’s glucose levels in holy matrimony rituals, Wedding Cake strain is actually superb.

And truth be told, some logic can be found behind this ceremonial moniker, but we’ll get to that a bit later down the line.

A lot of information about this particular strain is either contradictory or shrouded in secrecy, so it’s best to take everything you read here (and on other websites) with a grain of salt.

It is believed that Wedding Cake strain was originally bred in Los Angeles, by a group of cultivators known as the Jungle Boys who have been growing weed since 2006.

Judging by the effects it produces, Wedding Cake is a very potent Indica-dominant hybrid.

Other than that, things start to get a bit confusing.

Some sources suggest that it’s just another name for Pink Cookies, which is a cross between Girl Scout Cookies (GSC) and Cherry Pie.

This theory is pretty unlikely, in my opinion, as there are some obvious visual differences between Wedding Cake and Pink Cookies.

Last but not least, Wedding Cake is potentially a cross between Triangle Kush and Animal Mints.

These conflicting lineages suggest that whoever made this strain went through a lot of trouble to hide their tracks. It’s either that, or just a bunch of stoners who are desperately trying to figure out what’s what.

One thing is clear, the mystery aspect greatly contributed to both the clout and exclusivity of this strain.

What is the dominant strain in Wedding Cake?

Judging by the minty fragrance of an unlit Wedding Cake bud (we’ll cover the taste and aroma in the continuation), I’d dare to speculate that the dominant strain is Animal Mints, but it’s impossible to say with absolute certainty.

Another important factor to consider are the phenotypes. With any new strain of cannabis it is normal for the early batches to be fairly unstable, and these novel crops are predisposed for excess seed production.

This means that the early batches of Wedding Cake nugs most likely had seeds in them, which allowed some of the buyers to grow these plants from scratch.

Unlike the use of cuttings from mature plants (this process is at the core of cannabis cloning), the plants that sprout from seeds will express random phenotypes.

This means that every single Wedding Cake plant will express a unique set of characteristics, and the genes of one parent plant will be more dominant than the genes of the other one.

As a result of this we probably have several versions of Wedding Cake running around, and each of them is a slight genetic variation of the original strain.

Wedding Cake has a beautifully rich minty smell prior to combustion, and once it’s lit, it expresses delicate earthy notes with sugary sweet undertones.

The candy-like aftertaste is most likely how the strain got its name in the first place.

All in all, Wedding Cake has some well rounded, not-too-exotic, and generally delicious buds.

Even though its lineage is classified, Wedding Cake is undoubtedly a powerhouse of tetrahydrocannabinol.

You can expect its nugs to have at least 20% THC, and it’s not unusual for them to express even more, somewhere in the 25% category, which is a truly whopping figure.

Since it’s an Indica-dominant hybrid, it will knock most rookie users on their behind.

If you’re new to cannabis, be extra careful not to overindulge in this particular cake, or there will be hell to pay.

Wedding Cake has some gorgeous bright green buds, which are covered in crystalline THC-carrying trichomes.

Its flowers are regularly interwoven with darker brownish segments, although the volume of these dimmed parts tends to differ from bud to bud.

How to grow Wedding Cake strain?

Since neither seeds nor cuttings of this strain can be obtained at the moment, growing this plant is beyond the bounds of possibility.

The best thing you can do right now is to cough up some dough, and check for yourself if Wedding Cake really deserves all this hype and attention.