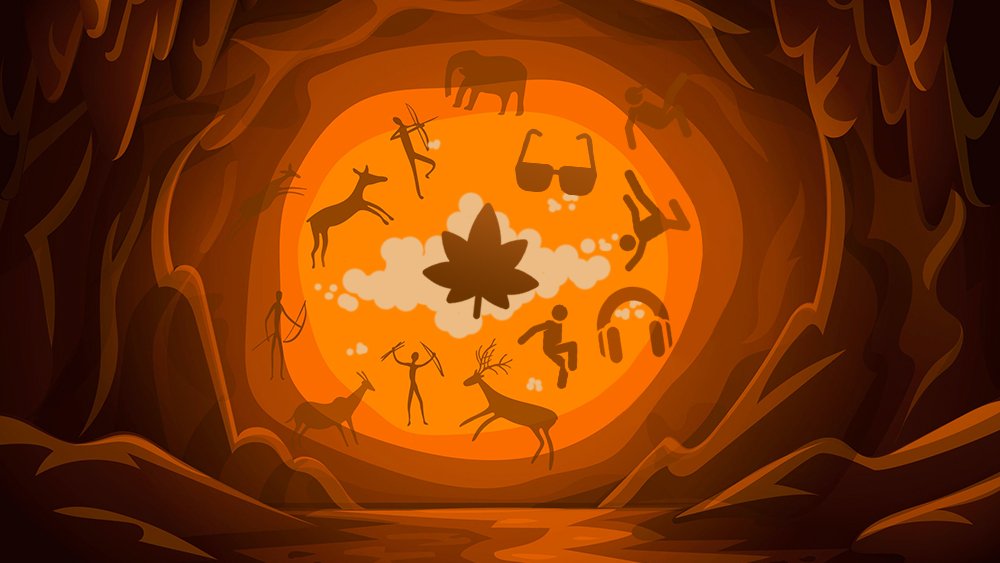 Probably as universally recognized as the Coca-Cola logo, is the marijuana leaf. It adorns everything from t-shirts, hats, and lighters to artwork and flags. It serves as a ubiquitous symbol of weed lovers around the globe.

The emerald green five to seven pointed leaf represents different things to different people – getting high and enjoying good times, rebellion against authority and counterculture, relief from pain and tranquility – even though the leaf itself is not what you actually smoke.

Just as the rich history of the plant itself, the visual story of marijuana is an exciting journey that spans time and cultures the world over.

Let’s dive into the past to discover where this weed leaf symbol appears.

The roots of pot artwork

The cannabis plant first originated in Asia and was widely used in ancient Chinese culture, where the first recorded medical use of marijuana appeared.

So it isn’t surprising that this visual history of the weed leaf begins in Asia as well, on the Japanese island of Kyushu, and offers an interesting look into one of the most popular symbols of our time.

A Neolithic cave painting from Kyushu, the third largest of Japan’s five main islands, appears to be the oldest visual representation of the pot leaf.

Dating back to 10,000 BC, the cave painting depicts a human figure standing between two stalks of what certainly looks like cannabis, along with a couple of horses and waves.

Whether or not this particular cave painting truly features marijuana is obviously debatable. But it is known that hemp has had a long history in Japan, having been cultivated since the pre-Neolithic period.

Moving along to ancient Egypt, some argue that Seshat, the goddess of wisdom and knowledge, was an early patron of pot as she is frequently depicted with a seven-leaf symbol above her head that could pass as marijuana.

And again, although the idea of a pot goddess may seem far-fetched, ancient Egyptians did use cannabis for medicinal purposes, something which is evidenced in several papyri, including the Ebers Papyrus and the Ramesseum III Papyrus.

In Europe, the earliest-known scientific drawings of the much-loved plant appeared in the 9th century.

The illustrated scientific manuscript The Vienna Dioscurides, dated around 515 AD, contains over 400 pictures of various animals and plants, including hemp, making it one of the earliest representations of marijuana in Western culture.

Another notable example of cannabis illustration is the book of hours commissioned by Anne of Brittany, the Grandes Heures of Anne of Brittany. Kept in the national library of France in Paris, the book is a masterpiece of French painting, and features drawings of both the male and female versions of cannabis sativa.

The weed leaf in high fashion

During the 1960s counterculture movement, the weed leaf symbol started appearing in consumer clothing as it was central to the hippie philosophy. The marijuana-themed fashion of the decade was embraced by many who shared the hippie worldview, one based on love and peace.

Tie-dye shirts with marijuana motifs, as well as LSD-based fashion, became the cliche aesthetic of the decade, creating a visual language of psychedelia that was later adopted by corporate advertising to sell products.

Nowadays, marijuana leaves found their way into the high-fashion industry. For example, designer duo Viktor & Rolf showcased a lime-green couture gown at their spring show in Paris this year that featured a giant cannabis leaf.

Another movement instrumental in the wide popularization of weed and its iconography is Rastafarian culture and, in particular, reggae legend and outspoken marijuana supporter, Bob Marley.

The Afrocentric religion developed in Jamaica during the 1930s regards smoking pot as a sacrament. Rastas argue that marijuana use is present in the Bible and celebrate the plant for its many benefits, especially its role in personal introspection.

An interesting visual representation of the beloved plant is found on the coat of arms and flags of regions heavily dependent on hemp.

The small Spanish town of Cañamares lies some 60 kilometers from the capital Madrid, in the province of Cuenca. The town’s coat of arms features three marijuana plants, each with five leaves – a testament of Cañamares’ long history of hemp cultivation.

In France, we see a similar situation with the coat of arms of Chennevières-lès-Louvres (in the Oise Valley) in the north, or in the central region of Servant (in Puy-de-Dôme), as well as other European towns.

More recently, the citizens of Kanepi in southeastern Estonia voted in favor of adopting the cannabis leaf symbol for its flag design.

From reggae to psychedelic rock, the history of music in the 20th century is rife with reefer advocates and stoner iconography.

One of the most influential eponymous albums in hip-hop, Cypress Hill, was released in 1991. The California band’s debut album featured a skull adorned with the weed leaf symbol on its cover in one of the prime examples of the close-knit relationship between hip-hop and marijuana.

The legendary pot enthusiasts have been associated with marijuana advocacy ever since, rapping about smoking weed in songs like Stoned Is the Way of the Walk and Something for the Blunted.

One year later, rappers Dr. Dre and Snoop Dogg popularized weed even further with Dre’s debut album The Chronic, which contains abundant references to smoking pot. No less important is the fact that the duo is also credited with popularizing pot leaf hats.

In short, hip-hop played a pivotal role in shifting the public’s view of marijuana, probably more so than any other music genre. However, the emerald-green marijuana leaf logo transcends music as well as stoner culture as a whole as weed becomes a multi billion dollar business.

Next chapter for the weed leaf

As more states embrace the legalization of cannabis, whether medicinal or recreational, the iconic marijuana leaf is appearing on corporate logos across the US and Canada, opening a new chapter in the visual identity of the much-loved plant.