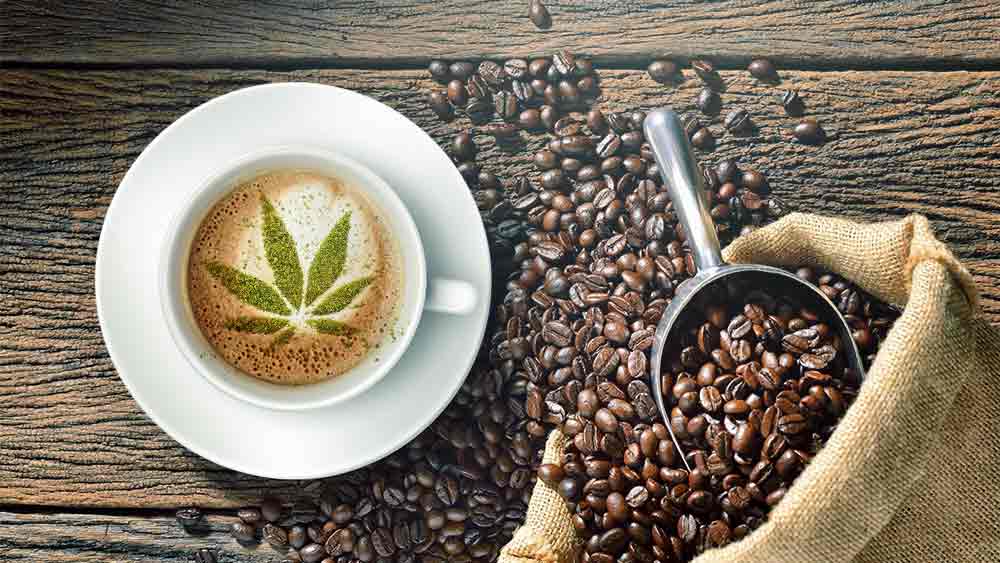 People adore coffee, and most of us are pretty dependant on it.

Coffee is one of the world’s most traded commodities, the most widely used legal psychoactive substance, and its impact on the modern way of life is simply undeniable.

A fresh cup of Joe is a source of flavor and enjoyment, but the core reason why people indulge in coffee is because of the invigorating effects it produces.

The main active ingredient in coffee (found also in the majority of teas and soft drinks) is caffeine, a powerful compound responsible for the energizing sensations we experience.

While caffeine is a strictly stimulating substance, cannabis is considered as both a stimulant and a depressant.

This basically means that weed is able to produce both energizing and sedative effects. The precise effects of cannabis depend on a number of factors, including type of weed, the quantity taken, overall familiarity with cannabis, social settings and so forth.

Even though the complex interactions between caffeine and weed aren’t completely understood by science, there’s still a lot of stuff we know so far.

In order to properly cover their relationship, we should first touch upon caffeine and what happens in the body when we take it.

What does caffeine do?

Caffeine has several distinct pathways through which it affects the brain.

It stimulates the production of adrenaline, which gets our blood pumping, increases heart rate, and opens up the airways.

Caffeine also increases dopamine levels in the brain (more precisely it slows down the reabsorption of dopamine), making you feel dandy.

But the most important effect of caffeine is its relationship with adenosine.

Adenosine is a body-made chemical compound, which helps to regulate the so-called sleep-wake cycles.

Sleep-wake cycles are intricate biological mechanisms that play a capital role in falling asleep and waking up.

Every time we’re awake the amounts of adenosine gradually increase in the brain, which makes a person feel tired.

When adenosine molecules binds to receptors in the brain (A1 receptors), they slow down brain activity. This means the longer you’re awake, the more fatigued you will become.

This also happens the other way around. While we are sleeping, adenosine levels gradually decrease, and low adenosine levels result in an overall wakefulness which is required for the upcoming day.

Adenosine and caffeine are structurally similar – and this means that they fit on the same cell receptors (A1 receptors). This allows these molecules to influence specific cells in our brain.

Adenosine is receptor activator (also known as an agonist), while caffeine blocks the receptor (an antagonist).

Besides caffeine and adenosine, dopamine also attaches to the same A1 receptor site, but on a different part of the receptor.

What’s fascinating is that when an adenosine molecule is attached to the cell, dopamine cannot dock. This effect explains why we’re in a bad mood when we’re sleepy.

But, when caffeine attaches to the A1 receptor:

Caffeine energizes us by preventing adenosine from docking, and makes us feel amazing by allowing dopamine to dock.

What happens when you mix caffeine and weed?

The most important effect (at least discovered so far) of mixing caffeine and cannabis is that this combination negatively impacts short-term memory (forgetting what you were talking about, where you left your keys and so forth).

Cannabis is known to impair short-term memory by itself, but this trait seems to be magnified when caffeine is included.

The impairment occurs in the hippocampus, which is an important region of the brain responsible for numerous memory-related operations.

In the hippocampus, a vast number of neurons with both cannabinoid CB1 receptors and adenosine/caffeine A1 receptors are present.

But, when A1 receptors are blocked by caffeine (which prevents adenosine molecules to dock to A1 receptors), the efficacy of cannabinoids is severely increased, resulting in an increase of short-term memory impairment.

This pretty much means that if a person tends to be forgetful when they’re high, they will be even more forgetful if they combine caffeine and cannabis.

This correlation also implies that a nighttime use of cannabis will produce a lesser short-term memory impairment compared to daytime use, simply because there is more adenosine in the brain.

THC also increases dopamine levels (2), which definitely plays a role in why people love using weed so much.

As we mentioned earlier, adenosine prevents dopamine from docking to the A1 receptors, while caffeine allows dopamine to dock.

This essentially means that if someone is drinking coffee and smoking weed at the same time:

This combination of increased dopamine and diminished adenosine is why caffeine and weed makes us feel energized and majestic at the same time.

A 2014 research (3) was observing the effects of pure THC on squirrel monkeys, combined  with a substance called MSX-3, which mimics the effects of caffeine.

The monkeys were already dependant on THC, and the researchers were looking to determine if different quantities of MSX-3 would influence the animals to consume more (or less) THC.

These results are suggesting that low caffeine doses possibly enhance the intoxication caused by THC, resulting in a diminished desire to consume more weed.

Contrarily, a lot of caffeine could influence your high in a reversed way, causing you to consume greater amounts of cannabis.

Of course, since this research was performed on cute li’l animals, it’s highly debatable whether these results would translate to human physiology.

Another study (4) from 2012 corroborated that combining caffeine and THC results in an additional impairment of memory in rats.

The data showed a combination of caffeine and a low dose of THC impairs memory in a greater extent than using a high dose of THC by itself.

Really bad anxiety when I combine weed and caffeine

Large quantities of weed can cause intense anxiety and paranoia even in the most experienced of stoners, and this effect can only worsen if a ton of caffeine is consumed at the same time.

The above mentioned 2014 study suggested that ingesting large quantities of caffeine can influence a user to consume more cannabis, which in return can result in severe anxiety.

THC-induced anxiety isn’t dangerous even though it’s undeniably frightening, and if you’re looking for ways to quickly diminish the overwhelming psychoactivity, you should check out our article on the top 8 methods for coming down from a nasty high.