Canada passed a bill to help make it quicker to issue pardons for those convicted of petty cannabis possessions.

Bill C-93 passed its third reading in the Senate on Wednesday evening without any amendments, and will now move to royal assent, the last step to becoming a law in Canada.

Those convicted for possessing less than 30 grams of cannabis before Canada legalized cannabis on October 17, 2018, and have no other criminal record will be eligible to apply for the expedited pardon.

While it cost $631 to apply for the pardon before, officially called a record suspension, and could take from five to 10 years for it to be processed, the new law will remove the cost and expedite the process.

Cannabis conviction pardons are an issue gaining more attention now that a number of U.S. states and Canada have legalized recreational cannabis.

According to Statistics Canada, out of 54,940 cases of cannabis-related offences, 76 percent were for simple possession in 2016.

The convictions have also been linked to racial bias.

A 2017 Toronto Star investigation found that over a 10 year period, 25 percent of arrests for possession of up to 30 grams were of black people, despite Toronto’s black population only being 8.4 percent at the time. 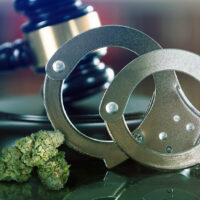 The Star also found that black people with no criminal record were three times more likely to be arrested for cannabis possession than white people with similar backgrounds.

“It is the responsibility of this chamber to look out for those who are not being treated fairly under the law and to constantly strive to make our laws more just,” Senator Colin Deacon said during the hearing. “Colleagues, the bill before us offers one small step toward helping us right some of these wrongs.”

The bill received two previous amendments, one of which allowed applicants to not have to provide any documentation to prove possession is their only crime on record, unless police records indicate otherwise.

The other reversed a change made by the public safety committee that made it possible for applicants to submit a statement swearing cannabis possession was their only conviction if their records could not be found.

Other places have also taken steps to expunge cannabis convictions as well.