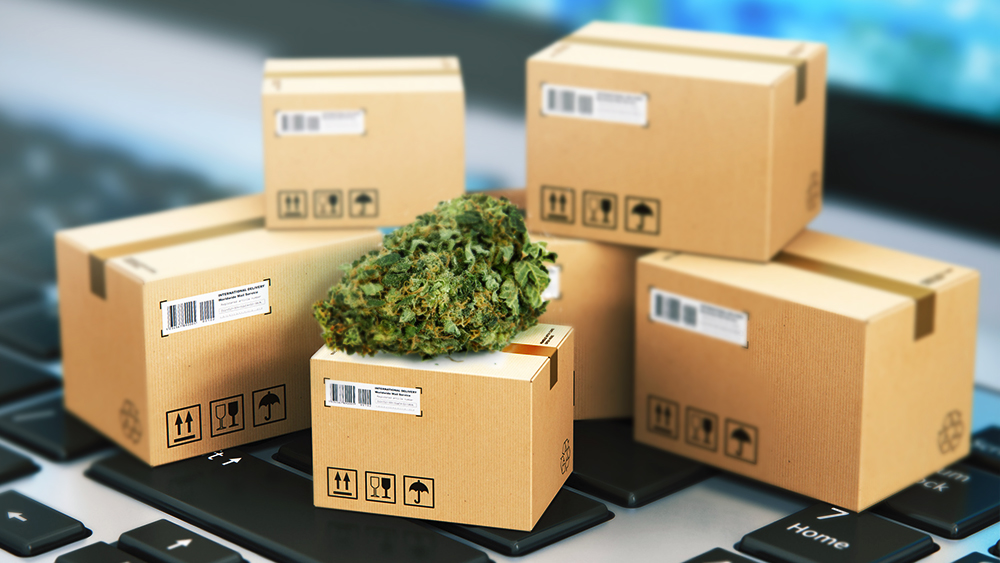 Have you ever ordered a gram of legal cannabis online in Canada only to have it arrive in a huge box that holds only a small plastic container?

Are you weary of a sea of plain packaging that features a stop sign-like red hexagon that signals the inclusion of THC (tetrahydrocannabinol), the psychoactive component of cannabis?

After more than six months of legalized cannabis in Canada, the way in which legal cannabis is packaged is definitely a far cry from the dime bag packaging of illegal cannabis.

While the government is making safety their number one priority, there has been some not-too positive feedback about cannabis packaging, saying it is excessive and expressing concerns over its environmental impact.

So is Canada’s cannabis packaging excessive? Let’s take a look.

Ordering a gram of cannabis myself from the Ontario Cannabis Store (OCS), I was surprised when the package arrived in a large box that contained a bulky plastic jar for the small amount of cannabis that was inside.

It turns out I’m not the only one who has shown concern over the excessive packaging, with other consumers taking to Twitter and Reddit to voice their opinions.

Users have called the packaging “excessive” and “overkill.” One customer weighed the packaging and found it was nearly 40 times heavier than the cannabis she bought — 38 grams to one gram.

“Once you open it, it’s just such overkill,” Candace MacDonald told the Growth Op. “There’s one itty-bitty bud in it, and I could probably pack half an ounce in there.”

The Cannabis Act, which legalized cannabis in Canada, included many packaging requirements that aim to create as safe a legal environment as possible.

Requirements include labels that must feature a yellow health warning and a red THC symbol, and packaging that must keep the cannabis dry, be in a plain uniform solid colour, be either opaque or translucent, and tamper-evident.

“We have arguably more regulations than more controlled substances,” Canopy Growth’s Community Engagement Specialist Courtney Langille said. “Some of this includes being waterproof, airtight, child-resistant, suitable for food-grade materials, [as well as] extensive labelling requirements that are definitely unique to the cannabis companies, [such as] font size, placement.”

These requirements do influence how producers design their packaging, according to Langille.

“Our packaging has to be larger to accommodate all that information,” she said.

A big environmental concern with cannabis packaging is their use of plastic.

Most plastics don’t biodegrade, which causes it to accumulate and end up in places such as landfills or the ocean.

Washington state’s cannabis industry produced so much plastic waste that it clogged gutters, sewers, and landfills, the Washington Post reported the summer of 2018.

Plastic seems to be top of mind for Canadians. A 2018 EcoAnalytics report found that 65 percent of respondents feel governments should work quickly to ban single-use plastics such as plastic bags, straws, and bottles, and 32 percent said plastics in the ocean were the top three environmental issues they worry about the most.

While there is no regulatory requirement for cannabis producers to use plastic, according to Health Canada, many have turned to it to meet the child-proof requirement given its affordability.

Most cannabis packages are recyclable, but some municipalities have trouble accepting them due to their mix of materials and because they house cannabis, which is considered a sensitive material, Langille said.

Things might get worse before they get better with cannabis packaging.

Edibles are set to hit Canadian stores by mid-December, and with the new wave of legalization come their own regulations on packaging that do not seem to take excessiveness into account.

“From an environmental standpoint, it’s going to get much worse,” said Michael Garbuz, founder of cannabis companies Materia Ventures and High 12 Brands. “It’s going to be a hugely excessive amount of packaging [for edibles].”

The Health Canada regulations for edibles include a limit of 10 mg of THC per edible package, which is essentially a single serving size per package.

Garbuz says that with dried flowers you can at least get multiple doses in one package, but that won’t be the case with edibles, which will also have to be child-proof.

“[It will] take so many packages to satiate a group of people or even an individual with heavy consumption,” he said.

The edibles packaging regulations could also raise the price for consumers.

Doug Vidic, the founder of cannabis edibles company Dank D’Lights says that limiting each package to 10 mg, which he finds a “little low,” adds to the cost of packaging that is carried over to the customer.

“We don’t want to spend half of your product on packaging distribution versus the actual product,” he said, mentioning that if individual packaging wasn’t required, there could be economies of scale that could reduce the overall price. “If you have to package every 10 mg piece, it does add to your cost.”

In Colorado and Washington, edibles packages can contain multiple servings and have less strict dosage limits.

While the situation may seem bleak concerning excessive cannabis packaging, some companies are making efforts to make it more environmentally friendly.

Langille said that Canopy Growth subsidiary Tweed has recycling bins in its stores in Manitoba, Saskatchewan, and Newfoundland where customers can drop off their cannabis packaging, regardless of whether it is a Canopy Growth product or not.

If you don’t have access to a Tweed location, you can also send your package by mail free of charge by setting up a TerraCycle account and requesting a label.

Langille says that the packaging is ground into plastic pellets in Canadian facilities and given new life instead of ending up in landfills or incinerators. So far, over 350,000 pieces — weighing over 7,000 pounds — have been collected, according to the company.

“TerraCycle is world-renowned for recycling hard-to-recycle materials,” Langille said, mentioning the company has also partnered with Febreeze and Nespresso for their coffee pods. “[They work] with packing that falls outside of the comfort zone for a lot of municipal recycling programs.”

Langille expressed hope that as the industry evolves, new packaging formats will be introduced that are more environmentally conscious, such as ones that are lighter or biodegradable.

Health Canada has already amended its regulations to allow for “accordion or peel back-type labels” that should allow smaller packages and “reduce the amount of waste created by cannabis product packaging,” according to the agency.

Other companies are exploring more environmentally-friendly packaging for cannabis.

Sana Packaging is packaging its cannabis in… cannabis, go figure, by using hemp. Hemp is biodegradable, but also more expensive than petroleum-based plastic.

Tweed uses a mixture of tin, which is recyclable, and a plastic child-proof cap for its packaging.

Cannabis services company Kushco announced in March an agreement with IEKO Corp. to produce compostable and biodegradable packaging for the cannabis and CBD industries.

Health Canada’s cannabis packaging regulations not only make it tricky to create environmentally-friendly packaging, but also have an impact on companies’ ability to market their products.

The regulations outline that packaging cannot be appealing to young people, depict a person, character or animal, or associate with a “way of life” that includes “glamour, recreation, excitement, vitality, risk or daring.”

“The biggest challenge of packaging to date has been around the labels [guidelines],” Garbuz said. “We’re still at a stage where the brand isn’t given as much freedom as I think it should be to express to the customer what the product is and how it is differentiated.”

Currently only one “brand element” is allowed on cannabis packaging, such as a logo. If looking into a legal dispensary, you’ll often find a sea of plain white packages.

“If the package is covered with warning labels, it’s really hard for the company to quickly distill down to the end consumer the key points about the product that they need to know before consuming it,” Garbuz said. “It turns off a lot of consumers and keeps them within the black market.”

McCrae agrees that the regulations do hamper competitiveness with the black market.

“Without the ability to build brands and offer consumers a compelling reason to purchase from legitimate channels, we will always be challenged in swaying users away from illegal products,” she said.

McCrae notes the limitations are “way beyond what is required by alcohol companies.”

Garbuz says that while the industry has begun with regulations more in line with tobacco than alcohol, he thinks over time the industry will move more towards “alcohol-style marketing” as people find cannabis is even more benign than alcohol.

Garbuz says that cannabis may even go beyond alcohol in certain ways, such as distribution, given that non-psychoactive products can be made from it that make use of its cannabinoids, such as cannabidiol, or CBD.

Right now those products, such as topicals, have the same warnings and plain packaging as cannabis flower, but McCrae says this is “just plain excessive.”

“To have a bottle of face cream in a health-warning laden child-proof container is just plain excessive,” she said, mentioning these products carry “virtually no risks.”

For now, though, Garbuz says the government is taking a “go slow” approach to see the potential drawbacks of cannabis legalization.

“They don’t want to introduce the other end of the spectrum, which is full-blown marketing, before taking a look at true legalization and what actually has played out compared to hypotheses,” he said.

Since Canada is the first major world economy to legalize recreational cannabis, it is a leader in the industry and has decided to play it safe with regulations that may be much more strict than we’ll see years down the line.

While plastic containers are a quick and cheap option for companies, customer feedback could make them change their tune soon. As for marketing, time will tell as well if the labelling restrictions will change, and the uniform white cannabis packaging will be replaced with a rainbow of different brands.