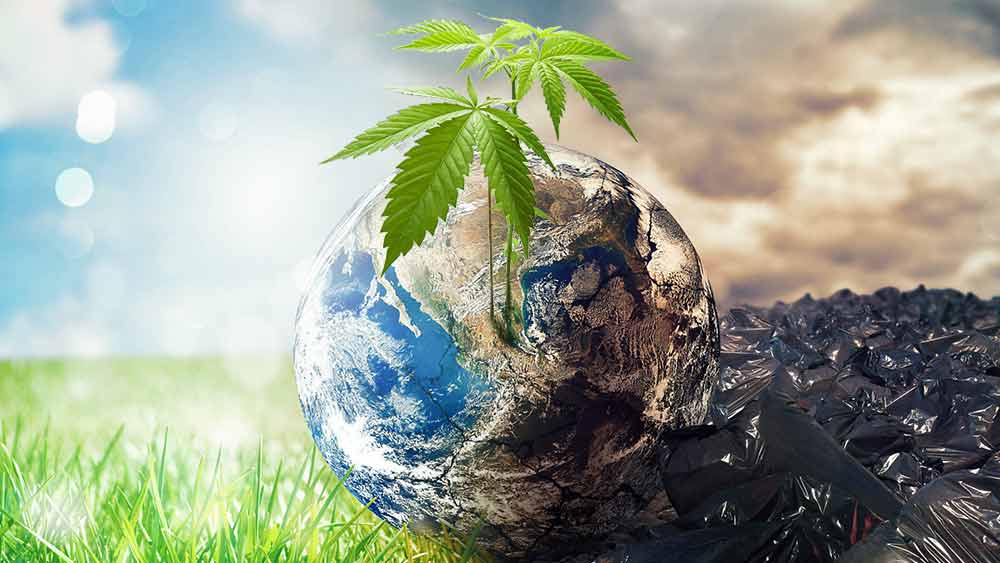 Known as trespass grows, the Illegal cannabis cultivation sites are creating a spiraling ecological catastrophe by contaminating the environment, killing wildlife, and leaving piles of hazardous waste behind.

In September 2019, the CROP Project, a non-profit dedicated to cannabis removal from public lands, invited the press to visit an illegal grow site in the Shasta Trinity National Forest.

The two are examples of what is referred to as a “trespass grow”, a temporary cultivation spot controlled by DTOs (Drug Trafficking Organizations), which is exploiting natural resources and leaving behind an environmental hazard.

Almost the same scenery was encountered on both of these sites: abandoned camps, miles and miles of irrigation tubing, and opened bottles of banned toxicants.

Lassen National Forest provided a gruesome extra detail for the eye: carcasses of a bear, a gray fox, and a turkey vulture scavenged by the flies that died within seconds.

Scenes like these are not reserved for California alone: trespasses were also located in Oregon and Colorado. What’s worse, growers often break them into many subplots to avoid being raided, thus spreading the environmental impact.

To unfold the issue, we spoke to Dr. Mourad Gabriel from the IERC, and a member of the CROP Project (a coalition of conservation organizations, tribes, elected officials, law enforcement agencies and federal land managers.)

Once the illegal cultivators find a secluded spot on public land, they set up a temporary encampment with armed guards who will keep the site safe from unwanted visitors. They often bring entire families, including children, to live there until the harvest.

To obtain a cultivation surface, growers raze a forest, thus creating bare pockets in the woods that result in a loss of sensitive wildlife habitat for many species, destroy soil stability, and increase the likelihood of landslides.

Setting up irrigation systems is an environmental calamity of its own.

In a nutshell, clandestine cannabis cultivation is sucking up streams and rivers, leaving no water to sustain aquatic life, and triggering a chain of harmful threats: loss of watering holes for wildlife, higher water temperature that allows for easier transition of diseases, etc.

According to IERC’s estimates, a site in Shasta-Trinity alone diverted more than million gallons of water from the New River, which is a natural habitat of threatened spring-run chinook and coho salmon.

What’s more, because their irrigation systems aren’t as efficient, trespasses tend to use more water than necessary. In some cases, the growers just leave the system running, even if there are no plants to water, causing severe supply shortages in this drought area.

And somewhere down the stream, a legal (cannabis) crop will be the victim of the shortfall, or, even worse, be tainted with contaminated water.

Threats to Wildlife and Humans

Sadly, the settlement is just a tip of the environmental hazard, explained Dr. Mourad Gabriel.

The illegal growing sites use banned chemicals to facilitate the production, and they do so in an unscrupulous manner, which causes contamination on a landscape level. All raided sites contained dozens of chemicals – pesticides, rodenticides, and fertilizers – some of which are extremely dangerous.

Nine out of ten researchers found carbofuran, a highly lethal pesticide that can kill a fully grown bear.

“For you or me, it would take no more than half a milliliter. That’s how detrimental carbofuran really is,” said Dr. Gabriel.

And trespass growers aren’t applying carbofuran in milliliters. They are using quantities that can keep the surroundings contaminated for a year.

On one of the cleaning-ups, Dr. Gabriel encountered a peculiar cannabis plant that sprouted from a leftover seed (it had a taproot), survived a winter and got itself pollinated. Turns out, it was positive for carbofuran.

This plant is a perfect illustration of the contamination scope on trespasses.

“In the soil, carbofuran was supposed to last between 20 and 60 days, which means a year from then it should be gone. This plant led us to one and only conclusion: the cultivator used the product not in a diluted form, but in a highly concentrated manner that contaminated the soil. When the seed was sprouting, the roots sucked up the carbofuran in the soil, and then impregnated the leaves with this pesticide,” clarified Dr. Gabriel.

He continued: “And then we see animals consuming the cannabis out in the field, actually eating plants because they’re high in sugar and the smell lures them.”

Animals get intoxicated in other ways as well: by consuming dangerous chemicals directly because their flavor attracts them (e.g., rodenticides are often flavored like peanut butter), or by eating contaminated prey. Either way, the toxic exposures are found across the food chain, including species protected by the ESA act (e.g. northern spotted owl).

But risks expand to humans as well.

“Recreationists that are participating in public lands are also at risk of being exposed,” explained Dr. Gabriel.

Here’s a scary possible scenario. Carbofuran is often left on trespasses in soda or Gatorade bottles. It’s colored bubblegum pink. Should a child pick it up and sniff it or lick its fingers, the effects would be immediate.

“And don’t forget, cultivators are growing cannabis here for a black market out there. The individuals are choosing to go with cheaper, unregulated products that could really pose a health threat to them,” noted Dr. Gabriel.

Scientists in the Midst of the “War on Drugs”

But perhaps people who are at the highest risk of being exposed are those who participate in trespass clean-ups. Many end up hospitalized, and they regularly have to take tests on chemicals’ exposure.

The teams are dealing with armed members of DTOs, thus facing a whole array of dangers.

Dr. Gabriel himself experienced some of them when he gained an unwanted reputation as a “scientist who helps cops.” Among many other safety issues, the poisoning of his dog was perhaps the most painful consequence of this reputation (the dog was poisoned with brodifacoum, an anticoagulant rodenticide).

“Imagine a specialized law enforcement team dealing with clandestine illegal activity. And then imagine a scientist in there. That is not something you think you’re going to be immersed into while studying wildlife disease ecology or conservation ecology,” admitted Dr. Gabriel.

“There were instances of violent or potentially violent confrontations. Back in 2013, when we began close cooperation with law enforcement, we [the scientists] were on site not after a raid, but before that, getting the first sight on a trespass,” said Dr. Gabriel.

Back in the years between 2009 and 2012, when Dr. Gabriel and his team became aware of what was happening on public land, nobody knew the extent of it.

“We knew there were trespasses out there, but we didn’t know how prolific they were. Our estimates were that we were talking about a site here or there, perhaps dozens of them in all. But when we started collecting data and inspecting the terrain, we realized that hundreds of sites were occurring in California alone,” noted Gabriel.

To ensure that growers don’t come back and also to prevent environmental harm, the sites have to be remedied, which is an expensive procedure because it demands workforce, equipment (sometimes helicopters), testing instruments, etc.

“We were going grant by grant until we were awarded 1 million dollars grand to do clean-ups in 2017. Our intention was to remediate over 100 trespasses, a lot of which would cost about $10.000 to $15.000 to clean up. I’m proud that we managed to remove 190 grow sites in an area that had about 300 of them in all. Also, the team was able to continue its work in the following years thanks to this grant, up until the end of last year when it ended,” explained Gabriel.

“And now, for 2020, there is no grant,” said Gabriel, admitting being frustrated by the fact.

“We still have a backlog of several thousands of sites to clean up. And bear in mind that the longer we wait, the more it will cost us to clean up. If a site happens, say, today, and we remediate it the same year, $5.000-$8.000 will suffice. But, as time goes by, there’s going to be more contamination, overall damage, and accessibility issues,” Gabriel explained.

The feeling of frustration is completely understandable, when we know that this issue could be completely resolved with a continuous streamline of funding.

“The goal of resolving this issue isn’t as far-reaching as, for example, putting an end to climate change. It has a very simple solution, and that’s what the CROP is advocating – to get the federal congress to be dedicated and provide a ten years funding cycle. We would never have this problem again,” explained Gabriel.

Is Legalization a Silver Bullet?

A lot of reporters and people who are somehow involved in the issue think that legalization, especially on a federal level, can help remove trespasses from public lands. Dr. Gabriel characterized it as a possible solution, but not as a silver bullet.

“There’s a misconception that legalization is going to solve the issue immediately. Perhaps that’s the reason why there are no grants available for 2020. But people forget we have a backlog of several thousands of sites to clean up,” he added.

He also noted that a state-by-state approach isn’t as effective.

“The legalization in California has definitely slowed the illegal growing down, but it hasn’t got rid of them completely. Trespasses here are [still] cultivating marijuana for markets like Missouri and Montana, Wyoming. That’s maybe where the question of federal legalization comes into play,” concluded Gabriel.

Final Thoughts – the Price We’re Only Beginning to Understand

Even if there are folks who don’t feel concerned about, say, the species of fishers or northern spotted owls, the multifold issue of trespasses should still worry them for other reasons.

Commenting on the amount of cannabis grown illegally, Dr. Gabriel pointed out that law enforcement suspects that a part of it could end up on the legal market as well.

“I’m a scientist, hence don’t feel authorized to state official estimates. But the majority of law enforcement I talked to admitted they do [have this suspicion]. And it does seem probable, especially when you consider the latest issue of contaminated cannabis on the legal market.”

What he could say with confidence is that vast quantities of marijuana are grown illegally, and it does seem unlikely they’re being produced solely for black market.

As always, he was precise: “We visit 5 or 6 sites like this per week. Each of them has approximately 5000 plants, so that’s 25000 plants in one week’s worth of cultivation. It means that trespasses produce 8.000 to 12.000 pounds of cannabis a week. And I’m talking about quantities that only I’ve seen.”

To be completely honest, Dr. Gabriel agrees there are “a lot of good guys” in the industry who play by the rules and want to meet all the California standards for growing weed.

“However,” he says, “we all know that there’s plenty of shady items on the market, and plenty of ways they can bypass or circumvent the standards, only to earn more money with a black market pound.”

His calculation does make you wonder. Are we all going to pay a high price for trespasses, both in terms of environmental harm and potentially harmful products?