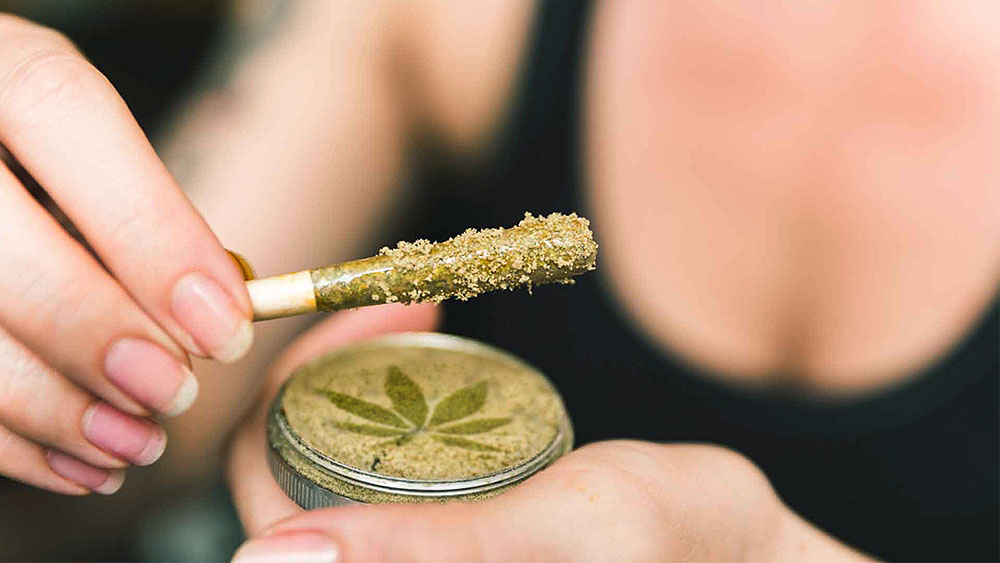 In this article, we will explore kief and several other products that can be made from it.

Kief (sometimes also spelled keef) is a fine, dusty material that you often see on high-quality cannabis flowers, and it consists of fallen resin glands which contain terpenes and cannabinoids.

If you have a weed grinder that you use often, you most likely have a kief chamber at the bottom of the grinder. Grinders usually have two or three chambers which hold different-sized pieces of weed.

The top chamber is where you put the weed before grinding it, and it holds the biggest pieces after grinding.

More expensive grinders have a middle chamber that gathers the most weed, and sifts kief through a filter to the bottom chamber.

When you grind weed, the bottom chamber collects kief. Simple as that.

You’ll see that, above the chamber, there’s a very fine filter which can be up to several microns.

This filter is in charge of allowing the resin glands (trichomes) to fall to the bottom chamber.

So, in a way, kief is a naturally concentrated cannabis. It is well known that hash and other concentrates made from kief are often stronger than those made from flower.

Kief is best when fresh, however it doesn’t go stale quickly, so you can keep it in your grinder for a while.

How strong is kief?

Kief is stronger than the flowers just because it’s completely made of trichomes, which are the resin glands where cannabinoids and terpenes are.

One of the reasons why kief gets extracted from the flowers is because it’s super potent.

You can’t really put an exact number the THC levels of kief, as it may vary from one strain to another.

After all, kief is a byproduct of weed, but you better believe it’s much more than just that.

Can you smoke kief?

Yes, you can absolutely smoke kief.

In fact, kief is best when smoked in a joint, however there are people that use it when dabbing with a metal sift.

Make sure not to try to consume it with your dab nail. Take a look at the video below to learn why that might be a bad choice:

The downside to this kief consumption method is that you’ll just ruin your nail and won’t really get the real taste of the terpenes if you heat up the nail too much.

Since it contains resin glands (which is where terpenes are), kief smells particularly nice when lit.

However, I wouldn’t recommend smoking kief on its own as I believe that to be too much of a waste.

Due to its poor cohesiveness, kief isn’t good for vaporizers and similar mechanical utensils, as its particles tend to fall through and stick to the important parts of the vaporizer.

What is the best way to use kief?

The best way to use kief is to either sprinkle it over a joint, or smoke it in a glass bowl.

I’ve heard people saying that they used kief for edibles which turned out way too strong, and I had a couple bad experiences with edibles so I wouldn’t mess with that even if I was offered.

We already mentioned that vaping kief is risky as it may fall through to vital parts of the tool and then break them.

Dabbing is out of the question as well, as it’s just too much of a volatile way of consumption for something as delicate as kief.

Is kief the same as hash?

No, although it’s pretty damn close.

Kief is made by sifting cannabis flowers and collecting the resin glands that fall off.

Hash is the product of compressing the sifted kief, and there are multiple ways to do it. Each of these ways is unique to a country or a region, traditionally made in Asia.

We covered all types of hash in our article which you can read by clicking on the link below.

How to make kief hash

There are many ways to make hash from kief, however they all boil down to the same thing:

Apply heat and pressure until kief becomes somewhat cohesive, then place it somewhere cold to solidify.

I ran into this recipe a few weeks ago, tested it, and was simply blown away by the results.

Here is what you’re gonna need for this method:

Spread your kief over a small surface on the paper, and then fold the paper over the kief.

Fill the glass jar with hot water, as hot as you can, but you should still be able to hold it. If you can’t hold it because of the heat, use pot holders.

Roll the hot water-filled jar over the top folded piece of paper and the kief underneath it, for at least 8-10 minutes.

Wrap the paper in a sort of envelope fashion, so that nothing falls out, and put it into the refrigerator for at least an hour. This will make it stick together and separate from the paper more easily.

20 things you should know about kief

We understand that marijuana, let alone kief, is a very unfamiliar subject to many people around the world due to its illegal status in so many places.

Education is very important in the cannabis industry because there are countless misconceptions and flat out myths about weed and its products.

The questions below will help you make more sense of kief.

Which is better—kief or hash?

Hash is better than kief because it’s super concentrated and is a true cannabis extract. However, if you are looking for max applicability, kief can be used in many situations where hash can’t, as it’s structure makes it much easier to manipulate.

It’s highly unlikely that kief can go bad because people save up kief in their grinders for months and then smoke it. I have never even heard of kief mold poisoning in my life.

Can kief be smoked?

Yes, kief can be smoked and we strongly recommend you try smoking it first before attempting any other consumption method.

Can kief be used for edibles?

Yes, kief can be used for edibles. Edibles made from kief tend to be significantly stronger than those made from regular cannabis butter, or cannabis-infused oil, so ingest these with extreme caution.

Can kief be vaped?

In theory yes, however it may ruin your vaporizer, rendering it unusable. Since kief is made from hundreds of tiny resin glands, they may fall through and jam vital parts of the vaporizer, thus breaking it for good.

Can kief get you high?

Yes, kief will get you high, even higher than regular weed. Smoking kief can give you the same high as smoking BHO or other extracts because of its high THC content.

Can kief be dabbed?

Yes, however it is a waste of kief as there are other ways of using kief to get an instant high, such as sprinkling it over a joint. If you insist on smoking it in a glass utensil, use a regular bong.

Can kief make you hallucinate?

Seeing how cannabis does fall into the psychotropic group of drugs, this question makes sense for a lot of people.

However, fear not, as kief actually cannot make you hallucinate, just because cannabinoids from pot do not produce effects in the same way as hallucinogens—this group of drugs works by activating 5-HT2A receptors, unlike for example CBD which activates 5-HT1A receptors and THC which activates G-protein coupled receptors.

To put it simply, too much kief might make you hear a door squeak when it’s really not there, but that’s about as far as it can go.

Can kief be purple?

If you’ve used your grinder for cannabis that has purple pistils, you may get purple kief. This is still a pretty rare situation and you should definitely take a picture of that and post it on social media.

Can kief get moldy?

In my decade-long experience in cannabis, I have never seen kief become moldy, even after spending months in a grinder. Just don’t keep it in a bag exposed to high temperatures and sunlight, and you should be fine.

Why is kief so potent?

Kief is potent because it is made from tiny resin glands which hold terpenes and cannabinoids within. It’s basically a natural cannabis concentrate, with high levels of THC, which is why it’s so strong.

Why turn kief into hash?

Turning kief into hash is a great way to make sure it won’t spill on the floor, which would basically render it useless. Also, hash has a much different taste and aroma, and tends to be more potent as well.

Why separate kief from the bud?

Kief is a delicacy among cannabis users, and when added to a joint, it gives users an unprecedented high. People who smoke cannabis love experimenting with weed to achieve different effects and separating kief gives them a unique way to use the entirety of their bud.

What to do with kief?

Smoke it, press it, put it in your butter. Kief is very versatile when it comes to its application. You can do just about anything with kief as you can with weed, but know that the end product is going to be way more potent.

Are trichomes and kief the same?

Kief is made from the crystalized tips of trichomes which hold resin glands. Trichomes are the translucent hairs on top of the weed which keep the plant safe from harm. Long story short—yes, kief and trichomes are basically the same thing.

Are kief catchers worth it?

Yes, and make sure you get one when buying your next grinder. Having two or three chambers is always better than having none.

How much kief do I need to make cookies?

Just because kief is so potent, you won’t need much, so ⅓ of a gram, or ½ gram per portion should do the trick.

How much kief is in an ounce of weed?

This really depends on the strain. If the strain you are buying is known for being a resiny strain, then you should get at least 1-2 grams of kief per ounce. Some strains, like White Widow, are known for being loaded with kief.

Is kief the same as kush?

No, kief is not the same as kush. Kush is a subset of cannabis strains, usually crossed from the traditional strains that originated in the Hindu Kush region, mostly with indica genetics.

Kush can also be a slang for really good weed, in which case it again isn’t the same as kief.

Is kief the same as weed dust?

Weed dust or weed shake is what you would find on the bottom of a big bag of weed.

Say you had a few pounds in a bag, you pulled it all out and you are left with a bunch of tiny bits of weed. That’s weed dust, or weed shake, and it’s not as nearly as fine as kief.

Great information! You’re on my homepage now. Thanks G