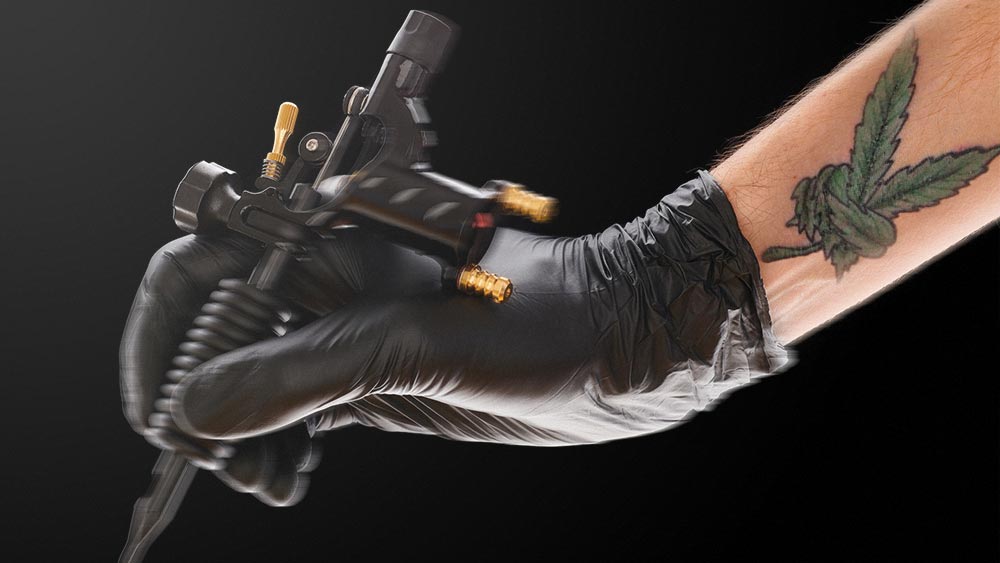 In a quest to find the best weed tattoos, I’ve spent a considerable amount of time scouring Instagram’s prominent cannabis and tattoo-related hashtags.

I figured the gram is the best possible place to look for this type of content, simply because artists have a direct incentive to showcase their work on such a popular platform.

Focusing on Instagram also allowed me to send some clout their way, which is something I really wanted to do. Cannabis has been receiving severe mainstream popularity in recent years, which probably influenced a lot of people to exhibit their undying love of weed in the form of a tattoo.

After several hours of sifting through an endless stream of cannabis tattoo pics, I was astounded by the amount of cliché, mediocre and straightforward awful works.

Weed is famous for its ability to impair judgment, and this impairment probably had a lot to do with the majority of these questionable choices.

To get the long story short, here is Greencamp’s best weed tattoo selection, which will hopefully inspire you to get a unique and sigh-worthy weed tat.

I tried to cover a wide variety of styles, so expect a lot of different techniques and designs.

This majestic neo-traditional piece was done by Jean Le Roux at Good Fortune Studio in London.

The quality of this tattoo is undeniable, and I especially enjoy the subtle details like the luscious smoke coming from the carefully crafted doobie she’s holding.

This atypical tat was designed and executed by Jay Jorée, at Third Eye Gallery in Dallas.

In this particular artwork infamous weed icons Jay and Silent Bob are depicted, and it’s a signature trademark of Jorée to cover the characters face with a symbol or a scene that’s especially meaningful for the tattoo.

These amazing dual chest/back pieces were done by Andre Cruz in Sao Paulo.

The realistic bud-bearing female plants were captured in the flowering stage, while the red flower of life symbol on the lower back (and the mandala on the chest) exude a sense of sacredness and importance.

This insanely detailed blackwork piece was thought up and executed by Chase Martines in Denver.

This type of grim iconography definitely isn’t everyone’s cup of tea, but is a dream come true for the edgier cannabis enthusiast. Coffin-like outlines are a frequent motif in Martines’ work, and this tattoo howls “high till I die”.

This adorable new-school depiction of a severely stoned Buttercup holding up a bong was created by Courtney Raimondi, an NYC-based artists who specializes in super-kawaii colorful designs.

The garden gnome carrying a delicious nug in a cart is Filipe Monteiro Rocha’s design, and it’s an extremely playful and whimsical traditional piece.

This mischievous little devil is Yoojin’s creation, and I really like the simplicity and cuteness of her designs.

An illustrative technique such as this surely isn’t for everyone, but if you’re looking for a nonchalant way to flaunt your love for weed (and Satan I guess), this sort of tattoo just might be it.

This is another beautifully colorful new-school design, done by Eugenios Simopoulos from Athens.

I have to admit this type of vivid imagery isn’t really my thing, but the quality of Eugenios’ works is indisputable.

This design has a very vintage feel to it, and I love that the nug is hitting a concentrate dab rig.

Numerous El Doctorado’s works feature this naughty flower, and he really seems like a fun-loving dude.

Here is another traditional dark piece for all of you rock ‘n roll/metal fans out there, courtesy of Coque Sin Amo, an awesome artist from Barcelona.

I like how the inverted leaf goes with the other tattoos on his body, and the position below the belly button is also a nice touch.

This adorable cutie-pie bunny was done by Chelsea Jane in Orange, California.

The entire tattoo is very delicate and beautifully executed, and also makes an excellent metaphor since lettuce is the favorite treat of rabbits.

The “Sweet Leaf” piece was tattooed by Roach Cola at Jersey City Tattoo.

It’s a pretty original twist to the famous (and somewhat worn out) cannabis leaf symbol. The unexpected yellowish shades definitely make the entire tat stand out.

These delicious nugs were done in Chicago, by the amazing Kevin Leary.

If you’re a cannabis aficionado and have a lot of tattoos, using buds to fill in the blanks on your skin seems like a good idea, since they can easily fit any surface.

This is by far my favorite cannabis tattoo, and it was done by Dominik Szparag from Poland.

The design appears quite contemporary, while the odd-colored frog’s firm determination towards the bag make this tat really unusual.

This over-the-top saturated stylization isn’t something I’m particularly fond of, but despite that I wanted to give a big shoutout to Lliam Noy from Vancouver, because he added psilocybin mushrooms in the mix.

Psilocybin is by far my favorite psychedelic compound, and since both weed and mushrooms are naturally-occurring mind-altering substances, they go perfectly together on a tattoo.

The eye of providence hovering over the entire piece is also a nice touch.

This trippy old school cat-bud amalgamation comes from China, and it was tattooed by Tatt0_0.

Even though it was carried out with a vintage technique, this piece in my opinion also has a very modern feel to it, making it a really dope design altogether.

The flashy traditional bud was gorgeously drawn by Eve Mansell from Manchester.

The surgically-precise neo-traditional nug comes from Milano Italy, and it was created by the incredible Samuela Maggi.

What makes this tattoo stand out is the unusual color palette on the flower, and the metallic shading on the jar is also superbly done.

The final 19th tattoo we have for you also comes from Italy, courtesy of the tattoo artist Fabio Salassa.

This is another neo-traditional piece, and the tight grip on the bud probably stands for love and affection towards our cherished flowers.

If you have a favorite cannabis tattoo and think that we should add it to the list, please leave us a link in the comment section.