Journey Cannabis and Music Festival, which called itself “Canada’s first cannabis and music festival,” has been cancelled due to new bylaws in Vaughan, Ontario.

Journey was originally scheduled for August 23-25 for a three-day run at the 990-acre Boyd Conservation Park north of Toronto. 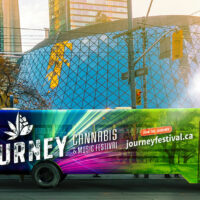 Canada is getting its first massive cannabis music festival this summer

The festival wasn’t going to sell its own cannabis but have a strict “bring your own cannabis” approach, which could be enjoyed along with musical acts, educational talks on the drug and booths selling cannabis swag.

While the festival signed a contract with the Toronto Region Conservation Authority and Boyd Conservation Park, a statement from Journey says that Vaughan passed a bylaw May 14 that only allowed medical cannabis to be legally consumed in a public space, as long as proper documentation is presented.

“We are saddened by the decision of Vaughan councilors to restrict recreational consumption of cannabis at a private event,” Journey CEO Murray Milthorpe said in a statement.

“Policymakers in Canada should welcome any effort by multi-stakeholder groups to educate Canadians about the legal vs. illegal market, the health and safety aspects of consuming cannabis, and the dangers of substance abuse.”

“Sadly, Vaughan City Council is on the wrong side of history here.”

Milthorpe says that the introduction of the bylaw was never mentioned in previous meetings with city officials.

The City of Vaughan said in a statement that no special events permit was applied for or issued for the festival, but Mithorpe says the festival was working directly with the city on the permit, and it only had to be submitted two weeks prior to the event.

Vaughan also said its smoking bylaw had been “under development since 2018,” and the timing of its implementation was based on a “public process and reasonable timelines” following cannabis legalization last October.

Vaughan has also opted out of licensed retail cannabis stores in the city, the city’s statement notes.

Journey says that those who purchased tickets will be refunded fully in the next week.

The festival asserts that Vaughan’s bylaw move was “about self-preservation and status quo thinking and is a stigmatizing action that hurts the legal market.”

This may not be the last we hear of Journey, though.

The festival says that organizers are currently working to secure a new venue for 2020 that will be announced in the coming months.

In the meantime, the Journey “Cannabus” will be touring the country to talk about cannabis with Canadians.