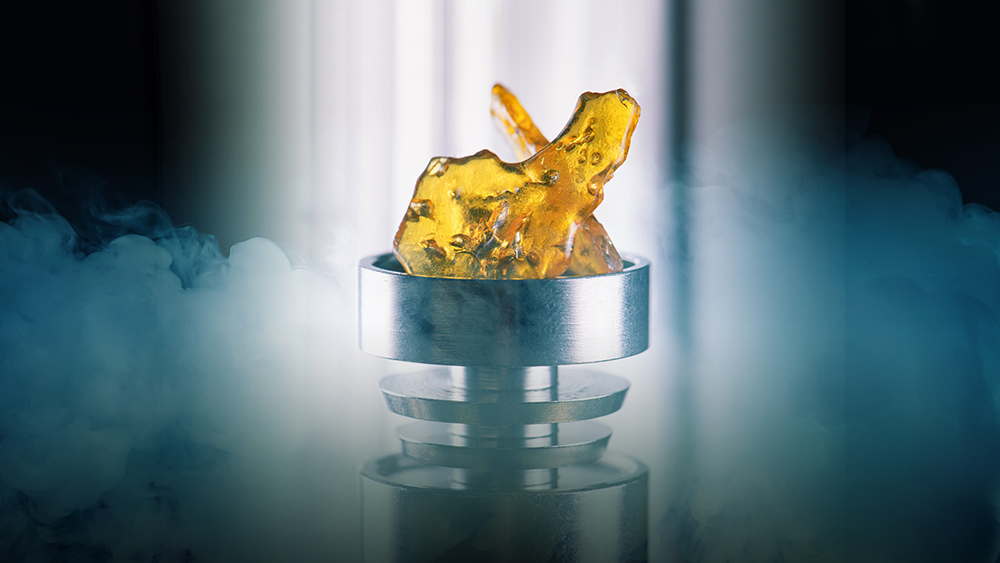 Budder is definitely one of the most beloved canna-concentrates on the market, but what exactly makes it so special?

Let’s go through all of the subtleties that make this powerful extract such a fan favorite.

What is budder wax?

Budder, also known as budder wax, is a type of THC-rich cannabis concentrate. It shouldn’t be confused with cannabinoid-infused butter (aka cannabutter), which is used for making edibles and other delicacies.

Budder is amber/yellowish in color and closely resembles regular butter in texture. This creamy consistency is achieved through a pretty complicated process that we’ll be covering a bit later down the road.

Within the complex cannabis concentrate universe, budder is considered as one of the waxes, which is an umbrella term for all the concentrates that possess a wax-like texture.

What primarily separates budder from other wax-like concentrates is its high terpene profile, and this trait makes budder more flavorful and aromatic, compared to its “competitors”.

Great quantities of terpenes combined with a lot of THC (and of course other cannabinoids) make budder wax an extremely popular concentrate choice, but it’s not for the faint of heart – as it packs a powerful punch.

Recent technological advances in concentrate extraction made it possible that certain waxes retain a high-terpene profile while preserving great levels of THC at the same time.

As a result, we now have budder waxes that are over 80% THC, which are also extremely flavorful because they have a ton of terpenes in them.

Another reason why budder is so cherished is that it can be easily manipulated.

Fully liquid oil concentrates tend to be very tedious for use (manipulation-wise), while harder crystalline concentrates like shatter are too solid and tend to break off and fly away, which creates a lot of hassle with every use.

Budder, on the other hand, is the creamiest type of wax and is deemed the perfect concentrate, at least as far as manipulation/handling goes.

What is budder made of?

The process of creating budder is somewhat complicated, as it requires a lot of sophisticated equipment.

Making budder is also really risky because it involves flammable solvents like butane, which becomes even riskier if the aforementioned adequate equipment is not used.

Just as a friendly reminder, we here at Greencamp don’t advise you to create your own DIY budder. Even though beautiful budder wax is precious, please don’t gamble your life attempting to create it.

Trying to make extracts with shabby equipment can be very dangerous. A lot of people have been seriously injured in the process, and some even lost their lives. Even if the extraction goes smoothly, too much solvent can remain in the mixture, which is very hazardous to health.

Now that we have that out of the way, let’s check out how it’s made.

The process begins with finely crumbled buds, which are placed in a specialized airtight elongated tube.

In this tubular container, the buds are drenched with either butane, propane, or with CO2.

Using pressure, the cannabinoids and terpenes are separated from the rest of the plant matter and attached to the liquid solvent.

Butane is considered the perfect solvent for buttery consistencies.

The second step in the process is getting the cannabinoids/terpenes (which are now completely mixed with the solvent) in an oven-like airtight container.

Here the mixture is exposed to heat and air pressure which purges the solvent, leaving only the cannabis compounds.

When it’s made with professional (and very expensive) equipment, the end result is around 99.6% pure budder.

Once it starts crystallizing, the mixture is whipped like cake batter to achieve a beautiful buttery consistency.

What is the difference between wax, shatter, oil, budder?

There are many different types of concentrates based on their consistency, so in order to make things a bit clearer, let’s quickly get acquainted with each of them.

Oil concentrates are liquid cannabis extracts, and they generally tend to be very aromatic and flavorful. But, because they’re so gooey and slimy, it’s hard to say that oils are user-friendly.

Their THC levels are also slightly lower compared to waxes and shatters.

Wax-concentrates are best suited for manipulation, and they also have a fantastic “THC to Terpene” ratio, which basically means that they are very psychoactive, but also retain a bunch of terpenes, resulting in a wonderfully rich aroma.

Honeycomb wax is the lightest and airiest of the wax concentrates, with a texture that resembles a bee’s honeycomb. It is very brittle and tends to break.

Budder is viewed as a medium cannabis wax, and it has the creamiest consistency. The moist texture makes budder perfect for manipulation (placing it on a rig, or in a vaporizer), as it’s very easily scooped up.

Crumble has a cheese-like structure and as the name implies, it tends to crumble into chunks. It can also be broken by hand, which is quite convenient.

Of all wax-like concentrates, budder is usually considered the top gun of the group, but of course, some people favor honeycomb and crumble wax.

Shatter is a see-through crystalline cannabis concentrate, and it usually has truly massive cannabinoid levels.

Unlike waxes and oils, shatter isn’t as aromatic, as it lacks the essential terpenes which were purged during the manufacturing process.

It’s also unrewarding for manipulation because of its hardness, as pieces of shatter tend to break and fly away when you “cut” the shatter with a dabbing pick.

How to use budder?

If you’re planning to use budder, there are only two proper ways you can go about it.

I’ve seen numerous articles suggesting sprinkling your budder in joints, igniting it in bongs and other sorts of nonsense, but seeing how you already paid a pretty penny for your concentrate, do yourself a favor and treat that creamy extract with some reverence and respect.

So, you can either use a dab rig to handle your budder, or a vaporizer tool capable of vaporizing concentrates (only premium vapes have this option).

Both of these gadgetries can be considered expensive, but if you plan to enjoy extracts regularly, you need to equip yourself properly.

When using budder, the main thing to focus on is the temperature.

Because this particular concentrate retains a lot of terpenes, excessive heat will burn and destroy these delicate molecules, and you won’t be able to enjoy the lush taste.

In order to savor the flavor of terpenes, the temperature shouldn’t be exceeded, at least not by much.

Here are some of the most prominent compounds in cannabis and their boiling points, so to take full advantage of budder, don’t go over 450°F.

The vapor from a temperature such as this will be very gentle and smooth, but the psychoactive effects will definitely be more subtle than with greater heat.

If you’re looking to exploit the full psychoactive potential of your budder, go over 600°F.

You should know that combustion tends to occur at these temperatures and that vapor combined with the smoke will be harsh on your lungs. You’ll probably experience a serious coughing fit, especially if you’re prone to coughing from weed in general.

If you’re using a dab rig, it’s best to have an electronic nail, which is basically a device that allows you to fine-tune the precise temperature of the dabbing surface.

If not, in order to achieve a lower temperature (~450°F), blow torch the dab banger (dabbing surface) for about 30 seconds, let it cool off for another 40~60 seconds, and then place the budder in it.

Using a vaporizer is much easier, just set the desired temp, and you’re good to go.

FYI – Some oily residue is bound to remain at lower temperatures, unlike with higher temps, where pretty much everything will be vaporized (both with dabs and with vapes).

Pretty much all concentrates (if they’re properly stored) have a shelf-life of about one year.

The biggest enemy of budder wax is open air, as it speeds up the degradation of both terpenes and cannabinoids.

Terpenes will degrade more quickly than THC which, over time, transmutes into CBN, a very sedative variation of the THC molecule.

Keeping your budder in an air-tight container will ensure that your extract remains intact. Also, make sure to avoid any heat and light.

If you noticed that your budder has a sugar-like appearance, don’t be concerned, because that is a common and non-dangerous process known as nucleation. What you do need to look out for are tiny clumps that are white or pale yellow in color.

These are coagulated lipids, which are potentially hazardous and definitely shouldn’t be vaporized.

What is stronger, budder or live resin?

The most important difference between live resin and other forms of cannabis concentrates is the preservation of terpenes.

Producing live resin implies a very sophisticated closed-loop process in which the cannabinoids and terpenes are delicately separated from completely fresh plants, unlike with budder and other concentrates, whose buds go through the process of curing (which in general diminishes terpene levels).

This difference makes live resin a greater delicacy than other concentrates, as its flavor is truly unprecedented.

As for the potency, both budder and live resin express staggering quantities of THC (approximately somewhere around 80%, which greatly depends on the producer), but live resin is far more expensive because it has a much more exquisite taste/smell.

What is BHO budder?

BHO budder refers to any type of budder that was made with butane as the solvent.

As we previously mentioned, butane is the best possible solvent for budder, as it intensifies the creamy consistency of the end product.

What is kush budder?

Any type of budder wax that was produced from a wide variety of mostly sedative kush strains of cannabis is usually called kush budder.

What is live budder?

Live budder is essentially a live resin concentrate (which has a lot more terpenes than normal budder) that was whipped into a creamy consistency, similarly to a regular budder wax.

So, to be clear, live budder is live resin, but with a budder-like texture.

What is honeycomb budder?

As we mentioned, honeycomb wax is a concentrate that has a slightly lighter and airer consistency than budder wax.

Honeycomb budder is an amalgamate of those two, expressing characteristics of both types of wax.

What is rosin budder?

Rosin is a type of cannabis extract that doesn’t involve any type of solvent during its production but is instead created by applying heat and pressure on first-rate hash.

So, rosin budder is essentially regular rosin that’s been whipped to a buttery consistency.

What is puna budder?

Puna budder is a hybrid strain of cannabis (a cross between a Hawaiian sativa, and an Afghani indica), and it shouldn’t be confused with any type of budder-wax concentrate.

I just opened a jar of butter live concentrate. It has a crumble texture to it. It looks like it's old. But it's brand new. A white paste it looks like.

All I can say is I'm jealous Frank... have fun tho.

can I make edibles with cured budder?

I would advise against it :)

Can I put this in a pen with coils? Thanks

Thank you for covering all the basics! You answered questions I didn't even think to ask. I know who my go-to-guy is for future questions!!! Thanks again! Be blessed and stay GREEN!!!

Thank you Cheryl, you're very sweet:)

Yes that's right, opting for a higher temperature ensures that every little bit of THC is released, but it destroys the terpenes as they are much more volatile.

If I'm turning shatter into budder what is the temp/time I'm looking for?

What is the process of making budder?? vacuum temperature and times ?? All in the purpose of research plz