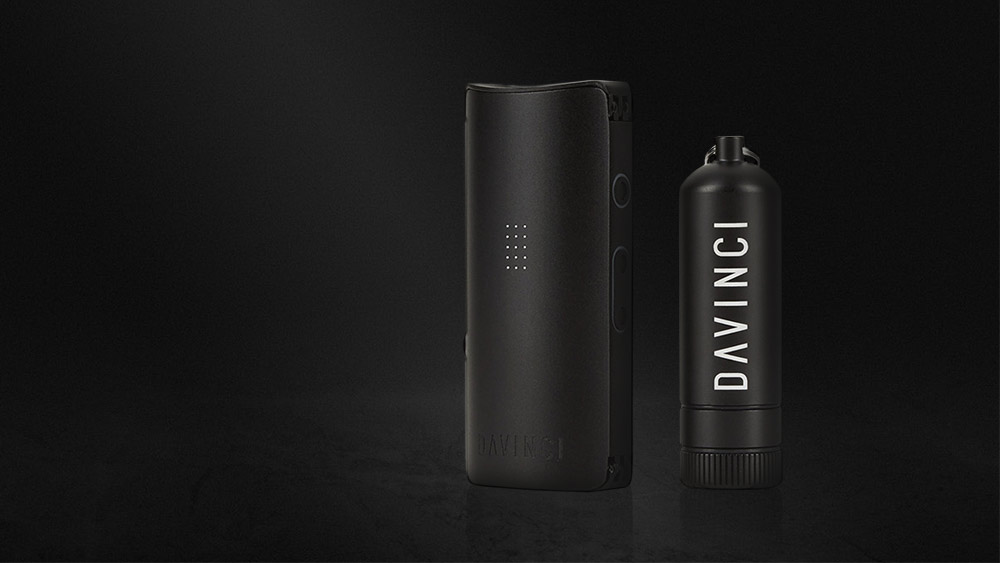 Pocket-friendly vaporizers are becoming ever so popular.

What’s not to love about a super portable, light, and easy to use device that can bring you hundreds of hours of weed-induced pleasure?

Though there are countless EDC vaporizers on the market nowadays, most of them have a tough time competing with the DaVinci MIQRO in terms of portability.

Following in its older brother’s footsteps (DaVinci IQ), the MIQRO maintained the same level of smarts and sophistication but became more accessible, practical, and more appealing to the average on-the-go stoner.

Let’s see how and why this gorgeous little device turned the industry on its head and became one of the great pillars of portability!

It’s important to note that the DaVinci MIQRO can be purchased in two different versions. The first one is the standard version which retails for around $150, whereas the second one is the Explorer’s version which is around $50 more and includes a myriad of different accessories.

The difference in price between the two versions isn’t insignificant, so most users find that paying a bit extra for the Explorer’s version is well worth the investment, especially because of the carrying case and the extra battery.

Now, the MIQRO is a conduction type vaporizer suitable for dry herbs only, therefore, if you’re an avid dabber, this might not be the right vaporizer for you.

However, in order to enable the best possible vaping experience, DaVinci made sure to provide their customers with two types of mouthpieces.

The flat mouthpiece is definitely the better option if your MIQRO is traveling with you. Due to its limited protrusion, it’s less likely to get filthy when kept in confined spaces like the insides of your pocket. However, a shorter mouthpiece means a shorter air path, and that means that the vapor has less time and space to cool down before hitting your mouth.

On the flip side, the extended mouthpiece allows for a much cooler and refreshing vapor but isn’t as hygienic as the flat one. Nonetheless, having the choice between the two is absolutely praiseworthy.

One of the reasons why MIQRO became one of the most sought after portable vaporizers on the market is its appealing looks.

DaVinci basically followed the same formula that they’d relied on while making the IQ — keep things simple and minimalist, but make sure that the design stays fresh and up to date.

Compared to its predecessor, the MIQRO is around 33% smaller but shares the same anodized aluminum shell which is drop-dead gorgeous!

Unlike IQ, the MIQRO also 15 LED lights on the front panel instead of 51, which makes precise temperature readouts a tad more difficult because the digits appear one by one.

Due to its anodized aluminum shell, the MIQRO feels incredibly sturdy and tough. Moreover, even the lighted side-mounted buttons feel super high-quality and are very easy to use.

The MIQRO isn’t just a smaller version of the IQ. With its all-new zirconium pearl, you’re able to reduce the oven capacity by an astounding 50%! You simply turn it counterclockwise and voila, you’re ready to enjoy your microdoses of weed.

Here are the size specifications of the DaVinci MIQRO:

Having a portable vaporizer that looks cool and modern is all fine and dandy, but none of that really matters if it’s not capable of producing a flavor-packed vapor. How does Miqro rate in that respect?

To access the MIQRO’s oven, you have to open the hinged lid located at the bottom of the device. MIQRO’s oven is almost twice as small as IQ’s with a capacity of around 0.25 grams.

Now, even though that may seem like a problem, it really isn’t, because MIQRO is very efficient in vaporizing the content within the oven and the flavor it delivers is unmatched among portable vaporizers.

The reason why the MIQRO is so good at what it does lies in the fact that its insides are made from the same ceramic zirconia used in the mouthpiece, pearl, and pathway.

Ceramic zirconia works wonders because it doesn’t compromise the taste and the overall vapor quality of the device. When compared to other portable vaporizers on the market, MIQRO produces the purest taste of them all. It’s that good.

Another thing that helps the MIQRO achieve peak performance is its ceramic zirconia pearl. Apart from reducing the oven capacity, it also helps reflect the heat, thus enabling an even heat distribution across the oven. Even distribution means less waste and more taste!

When it comes to temperature control, the MIQRO, once again, stands out in the crowd. This portable vaporizer offers its users three different temperature settings spanning from 300°F all the way to 430°F. These modes include the Precision Mode, Smart Paths, and Boost mode.

Experienced stoners know what they want and what suits them best. That’s exactly why the Precision mode came into existence. With it, users have the freedom to choose the exact temperature they want in 1° increments.

In order to select the Precision mode, all you have to do is press the main power button once, after you’ve turned the device on, and then set your preferred temperature by pressing the adjustment buttons.

Smart Paths are probably the greatest feature of the DaVinci MIQRO. These four temperature settings allow you to start and enjoy your vaping session with no additional hassle. You just press the power button five times to turn on the device, and it will immediately start up the Smart Paths mode.

Now, the Boost mode isn’t something that you’ll be frequently using, but it’s nice to know that it’s there. When you press and hold the power button, you ignite the powerful Boost mode which keeps on raising the temperature for as long as you keep the button pressed.

This setting is great when your session is coming to an end, and you need that extra heat to make the best of what’s left in the oven.

Of course, immediately after you let go of the power button, the MIQRO will start cooling itself down by going into the stand by mode. Then, if you don’t use it for two minutes while it’s in stand-by mode, it’ll automatically shut itself down.

When it comes to the MIQRO’s power source, things start falling apart a bit.

Because of the limited proportions of the device, it uses 18350 rechargeable batteries. Now, if you don’t purchase the Explorer’s pack which comes with a spare battery, you’ll find yourself in a pickle ever so often.

The MIQRO, when fully charged, offers around eight 5-minute vaping sessions (40 minutes total). For a portable device, that’s not too shabby, but it isn’t great either. Luckily, however, it takes no more than 90 minutes for the batteries to get fully charged, and that fact makes the whole situation easier to live with.

Performance-wise, the MIQRO is a force to be reckoned with. Honestly, the flavorful draws you’re able to get from this device are second to none in the realm of portable vaporizers.

After a fair bit of usage and low maintenance, the airflow will start becoming more restricted, but that’s not such a bad thing given that the draw on the MIQRO is a bit light from the get-go.

As we’ve mentioned earlier, when vaping on lower temperature settings, you get the best possible flavor and the densest vapor. Of course, as the temperature goes up, the taste becomes a bit harsh, but it never passes the threshold of unpleasantness.

At the end of the day, this device isn’t meant for long vaping sessions at home. Everything about it is absolutely ideal for quick draws when you’re lacking the time or when you’re on the go. Its oven capacity is reduced, it’s highly portable, and it takes no longer than 40 seconds to heat up to 370°F!

For us, this is the ultimate portable vaporizer on the market today, despite its expected flaws.

DaVinci MIQRO is an awesome vaporizer. Not only is it well-built and sturdy, but it looks awesome, produces decent vapor, and represents the essence of everyday carry.

Granted, it’s battery life isn’t the greatest, but given that it’s a vaporizer meant to be used on the go with microdoses, that shouldn’t be something to seriously complain about.

Therefore, whether you’re an experienced stoner who’s looking to add a nice portable vaporizer to your collection, or just a beginner weedhead, you can’t go wrong with the MIQRO. It’s simply that good!

haven't seen products as beautiful as these.