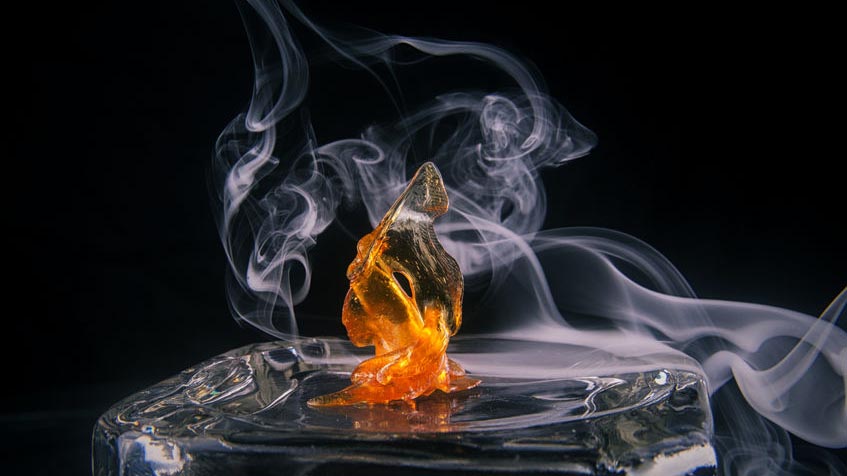 Dabbing weed has grown in popularity over the last fifteen years, partly due to cannabis extracts becoming widely available and partly because of the Internet.

I’ll explain why and how the Internet had a part in the expansion of dabbing weed a bit later in the article.

But for now, it is no secret that dabbing is the way to go if you want the strongest cannabis high.

Dabbing gives you a much stronger high than any other way of consumption due to the nature of cannabis extracts — the smoke coming from these extracts is much more potent when compared to dried flower.

So, in that spirit, let’s talk a bit about tolerance and the nature of increasing your own weed tolerance through dabbing.

It is a well known fact that your tolerance to substances that inebriate you have a tendency to grow and drop depending on how often you consume the substance.

Seeing how dabbing is one of the ways to consume cannabis extracts that contain high amounts of cannabinoid contents, it is natural that smoking these will vastly increase your tolerance.

But, is that a good thing?

In my personal opinion, no — never, unless your goal is to impress people with how much weed you can smoke.

Sure, dabbing once in a while when you are in the occasion might not increase your tolerance much.

However, many stoners have a tendency to get higher and higher for some reason. Those often have their own rigs and smoke on the daily.

Firstly, the increased tolerance will lead to further attempts at getting even higher and it becomes a never-ending loop of spending ridiculous amounts of cash on cannabis extracts.

Secondly, your tolerance will be so high at moments that getting high by simply smoking blunts and joints might become hardly achievable.

I had the unfortunate opportunity to have this experience.

After several weeks of non-stop dabbing and vaping on cannabis extracts, my friend from Cali and I couldn’t get high after smoking 3 blunts back-to-back on a regular day.

Sure, we got a bit buzzed…

But that was nowhere near how high we used to get before dabbing for a few weeks.

And there were no different factors that might influence our calls, we were still smoking the same weed as we used to smoke weeks ago…

After that experience, we decided to take it down a notch and ease up on the dabs.

Dabbing vs vaping: what’s the difference? 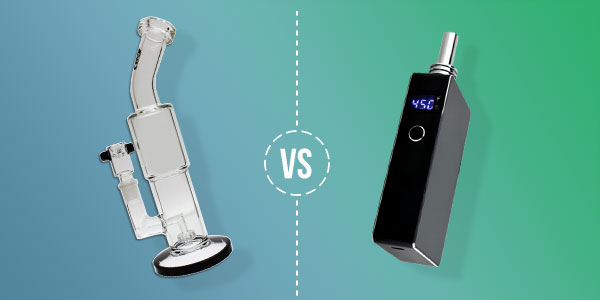 So, I mentioned that we both dabbed and vaped cannabis extracts.

These are two completely different ways of consuming cannabis, but they have rather similar effects.

Now, while both types of consumption rely on inhaling vaporized cannabis, the way users get there is a bit different.

Dabbing is done by heating up a nail with a blowtorch and placing a bit of cannabis extracts on the heated nail which evaporates the extracts.

The hot vapor is then inhaled through the rig and is usually extremely hot, which causes irritation in the lungs and throat.

The result of all this is an instant high, a terrible cough, chest pain and then numbness for the next 30 minutes or so.

Vaping, on the other hand, relies on technology a bit more, as it utilizes electricity in order to heat up the extracts or dried bud, which is then turned into low-temp vapor.

Vaporizers are usually much smaller in size as they usually come in pocket-size while dabbing rigs are basically modified bongs.

Vaporizers also utilize a lower temperature in order to vaporize the contents, while higher temperatures are needed for dabbing.

Vaporizers heat up cannabis material on a hot plate to release the vapor or smoke so that it can be inhaled.

Dab rigs utilize a hot nail that you manually heat up and it lets of heat over time, while vaporizers keep a constant temperature when activated.

Knowing these differences, let us get into how temperatures affect your high and see which temperature is best for which effect.

So, seeing how cannabis has over 100 active cannabinoids that affect your body and your high, maybe even in the slightest ways that you may not even feel, it makes sense that there are different temperatures at which these compounds ‘dissolve’ best.

Even the high after smoking a hash joint will have a different feel to it than when you consume hash through a vaporizer. 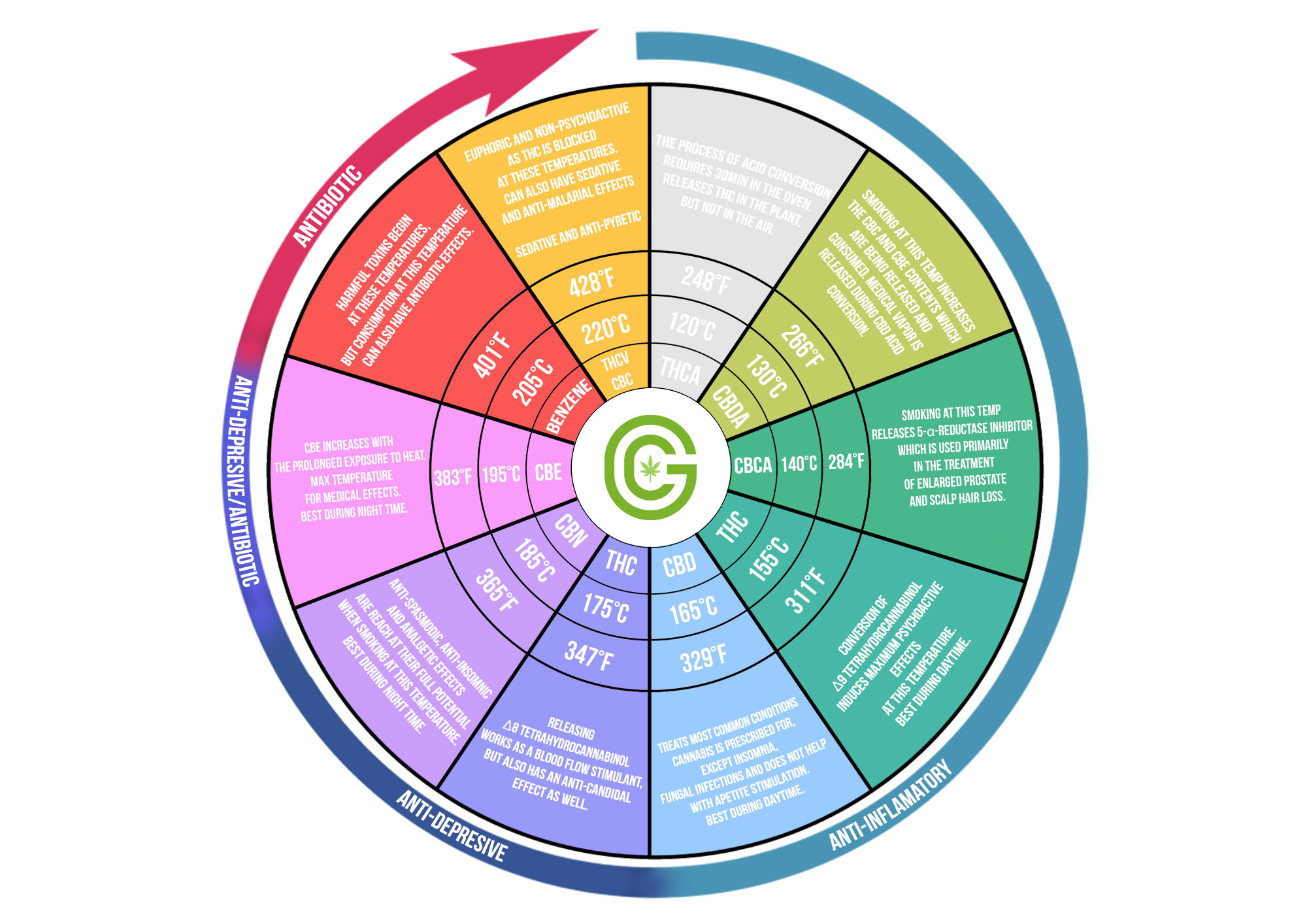 Most people who dab are used to using Tit-Nails, or titanium nails because they last very long.

Their durability is what the titanium nails are most known for, as these will almost never break or bend, or anything like that.

They can withstand incredible amounts of heat without losing it too fast, as titanium is rather good at retaining heat.

Quartz nails are made from Quartz crystal, and these are never recommended for first time users as they break very easily.

Similarly to Titanium nails, these can also be quickly heated up to high degrees and be ready to dab in no time.

However, given that these are easily breakable and don’t retain head for a long time, Quartz nails are never recommended for starters.

Once you’ve gotten a hang of dabbing, maybe try using a Quartz nail once or twice in your lifetime.

Lastly, ceramic nails are in my opinion the perfect balance of both, the beauty and the beast.

Ceramic nails are best in my opinion because I’ve had most pleasant experiences with them, and also least accidents.

When I say accidents, I mean stupid things happening when high people don’t think too much such as breaking rigs and grabbing nails while they’re hot as hell.

Ceramic nails will give you a better taste than the Ti-Nails, but worse taste than Quartz nails.

They are also more durable than Quartz nails, but less than the Ti-Nails.

Heat retention is a big factor when dabbing as you want as much time possible to take your dab without the nail cooling.

Ceramic nails will do just that, and if you are one of those that do things faster than they think, if you grab a ceramic nail by accident just after taking a rip — you won’t be as badly burned as if you grabbed a Ti-Nail.

Unfortunately, ceramic nails do take the longest to heat up of all three types, however if you aren’t dabbing in secret that shouldn’t really be a problem.

Electric nails, also known as e-nails are the ultimate dabbing experience you can have.

This device is powered by electricity and it is used to set the temperature of your nail, and keep it there until you decide different.

E-nails are more expensive than other nails, but give you absolute control over the environment while you are smoking.

This means that you won’t have to worry much about the potential hazardous issues with the rig or the burner.

However, using an e-nail will limit your consumption to places with electricity — so no dabbing in the forest with this bad boy.

Lastly, we’ve come to the guide itself.

If you’ve never dabbed before in your life you will need the following:

Step 1: Put the extract firmly on the nail.

By doing so you will make sure that the extract doesn’t fall off while moving the dabber around, thus leading to losing the extract in the carpet or somewhere else on the ground.

It will also help you get all of the extract on the right places on the nail. Make sure you don’t put too much as you don’t want to waste good extracts into the air.

Step 2: Heat up the nail with the torch.

If you have your torch at hand, place the bong (or now it’s actually a dabbing rig) and heat up the nail.

Depending on the type of the nail you’ll need about half a minute to heat up the nail. If it turns red, wait for about 20-40 seconds for the nail to cool down, as the best flavors are release at lower temperatures.

Step 3: Place the extract in the nail and move around while inhaling

Once you’ve reached your desired temperature, put the dabber with the extract in the nail and move it around.

You will see smoke and vapor appear, and once the whole extract is gone cover the nail with your dome on the dabber.

This will trap the smoke and vapor and give you the best possible hit.

If you have friends that dabbed before I strongly suggest you do it with them as they will know how to help you with everything you need.

Expect a very strong high and a powerful hit to the lungs like you’ve never felt before.

Most importantly, enjoy dabbing, but not too much as it will raise your tolerance faster than anything else!