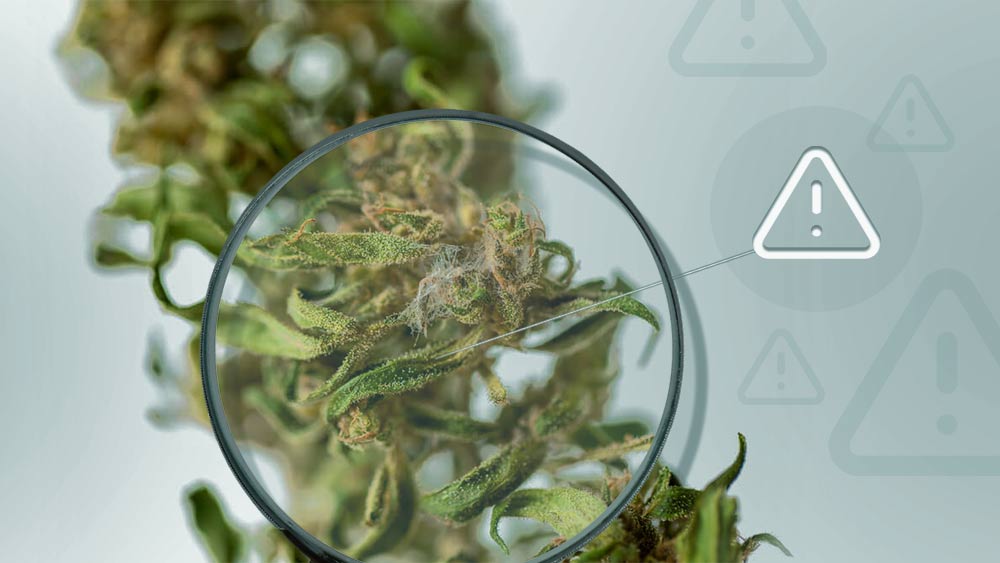 Molds are a vast subcategory of fungus, distinctly different from yeasts. Molds reproduce by producing asexual spores, and these microscoping spores enter our bodies all the time.

Miniscule amounts of most types of mold spores are safe for humans, as the immune system fights them off. Mold generally thrives in moist and unventilated conditions, and dry climates are much less affected in comparison to humid environments.

On weed, mold typically develops when moisture is too high during the drying process, but it can also be formed during other stages of cultivation. The so-called “moisture lock” happens when we store weed which hasn’t properly dried in an airtight container, and by doing so creating a perfect breeding ground for mold to develop.

Some types of mold possess naturally-occurring toxins (mycotoxins), and these molds are most detrimental for human health.

What happens if you smoke moldy weed

In regards to weed, molds feed on the cannabis plant, and a moldy weed plant is considered diseased. Mold spores cannot be incinerated by smoking or vaping, and mold poses the biggest threat for people with a compromised immune system.

People who are allergic to penicillin and other mold-derived antibiotics can also experience an allergic reaction.

Mold is the number one health hazard for cannabis users, and in the worst-case scenario a user can develop a lung infection, requiring immediate hospitalization.

If left untreated, an infection caused by mold can result in fungus balls growing in the lungs (aspergillomas), which is a condition that requires an urgent surgical procedure.

The best way to figure out if your weed is infected by mold is through visual inspection.

Depending on the exact type of mold, it can have many different appearances.

Powdery mildew resembles confectionary sugar or sawdust, and people tend to mistake this kind of mold for dusted kief, or even that the weed was laced.

Other types of mold create a sludge-like or slime-like matter on weed, which can be brownish, yellowish, or white/grey.

Mold that looks like dark spots (black or dark green) can also infect both buds and leaves.

Some people also have issues differentiating trichomes from mold. Trichomes are tiny transparent mushroom-like outgrowths on the surface of weed, where both cannabinoids and terpenes are located.

The best way to differentiate trichomes from mold is that trichomes appear very crystalline in structure, while mold has a web-like or cotton candy-like structure.

Weed’s trichome nodules are also very singular (with distinct spaces between them), while mold is completely interconnected.

If mold has recently developed, it can be very difficult to spot it with a naked eye.

Digital microscopes are a great way to circumvent the shortcomings of your eye, and you can find very affordable options (30$~100$) on Amazon.

Another way to detect mold is by using a blacklight (UV-A). Mold has a recognizable green hue when it’s illuminated by a black light.

Another method for determining if your weed is moldy is through the sense of smell.

Depending on the type, the smell of mold can be like urine, sweat, hay, cat-like, musty or stuffy.

For maximal certainty, it’s best to combine both visual and odor detection techniques together.

When growing weed, there are numerous things you should always do, and several you want to avoid. First of all, don’t use fruit peels as fertilizer, as they can introduce mold spores.

For additional security, try growing strains that are high in anti-fungal terpenes such as limonene, eucalyptol and trans-nerolidol. The presence of these terpenes makes cannabis plants increasingly resistant to mold.

If you’re growing in a closed environment, use fans to keep the level of fresh air optimal.

For outdoor growers, there are four aspects to consider:

You should regularly save cuttings in case mold infects your crop.

Also, make sure that you’ve carefully trimmed your buds before you start the drying process, as they retain less moisture. Desiccants are also a fine option when you’re packing your cannabis.

If mold happens, make sure to dispose of the infected plants immediately, in order to prevent further contamination. You should apply anti-mold agents to sanitize your grow room.

There were several big recalls because of mold in 2019, most notably in Michigan (48 pounds), Ontario (55 pounds), and Colorado (an undisclosed quantity).

If you’re legally acquiring cannabis, make sure to check the local media for recent recalls, even though it may seem somewhat dorky.

If you’re a frequent user always try to remain vigilant because moldy weed is nothing to joke around with, and it’s a smart idea to get your weed from Canada local pot shop. 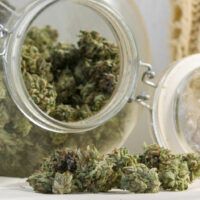 What Is the Best Way to Store Weed so It Doesn’t Dry Out?

Maybe the safest is cannabis oil.

I’ve bathed and I even tested with UVC regularly before cutting. I just bathed but I still see the mildew on the drying buds. Thoughts?