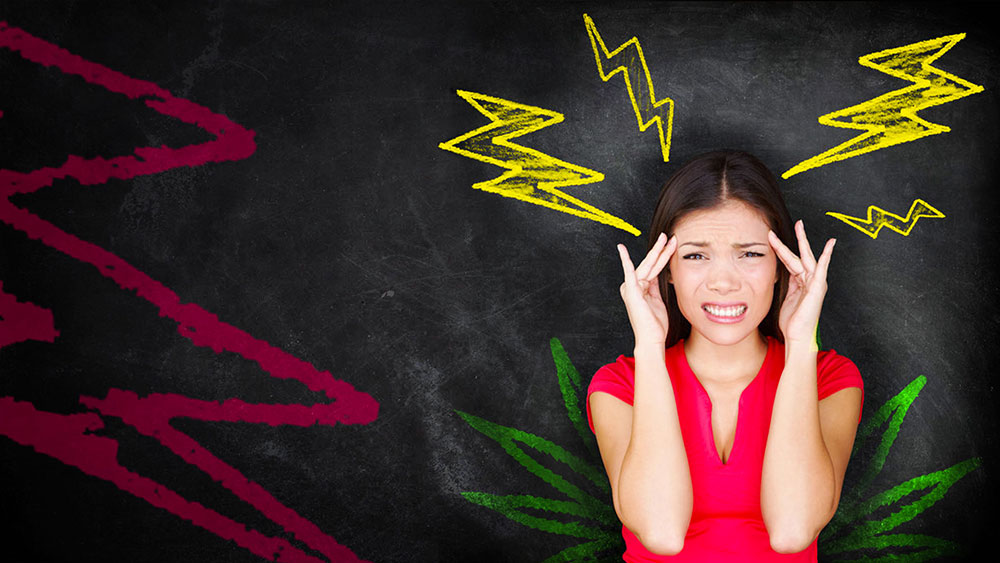 In a world where 12% of people suffers from chronic migraines (1), pain medication is a welcome commodity. Even more so if the medication in question poses no serious long-term side effects.

The most common treatment for migraine pain usually revolves around painkillers such as paracetamol and ibuprofen.

A typical side-effect of taking these medications regularly is something called “a medication-overuse headache”. This secondary headache happens because people often go over the recommended dose in their efforts to get rid of the pain.

As of recently, migraine sufferers started exploring cannabis. I wanted to see if there are studies that explore the relationship between cannabis and migraines in greater detail and what are considered the best strains for relieving migraine pain.

Migraines are frequent headaches that occur at least 15 times per month. They are often confused with normal (tension) headaches.

Normal headache is an unpleasant feeling of pressure on the forehead, scalp or the back of the neck. The pain can range from mild to severe, lasts from a couple of hours to a few days, and is symmetrical in nature. It is usually caused by stress and anxiety.

When you have a migraine, you feel pain in one-half of your head, behind one eye, ear or in the temples. Many develop sensitivity to light and even temporary vision loss in extreme cases.

As much as 25% of patients experience a visual disturbance. They describe this as seeing geometric patterns and blurred light in their peripheral vision.

Migraines can last from 4 to 72 hours. The latter is exhausting, to say the least.

We still don’t know for certain what causes migraines but, as is usually the case when we are clueless, genetic and environmental factors are to blame.

Also, the statistics point out that women are more likely to suffer from migraines than men, which makes scientists suspect that hormones may play a role.

Normal headache is a symmetrical pressure felt on the forehead, scalp or the back of the neck. Migraine is a painful feeling in one-half of the head, usually followed by sensitivity to light, pain behind one eye, ear or in the temples.

The relationship between cannabis and migraines is a growing point of interest for many clinicians.

One of the first studies on this topic was published back in 1987 in “Headache: The Journal of Head and Face Pain”. In it, the researchers set about to discover why one group’s decreased cannabis consumption resulted in an increased frequency of chronic migraines.

Their conclusion was simple—marijuana was probably somehow “masking” the migraine pain, which stopped after subjects quit using cannabis. (2)

A 2016 study from the University of Colorado did an experiment on 121 adults who were diagnosed with migraine headaches. Participants from this study were told to use migraine medications in combination with medical marijuana from 2010 to 2014, with regular check-ups.

The average number of migraine episodes dropped in subjects who used medical cannabis. (2)

Around 40% of patients said that cannabis had positive effects on their levels of pain and that it aided in preventing migraines.

Most of the remaining patients said that their headaches were not of the same intensity as before they started with their medical marijuana regiment.

A total of 12% of participants reported no change whatsoever with marijuana therapy and only 2% reported an increase in headache frequency.

A 2004 study from Dr. Ethan Russo further explored the mechanism of action of marijuana on migraines. Dr. Russo did not manage to find a definitive answer to this question, but he did notice something interesting:

85% of patients involved in this clinical trial experienced a reduction in migraine frequency. (3)

Several studies have shown that cannabis can reduce migraine episode frequency, as well as the intensity of the pain.

Indica vs sativa for migraines?

Back in 1892, while marijuana was still a recognized migraine medicine, William Osler, a Canadian physician and one of the founding professors of Johns Hopkins University, once stated:

“Cannabis indica is probably the most satisfactory remedy for migraines.”

Science has advanced since the 19th century and we are now very close to completely understanding the biochemistry of cannabis.

Strains rich in myrcene and THC produce the “couch-lock” effect, which is best described as a sedative, narcotic high. (5)

These strains will, after a quick head buzz, put you to deep and relaxing sleep.

Sativa dominant marijuana strains usually have terpenes that produce uplifting effects (like limonene). These strains are good for treating depression, lack of energy and sluggishness.

Most importantly, there are both indica and sativa strains with high CBD levels which bring the best of both worlds: Low to no intoxication and a plethora of pain relief.

So, when choosing between indica and sativa think more in the terms of cannabinoids and terpenes, and not so much about the particular subspecies of cannabis as most of the strains in use today are hybrids.

For migraines, the preferred strain is usually the one with upwards of 15% THC and a lot of myrcene. However, the best effects will be produced only when you carefully plan the dosage, which takes some experimentation.

Can cannabis cause migraines?

According to the studies mentioned above, around 2% of patients reported an increase in migraine frequency after using marijuana.

Most patients report positive outcomes, like having fewer migraines or not at all.

Consuming large amounts of marijuana before sleep can produce some undesirable effects the next morning. Nobody wants to wake up feeling groggy and sleepy.

The key to this is getting the dosage right — take it easy the first few times around.

With every new strain you try, start with just a few puffs and increase the dosage until you get it right. That way, you are minimizing the unwanted side-effects by making sure that you get just enough of cannabinoids to produce pain relief.

Marijuana affects people differently, so you’ll have to do a little testing of your own to find which strain would be the most effective for your migraine. There are hundreds of different strains out there and while finding the right one may take time. To help you out, I compiled a list of 10 strains to help you start your migraine-free journey.

This classic indica is high in THC, so only a few puffs should be enough to relieve you from your pain. If you try this strain you should also expect a heavy “couch-lock” effect. It will even make you want to take a nap immediately, so use it wisely and at times where you don’t have to be active.

Blue Dream provides a calming and euphoric feeling. It’s perfect during the day because it will not put you down to sleep. Blue Dream has a very pleasant fruity-sweet flavor. Also, it’s good for preventing nausea, a common companion to migraines.

Chocolope is actually a sativa-dominant strain with high THC content but it’s very effective when it comes to reducing migraine pain. It’s perfect for work since it’s very energizing. Take smaller doses at first, especially if you are a beginner, as it’s very potent.

White Widow is a very popular strain from Amsterdam and is very well known for its painkilling properties. It will make you uplifted and ready to tackle the day ahead. It’s perfect for everyday use since it enables you to maintain a sense of awareness. White Widow is also great for easing muscle tension at the back of your neck.

This one is a great strain for fighting stress-caused migraines. First, it brings forth a wave of euphoria while taking away the pain. Since it’s very potent, beginners should take it slow and expect a heavy couch-lock. You are best off smoking OG Kush at night or during the weekend.

Granddaddy Purple is a great choice for your nighttime migraines since it will keep you relaxed on the spot. It will sedate your entire body and will help you float your mind off from everyday worries, which makes it great for lowering overall stress levels.

This a very strong strain made from crossing two popular cannabis painkillers: OG Kush and Granddaddy Purple. And that’s what makes God’s Gift perfect for recovering from the toughest of migraines. It’s best used after a hard day since it will put you to bed after just a few hits.

Named after the famous scientist, SHK has so far been very effective in treating migraine pain. With its 1:1 ratio of THC to CBD, it offers health benefits from both main cannabinoids. CBD provides energy and non-psychoactive properties, while THC kicks the pain away to where it belongs. All in all, a great strain for going through the day.

Canna-Tsu is a strain high in both THC and CBD, helping you relax while keeping your mind clear. This strain reduces inflammation, which is one of the most common symptoms of migraines. It’s also one of the favorites among patients suffering from all sorts of pain.

One of the most complex hybrid strains, Holy Ghost provides a full cannabis experience while relieving the most persistent of migraine pains. What you can expect with this strain is getting relaxed but not stoned, energized and talkative and yet clear-minded. As a beginner, take small steps at first since it’s one of the strongest strains in the world.

Alternative treatment worth checking out

Migraines can be awfully annoying.

If conventional drugs don’t work for you, maybe you’ll find the relief you need with marijuana. If you are worried about smoke irritating your lungs, you can make edibles, such as brownies and cannabutter. Even though edibles take longer to prepare and digest, the effects are stronger and they last much longer than other conventional consumption methods. 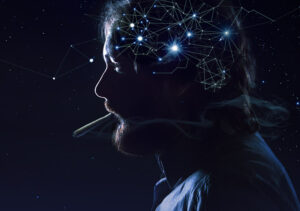 The real cause of migraines is still unknown. About 40% of patients reported positive effects of marijuana on their headache problems. Marijuana also helped in preventing and stopping migraines.

I’m looking for edibles for migraine and tension headaches. I am not looking for anything to smoke. Thank you

Hey Donald,Canada didn't legalize edibles, but they announced that they will do so by October 2019. What you can do as of October 17th is grow your own plants, which you can harvest and make cannabis butter. You can later use that butter for making edibles on your own, nobody can stop you from infusing your food with your weed.

I have a question My wife suffers from cronic migraines. She just reacently went through a brain seugrey for a aneurism. With a scope through her groin. It was called a coiling on 01/25/19. She has had a migraine every day sence it is now 03/18/19 her doctor's want her to seek out a pain clinic. We were wondering if a CBD oil with no THC in it could help her find some relief. And if so what would be the best strains? I read the articles above. An would like to move forward with trying (CBD).