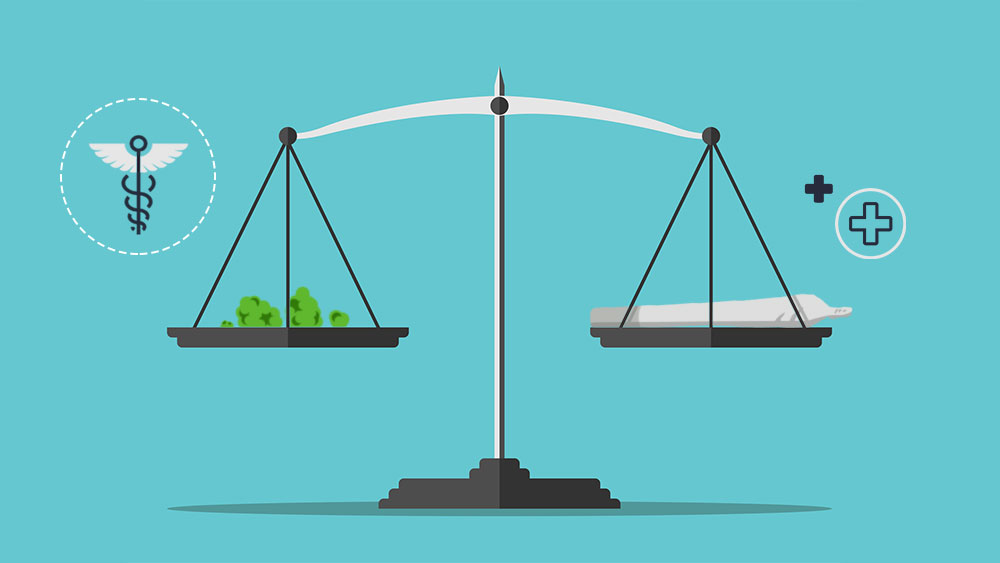 Grams, ounces, “eights” and “quarters” are terms for weed measurements that can be extremely confusing for both beginner and more experienced cannabis users.

Why are they confusing? Because someone decided it would be a lot of fun to take turns using the metric and the imperial system when measuring weed. So, if you go to a dispensary to buy a small amount of weed, you’ll likely ask for a gram, while many other amounts are measured in ounces. Whaaat?

Yes, and there’s more of that confusing stuff.

Of course, we want you to understand these important terms easily. So, we put together a guide that breaks down imperial and metric weed measurements, including a few visuals that will help you have a clear picture of these amounts and how much space they occupy.

(Important: The following terminology refers only to flower, not edibles and concentrates.)

You’ll hear people say “an eighth”, or “a half quarter” and wonder how much weed that is exactly.

An eighth of weed refers to an eighth of an ounce. This is the amount of weed most frequently purchased by people who use cannabis moderately.

Converted to the metric system, an eighth of an ounce is just a little over 3.5 grams.

An eighth of weed is about the size of a walnut. Depending on your appetite, you can roll up to 3 blunts, 3 to 4 large joints, or approximately 7 half-gram joints.

Fun fact: An eighth of weed is often dubbed a “slice”, or a “cut”. This is because pizzas are usually divided into 8 slices.

The name says it all: It’s one half of the eight of an ounce. Visually, it’s about the size of a bean. Definitely a magic bean to some of us.

Although half-eights are rarely sold on the market, it’s worth mentioning this term because you can still hear it from time to time.

Half-eighth of weed is around 1.7-1.8 grams – enough for several medium joints.

Slang names like “Q”, “quad,” or just a “quarter” refer to a quarter of an ounce.

Intermediate users generally like to buy a “quarter” which can last for days or even weeks, depending on one’s frequency of use.

With a quarter of weed you can roll about six or seven blunts, or a handful of joints.

A quarter of weed is about the size of an apple.

Following the same logic, a half of weed refers to a half of an ounce of weed.

With this amount the price really starts to break, although it will also depend on the quality of the buds in question.

A half of weed is about the size of an orange. If you want to make some edibles, this is the amount usually required in recipes for making cannabutter, which is at the core of all canna-edibles.

Regular users like to buy a half of an ounce so they don’t have to go every now and then to refill their stash.

A half of weed is perfect for parties, road trips, and other activities of that nature.

You can often hear stoners abbreviate an ounce to just an “O”. An ounce is also referred to as “zip”.

Now, this is a pretty large amount of weed, and very few places actually sell in this quantity.

South of the border, most dispensaries in the US (where cannabis is legal for recreational use) offer ounce deals.

Buying weed in whole ounces is the most cost-effective way to buy weed for daily, high-volume users.

What does an ounce of weed look like? It’s about the size of a coconut.

Before we continue with larger amounts and then switch back to smaller ones measured in grams, let’s take a look at this approximate visual representation of weed measurements.

In the cannabis community it’s known as “QP”, and the name says it all.

“Half-pack” and “half-pounder” are the main slang terms for a half-pound of weed.

A half-pound totals 226.8 grams, or 8 ounces of dried cannabis. In the world of visuals, it could take up as much space as half of a watermelon.

One pound (1 lbs) is 448 grams, or sixteen ounces. And that’s quite a lot. Though it’s not as heavy as a watermelon, it takes that much space. Imagine such bulk of weed!

To be honest with you, I don’t think one person (or an entire group of people) could consume that much weed in any reasonable amount of time, so I’d consider this a dispensary-level volume of cannabis.

Keep in mind that the legal limit for possession and sharing in Canada is 30 grams. 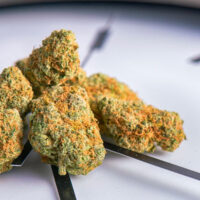 One Gram of Weed

If you’re looking to buy small quantities of weed, it’s best to go for a gram, especially if you haven’t tried that strain before.

A gram of weed is called a “dime bag” on the street because it used to cost about $10. Also, it’s the smallest amount of weed you can purchase (unless you’re getting pre-rolls, which can have even smaller amounts).

Some dispensaries don’t carry such small amounts anymore, but it should still be relatively easy to find.

It’s about the size of a hazelnut. Experienced users who have developed a tolerance to THC usually put an entire gram in one joint.

If you are smoking alone, you can split it in half and roll two smaller joints.

If you’re using a pipe, this amount will be enough for two or three bowls.

If you’re new to cannabis, this will undoubtedly be too much for you, especially if it’s a high-THC indica.

Also called a dub sack, or just dub, this term used to stand for weed that cost about $20 and weighted two grams.

It’s important to note that a dime bag and a dub sack are sometimes used interchangeably in different regions, and these amounts don’t necessarily have to weigh exactly one or two grams.

Most of the Canadian LP’s sell their products in five-gram and ten-gram packages.

Five grams of weed is 0.1763 ounces. This amount of weed looks about the size of an egg, and it’s a perfect amount for a few weeks of self-medication.

Five grams would be enough for four to five blunts, or five to ten joints, depending on their size.

In some dispensaries you can also sometimes hear the term a “five-gram eighth”. We mentioned before an eighth is 3.5 grams, so what does it have to do with five grams?

This term refers to the price—a customer who buys a five-gram eighth will get five grams for the price of an eight (3.5 g), which is a pretty sweet deal, if you ask me.

Depending on the medical condition, most patients would buy a 10-gram jar and consume it in the following few weeks.

Ten grams is more than enough for rolling a bunch of joints for you and your friends, but it’s probably a bit too much for any crew to consume in one sitting.

A Kilogram of Weed

A kilo of weed is an enormous amount of marijuana. Let’s say, the size of two watermelons.

I’ve seen that much pot only in one of the many coffee shops I visited in Amsterdam.

One kilogram equals a thousand grams, or 2.2046 pounds.

Grams to Ounces / Ounces to Grams

All these different terms and measurement systems can be really confusing, but it’s actually quite simple to do the math.

Here’s a formula to help you figure out how many grams there are in an ounce.

One gram is 0.0352 ounces, so whatever number of grams you want to convert into ounces, just multiply it by that number.

One ounce equals 28 grams; therefore, by multiplying your ounces with 28, you’ll get the exact quantity in grams.

And to make it even easier, here’s a chart so you don’t have to calculate:

Now that you know what all these weed measurements mean, you can better understand the laws on how much cannabis you can have with you in each legal state.

And just one final word on edibles and concentrates. They are measured differently than flower and the most important thing to consider in these products is the amount of THC. These amounts are stated on the packaging labels and usually show the total amount of the cannabinoid in the packaging. So, you’d need to divide the total amount with the number of items/serving sizes inside.