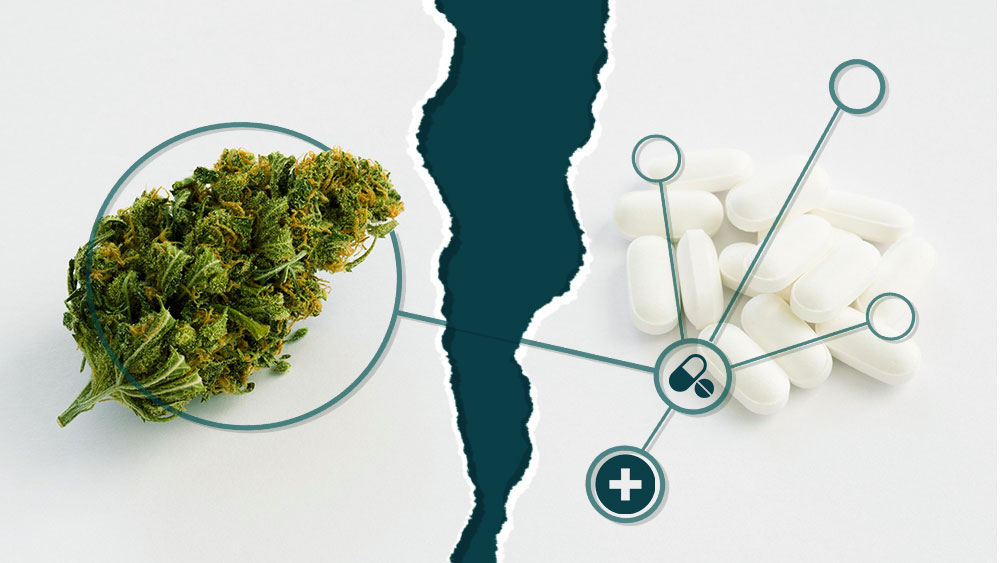 Did you know that a seemingly harmless grapefruit can negatively interact with certain anti-anxiety medications?

When you think about this (and other similar examples) you realize there’s a reason why people are concerned about mixing cannabis with pharmaceuticals.

Unfortunately, because of the restrictive laws and general lack of research on the subject, we really don’t know a lot when it comes to cannabis’ interactions with other drugs. Hopefully, this will change in the years to come.

Until then, we have to rely on sporadic studies and personal accounts of individuals willing to share their experiences.

Freebie: Download a free dosage guide that will show you the exact step-by-step process Dr. Dustin Sulak used to successfully treat more than 18,000 patients with cannabis.

How can two substances interact with each other?

There are 3 main types of chemical interactions between two medications (or substances):

We lack research on using cannabis with medications

As previously mentioned, there’s basically no research on the interaction between drugs and cannabis, but the anecdotal evidence and patient testimonies tell us that mixing weed with medications usually doesn’t have any negative impact, or that it causes a mild interaction.

For example, a few years ago I had a wisdom tooth infection and because of that, I had to take some antibiotics.

My dentist told me not to drink any alcohol while I was taking them but added that I was free to smoke weed as much as I want since cannabis has no interactions with this type of medication.

Sedatives or tranquilizers are a class of medications that induce sedation by reducing excitement and irritability. Sedation is a pretty broad term, and therefore cannabis can interact in different ways with different sedatives.

In general, it seems that combining cannabis and sedatives results in an additive effect.

This basically means that there shouldn’t be any side effects when consuming these substances together.

The effects of cannabis and sedatives will just add up, as the sedatives, the cannabinoid THC and some terpenes all have sedative properties.

Though this combination is not dangerous (as for example mixing alcohol and sedatives), you can expect additional drowsiness and sedation from mixing these two.

Newer versions of antidepressant drugs have been improved not to carry such high risks of contraindications and interactions with other medications and substances.

Unfortunately, the research for this relationship is also very scarce. There are only a few reported cases of adverse effects caused by mixing cannabis and antidepressant drugs. (1)

However, until we know more about this type of interaction, you should probably steer clear of cannabis while you’re using antidepressants, just to be safe.

The relationship between psychotic disorders and cannabis is very complex. The fierce debate whether cannabis triggers mental disorders such as schizophrenia has been raging for decades.

Although medical cannabis shows promise in treating conditions such as PTSD, anxiety and depression, patients with psychotic disorders are recommended to stay away from pot. 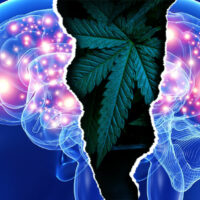 Marijuana and Schizophrenia: Triggering or Treating?

But what about antipsychotic medications?

As it turns out, cannabis interacts with all substances that get broken down by P450 enzymes in the liver, and those enzymes are also found in certain antipsychotic medications.

Since cannabis (more precisely CBD) interacts with those enzymes, when it gets into the system it prevents the antipsychotic drugs from being broken down.

In this case, antipsychotic medication can’t get metabolized and thus stops working, which is definitely a bad thing.

Tetrahydrocannabinol binds to both CB1 and CB2 receptors. Activating these receptors sometimes triggers a stress response which makes us use more oxygen while reducing blood flow in coronary arteries.

Although high THC strains elevate blood pressure and can even induce heart palpitations (irregular heartbeats) in novice users, after a brief initial period, blood pressure starts dropping back to normal.

When it comes to the interaction of cannabis and blood pressure medications, once again there’s no scientific evidence of any adverse effects.

However, I strongly advise you against mixing these two, just because there’s not enough research and because using blood pressure medications alone carries certain risks. 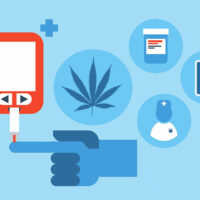 Studies dealing with combining drugs that regulate blood sugar levels (like insulin) and cannabis sadly haven’t been published yet.

CBD interactions with other drugs

CBD is a non-intoxicating cannabis compound with fewer side effects than its psychoactive chemical relative THC.

Medicating with high CBD strains or CBD oil doesn’t induce that “high effect”, which is why numerous medical users decide to go with this cannabinoid.

However, CBD should be avoided if you are taking drugs that are broken down by the cytochrome P450 enzyme system.

CBD Oil Review has a list of medications that should be avoided, so check with your doctor first before taking them with CBD.

Even though there’s no scientific consensus on any of the subtopics we’ve covered in this article, it seems that cannabis functions well with some medications while interfering with other drugs.

Until science picks up the pace, I suggest to proceed with caution and if you do decide to mix cannabis with pharmaceuticals, consult with your doctor and closely monitor the effects.