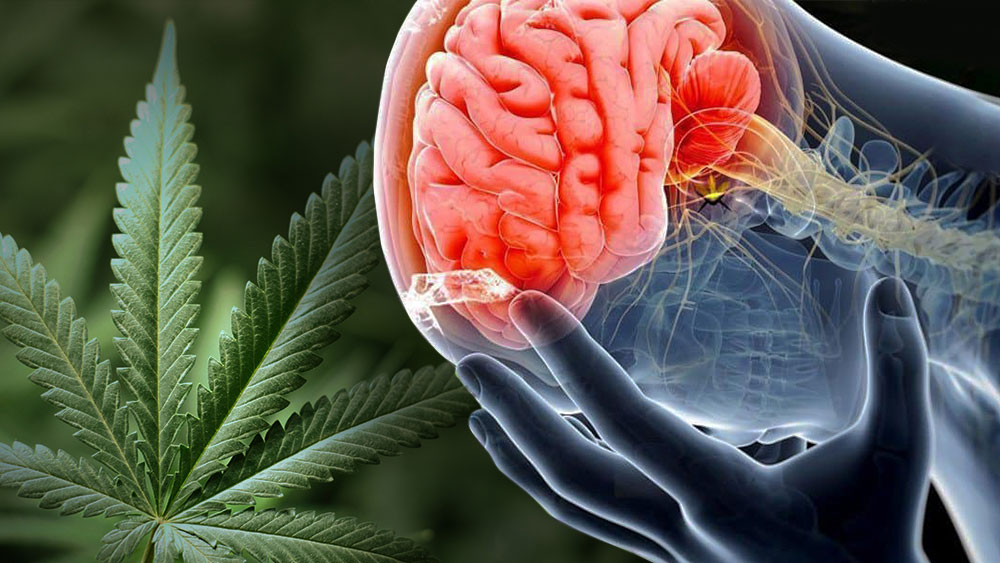 Between 2 and 4 million concussions occur every year in North America.

Depending on the severity of the injury, concussion can be fatal. The death risk rate for those with a mild concussion is 2%.

This percentage goes up with the severity of the hit—it gets up to 30% for those with a more severe injury.

That being said, there isn’t much you can do after you suffer a concussion: Usual directions are to get a lot of rest, sleep and take lots of fluids. The only medication your physician is likely to prescribe is something to soothe the headache.

If you’re a cannabis user, however, there’s probably one more question on your mind:

Is smoking weed with a concussion safe or not?

Well, as it turns out, cannabis is good at reducing brain swelling and helping your body recover from a head injury.

What is a concussion?

In layman terms, concussion is basically a bruise on the brain.

A more thorough definition is that a concussion is a head injury caused by a blow to the skull. The blow produces a swelling on the brain and temporarily stops certain brain functions.

Concussion is the most common traumatic brain injury and can be also caused by a blow to the body that makes the brain bounce off the skull walls.

The brain floats in the skull and is surrounded by spinal fluid which acts as a buffer. When we suffer a hard blow, the inertia slams the brain on the skull wall—this has the potential to cause physical damage and abnormal chemical reactions in the brain, which can lead to a traumatic brain injury.

Most common causes of concussions in adults are car accidents, sports injuries and cycling accidents.

Symptoms of a concussion

Here are some common concussion symptoms:

Often times, the smartest choice is to get checked out by a medical professional immediately after suffering a hard blow to the head.

Once a doctor gives a green light that there is no long-term risk related to the injury, it’s time for rest.

All the injured brain needs to recover is to take some time off from physical and cognitive exertion.

This includes abstaining from studying, working hard, socializing, exposure to bright light and loud noises and staying away from sports and workouts, at least for some time.

Doctors even recommend not playing video games, texting and reading.

As I’ve said, there is no specific medication for a concussion, but doctors can prescribe painkillers for treating headaches or something to help with the sleep— sleeping problems are quite common after this type of injury.

But let’s cut to the chase.

Can cannabis help the brain heal faster after a concussion?

There’s a lot of scientific and anecdotal evidence that marijuana can help the brain heal faster and protect it from neural damage.

I was interested in finding the truth so I set about to find some concussion-related cannabis studies.

There aren’t many of them, but combined with what we previously know on the health benefits of cannabis, we can make an objective conclusion.

CBD is known by now as an anti-inflammatory agent and there are a few studies that prove that cannabis reduces all sorts of swelling and inflammation in our system, including brain inflammation.

According to a 2015 study published in the scientific journal Cerebral Cortex, the endocannabinoid system plays a very important role when it comes to our brain recovering from the injury. (1)

In fact, researchers found that cannabinoids (particularly CBD) can even protect our cells against the damage before and after the injury.

How Does CBD Actually Work?

Cannabis is famous for its positive effects on chronic pain, sleep, appetite and even depression, so it’s no wonder why people turn to it immediately after suffering a concussion.

Unfortunately, only the state of Illinois has approved the use of medical marijuana for treating post-concussion syndrome symptoms.

Most states and provinces in Canada have approved medical cannabis for some of these symptoms separately, which may be a good way around this.

Even the US government admits it: Cannabinoids have neuroprotective properties and the ability to limit the neurological damage and consequences of strokes and head injuries (such as a concussion).

That is the reason why cannabinoids have found their application in the treatment of neurodegenerative diseases like Parkinson’s and Alzheimer’s.

CBD has especially shown neuroprotective properties, but one study found evidence that THC may also protect our brain, if administered before the injury.

In a 2014 study published by the Harbor-UCLA Medical Center, researchers found that concussion patients who had THC in their blood at the time when the accident occurred were less likely to die from a brain injury. (2)

If you’re in Canada, be sure to use Strainblazer, our strain finder tool to help you refine your search.

Strains for headaches and pain

Certain sativa and indica strains, as well as hybrids, have painkilling properties, which is very beneficial for overcoming headaches and migraines.

These strains can help you get rid of headaches, as well as some other accompanying symptoms.

This could very well be the strain to help you with all concussion symptoms, as it reportedly helps soothe headaches, pain, stress, and depression.

Harlequin is also great at reducing inflammation. It contains high levels of CBD which diminishes the psychoactive effects of THC and stops marijuana-induced paranoia.

A pure classic, OG Kush is one of the most popular strains in the world so you won’t have trouble finding it in your area. It crushes stress, kills pain and swipes away the migraines. With THC levels around 20%, OG Kush will put you to sleep as it starts to wear off.

Blue Dream is a perfect strain for daytime rest since it does not provide heavy sedation. This high THC strain is great for treating pain and nausea. Blue Dream is actually perfect for balancing slight euphoria and body relaxation.

After suffering a concussion you’ll need lots of naps.

After a medical observation, your doctor will most probably recommend home rest — no work, no heavy physical activities, no phones, and computers. Just a lot of rest and sleep.

You’ll never be wrong for choosing indica strains since they tend to be good for treating insomnia.

Here are a few strains to help you get into a deep slumber.

This is a very potent strain, so novice users should be very cautious with it. Keep the dosage low until you get used to it. It releases the body tension leading to a good night’s sleep.

It’s great for severe pain as well as mild headaches.

Cookie Jar is perfect for those who have suffered a head injury since it provides a relief from pain helps get your sleep under control. Many patients have been using it for treating insomnia with success.

After suffering a concussion, you’ll probably feel more tired than ever. So, to get you back on track, here are a few strains for daytime fatigue to give you a little energy boost.

This strain is known as a happy strain. Jillybean has a sweet and fruity aroma, produces a slight head buzz, but does not weigh down the body.

With a nice body buzz, Pineapple Express is used for treating a number of medical conditions such as chronic depression, stress, and fatigue.It also reduces mild pains and headaches while it fills you with all the energy you need.

Green Crack is a potent sativa that can really increase your high-time productivity, even though the name suggests otherwise.

The vigor from this strain can possibly be a bit too much for the gentler users, so make sure you consume it in a non-threatening environment for the most pleasant effect. On the other hand, if you take your weed as strong as possible, you’ll have no problem with it pretty much anywhere.

Strains for depression, anxiety and stress

Suffering a head injury like a concussion can be really stressful, so here are a few strains to help you overcome feelings of loss and despair and recover faster.

Need a laugh in these hard times? No problem, Laughing Buddha is perfect for laughs and giggles. However, this is a really potent strain, so those who are not really experienced should take it easy.

An excellent strain for depression, stress, fatigue, nausea, and headaches that makes you feel happy and relaxed.

Jack Herer is simply known as the nature’s antidepressant. It uplifts the mood, creativity, and boosts focus. Named after a famous activist, Jack Herer gives you a full body bliss and a clear head, perfect for battling the post-injury depression.