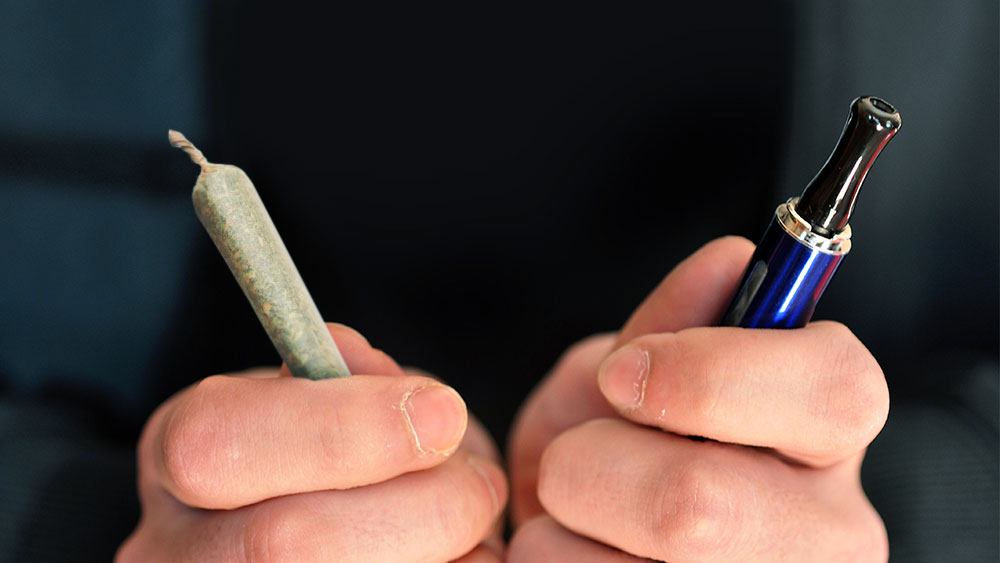 Joint-rolling is an artform I could never quite master. My spliffs often resemble pale, broken pinky fingers.

And when it came time to smoking them, I’d often have to go out into the winter cold, spraying Febreeze all over my body before coming back inside. But one night, playing board games at my friend’s house while his wife and kids were out of town, everything changed.

My friend took a small stick out of his pocket and took a quick pull. No lighter, no smell. It was so discreet, I almost didn’t notice until he offered it over to me. It was between the size of a cigarette and a ball-point pen and had a small, clear, inch-long chamber filled with THC concentrate.

I put my lips around the tip and breathed in. No button pressing needed. No thick smoke entered my lungs, allowing me to take a longer pull than usual.

As I breathed it out, it dawned on me that was the first time I’d ever inhaled cannabis indoors. None of my friends would be comfortable with the lingering trace of cannabis smoke inside their homes – especially with children living there.

I asked him how often he had to refill the cartridge. With daily use, it was about once a month.

I bought mine the next day.

Cannabis 2.0 – The era of cannabis concentrates?

As a weed sommelier and cofounder of the cannabis education group, the Education Station, Jonathan Hirsh says his daily experience “popping people’s cannabis cherries” has shown him that concentrates are the legalization 2.0 product that will prevail over the rest.

“I’ve done this with 80 year olds down through to 20 year olds, and they are all willing to take that leap into vaping or dabbing,” said Hirsh, recently nominated for two Canadian Cannabis Awards by Lift & Co. “The only thing that people are adding in 2.0 that anyone wants is concentrates and vape pens.”

Hirsh’s opinion is reflected in the numbers coming out of the U.S.A. BDS analytics study showing that for the first time in 2018 sales of concentrates (37 percent) outdid cannabis flower (32 percent).

A 2019 report by Zion Market Research has estimated the global concentrate market will grow from USD $3.73 billion last year up to USD $13.78 billion in 2026. Grandview research is also predicting a rapid growth of 40 percent per year over the next eight years.

According to BDS analytics, the shift towards concentrates and edibles follows a common agricultural trend. Scientific progress and innovation have led to crops like corn to evolve from an every grocery staple, into becoming high fructose corn syrup, fuel, and even alcohol. 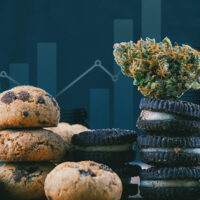 However, this growth has not come without consequence. Over 450 cases of lung injury have been reported by the Centre for Disease Control in the US as a result of using e-cigarettes with THC, four of them resulting in death. In Canada, the first case of a severe pulmonary illness associated with vaping was confirmed in Quebec by Health Canada.

The US Food and Drug Administration officials found vitamin E acetate, the oil derived from vitamin E that is most often found in skin creams, in numerous samples of cannabis oil. The molecular structure of this oil may be hazardous to inhale, and its oil-like properties could be associated with symptoms such as coughing and chest pain.

It is still unclear how much of the outbreak could be due to vitamin E acetate. This highlights the importance of having a regulated legal market that can help produce safe and untainted concentrates.

“In Colorado, we’re not experiencing any of those deaths,” said Kevin Gallagher, executive direct of the Colorado Cannabis Manufacturers Association. “That’s showing some sort of confidence within our regulated market.” Gallagher warned against that overregulation and banning of legal vape pens will leave consumers with only black market vape products. “You’re not solving the problem. In fact you’re just making it worse.”

“Manufacturers in Colorado have pumped out hundreds of millions of cartridges in the market with literally no adverse effects like those in the papers that you’re reading,” he told Westworld.com. Gallagher says that manufacturers that don’t cut corners should not run into any issues with Vitamin E.

With legalization 2.0 around the corner, I’ll be grabbing my vape pen from the regulated market. And I surely won’t be alone. Sales of vape pens increased 68 percent in 2018, with CBD vape sales, in particular, rising 105 percent.

Having a roommate with sensitive sinuses, smoking indoors was out of the question. But with a vape pen, I could smoke indoors without affecting the odour of the place. I could take it out with me without worrying about having to worry about accidentally crushing a concealed joint.

In the movie theatre, I could take a quick “toke” and toss it back in my pocket. Unlike smoking a joint, I wasn’t dedicated to smoking the whole thing. And its odour didn’t permeate my clothes. 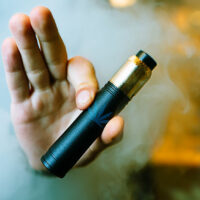 According to the journal Substance Use & Misuse, “Cannabis vapers were motivated to vape cannabis because it tastes better, is healthier, and is easier to conceal/hide, does not smell as strong, is more convenient.” These factors played a big part in my shift towards using a pen.

There are other reasons people are so rapidly dropping joints and picking up vape pens. For one, they are very efficient for those who want to feel the effects of THC quickly. Concentrated cannabis is dense, comparable to taking a shot of liquor, as opposed to sipping on a pint. And this study shows that infrequent cannabis users were getting higher from vaping weed than from smoking it.

Another reason for the proliferation of the vape pen is the global trend of moving away from smoking in general. The World Health Organization has shown a steady reduction in global smokers, just reaching over one billion. Compare that to vaporizers, where the number of users increased from seven million in 2011 to 41 million in 2018.

The Canadian Lower-Risk Cannabis Use Guidelines stated that vaporizers and edibles are a safer option for consuming cannabis than smoking. And unlike tobacco, cannabis does release anti-carcinogens. It is generally agreed, though, that more studies must take place to confirm whether cannabis smoke has any adverse long-term health effects.

Although it costs a bit more off the bat (mine set me back about USD $100), it also meant I didn’t need to buy papers, grinders, rolling trays, bongs or any of the other products one needs to smoke flower the old fashioned way.

As concentrates continue to take up a larger market share of the cannabis industry, the future of the flower retail market is unclear. Old habits die hard, and there is a sizable group of cannabis smokers that won’t be swayed by the convenience of concentrates. 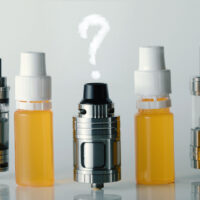 “I enjoy the taste of it. I enjoy the smoke billowing around me,” said Philip Wolfe, founder of the Cannabis Wedding Expo and Cultivating Spirits, a cannabis cuisine experience company. “Vaporizers don’t taste good, it feels harsh on my throat.”

Beyond having a taste for the traditional smoking experience, including a deep appreciation for the natural flavors of cannabinoids and terpenes, Wolfe also sees cultural value in sharing a joint.

“I believe there is a ritual aspect to (smoking) cannabis, and a spirit to using it,” he said. “When you are outside smoking joints with a colleague, there can be a unification that you bond with in that place and time.”

The ritual of sharing cannabis is prevalent in the Rastafarian movement of the 1930’s. “Reasoning Sessions” are gatherings where rastas would gather to smoke from a shared pipe, leading to sessions of group meditation and prayer. This would be followed by chants, prayers and singing, and enlightened discussions on communal issues.

Changing with the times

In her recent book, Higher Etiquette, Lizzie Post wrote about basic cannabis etiquette rules that should be followed – the first and foremost being the act of sharing. According to Post, lighting up a joint in front of a group of people implies you’ll share it, without question.

Since legalization took place in Wolfe’s home of Colorado and vape pens started to become more popular, he’s noticed fewer people offering out joints at concerts – one of his favourite places to smoke cannabis.

“It really allows my connection to the music run deeper, and I love passing my joint around to the people beside me,” said Wolfe. “People are so excited to get it, and they hand it back with a smile on their face, and all the sudden all the people around us are familiar with each other.”

The new culture emerging out of vaping and concentrates may also be shaping our individual relationship with cannabis.

“We are drawing away from that ritual type of experience when people just have vape pens in their pockets and pull it out, very unmindfully just start puffing on them, because it becomes more of a nervous habit,” said Wolfe.

And while he admits that for some, having this access to cannabis is important for medical reasons, that isn’t the case for the majority of people. “It becomes a habit where some people think they need to take this product to have a normal day.”

Hirsh agreed that vaping is a challenging form for users to connect with. “People like the activity of rolling the joint, it’s a shared experience, whereas vaping is mechanical.”

Hirsh added that the discrete nature of vaping, although convenient for many, has an adverse effect on the way cannabis is seen in society. “If you’re using it to reduce exposure of the drug, what you’re doing is creating stigma about the plant,” said Hirsh. “And I’m all about busting the stigma on the plant.”

Instagram influencer and cannabis advocate Coral Reefer said that she doesn’t think smoking cannabis is going to be as popular for newcomers to cannabis. “I think that all the other products on the market are going to be welcoming so many users that wouldn’t smoke anything anyways.”

When asked what she thinks about losing the rituals that come with smoking, she didn’t voice much concern. “I would probably form new rituals and habits with any other method if that worked best for me. But for me, smoking is quickest, the most potent, and that’s why I continue to use it.”

Looking back, when did I feel best while using Cannabis?

It actually wasn’t the times I got away with vaping in the movie theatre when no one was watching, or inconspicuously while on the way to a delicious dinner.

It was when I was outside on the patio surrounded by friendly faces, passing a joint and sharing a laugh.

Is decarboxylation necessary if you use a battery with temperature control settings for your vape pen ??